Accessibility links
High-Tech 'Band-Aids' Call Doctors A new generation of wireless medical sensors mounted on an adhesive strip can call a doctor and transmit key data when they detect a problem. But federal regulators, who want to make sure the technology is safe, have yet to iron out regulations for these devices. 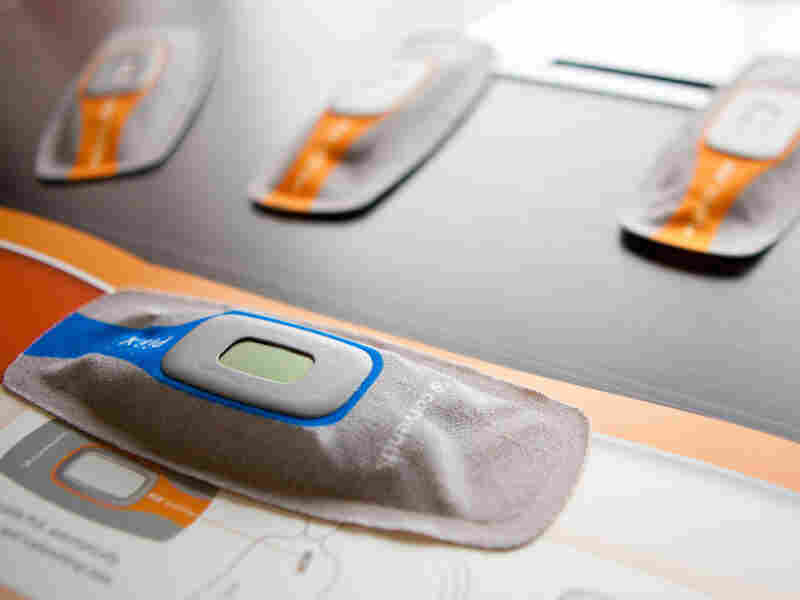 Smart bandages, including this one from Corventis, can transmit cardiac data in real time from a patient's body to a doctor. Courtesy of Mark Dastrup hide caption 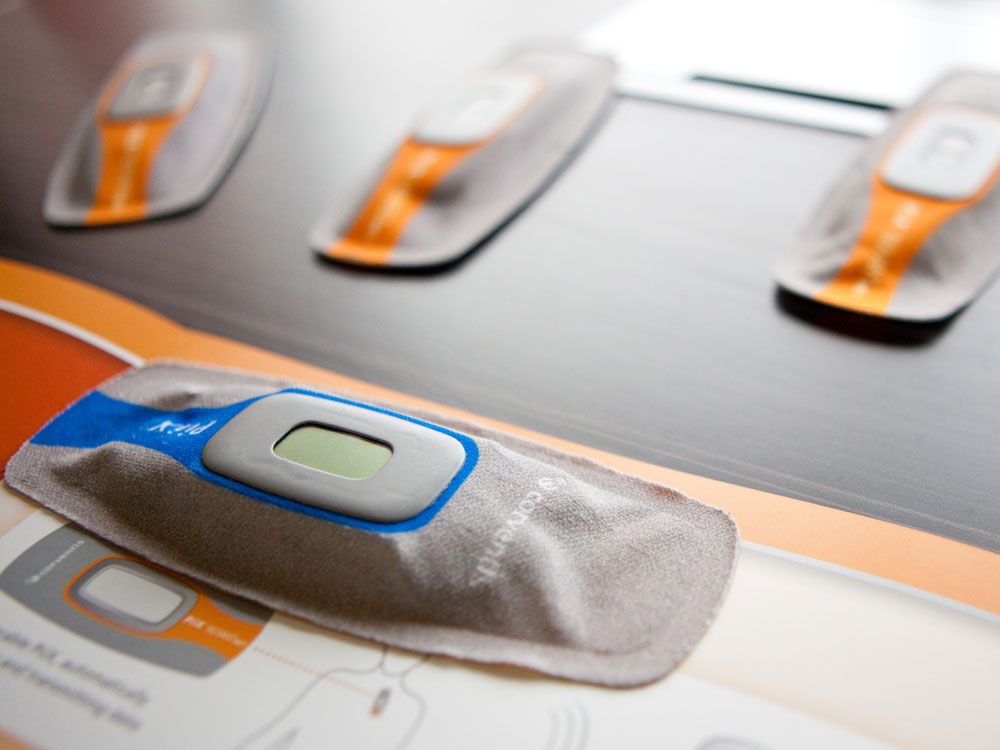 Smart bandages, including this one from Corventis, can transmit cardiac data in real time from a patient's body to a doctor.

There's a new generation of wireless medical sensors mounted on an adhesive strip. The so-called smart Band-Aid can call a doctor and transmit all kinds of physiological information when it detects a problem.

All this may eventually save lots of money, and lives. But the technology is so new that federal regulators are still figuring out exactly what kind of rules are necessary to keep the public safe.

Even though the technology is cutting edge, it builds on more than a decade of refining the practice of "remote monitoring." That's when health care providers give patients simple-to-use home diagnostic equipment that connects to a network.

A Tool For Adjusting Medications

Natalie Cole of Golden, Colo., uses a smart blood pressure cuff. She just hooks the cuff up to her arm, hits the start button and it inflates, takes a reading, and then, through her home computer's Internet connection, uploads the numbers to a secure website.

Cole can quickly and easily share her blood pressure numbers with doctors and pharmacists. She says the system has already helped her physician adjust her medication.

Stories like that have convinced Cole's HMO, Kaiser Permanente in Colorado, that networking smart medical devices in the home can improve care and save money. The Department of Veterans Affairs has been saying that for years. A recent VA study of 17,000 patients found remote monitoring cut hospitalizations by 19 percent.

Did You Take Your Pill?

Remote monitoring is poised to become a lot more common thanks to a new generation of tiny sensors that can be worn by a patient on an adhesive strip that's about the size of a large Band-Aid.

These sensors "can measure the electrocardiogram or heart rhythm, respiratory rate [and] the temperature of the patient," says Dr. Eric Topol, the chief innovation officer for the West Wireless Health Institute, a non-profit medical research institute that promotes wireless medical devices.

He says smart Band-Aids can measure dozens of health indicators and then display readings on a patient's mobile phone, or even the Internet.

Getting the information on the Web enables all kinds of potential applications. One that's in the works is aimed at the problem physicians call noncompliance, which means when patients don't take their pills.

Dr. George Savage's Silicon Valley start-up company, Proteus Biomedical, is developing tiny microchips that can be embedded in pills. "What we've managed to do is create a tiny, grain-of-sand-sized integrated circuit, which is coated with essential minerals, and when swallowed those different minerals generate a small amount of power -- a little voltage," Savage says.

That voltage can be detected on the skin by a smart Band-Aid. It could literally text Savage, confirming his mother actually swallowed her pills.

That kind of technology scares some people, and there's concern that it's all getting ahead of public safety. Federal regulators are still wrestling with who's responsible for approving the new generation of mobile health devices.

"There is a little bit of a gray area, and that's part of the reason we're stepping up our collaboration," says Julius Knapp, the Federal Communications Commission's deputy chief of engineering technology. The FCC is collaborating with the Food and Drug Administration to write new rules for the wireless medical industry. That's slowing the release of some products for which there's already demand. But Knapp says that delay is OK.

"Where we need to make sure that there's reliable operation is where we may, for example, be monitoring critical, life-sustaining functions," or perhaps even controlling treatment remotely, he says.

An example would be a wirelessly controlled insulin pump for diabetics. It could release exactly the right amount of insulin to keep someone healthy, based on readings sent to it by a smart Band-Aid. But if there's radio interference or some other glitch with either the patch or the pump, there could be serious health consequences.

Knapp says the agencies want to open the door to the promise of the new technology, but only if it doesn't jeopardize peoples' lives.

How A New 747 Could Get Between You And Your Doctor
Tiny Eye Telescope Brings Back A World Of Sight July 25, 2010