Accessibility links
Reports of Squalid Conditions at New Orleans Prison Former inmates at the House of Detention at Orleans Parish Prison report that conditions are not fit for humans, even two years after Hurricane Katrina hit the city. 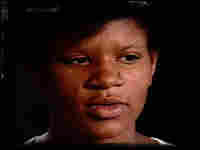 A teenage girl identified only as "Ashley" was held in a youth detention center as a runaway. She was 13. During Hurricane Katrina, she told the ACLU, she was taken to an adult prison and abandoned there. Courtesy ACLU hide caption

Since Hurricane Katrina hit the Gulf Coast, some parts of New Orleans have made a steady recovery, while others have not. The House of Detention at the Orleans Parish Prison is in the latter category.

Former inmates and outside observers report conditions there that are not fit for humans, even two years after the storm.

Sam Offenberg stands outside the Orleans Parish Prison on one August afternoon when the air is so thick and hot, it's like breathing gumbo. Offenberg, a volunteer with the group Common Ground, is sweating through his plaid shirt, waiting to interview former inmates as they are released. He comes at least once a week with a stack of questionnaires that ask about life in the prison.

"The first answer when I ask how the treatment and conditions are inside the prison, it's usually, 'It's expletive, expletive, absolutely messed up. It's like worse than any other jail I've ever imagined.' That's the standard answer," Offenberg says.

The prison flooded during the storm, and visitors can still see the evidence.

"If you walk around this area right now, you can tell that things have not recovered since the flood. There's a building right there that's like fallen down in crumbles," Offenberg says. "The flood line is still on this building over here; it's on the bricks. You can see where the toxic waste was floating against the bricks."

Inmates say they come out with respiratory problems. They describe black mold on the walls. Offenberg says that if the reports were isolated or conflicting, he might not believe them. But he hears the same stories from dozens of inmates.

After an hour in the New Orleans sun, nobody has come out who is willing to talk. But at a dinner for the homeless later that evening, several people have had recent experiences in the infamous House of Detention.

Frank Anthony Marrin got out of prison a week ago after being held on a trespassing charge. He says 20 men were kept in cells built for 10, and murderers and drunks were all mixed together. He says there was no air conditioning.

"You got to step all on people all on the floor, and it's hot," Marrin says, tiptoeing up and down across the ground to demonstrate stepping over people. "If you ain't got a mat, you got to lay on the cold floor."

He says fights broke out regularly, but guards wouldn't intervene. And, Marrin says, there were poisonous spiders. He lifts up his shirt to reveal a yellow-colored spider bite about the size of a quarter that looks infected.

The Orleans Parish Prison has had problems for a long time. A group of inmates filed a class-action lawsuit against the jail in 1969. Almost 40 years later, that suit is still not resolved. Eric Balaban, a senior staff counsel with the National Prison Project of the American Civil Liberties Union, inherited the case in the late 1980s.

His group is releasing a report Monday on the Orleans Parish Prison that documents many of the same problems uncovered by NPR's investigation — and some that are even worse. One man in the report went blind because prison guards denied him medication. The report describes a 58-year-old Vietnam veteran who was beaten nearly to death by another detainee last month. Balaban says the prison is one of the worst in the country.

"Every responsible jailer will tell you that if there is a complaint that raises these kinds of serious allegations, they should be investigated to the fullest and the truth should be found," Balaban says.

So far, there is no evidence that the man in charge of Orleans Parish Prison has done any such investigation.

"The ACLU has requested from the sheriff all documentation regarding independent audits and investigation of conditions. We haven't received a response from the sheriff to date," Balaban says.

Sheriff Marlin Gusman, who runs the prison, also refused NPR's request for an interview and tour of the facility, even after hearing detailed descriptions of the allegations.

It's hard to compare misery, but by all accounts, some of the most tragic stories come out of the prison's 10th floor — the psychiatric ward.

Helen Bell's grandson, who is schizophrenic, was in the prison for about two years, held on a drug charge. Behind bars, Tevis Meggs' condition started getting worse. He heard voices and didn't trust anyone. He thought a chip had been implanted in his stomach.

When his grandmother tried to explain that wasn't true, he accused her of plotting against him. Bell went to court to try to force the prison staff to give her grandson better medical treatment.

"The psychiatrist got up on the stand and testified that they wasn't giving him any kind of medications," Bell says.

She went to the court week after week with no success. Every time, her grandson showed up looking worse. His hair grew long. Once, he jumped up and started swearing in court. Eventually, he stopped recognizing his family.

"He would look at us, but no kind of connection," she says.

The judge finally said Bell's grandson could go to a state mental institution when a bed opened up. But since Katrina, there are fewer beds than ever. His name went on a waiting list. In the meantime, he stayed in the prison without medicine.

Unlike many of the stories out of Orleans Parish Prison, this one has a happy ending. A few weeks ago, Bell's grandson was sent to a mental institution in Jackson, La. He's on medication now and has gotten a haircut. He called his grandmother and told her he loves her.

"He spent two years in prison, and to say today that Tevis is doing fine, words can't — I can't even — it is such a joy," Bell says.

Bell accepts that her grandson needed to spend time in prison. He broke a law.

"But you don't get them in there and treat them like dogs, like animals," Bell says. "They're still human beings. They're not just a number you put on them. They are people that live and breathe."

Bell says some employees at the prison tried to help her grandson, but many others did not. And she doesn't know how they sleep at night.