Accessibility links
BP To Delay Key Test Ahead Of 'Static Kill' Energy giant BP said Monday that a key test planned ahead of the "static kill" procedure -- the first of two steps intended to seal the ruptured Gulf of Mexico well for good -- was postponed on Monday. Crews hope to begin the test later Tuesday.

BP To Delay Key Test Ahead Of 'Static Kill'

BP To Delay Key Test Ahead Of 'Static Kill' 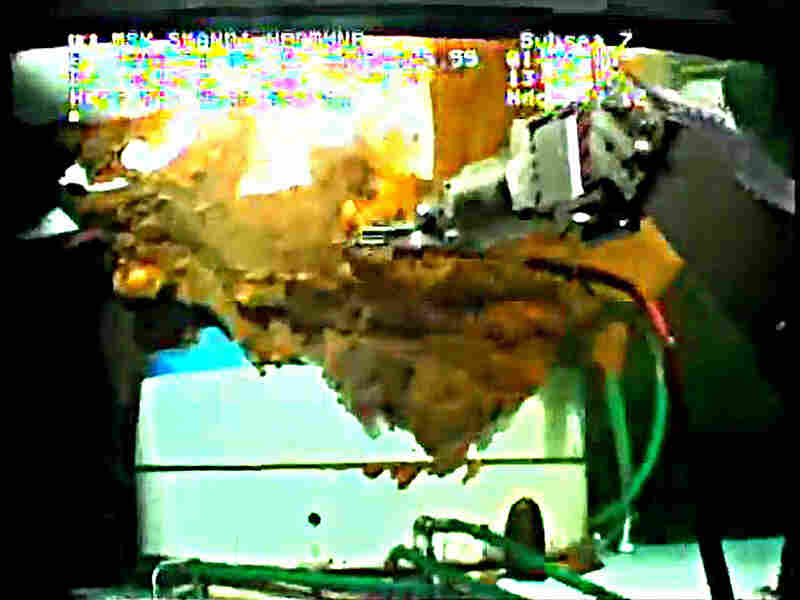 A robotic arm from a submersible works around the leaking Gulf of Mexico wellhead in this still image from a live BP video feed. AFP/Getty Images hide caption 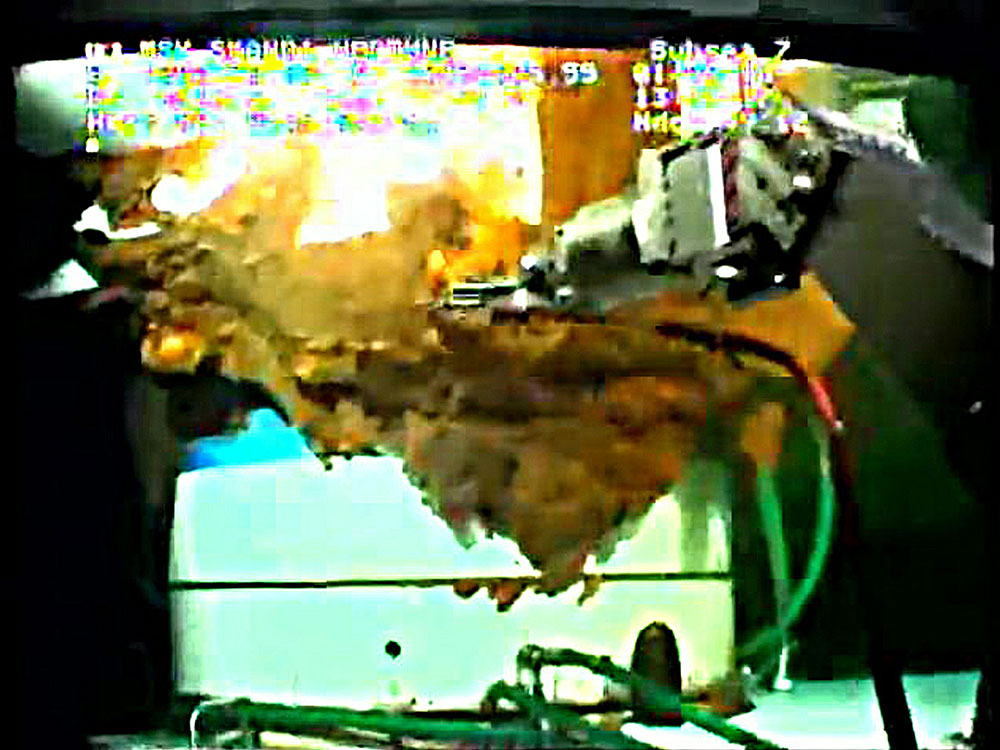 A robotic arm from a submersible works around the leaking Gulf of Mexico wellhead in this still image from a live BP video feed.

Energy giant BP said Monday that a key test planned ahead of the "static kill" procedure -- the first of two steps intended to seal the ruptured Gulf of Mexico well for good -- will be postponed "possibly" until Tuesday.

"It is anticipated that the injectivity test and possibly the static kill will take place Tuesday."

Also Monday, the federal government said 4.9 million barrels of oil -- plus or minus 10 percent -- flowed out of the well before it was capped last month. Previous government figures were between 3 million and 5.2 million barrels. New pressure readings from inside the well cap allowed federal scientists to refine that estimate.

Earlier Monday, Kent Wells, senior vice president for BP, said crews were testing the well to determine whether it can handle the static kill, in which mud will be injected into the well. The procedure was expected Tuesday.

The mud and possibly cement would be pumped into the top of the wellhead, forcing the crude back down into the mile-deep underground reservoir. The well, which began gushing oil in late April, was sealed with a temporary cap three months later.

If all goes according to plan, engineers would then move to plug the well at both ends by pumping in more mud and cement through a relief well more than 10,000 feet below the surface. Retired Coast Guard Adm. Thad Allen, Washington's point man on the spill, said the "bottom kill" procedure could happen in five to seven days.

When the static kill begins, crews will slowly pump the heavy mud through lines installed last month. If the mud forces the oil back into the reservoir and scientists are confident the pressure remains stable, then engineers can pump in fresh cement to seal it.

BP tried a similar process, called a top kill, to choke the well with mud in May. It failed.

Part of the urgency of the static kill procedure comes from concern that the Gulf hurricane season could bring more violent storms that could disrupt the cleanup. 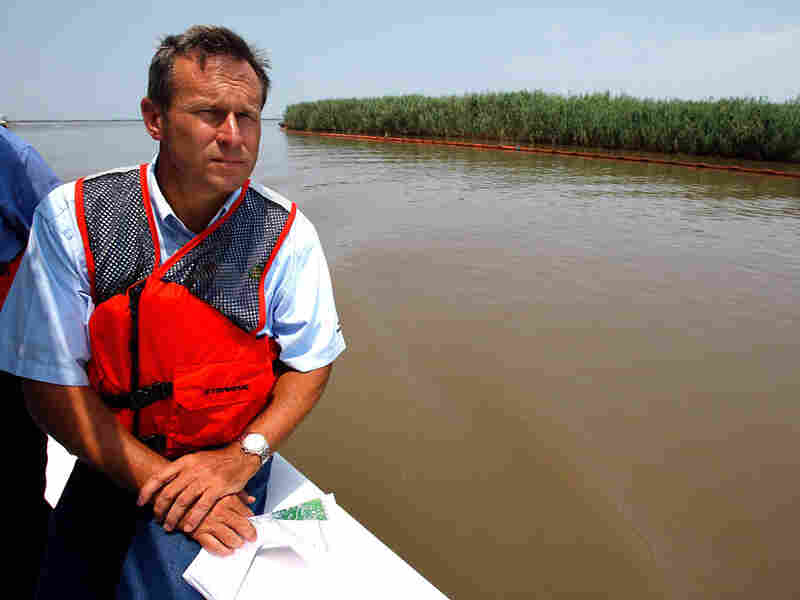 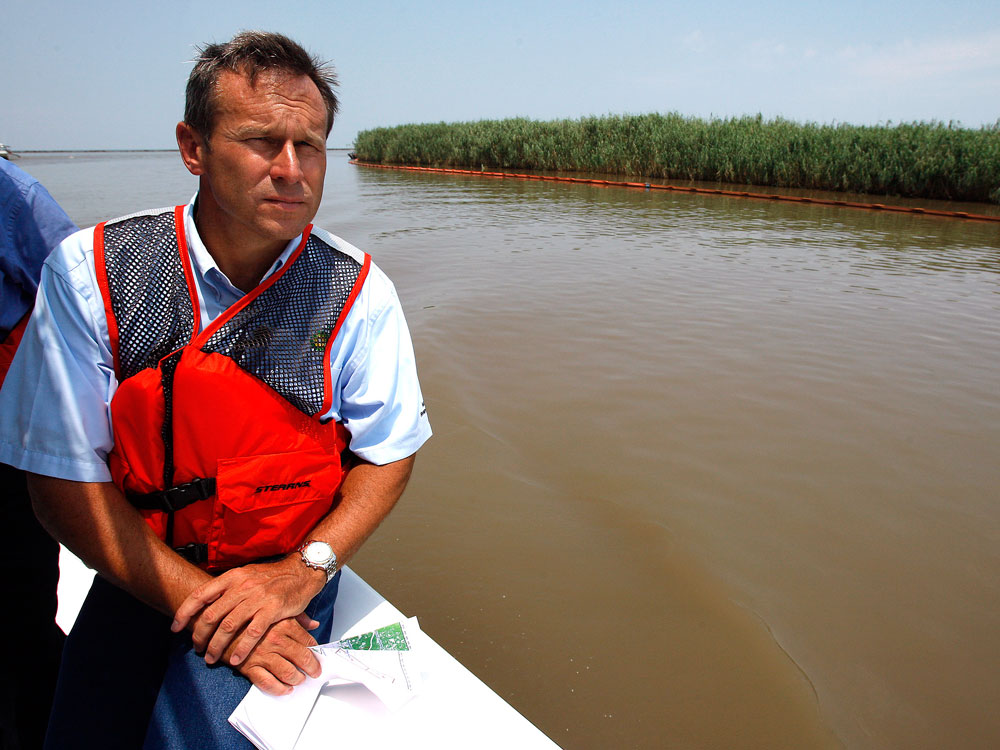 BP Chief Operating Officer Doug Suttles took reporters on a boat tour of the mouth of the Mississippi River on Sunday.

"If we can get this thing shut in permanently before the August hurricane season, we will have dodged a huge bullet," said Rear Adm. Paul Zukunft, the government's on-scene coordinator.

The National Hurricane Center reported Monday that a tropical depression had formed in the Atlantic Ocean far from the oil spill site. As the system moves westward, it was expected to strengthen in the next 48 hours and could be a tropical storm by Monday night or Tuesday.

The Environmental Protection Agency on Monday moved to allay concern over the heavy use of dispersants to break up the massive oil slicks. The chemicals apparently drove the oil below the surface, making it harder to reach, and critics fear that the dispersant could poison ocean life and taint seafood from the Gulf.

The EPA said tests show that when the main dispersant, Corexit 9500A, is mixed with oil it is no more or less toxic than alternative chemicals.

On Friday, Louisiana wildlife officials reopened state waters east of the Mississippi to shrimping and catching "fin fish" such as redfish, mullet and trout after the Food and Drug Administration said tests of specimens in the area showed barely traceable amounts of toxins.

Suttles, who took reporters on a boat tour of the mouth of the Mississippi River on Sunday, said he would eat Gulf seafood and "would serve it to my family."

"There's been a tremendous amount of testing done by NOAA and the state agencies and the FDA and others, and they're not going to open these waters to sport fishing or any fishing if it's not safe to eat the fish," he said.

Suttles acknowledged that the oil is below the surface but said that no one knows exactly where. Water samples are being collected, and absorbent boom is being laid in an attempt to find the crude, he said.

Congressional investigators said Saturday that the Coast Guard routinely approved BP requests to use thousands of gallons of chemicals a day despite a federal directive to cut usage.

Allen said Sunday that federal regulators did not ignore environmental guidelines. Rather, he said, some field commanders were given the authority to allow more dispersants to be used on a case-by-case basis.

NPR's Allison Keyes and Richard Harris contributed to this report.

Picture Show: Portraits From The Gulf
By Hiring Gulf Scientists, BP May Be Buying Silence July 31, 2010