Accessibility links
In Spain, A Crusading Judge Opens Old Wounds More than 100,000 people were executed or went missing during the reign of Spain's Francisco Franco. Judge Baltasar Garzon has been suspended and faces prosecution for opening a probe into the Franco-era atrocities, challenging an amnesty law known as the "pact of forgetting." Not all Spaniards embrace his approach to justice. 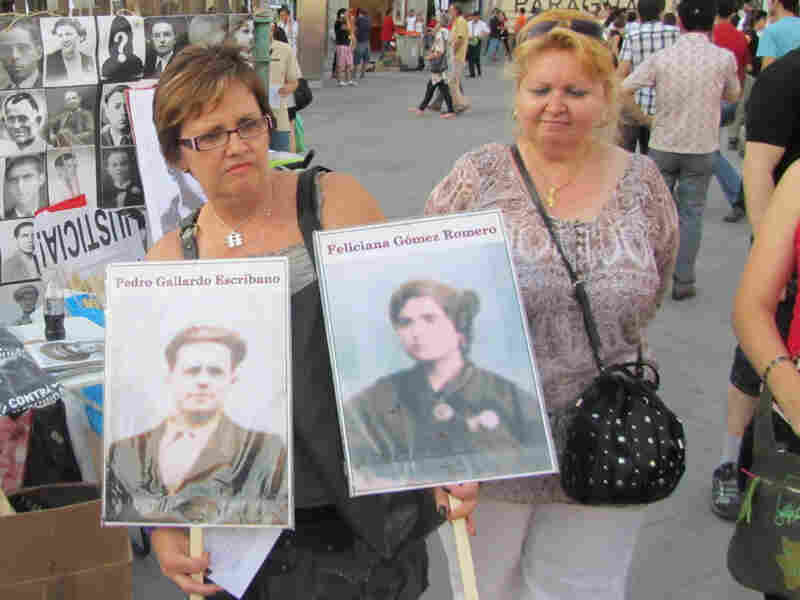 Puri Galano holds photos of her grandparents, who disappeared in 1940 -- a year after the end of the Spain's civil war. Sylvia Poggioli/NPR hide caption 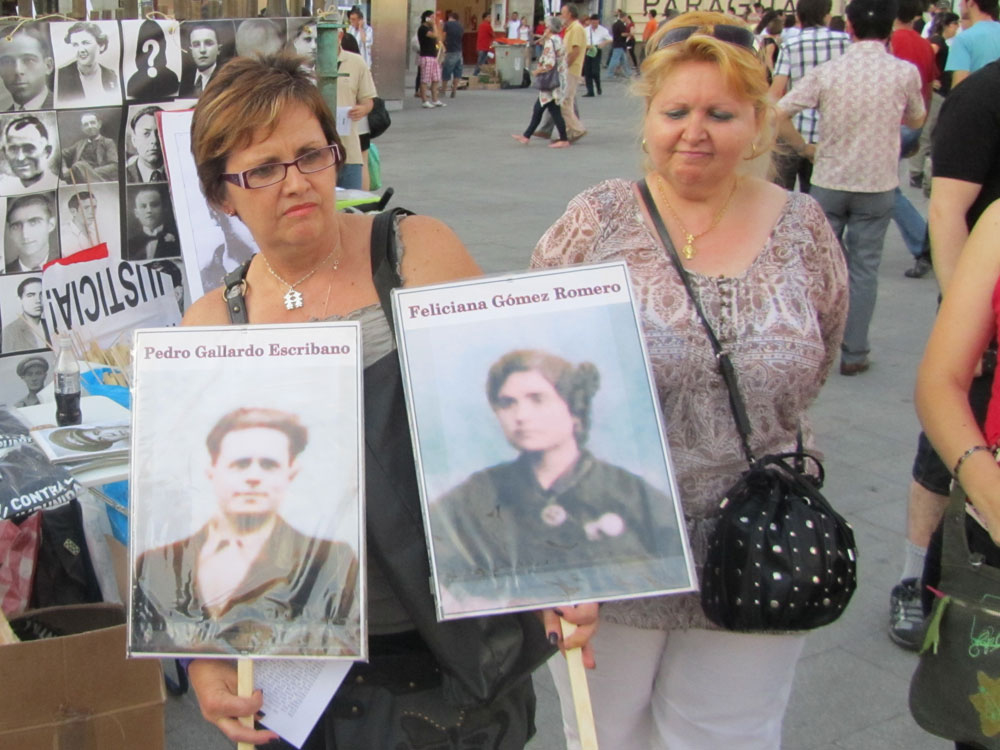 Puri Galano holds photos of her grandparents, who disappeared in 1940 -- a year after the end of the Spain's civil war.

The wounds of the past are re-emerging, 70 years after a brutal civil war brought Spanish dictator Francisco Franco to power. Relatives of the more than 100,000 people who were executed or went missing during Franco's reign are demanding justice.

A Spanish investigating judge, Baltazar Garzon, opened a probe into Franco-era atrocities by challenging an amnesty law that protects executioners. For his efforts, Garzon is now facing prosecution and has been suspended.

The Spanish Supreme Court charged Garzon with abuse of power for his role in the first in-depth probe into the Franco regime. He is accused of knowingly violating the 1977 amnesty law passed two years after Franco died. Known as the "pact of forgetting," the law was an attempt to put the past behind and concentrate on the future.

To protest Garzon's suspension, 15 famous Spaniards joined forces to produce a video. During the 10-minute video, the Spaniards recite the testimony of 15 ordinary men and women killed during Spain's civil war and the 36 years of dictatorship.

Among those killed were shop owners, teachers, farmers, women not married in church and people on the losing side of the war. Their remains are believed to be buried in mass graves.

The video begins with Spanish film director Pedro Almodovar, who gives voice to Virgilio Leret Ruiz: "I was the first person executed in the civil war. I had no trial, no lawyer and no sentence. My daughters continue to look for me. For how long?" Ruiz was a Spanish pilot who refused to support the military coup in 1936. 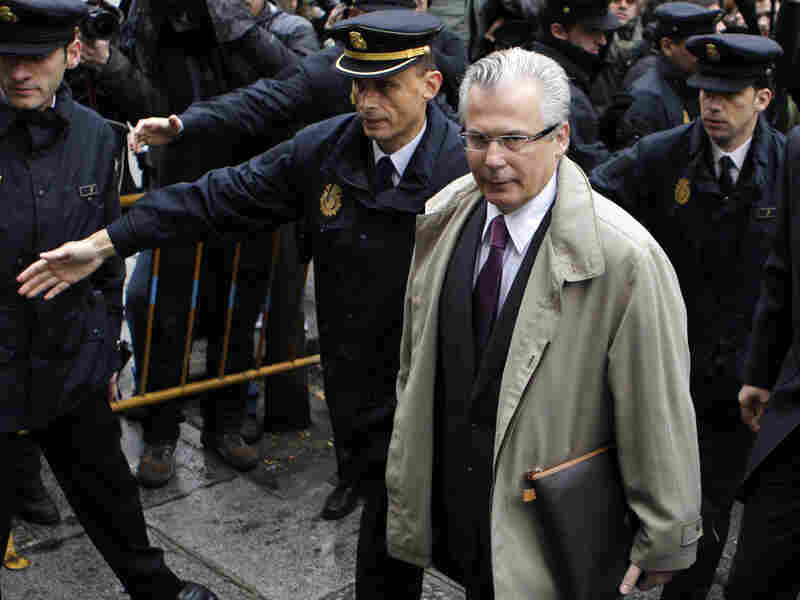 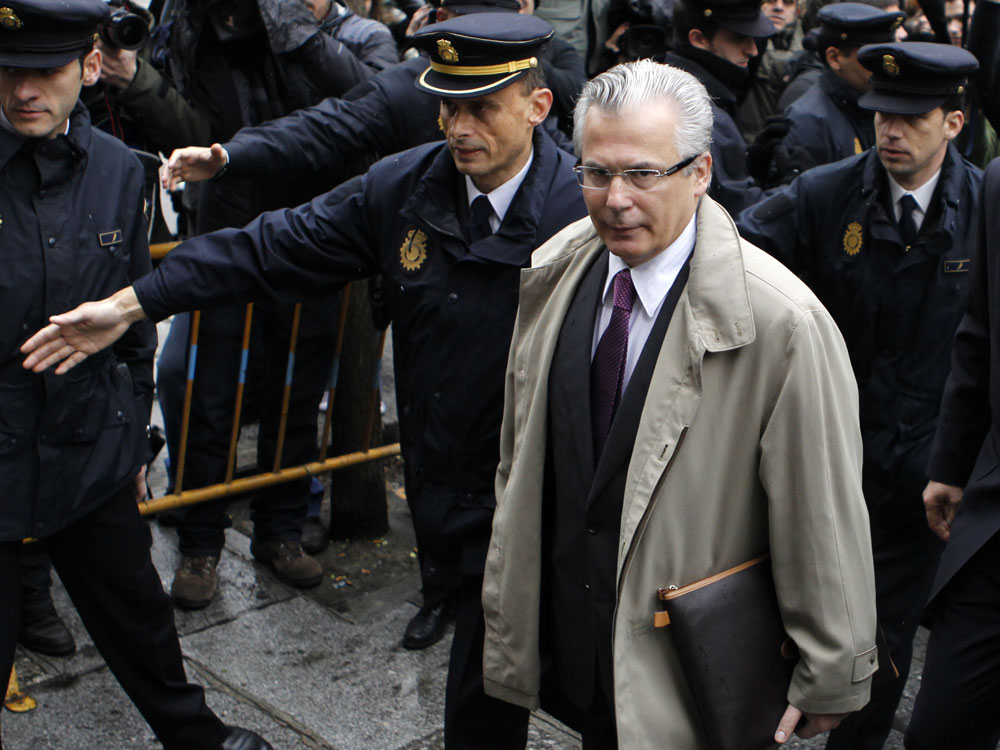 Spanish Judge Baltasar Garzon arrives at the Supreme Court in Madrid on April 15. Garzon has been suspended and faces prosecution for opening an investigation into Franco-era atrocities. The Spanish Supreme Court says Garzon violated a 1977 amnesty law.

Each testimony is followed by a barrage of rifle shots.

Garzon is a champion of universal jurisdiction, the concept that crimes against humanity cannot be subject to amnesty or statutes of limitations. He spoke recently at the 16th anniversary of the bombing of the Jewish Community Center in Buenos Aires, which killed 85 people.

More than anyone else, he said, investigating judges cannot shirk their responsibilities.

"The one who had the resources in his hands and didn't use them," he said, "the one who could have demanded and didn't, should not be able to escape -- regardless of time -- his legal and civil responsibilities. Never again."

Garzon shot to fame for having Chilean dictator Augusto Pinochet arrested while he was visiting London in 1998.

He has pursued al-Qaida and Basque terrorists, corrupt politicians and gangsters, as well as members of the Argentine military junta that executed tens of thousands of opponents.

"He cannot prosecute Francoism. It's already history, and only historians can judge that period. He uses justice for his own ego. He thought that, by prosecuting Francoism, he could become the head of the International Criminal Court and even win the Nobel Peace Prize," Bernard says. 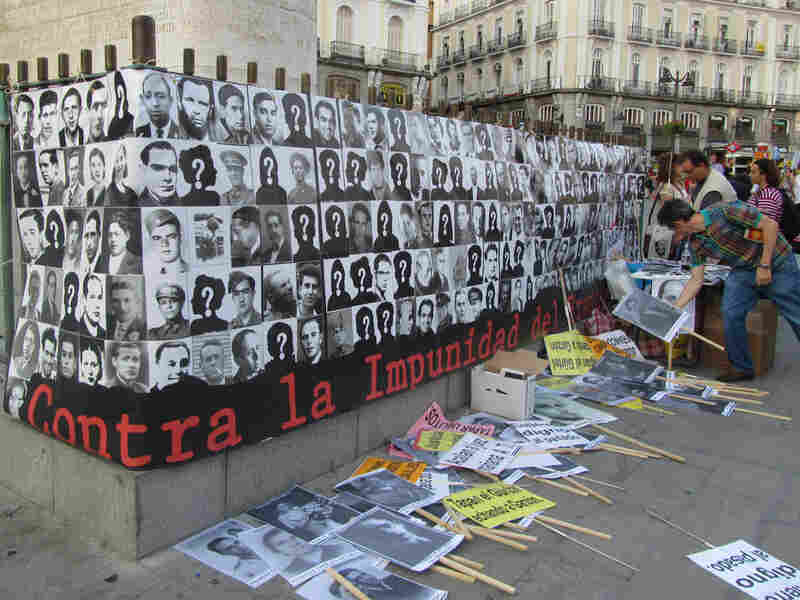 A banner displays photos of victims during the Franco era who were executed or went missing. Sylvia Poggioli/NPR hide caption 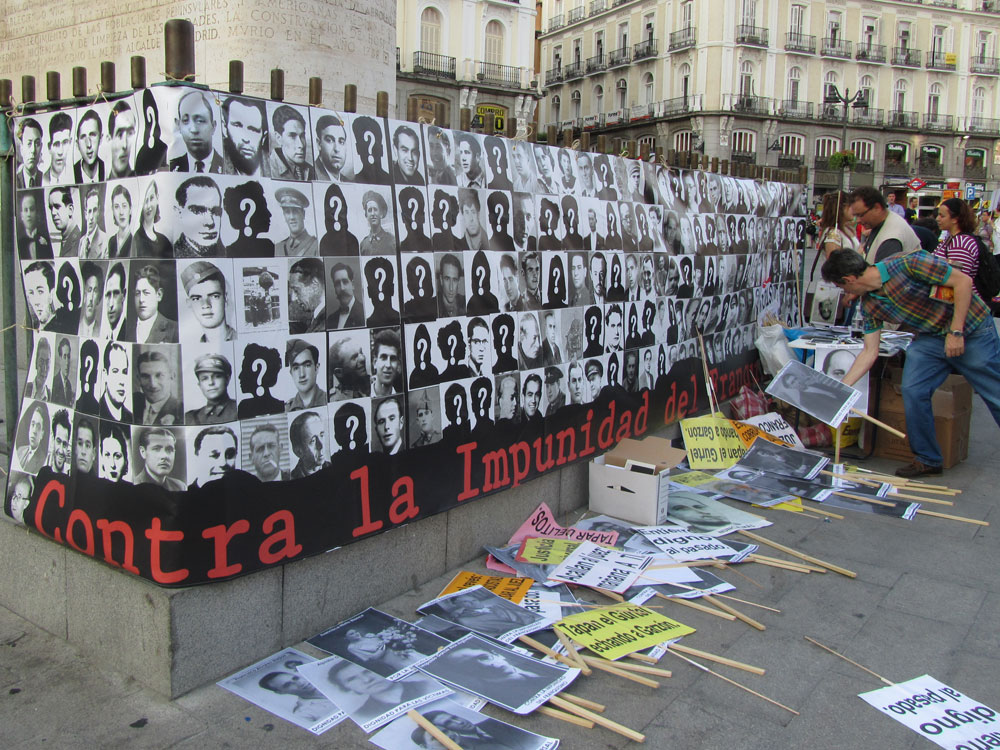 A banner displays photos of victims during the Franco era who were executed or went missing.

Rival Protests On The Streets

Garzon's suspension has triggered a wave of protests throughout Spain, with thousands taking to the streets in many towns and cities.

Every week in Madrid, several hundred relatives of the victims gather in a central square across from the building that was used by Franco's secret police to detain and torture opponents. They carry photographs of some of the 113,000 missing Spaniards -- including poet Federico Garcia Lorca.

But their vocal demand for truth and justice shows that Spanish society is still sharply divided.

One evening in July, a small group of bystanders started to provoke the marchers. The marchers responded by calling the bystanders fascists and terrorists.

Nearby, Juan Diego Boto, a young actor, responded: "What we are demanding is quite simple: just justice, not revenge -- far from it, just simply justice."

Boto wants the Spanish government to open up all of the mass graves and identify the bodies.

Puri Galano marched with a photograph of her grandparents, who disappeared in 1940 -- one year after the end of the civil war. She says the move against Garzon has energized the movement to account for the tens of thousands killed by the Franco regime.

"All we wanted before Garzon got put out was to recover our families and to clean their names," Galano says. "He helped us to uncover the whole thing."

If convicted, Garzon could face suspension for 20 years, virtually ending his career.