Accessibility links
Mexico's Drug Cartels Use Force To Silence Media Covering the drug beat is dangerous. In some parts of the country, reports about drug-related crime simply do not appear in newspapers or on news broadcasts. Reporters have been abducted and killed and their families threatened. 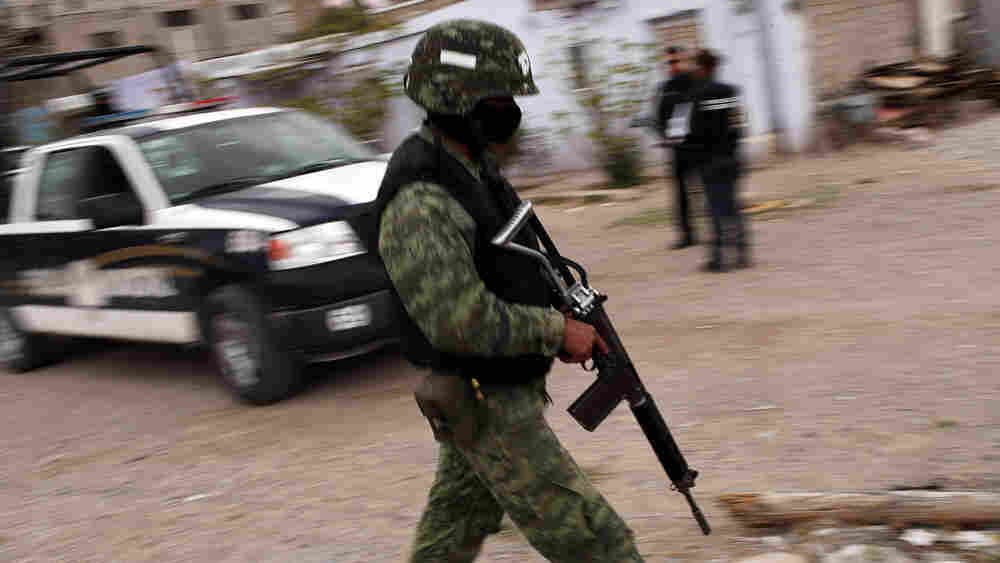 A military police officer patrols at the scene of a murder in Juarez, Mexico, in March. Spencer Platt/Getty Images hide caption 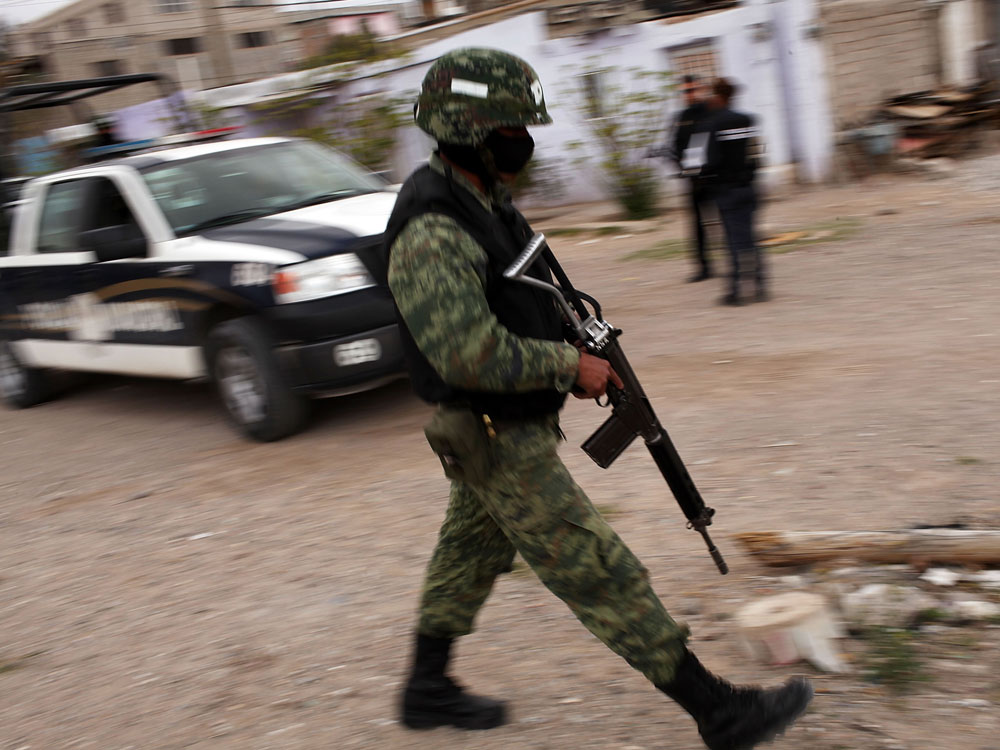 A military police officer patrols at the scene of a murder in Juarez, Mexico, in March.

Mexico has become one of the most dangerous countries in the world for journalists. So far this year, eight reporters have been gunned down. Last week, five were reported kidnapped -- four of them in Durango state and one in Zacatecas state.

Some 25,000 people have been killed over the last 3 1/2 years in drug-related violence.

Unbiased information has also been a casualty.

Journalists in some parts of the country have stopped covering the drug trade entirely after their colleagues have been kidnapped, killed or threatened. Others say they have limited reporting on crime to only what is in official government press releases. Some even say they report whatever the local cartels order them to print.

"This record level of violence is really unprecedented," says Carlos Lauria, head of the Americas program at the Committee to Protect Journalists.

By the organization's tally, more than 30 Mexican reporters have been killed or have disappeared since President Felipe Calderon declared war on the drug cartels in December 2006.

"We only see these numbers (of murdered journalists) in conflict ridden countries like Iraq and Somalia," Lauria says.

They tried to intimidate and say to me, 'You don't love your family? ... So think about your family when you are going to write this, because we know where your family lives.'

a Mexican journalist describing threats from a drug cartel

He adds that the Mexican drug cartels have intimidated or corrupted the media to the point where in some parts of the country crime coverage has disappeared entirely.

As an example, he points to a wave of violence that occurred around the border city of Reynosa in late February. The Zetas were battling their former bosses the Gulf cartel for control of the northeastern state of Tamaulipas.

Running street battles between gunmen with heavy weapons went on for days causing hundreds of deaths, Lauria says. "And there was not a single line about this wave of violence, not a single report on the radio or television that accounted for all these execution style murders," he adds.

One of the first media reports of the carnage appeared outside of Mexico in The Dallas Morning News. The Texas paper quoted sources saying more than 200 people had been killed in a 14-day period.

An editor at a daily newspaper in Tamaulipas says the Zetas essentially are the editors of the press in the state.

Where The Cartels Are

"They have a connection with the reporters who cover the police beat. And through them the Zetas send word on what they want and don't want to be published," says the editor, who asked that her name not be used because of concern for her safety.

The Zetas are one of the most brutal drug gangs in Mexico. They were founded in the late 1990's by a group of Mexican special forces soldiers who defected to work for the Gulf cartel. They served as the enforcers for the Gulf organization until recently when they broke loose on their own.

"We live in fear," the editor says. "Some very small thing can be misinterpreted by the Zetas. You can have a strong story with a strong source where all the facts are verified, but they don't care. And in the end they go after the messengers, after the media, after the reporters."

And little things can anger the drug cartels. For instance, she says, they get very upset when the papers use the words "organized crime."

At times, the editor says, you simply can't print the truth.

The immense majority of these killings are left unsolved.

"We are threatened. It's sad," she says. "All we can do is look after our family and the people we know and tell them to be careful."

Journalists in the border city of Juarez make a point of not being the first ones to show up at massacre sites in case the killing is not yet finished.

Reporters in some parts of the country say the cartels let them know that they are being watched, read and listened to.

A reporter in northern Mexico says he was told directly by members of one gang that he would be killed if he reported an incident he had been filming. "I have never been in a situation like we are living right now," he says.

The reporter says he loves his job and he wants to write about what is happening with the drug war around him. But he can't.

He says the criminals made it very clear what would happen to him if he didn't play by their rules.

"They tried to intimidate and say to me, 'You don't love your family? ... So think about your family when you are going to write this, because we know where your family lives.' They know all about us." 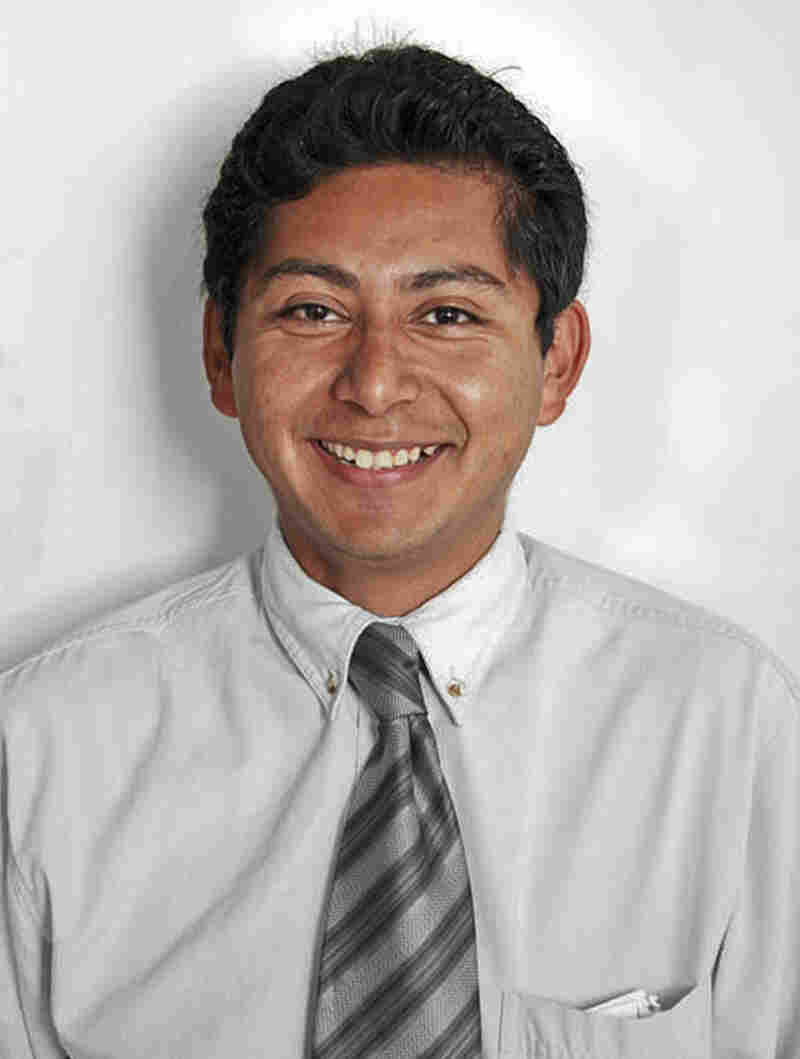 Undated picture of Mexican journalist Valentin Valdes Espinosa, who was kidnapped and killed in January in the state of Coahuila. A note found with his tortured body said, "This will happen to anybody who doesn't understand." Zocalo de Saltillo/AFP/Getty Images hide caption

They told him that he had been warned and that there would be no second warning.

Many Mexican journalists haven't been so lucky.

Valentin Valdes Espinosa, a newspaper reporter at Zocalo de Saltillo, was found shot to death outside a motel in the state of Coahuila in January. A note dumped with his tortured body said, "This will happen to anybody who doesn't understand."

Other journalists have been killed this year in Acapulco, Sinaloa, Juarez, Durango and Michoacan.

"Never have we seen threats at such an extreme level from organized crime as we've seen in the last 2 or 3 years," says Gerardo Albarran, a reporter at the weekly national news magazine Proceso.

Albarran is also with the Center for Journalism and Public Ethics, a media advocacy group in Mexico City that tracks threats and violence against reporters.

He says that the cartels have come to completely dominate the press in some areas of Mexico. When crime stories do appear, particularly in the north of the country, they tend to stick to just the facts lifted from police reports and are routinely published without bylines.

Every day in Mexico, Albarran says, reporters and editors wrestle with what they can and cannot write.

In some parts of Mexico, Albarran says residents have a war raging around them complete with grenades and cartel members setting up their own road blocks in the streets, yet the local media are reporting on weddings, quinceaneras and fender benders.

There is no protection for journalists. "The immense majority of these killings are left unsolved," he says. Like most murders in Mexico, they go uninvestigated thus granting impunity to the killers.