Accessibility links
'Packing For Mars' And The Weightless Life A manned mission to Mars would take a minimum of two years from lift off to homecoming, but the most difficult engineering problem isn't how we get there; it's what we do once we're on our way. Mary Roach, author of Packing For Mars, explains why we can't take beer into space and other challenges of space travel.

Listen
'Packing For Mars' And The Weightless Life 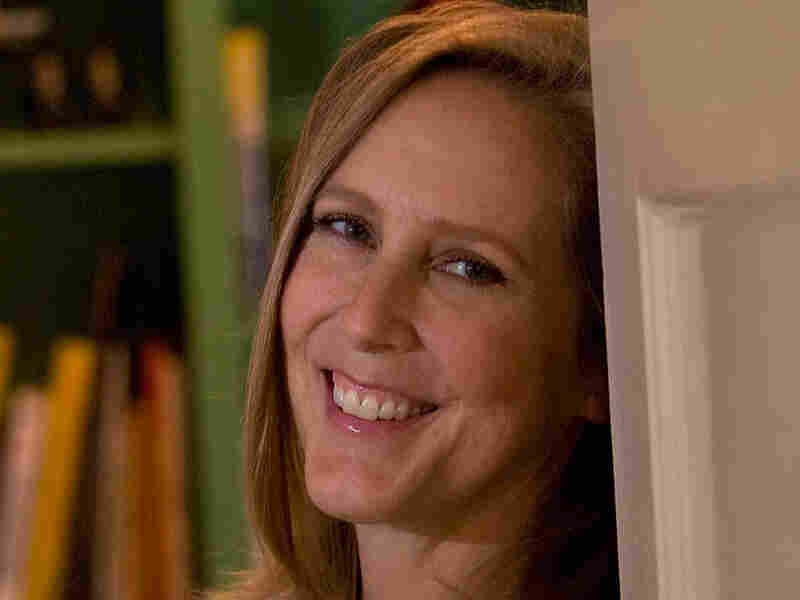 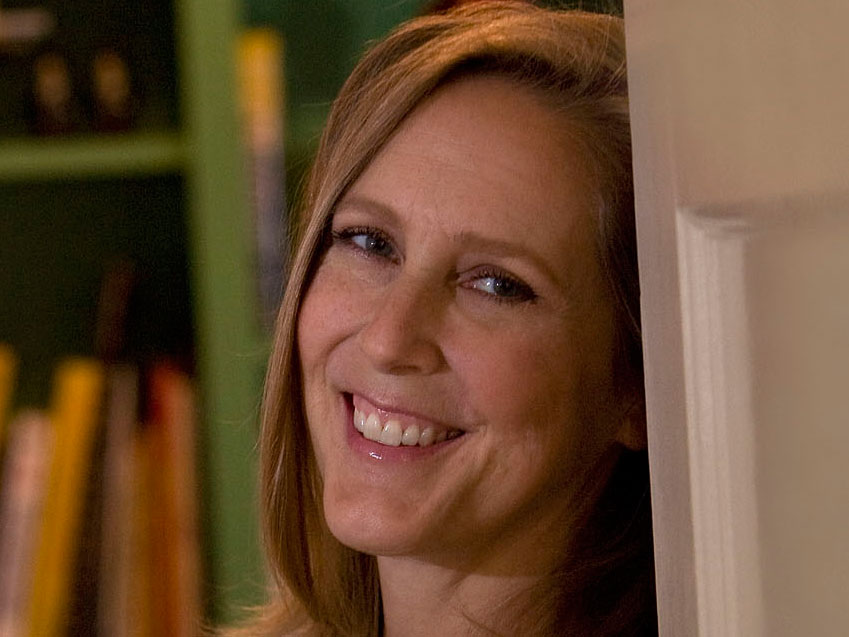 Mary Roach is also the author of Spook, Bonk and Stiff.

A mission to land humans on Mars would take a minimum of two years from lift off to homecoming, but the most difficult engineering problem isn't how we get there; it's what we do once we're on our way.

In her book Packing For Mars, Mary Roach writes about the challenges of sending the glitch-prone human body into space.

"Particularly with a long-term mission," she says, "you have a tremendous amount of bone loss."

Experts estimate that on a Mars mission, astronauts would lose one-third to one-half of their bone mass. 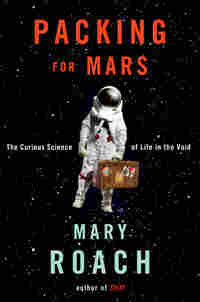 "That's similar to if you went into a wheelchair," Roach says. "It's a serious consideration."

The psychological challenges of space travel are also considerable because simple acts like eating, crossing the room or going to the bathroom can suddenly become incredibly difficult.

"These astronauts are the most high-achieving people in the world," Roach says, "and you kind of have to send them back to preschool, because they have to re-learn everything."

Boredom is another serious factor because of the length of missions, as we've learned from astronauts who spent time on the Mir Space Station or the International Space Station.

"The scenery doesn't change, you can't go out for a walk," Roach says. "The repetitiveness and the lack of color just begins to seem mundane."

Of course, tedium is less of a problem on shuttle flights when there's much to be done. For those times when there isn't much to do, some members of the space community are pushing for beer in space -- but carbonation can be tricky.

"The gas bubbles don't rise to the surface as they do in a glass on earth," Roach explains. "They tend to just foam around and froth in the middle."

And in the human stomach, if gas bubbles don't rise to the top, then astronauts can't burp. According to Roach, "it's very uncomfortable."

She would know. As part of her research, Roach flew aboard the "vomit comet," NASA's zero gravity flying laboratory.

"It was an extraordinary experience, because you have no weight, and all of your organs have no weight," she says. "It's this wonderful physical euphoria."

Needless to say, she'd love to try it again.

Packing For Mars: The Curious Science Of Life In The Void

Of the millions of pages of documents and reports generated by the first moon landing, none is more telling, to me anyway, than an eleven-page paper presented at the twenty-sixth annual meeting of the North American Vexillological Association. Vexillology is the study of flags, not the study of vexing things, but in this case, either would fit. The paper is entitled "Where No Flag Has Gone Before: Political and Technical Aspects of Placing a Flag on the Moon."

It began with meetings, five months before the Apollo 11 launch. The newly formed Committee on Symbolic Activities for the First Lunar Landing gathered to debate the appropriateness of planting a flag on the moon. The Outer Space Treaty, of which the United States is a signer, prohibits claims of sovereignty upon celestial bodies. Was it possible to plant a flag without appearing to be, as one committee member put it, "taking possession of the moon"? A telegenically inferior plan to use a boxed set of miniature flags of all nations was considered and rejected. The flag would fly.

But not without help from the NASA Technical Services Division. A flag doesn't fly without wind. The moon has no atmosphere to speak of, and thus no wind. And though it has only about a sixth the gravity of Earth, that is enough to bring a flag down in an inglorious droop. So a crossbar was hinged to the pole and a hem sewn along the top of the flag. Now the Stars and Stripes would appear to be flying in a brisk wind -- convincingly enough to prompt decades of moon hoax jabber -- though in fact it was hanging, less a flag than a diminutive patriotic curtain.

Challenges remained. How do you fit a flagpole into the cramped, overpacked confines of a Lunar Module? Engineers were sent off to design a collapsible pole and crossbar. Even then, there wasn't room. The Lunar Flag Assembly -- as flag, pole, and crossbar had inevitably come to be known -- would have to be mounted on the outside of the lander. But this meant it would have to withstand the 2,000-degree Fahrenheit heat generated by the nearby descent engine. Tests were undertaken. The flag melted at 300 degrees. The Structures and Mechanics Division was called in, and a protective case was fashioned from layers of aluminum, steel, and Thermoflex insulation.

Just as it was beginning to look as though the flag was finally ready, someone pointed out that the astronauts, owing to the pressurized suits they'd be wearing, would have limited grip strength and range of motion. Would they be able to extract the flag assembly from its insulated sheath? Or would they stand there in the gaze of millions, grasping futilely? Did they have the reach needed to extend the telescoping segments? Only one way to know: Prototypes were made and the crew convened for a series of flag assembly deployment simulations.

Finally came the day. The flag was packed (a four-step procedure supervised by the chief of quality assurance) and mounted on the Lunar Module (eleven steps), and off it went to the moon.

Where the telescoping crossbar wouldn't fully extend and the lunar soil was so hard that Neil Armstrong couldn't plant the staff more than about 6 or 8 inches down, creating conjecture that the flag was most likely blown over by the engine blast of the Ascent Module.

Welcome to space. Not the parts you see on TV, the triumphs and the tragedies, but the stuff in between -- the small comedies and everyday victories. What drew me to the topic of space exploration was not the heroics and adventure stories, but the very human and sometimes absurd struggles behind them. The Apollo astronaut who worried that he, personally, was about to lose the moon race for the United States by throwing up on the morning of his spacewalk, causing talk of tabling it. Or the first man in space, Yuri Gagarin, recalling that as he walked the red carpet before the Presidium of the Central Committee of the Communist Party of the Soviet Union and a cheering crowd of thousands, he noticed that his shoelace was undone and could think of nothing else.

At the end of the Apollo program, astronauts were interviewed to get their feedback on a range of topics. One of the questions: If an astronaut were to die outside the spacecraft during a spacewalk, what should you do? "Cut him loose," read one of the answers. All agreed: An attempt to recover the body could endanger other crew members' lives. Only a person who has experienced firsthand the not insignificant struggle of entering a space capsule in a pressurized suit could so unequivocally utter those words. Only someone who has drifted free in the unlimited stretch of the universe could understand that burial in space, like the sailor's burial at sea, holds not disrespect but honor. In orbit, everything gets turned on its head. Shooting stars streak past below you, and the sun rises in the middle of the night. Space exploration is in some ways an exploration of what it means to be human. How much normalcy can people forgo? For how long, and what does it do to them?

Early in my research, I came across a moment -- forty minutes into the eighty-eighth hour of Gemini VII -- which, for me, sums up the astronaut experience and why it fascinates me. Astronaut Jim Lovell is telling Mission Control about an image he has captured on film -- "a beautiful shot of a full Moon against the black sky and the strato formations of the clouds of the earth below," reads the mission transcript. After a momentary silence, Lovell's crewmate Frank Borman presses the talk button. "Borman's dumping urine. Urine [in] approximately one minute."

Two lines further along, we see Lovell saying, "What a sight to behold!" We don't know what he's referring to, but there's a good chance it's not the moon. According to more than one astronaut memoir, one of the most beautiful sights in space is that of a sun-illumined flurry of flash-frozen waste-water droplets. Space doesn't just encompass the sublime and the ridiculous. It erases the line between.

Excerpted from Packing For Mars: The Curious Science of Life in the Void by Mary Roach. Copyright 2010 by Mary Roach. Used with permission of the publisher, W.W. Norton & Company, Inc.