Accessibility links
Meet The 'Real Housewives' Of Washington, Not D.C. The newest addition to Bravo's Real Housewives franchise premiers Thursday, and while it may sound like it's about one place, the title actually names two very different places: Washington and D.C. 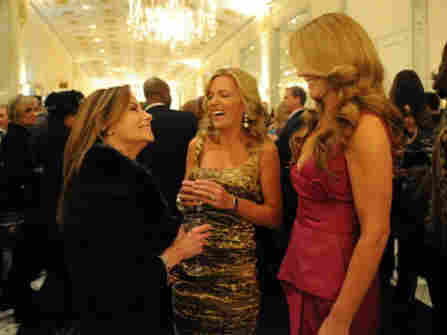 Lynda Erkiletian (from left), Catherine Ommanney and Mary Schmidt Amons are three of the five women featured in the new Real Housewives of Washington, D.C. Only one of the five actually lives in the District. Kevin Wolf/Bravo hide caption

TV viewers by the millions have followed The Real Housewives of Orange County, Atlanta, New Jersey and New York City. Now, one of cable's most successful reality franchises is moving to the nation's capital.

The Real Housewives of Washington, D.C. premieres Thursday on Bravo. And while it may seem like it's about one location, the title actually names two very different places: Washington and D.C.

Washington is the federal government, the monuments, the museums, and the powerful elite of the city and its Maryland and Virginia suburbs.

D.C., on the other hand, is the metropolis Parliament Funkadelic once celebrated as "Chocolate City" -- it's taxation without representation; it's so-called Mayor-for-Life Marion Barry; and, to its residents, it's the neighborhood.

Even The Washingtonian magazine draws a distinction between the two.

With its galas and high-society social climbers, there's no question about which of these places The Real Housewives of Washington, D.C. is really about. Just ask American University anthropology professor Sabiyha Prince, who studies the cultural history of Washington and D.C.

"These women are inhabiting ... the world of Washington more so than they are D.C.," Prince says.

The first season of any Real Housewives is about building relationships between women who are not necessarily friends in real life. Here, that means bringing together four white women who live in Washington's Maryland or Virginia suburbs, and one African-American woman -- the only cast member who currently lives in D.C. and apparent stand-in for the city's black majority.

The result is some very unfortunate "girlfriending" from housewife Mary Schmidt Amons, who gets tipsy at a party and corners two black guests to lecture them about what she sees as the pressing social problem of salon integration. ("We have different hair, different needs -- but why do we have to be in a different salon?" she asks.)

And while Real Housewives purports to give its viewers a look at a place through one of its largely closed-off groups, Prince says that the story of mostly white Washington suburbs vs. a black, urban D.C. is completely outdated.

"Washington is getting more diverse now," Prince says. "For so long, D.C. was about the dichotomy between black and white, and that's not even accurate anymore."

Prince describes Washington, D.C.'s culture as layered and complicated -- so much so, that it can even include party-crashing Virginians who enjoy playing polo by the Washington Monument. But, she says, there is one important thing to keep in mind.

"One group does not have monopoly over this place that we call Washington, D.C.," Prince says. "So I'm OK with highlight[ing] bits and pieces. It's part of the cultural dynamism of the place."

But with only nine episodes in the show's first season, it seems bits and pieces may not be enough.

We referred to the first season of "Real Housewives of Washington DC" as falling short, with nine episodes instead of the expected 13. That is an inaccurate characterization. While later seasons of the "Real Housewives" franchise do have 13 or more episodes, the first usually has no more than nine.