Accessibility links
What's So Worrisome About A BlackBerry? The United Arab Emirates and Saudi Arabia say they will pull the plug on some BlackBerry services -- because they can't monitor them closely enough. E-mails and instant messages the devices send are encrypted using a system controlled by the manufacturer, Research In Motion. 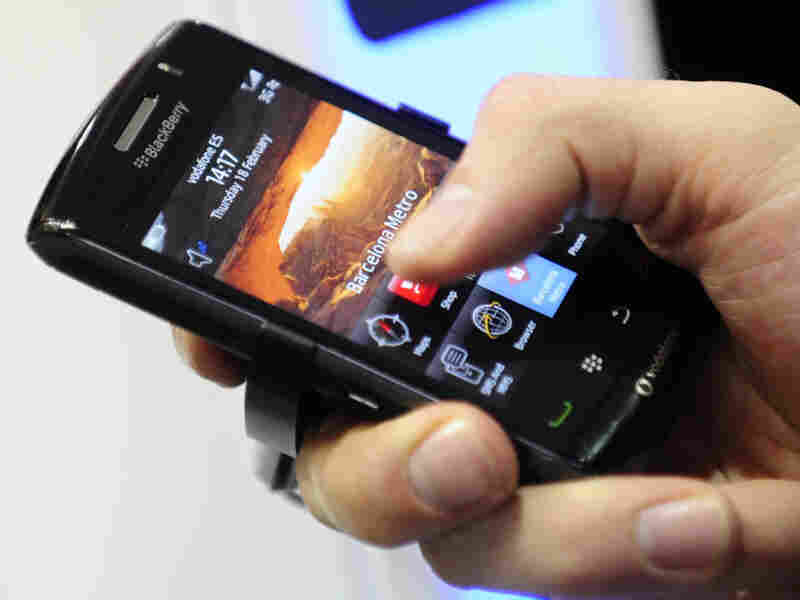 BlackBerry addicts may not be able to get their fix the next time they visit the United Arab Emirates. Telecom regulators in the emirates say they will shut down data service for the popular smart phone starting in October -- and that includes service for BlackBerrys brought in by foreigners. UAE officials don't like the fact that the smart phones are too hard to spy on.

BlackBerrys make governments nervous. That's because the e-mails and instant messages they send are encrypted -- using an encryption system controlled by Research in Motion, the Canadian company that makes BlackBerrys. That makes it next to impossible for security agencies to spy on those messages without RIM's cooperation.

And, apparently, officials in the UAE don't think they're getting that cooperation. Last year, the UAE tried to tap into BlackBerry data. It was a bust, according to Chris Soghoian, an expert in privacy and technology with Indiana University. "They were caught ham-fistedly trying to install spyware on the BlackBerry handsets of users in Dubai," he says.

RIM has apparently been in talks with UAE officials, and some believe the shutdown threat is just a negotiating tactic. The company declined to give an interview, but in a prepared statement, it hinted at a delicate balancing act between the demands of government security agencies and customer privacy.

"RIM respects both the regulatory requirements of government and the security and privacy needs of corporations and consumers," it said, in part.

UAE Not The First

Other countries have had similar spats with RIM. India has threatened a similar shutdown.

BlackBerry users in the U.S. may think they're safe from government spying, but Soghoian says Americans shouldn't be so sure their communications are always private.

"U.S. BlackBerry subscribers can be monitored fairly easily, too, it just requires a little bit more paperwork," he says. "The U.S. and Canadian governments have a very cozy relationships, and there's no reason to believe the Canadians would say 'no' to a request from a law enforcement or security agency in the United States."

That's not something RIM will confirm or deny. As to other kinds of smart phones -- iPhones and the rest, which usually use U.S.-based servers -- federal law requires those systems to be open to legally sanctioned surveillance by law enforcement agencies. And that's been true since the mid-1990s.