Accessibility links
Orangutans Aren't Lazy, Just Evolved To Hang Around Orangutans are nimble navigators of trees, but a new study shows they may also be among the most energy-efficient animals in the world. A lack of regularly available food in their forest homes may have led orangutans to need very little energy to survive. 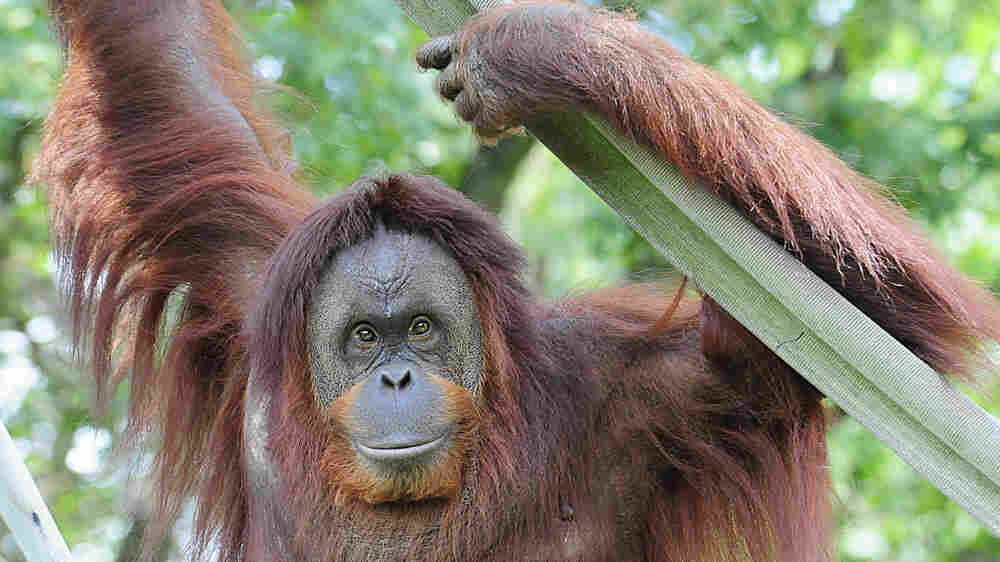 Second Place: Pound for pound, orangutans use less energy than any mammal ever measured, except for tree sloths. Scientists believe their energy needs may be dialed way down because a staple of their diet in the wild, fruit, can be hard to find for many months of the year. Karen Bleier/AFP/Getty Images hide caption

Orangutans are known as nimble navigators of the trees, but a new study shows the animals may also be among the most energy-efficient animals in the world.

Scientists have found that orangutans use less energy, pound-for-pound than any mammal ever studied, except for the tree sloth. The surprise finding shows how orangutans have evolved to survive in their native habitat, the forests of Sumatra and Borneo in Southeast Asia.

Orangutans are lanky apes, best known for their bright orange fur. They spend most of their lives living high up in the forest canopy and feed mainly off of fruit. They are also endangered as a result of deforestation by humans.

You and I sitting in front of our computers use more energy each day than these orangutans that are walking around, and climbing around and socializing around their big enclosures.

Field scientists have known for a long time that orangutans are languid creatures. "Orangutans are major slow-mos, any way you look at it," Anne Russon, a researcher at York University in Toronto, wrote in an e-mail from the forests of Borneo. The animals can spend 12 hours a day sleeping and nap for several hours more.

Herman Pontzer, an anthropologist at Washington University in St. Louis, wanted to know exactly how much energy the average orangutan uses. To find out, he traveled to the Great Ape Trust in Des Moines, Iowa, where several captive orangutans served as test subjects. Pontzer gave the orangutans water with a specific ratio of different oxygen and hydrogen isotopes. The body uses hydrogen and oxygen differently, and so measuring how the ratio changes over time gives a precise estimate of how much energy an animal uses.

To follow the change, Pontzer's team needed urine samples from the orangutans. "We walked around with some little paper Dixie cups and just held them under the ape and asked them if they would pee in the cup for us," says Rob Shumaker, vice president for life sciences at the Indianapolis Zoo and an author on the study. Shumaker had worked with the orangutans for years already and says that the animals were happy to provide the samples.

What the team found "was so surprising that we actually went back to make sure that we hadn't done something wrong," Pontzer says. The largest male orangutan weighed over 250 pounds but consumed just 2,000 calories a day -- that's 20 percent less than a typical human male.

"You and I sitting in front of our computers use more energy each day than these orangutans that are walking around, and climbing around and socializing around their big enclosures," Pontzer says.

"We think it's something deep in their physiology that the metabolic processes that are used to fuel their energy needs are just basically turned down," he says. In the wild, orangutans live mainly off fruit. But in the forests they call home, fruit can be hard to come by for several months of the year. Those who can survive on the least the longest stand a better chance of reproducing.

"Orangutans are an example of one evolutionary strategy for dealing with crappy habitat," says Russon, who was not involved with the work. She says the new study, which is published in this week's issue of the journal Proceedings of the National Academy of Sciences, can help us learn more about how humans and other apes, like chimpanzees, evolved. Pontzer agrees. He's now working with hunter-gatherer societies to gauge their caloric needs, in the hopes of comparing it to orangutans and other apes.