Accessibility links
BP Begins 'Static Kill' Procedure On Well Energy giant BP began pumping drilling mud Tuesday into the blown-out oil well in the Gulf of Mexico as part of efforts to seal it for good. The company went ahead with the step without waiting for a pair of costly relief wells to be finished. 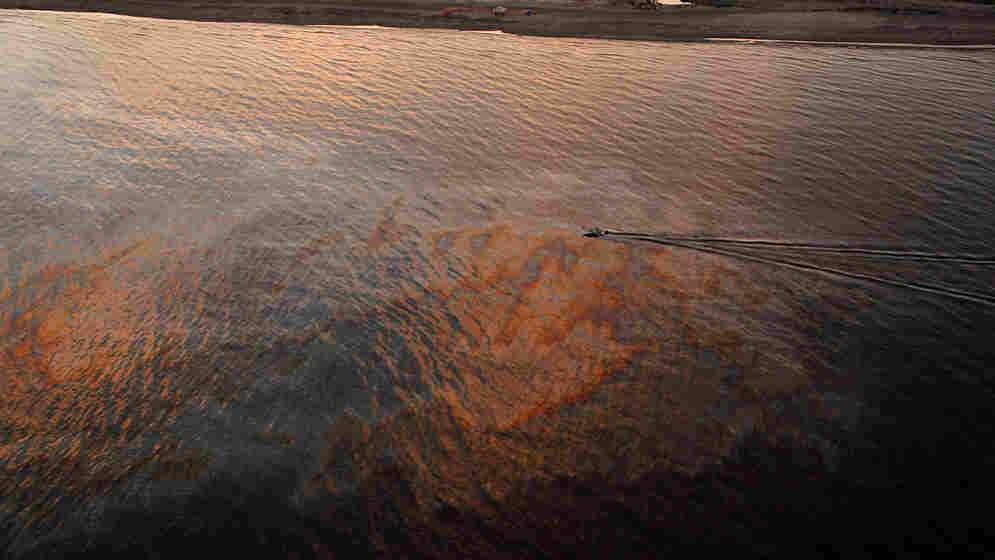 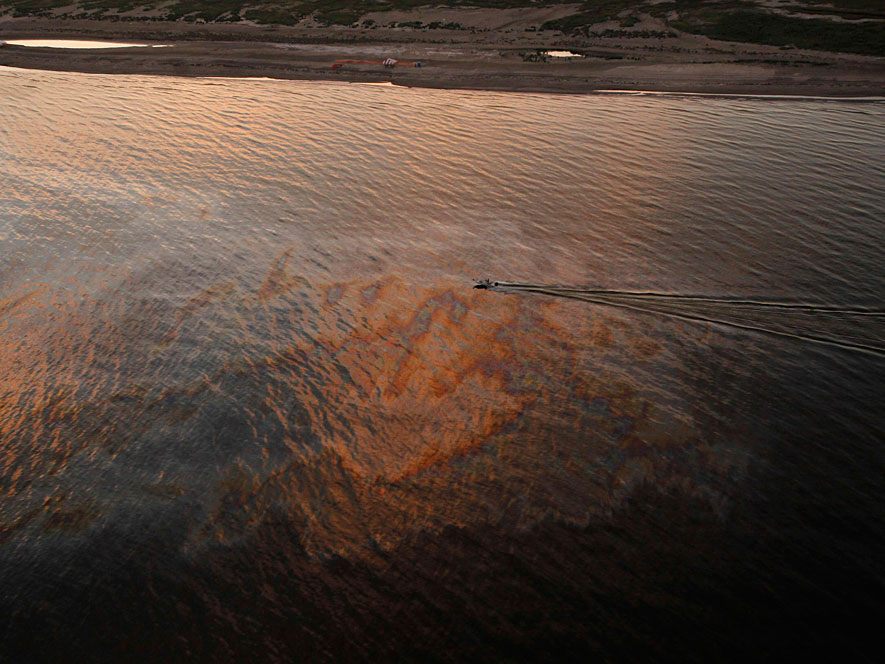 A boat motors through oil sheen from the Deepwater Horizon oil spill at sunset off East Grand Terre Island, where the Gulf of Mexico meets Barataria Bay, on the Louisiana coast, Saturday, July 31, 2010.

Energy giant BP began pumping mud Tuesday into the blown-out oil well in the Gulf of Mexico as part of efforts to seal it off for good.

In a statement, the company said the "static kill" procedure began at 3 p.m. (CDT). The company went ahead with the step without waiting for a pair of costly relief wells to be finished.

For months, BP maintained that the only sure and permanent fix was to drill a relief well to pump heavy mud and cement up into the ruptured well -- a procedure known as a "bottom kill."

But company engineers now say a top-down approach called a "static kill," in which mud and possibly cement is forced down the throat of the damaged well, could be enough.

BP Senior Vice President Kent Wells said Monday that even if the bottom kill proves unnecessary, drilling on the primary relief well would go ahead anyway.

This thing won't be truly sealed until those relief wells are done.

"Even if we were to pump the cement from the top, we will still continue on with the relief well and confirm that the well is dead," he said. Either way, "we want to end up with cement in the bottom of the hole."

Retired Coast Guard Adm. Thad Allen, the government's point man on the spill response, said earlier Tuesday that the bottom kill will be done regardless of whether the static kill works.

"This thing won't be truly sealed until those relief wells are done," he said at a news conference in Houston.

Wells said it likely would take up to two weeks to finish drilling the first of two relief wells, which can cost about $100 million each.

The company began drilling the primary, 18,000-foot relief well May 2, 12 days after the Deepwater Horizon rig exploded and killed 11 workers, and a second backup well May 16. The first well is now only about 100 feet from the target.

Graphic: How The 'Kill' Works
AP

BP had hoped to conduct preparatory tests for the static kill on Monday using an oil-like liquid to test the flow, but a mechanical problem aboard the Q4000 drilling vessel caused a delay.

Instead, the tests began Tuesday afternoon and engineers planned to work through Thursday pumping the heavy mud down the well.

If they can fill the entire column with the mud, cement could then be used to form a solid stopper.

By the government's latest estimates, 206 million gallons -- or nearly 5 million barrels -- of oil spewed into the Gulf of Mexico until a temporary cap was placed over the well last month. That would make the disaster the largest-ever offshore spill.

The numbers run close to the results of an analysis conducted for NPR by independent scientists this spring. Analyzing video from the undersea cameras trained on the wellhead, the scientists estimated that about 70,000 barrels a day were spewing into the water; BP put the figure at about 5,000 barrels.

"The new federal estimate is that something like 62,000 barrels of oil was coming out of the well at that time," NPR's Richard Harris said Tuesday. The independent analysis was "really right on the money," Harris said.

BP and federal officials have managed to contain large parts of the spill through skimmers, oil-absorbent boom and chemical dispersants meant to break up the oil.

Federal regulators have come under fire from critics who say BP was allowed to use excessive amounts of the dispersants, but government officials counter that they have dramatically limited the use of the chemicals since late May.

The Environmental Protection Agency released a study Monday concluding that when mixed with oil, chemical dispersants used to break up the crude in the Gulf are no more toxic to aquatic life than oil alone.

BP on Tuesday said it had created a special team to speed up the processing of claims from businesses harmed by the spill.