Accessibility links
In Japan, Living Large In Really Tiny Houses Building a house on a lot the size of a parking space? In Japan's crowded cities, where land is scarce, architects are turning necessity into virtue by building stunning and stylized homes on remarkably narrow parcels of land.

The Japanese have long endured crowded cities and scarce living space, with homes so humble a scornful European official once branded them rabbit hutches.

But in recent years, Japanese architects have turned necessity into virtue, vying to design unorthodox and visually stunning houses on remarkably narrow pieces of land. In the process, they are also redefining the rules of home design.

Few Americans would consider a parking-space-sized lot as an adequate site to build a house. But in Japan, homes are rising on odd parcels of land, some as tiny as 300 square feet.

Yet the term "house" doesn't really do justice to these eye-catching architectural gems, fashioned from a high-tech palette of materials like glittering glass cubes, fiber reinforced plastic and super-thin membranes of steel.

The need to do more with less space has sparked a boom in house designs that are as playful and witty as they are livable. One of Japan's leading designers of kyosho jutaku, or ultra-small homes, is Tokyo architect Yasuhiro Yamashita.

People tend to think of homes simply in terms of floor space. We architects think in 3-D.

"If you tried to build a normal house on a super-small plot of land, it would end up being really cramped. So in order to make the house as roomy as possible, we have to think up new structures and assembly," Yamashita says.

Windows, in a variety of shapes and sizes, are scattered across a wall, or concealed near the base. A bathroom is separated by just a curtain. Furniture can be folded into the wall, allowing a single room to serve multiple purposes.

Designers indulge in fantasy, like asymmetrical walls, cantilevered floors, or cover their houses in a translucent skin, in order to exploit all available natural light. 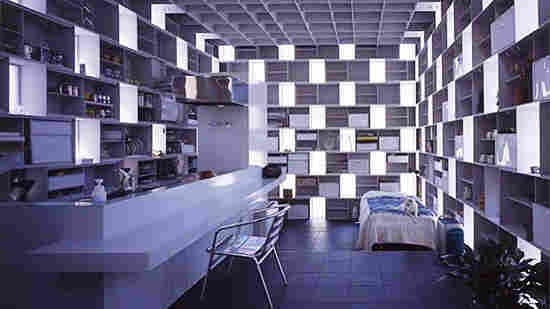 Interior of "Cell Brick" micro-home. Built-in steel boxes are a whimsical yet practical answer to limited space, providing storage and, in the architect's words, "eliminating monotony" on the inside. Courtesy of Makoto Yoshida hide caption

"'Lucky Drops' was built on an extremely long and narrow space. So light could enter only from the ceiling," Yamashita says, speaking in Japanese. "All the light comes in from the top. So the whole house becomes like a Japanese paper lantern."

The boom in quirky small homes was fueled by new design and materials technology, which have slashed the price of a custom-built home by as much as two-thirds, making these homes affordable for singles and middle-class couples.

Minoru and Aki Ota, a couple in their 30s, reside in a home that sits on fewer than 500 square feet. The walls, floors and even the kitchen table are made entirely of precast concrete.

"We weren't interested in a big house in the suburbs. We were happy to have a comfy place downtown. It's not that we wanted to live in a micro-house, but it's turned out to be plenty of room for two and convenient," Minoru Ota says.

The home features narrow windows at ground level, strategically placed to reveal bits of scenery, and flood the house with light.

Washing dishes at the counter -- it's also made of concrete -- Aki Ota says the house has proved warmer than they expected, but the novelty hasn't worn off four years into their residence. She says it's like living in an art museum. 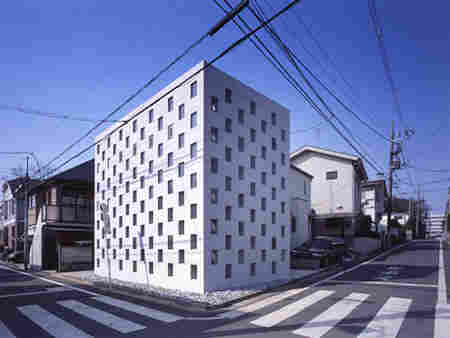 "Cell Brick" (exterior) is a three-story micro-house in Tokyo, circa 2004. Architect Yasuhiro Yamashita says he "cross-stitched" steel and glass to create the eye-catching facade. Courtesey of Makoto Yoshida hide caption

"Where the forms of these houses is very unusual, asymmetric, seemingly unbalanced or lopsided, it's because there's a room or certain functions that need to be accommodated," Brown says. "And rather than make everything be symmetrical and line up, they just said, 'Well, if this living room is just going to have to stick out, over the parking space, so be it.'"

The real genius of ultra-compact homes is the use of visual tricks that make tiny spaces appear roomier.

"People tend to think of homes simply in terms of floor space. We architects think in 3-D," Yamashita says. "Using all three dimensions, we can make a space look larger, and more functional. It becomes easier to devise ways of bringing in more light and air."

"It's kind of a psychological jujitsu," Brown says. "That changes your sense of perception from the things that would make you feel claustrophobic perhaps, and rather focusing on the life and the people that you're with."

Do-It-Yourself Downsize: How To Build A Tiny House

Super-small luxury houses might seem counter-intuitive to most Americans, who measure their floor space in the thousands of feet, not hundreds.

But Brown, who has lectured on the subject for New York City planners, says the techniques in Japan could offer lessons on how to comfortably house residents in other teeming cities.

"We are larger people physically than the Japanese, we do tend to need more space, we're less comfortable in some sitting positions, like sitting on the floor, than most Japanese are. But I think we could also accommodate ourselves to it," Brown says.

As for the Japanese, who have updated their small-house design based on traditions such as the teahouse, they haven't just accommodated to ultra-tiny homes -- they now revel in them.