Accessibility links
Now We Are Alone: Living On Without Our Sons A year ago, the author and his wife were part of a happy family with a bright future. Then their two sons were killed in a car crash. Now they feel a certain bond with other parents who understand that children die a second time "when no one speaks their name." 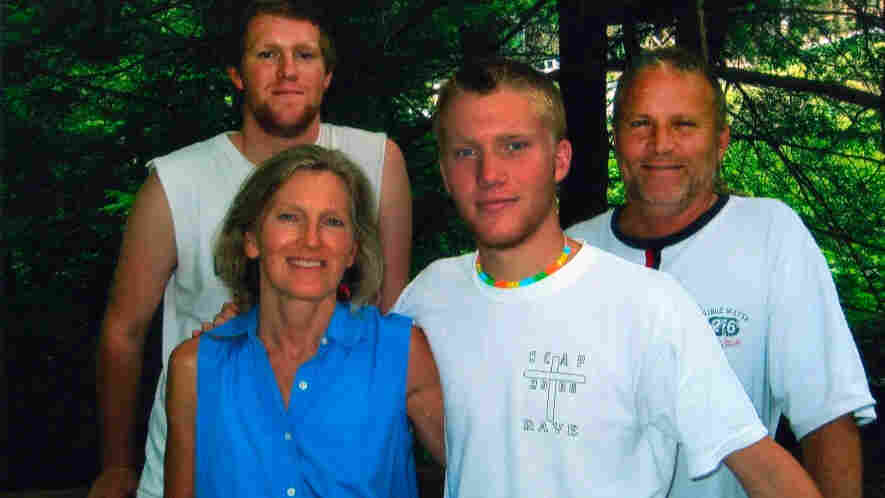 Jan and Linton Weeks with their sons Holt (second from right) and Stone (left) who both were killed in a car crash a year ago. Courtesy of Linton Weeks hide caption 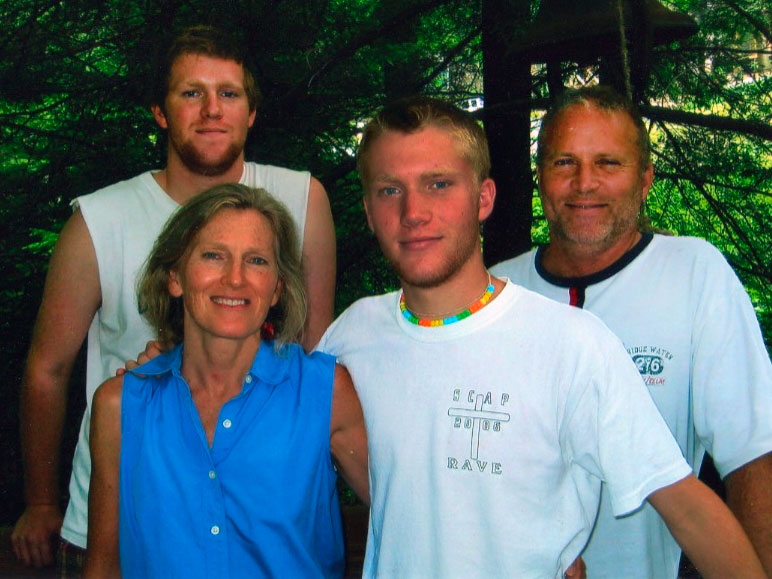 Jan and Linton Weeks with their sons Holt (second from right) and Stone (left) who both were killed in a car crash a year ago.

My wife, Jan, and I did not celebrate a damn thing this summer. We didn't take a family vacation or meet up with old friends or invite neighbors to our backyard for a picnic. Instead, we got in the car one morning and drove to the annual national conference of The Compassionate Friends, a support organization for parents who have lost a child.

Or, in our case, children. All of our children.

Just a year earlier, we were very happy and lighthearted. We were content in our work and our marriage, and we had two beautiful, amazing sons -- Stone, 24, and Holt, 20.

We spent several wonderful days with them at a family reunion in Nashville on that July weekend in 2009. Stone and Holt had each worked so hard to be at a glorious point in their two lives. And they were finally together, delighted to be living in the same city after spending several years apart.

No matter how your child dies, there is an undeniable sense of failure among bereaved parents. Jan and I are haunted by Stone's and Holt's violent, senseless deaths, and all the wrongs that can never be righted.

The four of us laughed so much. And we had serious discussions, talking history and politics. We listened to music and danced and told stories. As Jan and I said goodbye to them, we gave them hugs.

It was the last time we ever saw them.

Less than two weeks later, on July 23, 2009, as they were driving home to be with us again, they were killed by a massive tractor-trailer truck. It plowed into their car while they were stopped in traffic on a Virginia highway. We received the heart-smashing news on an early Friday morning. Ever since that instant, we have been living in -- no, wandering through -- a meaningless, joyless, surreal world. And feeling very alone.

Now, a year later, Jan and I were at a hotel in Arlington, Va., with more than 1,400 other people who also have lost a child. We were at the 33rd annual gathering of The Compassionate Friends. It's an organization to which none of its members want to belong. And yet, for scores of people we run into at the conference, The Compassionate Friends is a lifesaver.

'You Are Not Alone'

The three-day event was packed with lectures, sharing sessions and more than 100 workshops that had titles like "Witnessing the Death" and "A Deafening Silence: Communication Issues for Bereaved Families."

The overarching message of the organization: Losing a child is an alienating experience. You are alienated from everything you knew before the event -- your friends, your family, your self. Nothing is the same. By gathering together and sharing experiences with others who are alienated in the same way, you may be able to go on living. 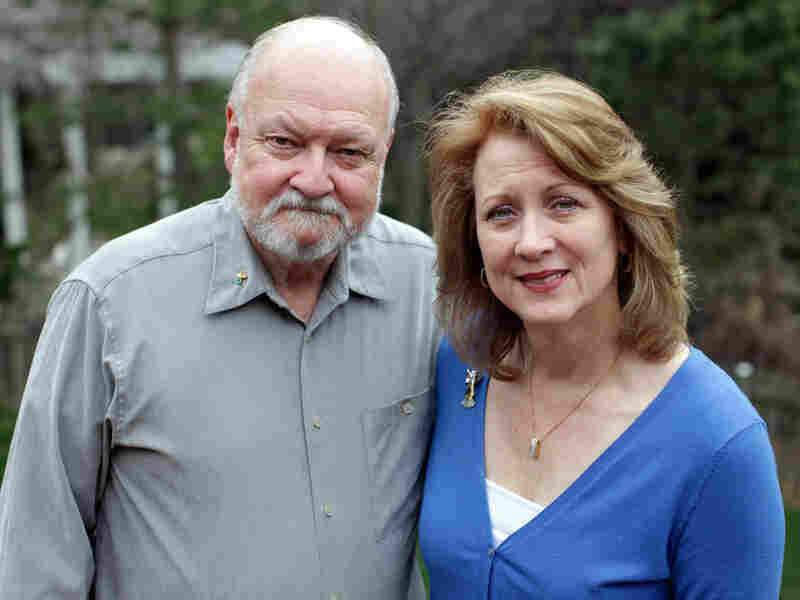 Chuck and Kathy Collins lost their daughter Tiffanie to bacterial meningitis in 1996. This summer, they chaired the national conference of The Compassionate Friends. You can read more about the organization here. Coburn Dukehart/NPR hide caption

Our first stop was the orientation for first-time attendees. There were hundreds of people in the room. David and Peggy Gibson of Nashville -- whose 23-year-old daughter, Paige, died of a malignant brain tumor in 1985 -- handed out gentle advice. "This is your grief journey -- you are not alone," Peggy Gibson said to everyone. "You are a member of this family."

David told about meeting a woman at a previous conference. She had tears in her eyes and she said three things to him: "This has been wonderful. This has saved my life. I do not want to go home."

The keynote speaker was former Sen. Gordon Smith of Oregon, whose son, Garrett, committed suicide in 2003 at age 22 after battling bipolar disorder and depression. Gordon Smith told the audience that he learned the news from police officers. "As the door closed, shock and numbness held me for a moment above what looked like the blackest depths of sorrow and failure. Joy vanished," he said.

Stone and Holt Weeks were both working as researchers at Rice University in Houston at the time of their deaths.

Stone, 24, was the research assistant for historian Douglas Brinkley, having worked most recently on a book about Theodore Roosevelt and the environmental movement. Holt, 20, was in his second summer as an intern at the James A. Baker III Institute for Public Policy. He was to start his junior year of college at Rice in the fall.

The brothers were killed on July 23, 2009, while stopped in highway traffic, heading home to Washington, D.C., to visit their parents and attend a publication event for the Roosevelt book.

You can read more about the Weeks brothers at stoneandholtweeksfoundation.org.

"Years of striving and achieving now appeared as ashes to me," he continued. "Success in business, service in church, even election to the United States Senate -- in an instant, it all seemed meaningless, even vain. I had failed to save my own son and I felt I had failed at my most important and lasting responsibility: that of family, that of fatherhood."

No matter how your child dies, there is an undeniable sense of failure among bereaved parents. Jan and I are haunted by Stone's and Holt's violent, senseless deaths, and all of the wrongs that can never be righted. Including the biggest of them all -- we could not save our sons from death. We should have been the ones who died first, not our precious boys.

We carry that guilt in our already shattered hearts, and we relearn every morning when we wake up that the loss of our children is something we will never get over. Or past. Or through.

At the conference luncheon, Maria Housden, whose daughter Hannah died of cancer at age 3 -- nearly 16 years ago -- spoke of the challenges: "I am profoundly grateful for gatherings like this one where we can be together, share our stories, our loved ones' names, our memories, our grief. We need to come together to support one another because our culture does so little to prepare us for death, especially the death of a child."

The pain we feel following the death of a child, Maria said, is compounded by our inexperience and the inexperience of those around us. We feel isolated from our culture. From our friends, our families, our work.

And so The Compassionate Friends conference brought together all of us isolates.

To Bond And To Cry

Here was a vast collection of painful, tragic stories. Every person was there because of unspeakable sorrow. Yet the protocol of the gathering is to speak of that sorrow when you meet someone. 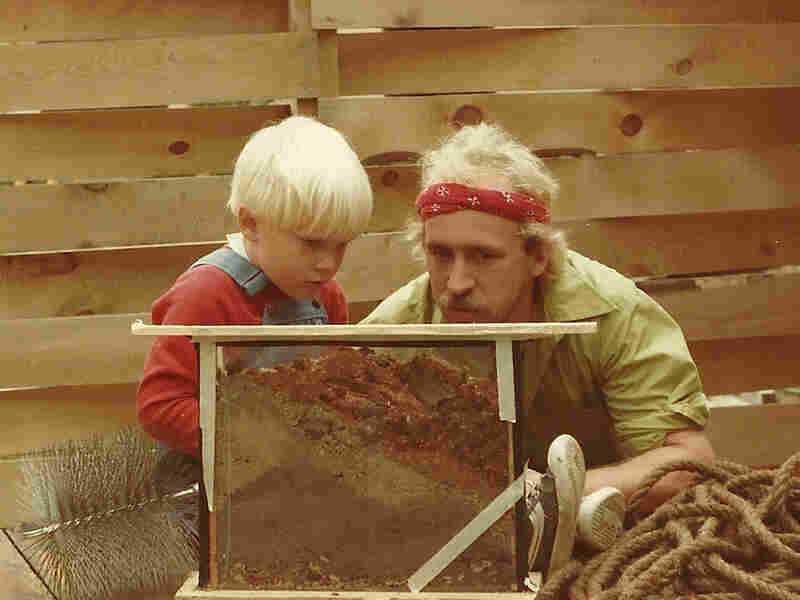 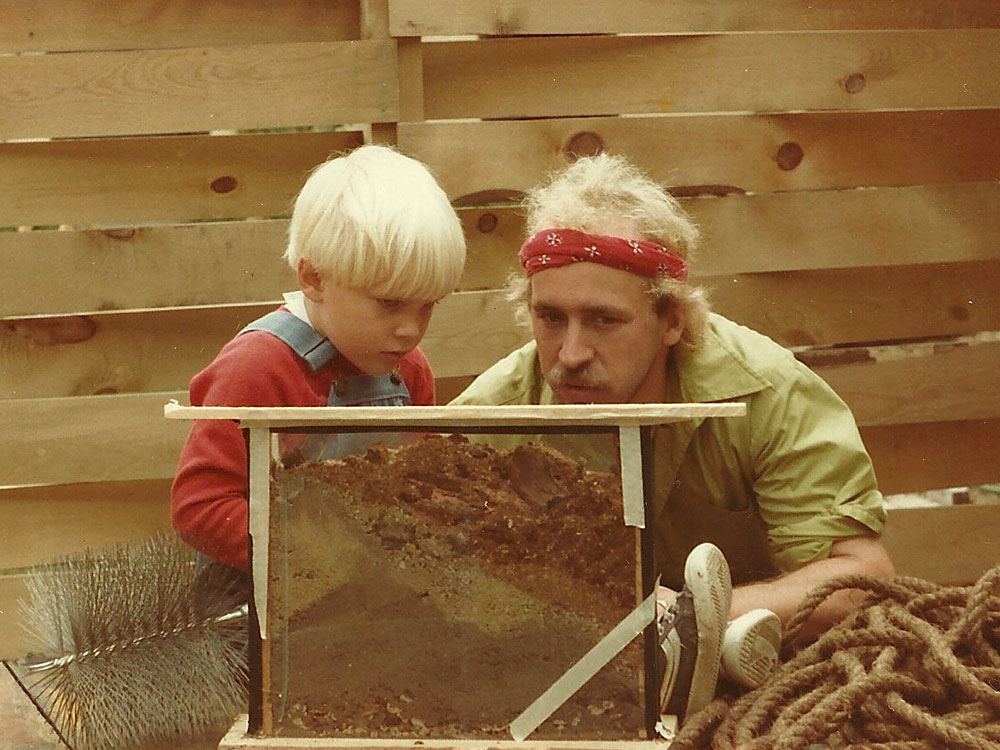 Mitch Carmody with his son Kelly, who died of cancer at the age of 9.

His daughter was killed in a motorcycle crash; her son was murdered; their baby died just after being born.

The Compassionate Friends embraces us all. With more than 600 local chapters and regular chapter meetings, it is several support groups rolled into one -- a suicide prevention hot line, a forum for patients with incurable heart disease, and a rehab clinic for people who are likely to abuse drugs and alcohol.

We had been in deep grief for slightly less than a year, but we were struck that many conference-goers had been coming back year after year. For years -- to bond, and to cry with old friends and new friends over children lost long ago or more recently.

Because of our extreme circumstances, Jan and I were especially interested in about a half-dozen panel discussions, including "Sudden Death -- Vehicular" and "Hope for Bereaved Parents with No Surviving Children." We attended a "Multiple Loss" workshop for parents who have lost more than one child.

Our child dies a second time when no one speaks their name.

Mitch Carmody of Minnesota, whose 9-year-old son, Kelly, died of cancer in 1987

During one break, we browsed in the gift shop. People were buying ornaments, jewelry, knitted things, teddy bears and memory bracelets. Many sported those secret symbols of eternal love: butterflies, dragonflies, sunflowers. Jan, who has read many books about grief already, bought more books.

In the afternoon, she sat in on a session called "Whispers of Love: Signs from Our Children" led by Mitch Carmody of Minnesota, whose 9-year-old son, Kelly, died of cancer in 1987. Mitch said he felt burdened by the pressure to get over the death of his son for 10 years, until one day he looked at a photo of Kelly and fell to his knees and wept. "Our child dies a second time," Mitch said, "when no one speaks their name."

At the end of the first day, Jan and I were exhausted. We didn't have the stamina to stay for the evening sharing sessions. We heard that they often go on for hours.

Instead, we drove home. And went to bed, not really sure if we had the energy to go through another day of workshops and panel discussions.

But the next morning, for more than one reason, we were in the car again, two sorrow-filled parents driving through Washington to go back to the conference. For another day, in a place where we did not feel quite so all alone.