Accessibility links
Tensions Rise As China Launches Show Of Force China is holding a series of high-profile military maneuvers, reflecting a new era of tension with the U.S. over operations in the South China Sea. China's military assertiveness is worrying some Southeast Asian neighbors and raising concerns over how far Beijing will go to assert its claims. 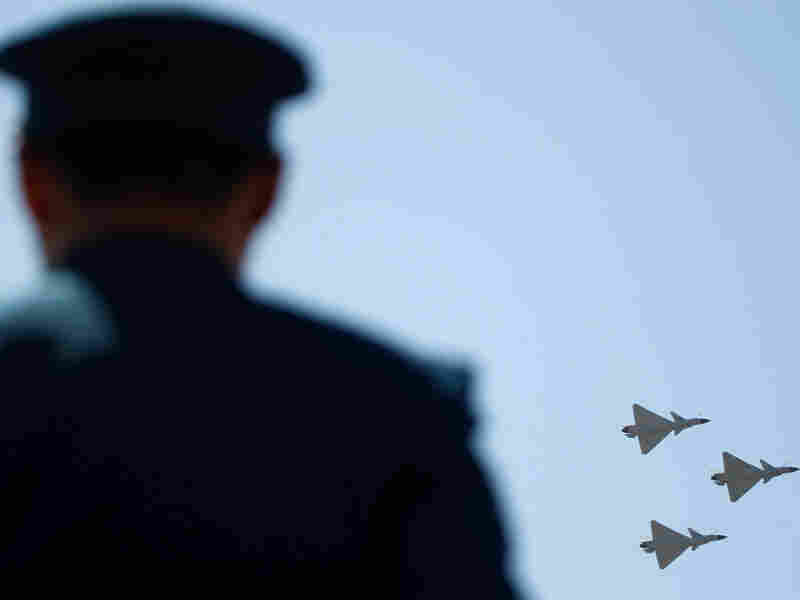 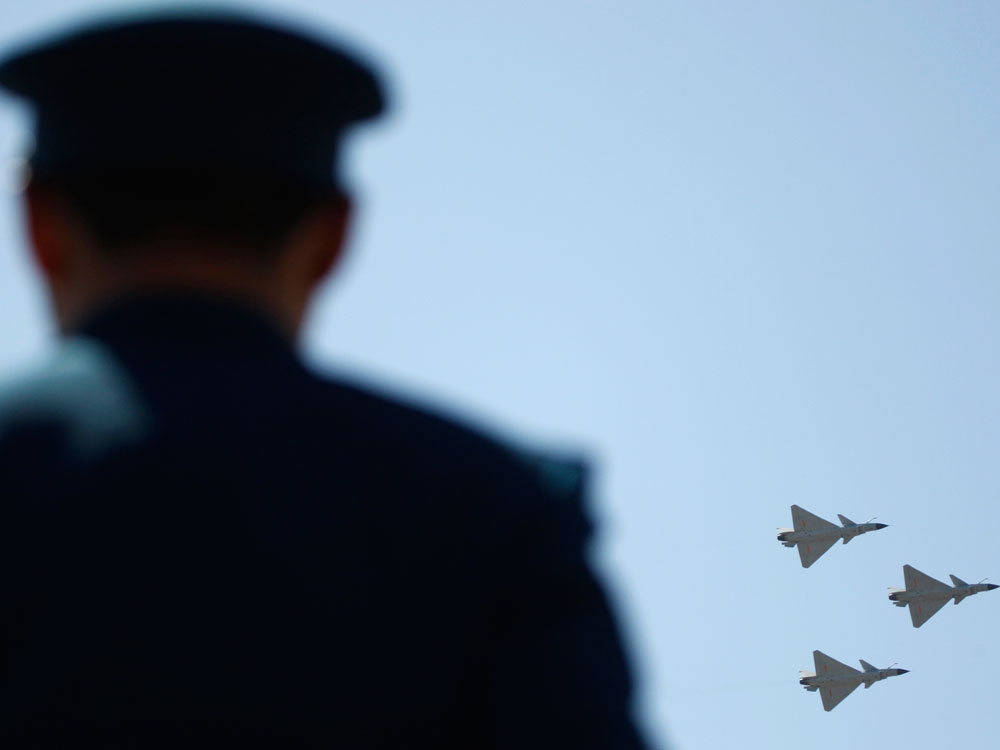 Chinese J-10 fighter jets fly in formation during an aerial demonstration in Tianjin province in April.

China's air force this week is conducting a five-day exercise involving scores of aircraft and 12,000 soldiers. Dubbed "Vanguard 2010," it is the latest sign of China flexing its muscles amid rising military tensions with the United States.

The strains -- especially over operations in the South China Sea -- represent a new area of dispute between China and the U.S.

China's military drills were once top secret, announced only after they were completed. But these days China's armed forces seem to want to broadcast its movements to the world.

This latest exercise is taking place in the central province of Henan and eastern province of Shandong, which abuts the Yellow Sea, and includes 100 military aircraft. It is the latest in a series of high-profile maneuvers, including naval exercises last week in the South China Sea, which were the largest of their kind.

It is the first time the United States has become involved in regional territorial tensions, and China's Foreign Minister Yang Jiechi reacted with fury.

Shi Yinhong, director of the Center for American Studies at People's University in Beijing, called Clinton's comments an "ambush."

"I don't think Washington made any serious pre-consultation or even [gave any] information to China, then suddenly launched this in Hanoi," Shi says. "I think that this strategic dispute is very unique and quite bad."

China had already been angered by joint war games between South Korea and the U.S. in the Sea of Japan, off the east coast of South Korea.

Those drills were aimed at North Korea following the sinking in March of the Cheonan, a South Korean warship. But China also felt threatened by the proximity of the exercises.

"What will Americans feel if the Chinese or Russian military travel across the ocean to hold exercises in the high seas not far from the coast of Florida, California or New York?" the China Daily asked in an editorial.

Now Beijing is issuing its own response with its recent military drills.

"What you see with the very rapid rise of China as a great naval power is the fact that China can flex its muscles a little bit more," says Ralf Emmers of Singapore's Nanyang Technological University and the author of a book about geopolitics and maritime territorial disputes in East Asia.

"We don't know to what extent China would use military force to impose its claims on the South China Sea. In fact, what we have seen since 1995 [is] a lot of restraint, a willingness to negotiate with various Southeast Asian countries and try come up with a code of conduct," Emmers says.

No one knows how far China would go. In March, a senior Chinese official spoke for the first time of the South China Sea as a "core national interest," a category which formerly only encompassed Taiwan and Tibet.

Beijing's sovereignty claims over the South China Sea are not new, but it is clearly becoming more assertive. It has been exercising these claims by seizing Vietnamese fishing boats, detaining Vietnamese fishermen and pressuring western oil companies not to do business with Vietnam.

Now China's increased assertiveness is scaring the same Southeast Asian neighbors that Beijing has been wooing assiduously with loans and investment.

"A lot of Asian countries seem to be willing to join the hedging game against China, like Vietnam and Indonesia -- both want to have some military cooperation with the U.S.," says Huang Jing, an expert in China and security issues of the National University of Singapore.

He says the latest developments could reflect a worrying trend.

"It seems to me that Chinese navy has outgrown China's strategic thinking. The strategic thinkers are lagging behind the naval expansion, which could be very, very dangerous," he says.

China's navy and top generals don't "really have a thought-through strategy. They just behave according to capacity. There are very bad historical lessons -- number one is Japan in the 1930s -- but I think Chinese leaders should be more sophisticated than that," he says.

The escalation of tension is taking place at a time when military ties between the U.S. and China have been suspended. China cut military contacts in January in protest at arms sales to Taiwan.

"I don't think there's a real risk of open conflict in the South China Sea," Emmers says. "But misunderstandings and the risk of accidents should not be counted out. The Pentagon and the [Chinese military] will have to find channels of communication to prevent such misunderstandings from potentially escalating into diplomatic rows and then crises."

With this proliferation of war games, the heat is rising. And it could rise further. The South Korean navy is reportedly planning more war games in the Yellow Sea and monthly drills with the United States.

China's army-run daily newspaper is in a bellicose mood, warning that the army should "strengthen preparation for warfare."