Accessibility links
Calif. Gay Marriage Ruling Could Have Raft Of Legal, Political Ramifications California's same-sex marriage ban was overturned Wednesday, sparking rallies across the U.S. and reigniting debate about a raft of legal and political ramifications. While some say the ruling helps legitimize the issue, others are skeptical it will survive an appeal. 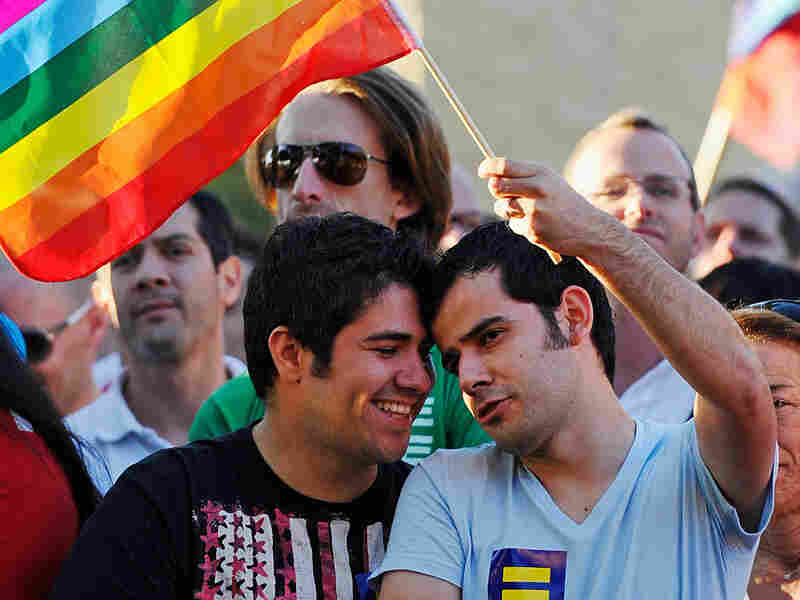 Prop 8 opponents listen to speakers during a rally to celebrate the ruling to overturn Proposition 8 on August 4, 2010 in West Hollywood, California. Kevork Djansezian/Getty Images hide caption 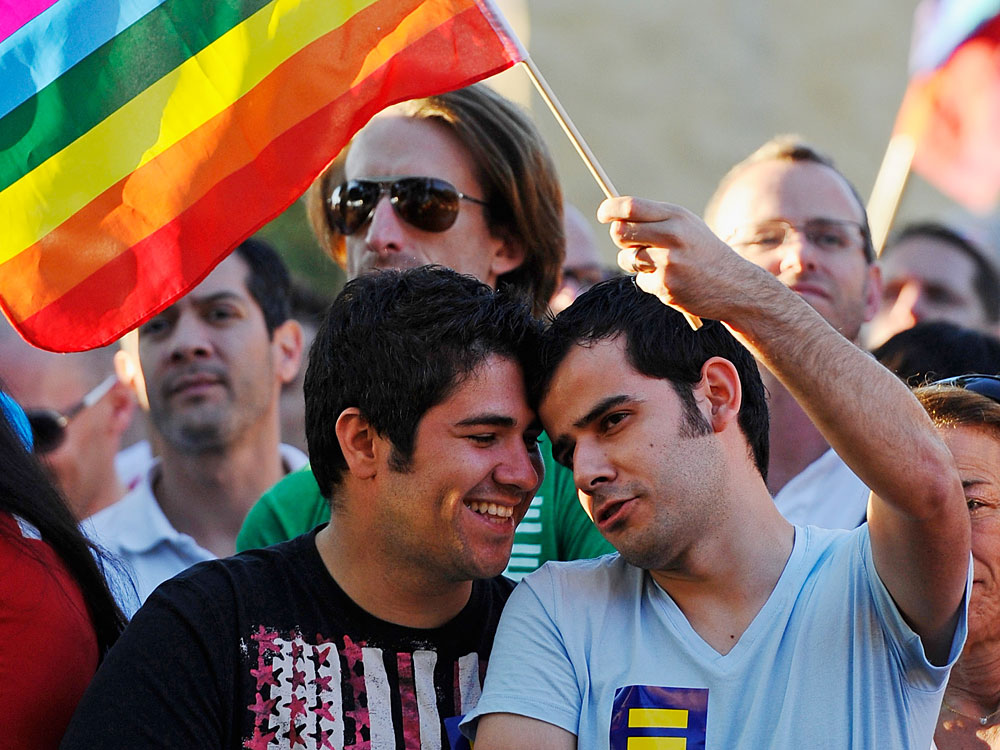 Prop 8 opponents listen to speakers during a rally to celebrate the ruling to overturn Proposition 8 on August 4, 2010 in West Hollywood, California.

The federal court ruling upholding same-sex marriage in California made waves across the nation Wednesday, sparking rallies in dozens of cities all the way to the East Coast. But whether it causes just a ripple or a political and legal tsunami depends on whether it survives the appeals process -- and makes it to the Supreme Court.

For now, same-sex couples in California who want to marry are still waiting. Attorneys on both sides have until Friday to file arguments on whether the ruling should be stayed pending the appeal.

Northwestern University law professor Andrew Koppelman says U.S. District Judge Vaughn Walker increased the odds of surviving appeal by basing his decision on his finding of fact -- something appeals courts usually defer to -- rather than his interpretation of the law.

In his lengthy ruling, Walker said the voter-approved ban on same-sex marriage violated the constitutional rights of due process and equal protection and prevented California from fulfilling its constitutional obligation to provide marriages on an equal basis.

"He did not say that as a matter of law, gay people are a protected class under the 14th Amendment," Koppelman said. "He said that as a matter of fact, the justifications for this law that were offered by its defenders rested on factually false premises. And it's very hard for a court on appeal to say he was wrong about that."

Still, the U.S. Supreme Court is anything but a sure bet.

With gay marriage banned in most states, Stanford University law professor Rick Banks said, justices will be loath to swing so far ahead of public opinion.

If the court does opt to uphold a constitutional right to gay marriage in the next couple of years, Peter Sprigg of the conservative Family Research Council agreed it would be explosive.

"This would be the Roe v. Wade of same-sex marriage -- that in fact Roe v. Wade served only to polarize the issue of abortion rather than to settle it," Sprigg said.

"Every time a court does this, we grow exponentially. People are fed up, and that's what's happening right now," said Brown, who has been leading rallies against gay marriage around the nation. "It's going to make clear what the ultimate solution is. You know, this issue was working it out on the state level before Walker made this decision. Now he’s made it a national issue. It's going to be an issue in the elections."

"This is the Democrats' worst nightmare, basically," he said.

With midterm elections fast approaching, many Democrats agree that there is little upside for them on this issue right now. And it may be President Obama who feels it most of all.

Richard Socarides, a former Clinton administration adviser on gay issues, said Obama has frustrated a wide swath of his liberal base with the fine line he’s been trying to walk -- opposing the Defense of Marriage Act but also continuing to oppose gay marriage.

"That's his problem -- that he shows no signs of moving on this issue, and it's coming at him now like a Mack truck," Socarides said.

In some ways, this court decision may offer a little political cover to those supporting gay marriage.

Democratic Rep. Barney Frank of Massachusetts agreed that it helps legitimize the issue. He is somewhat skeptical that Walker's decision will survive an appeal, but, he said, time is on the side of gay marriage.

"Younger people simply are not nearly as concerned, as unhappy; they are more supportive, so I do think that we are very likely to see same-sex marriage in coming years from a variety of legislative and judicial decisions, because the attitude is moving in that direction," Frank said.

As one advocate put it, gay marriage will be secure only when it stems from the court of public opinion rather than a court of law.