Accessibility links
Quirk of Nature: Janacek's 'Cunning Little Vixen' Although populated with barnyard animals, the opera speaks volumes about human nature, though some of Janacek's most touching music. 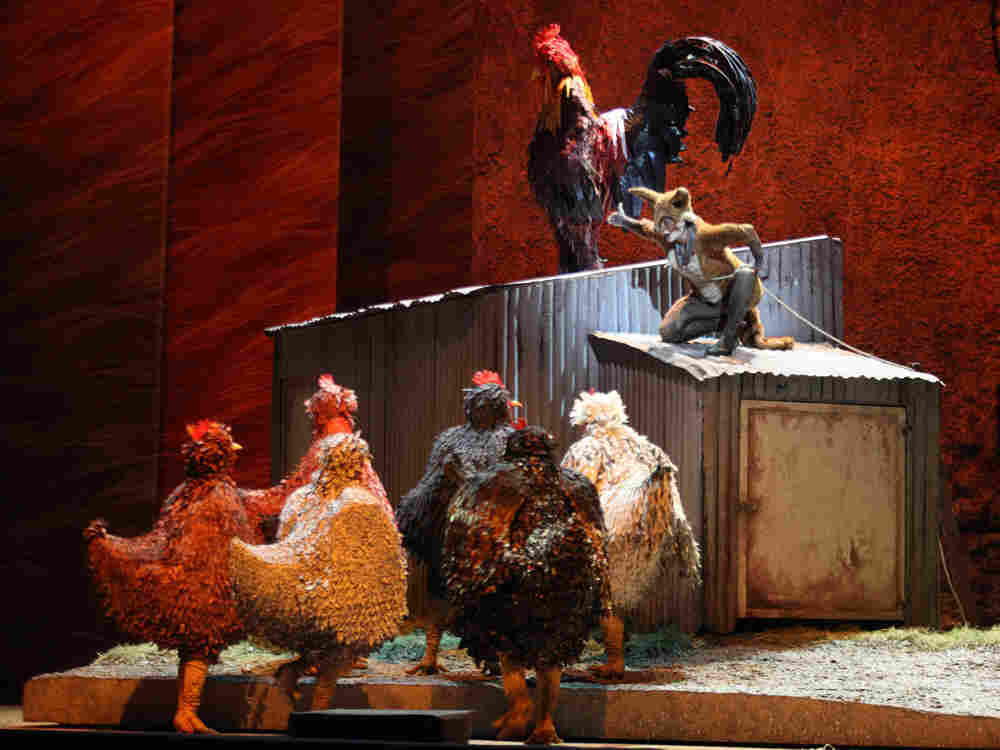 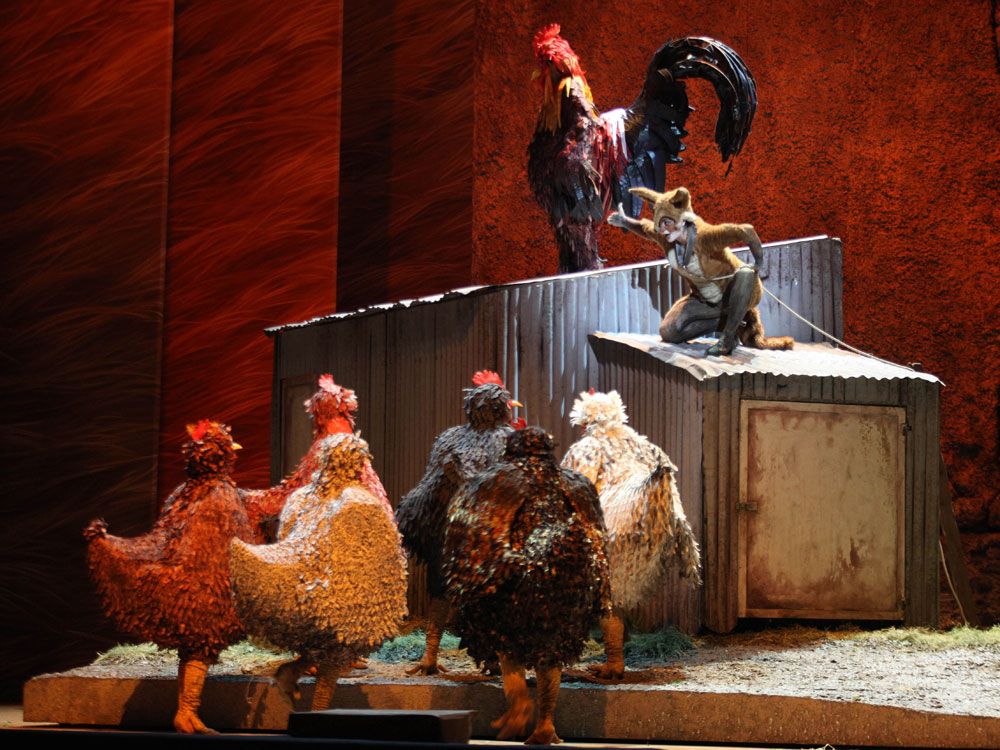 The Vixen (Isabel Bayrakdarian) sows seeds of discontent among the barnyard animals.

In Act Two, the Vixen (soprano Isabel Bayrakdarian) encounters a handsome, male Fox (soprano Lauren Curnow) who clearly finds her striking. At first she's cautious, but as their duet ends the two make an intimate retreat into the privacy of her burrow.

The Vixen Falls in Love

Janacek filled his opera with short but evocative orchestral interludes. One of the best takes place in the last act. As the Vixen lies dying, the scene changes back to the human world, which seems to have changed forever with the Vixen gone.

In the four centuries or so since the first operas were written, operatic stories have been inspired by an astonishing array of literary sources -- from Nordic legends and Greek classics, to romance novels and historical fiction.

Still, there's one composer who may win the prize for operas based on wide-ranging sources. In 1920, Leos Janacek turned to science fiction for his opera The Excursions of Mr. Broucek, setting one of its scenes on the moon, where the local residents turn out to be fussy, art aficionados. Another of his operas, The Makropulos Case, is a sort time travel story, in which a magic formula lets the main character live for hundreds of years. But when it comes to unorthodox subject matter, Janacek may have outdone even himself with The Cunning Little Vixen, basing it on what was essentially a comic strip.

These days, with Hollywood churning out big budget movies based on comic book characters such as Iron Man, the Silver Surfer and the Incredible Hulk, a comics-based opera about a cute little fox may sound a bit tame. But in its day, Janacek's opera did stick out as something different -- and actually, it still is.

The composer got the idea for his Vixen from a serialized newspaper story, with drawings, detailing the adventures of a clever fox cub. She's captured by the local Forester, grows up on his farm, and then escapes back to the woods to raise a family. It sounds simple but Janáček, who wrote his own text, has much to say about the connections between people and animals, and the cyclical nature of life and death.

So, instead of regal kings and consumptive heroines, this opera stars badgers, dogs, chickens and frogs, with bit parts for a flurry of other curious critters -- and even a handful of humans. Along the way they tell a gently cautionary tale that's charming, frightening, tragic -- and in the end, life-affirming.

On World of Opera, Lisa Simeone presents Janacek's The Cunning Little Vixen in a production from the Maggio Musicale in Florence, led by conductor Seiji Ozawa. The stars include soprano Isabel Bayrakdarian as the Vixen, baritone Quinn Kelsey as the Forester and soprano Lauren Curnow as the Fox.

The Story Of 'The Cunning Little Vixen' 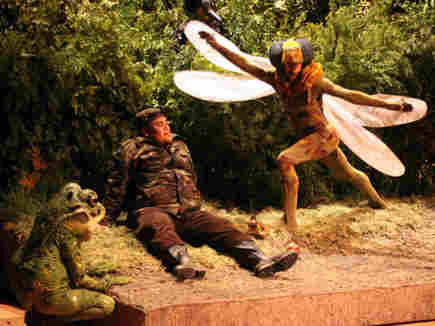 The opera begins and ends with the same scene: the Forester (Quinn Kelsey) sleeps while woodland animals gambole around him. Maggio Musicale Fiorentino hide caption 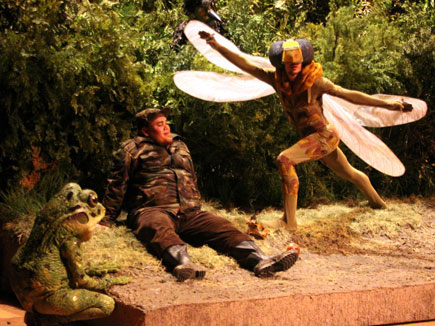 The opera begins and ends with the same scene: the Forester (Quinn Kelsey) sleeps while woodland animals gambole around him.

ACT ONE: It all begins on a sunny, summer afternoon in the woods. The Forester is taking a nap and around him, flora and fauna are in full swing. Crickets waltz, dragonflies buzz and a frog leaps after a mosquito, landing on the Forester's nose. He wakes to find a little fox cub and takes her back home as a pet for the kids.

In the Forester's yard, several months later, the fox cub has become a mature, and cunning, vixen. She discusses love with Lapak the dog, brushing off his advances. She also nips at the heels of the Forester's two children, Frantik and Pepik. The Forester ties the Vixen up and, as night falls, she dreams that she's transformed into a young girl.

At dawn, Lapak and the Rooster warn the Vixen not to be such an upstart. "You shouldn't have licked the dishes," the dog advises. The Vixen has advice of her own for the submissive hens in the barnyard. She says, "Friends, sisters, abolish the old order. Create a new world where you'll get your fair share." The selfish Rooster takes offense. A squabble breaks out, and the Vixen — true to her nature as a fox in the henhouse — begins killing the birds. The Forester and his wife put a stop to the commotion, but the Vixen bites through her leash, knocks over the Forester and escapes back to the woods.

ACT TWO: In the forest, the Vixen is hoping for a peek inside a luxurious badger burrow, but Mr. Badger says no way. Insults fly and the Badger begins pummeling the Vixen. After vociferous support from the local animals, the Vixen is spared. As repayment for her beating, she uses the Badger's burrow as a toilet, saying "Here's something feminine for you, just to show you I'm considerate!" That's enough to drive the Badger from his burrow, cursing the neighborhood as he leaves. The Vixen quickly slips into the abandoned space.

The scene switches to a local Inn, where the Forester and the Schoolmaster are at the bar playing cards, joined by the local Priest. The Forester sings a song about the passing of time and the men gently rib each other, commenting on events in their lives. Night falls, and a short interlude brings us to a forest path. The Vixen observes the tipsy Schoolmaster making his way home, mistaking a sunflower for a girlfriend. The Priest comes along, too. His mind wanders back to a girl he once knew. All are startled by a shotgun blast. It's the Forester, taking aim at the Vixen. 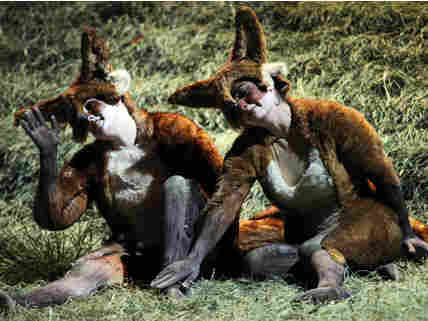 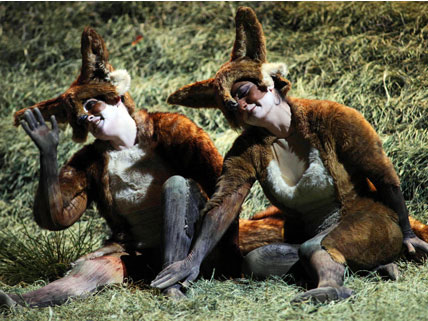 The Vixen (Isabel Bayrakdarian, right) with her mate, the Fox (Lauren Curnow).

The scene changes again, to the door of the Vixen's burrow. She hears rustling nearby. It's a male fox — and handsome, too. By the moonlight she tells him her life story. After a few awkward moments the two fall in love, and retreat inside the burrow. From above, an owl and a blue jay comment on the situation. Soon the two foxes emerge and announce their impending marriage, to be administered by the Woodpecker, and they celebrate with a rambunctious dance.

ACT THREE: Time has passed and now the Vixen has a family. The scene is a clearing in the forest. Harasta, the poultry dealer, sings a folk song, and notices a dead rabbit beside the trail. So does the Forester, who also spies part of a fox tail nearby. Thinking it must belong to the Vixen, he sets a trap and they both leave.

The Vixen, with her husband and their family of little cubs, sees the trap for what it is. When Harasta walks by with his bag full of poultry, the Vixen senses an opportunity. She feigns an injury. When Harasta goes for his gun, she lures him into the forest where he trips, falling flat on his nose. Quickly, the foxes dig into Harasta's poultry bag. But before they finish he returns with his gun, and fires. They all scatter, except for one — the Vixen, who lies dying.

Meanwhile, at the local Inn, the mood is melancholy. The Schoolmaster is sad to hear that the woman he fancies has married someone else. The Forester feels old age coming on, and they both miss their friend the Priest, who has moved away.

The opera's final scene reveals some of Janacek's most passionate, lyrical music. The Forester sets out for home, walking through the woods. A sweet memory comes back to him — of gathering wild mushrooms with his wife, as a young couple in love. "Is it real or a fairy tale?" he asks himself. At peace with his beloved woods and with himself, he lies down for a nap and the scene mirrors the very opening of the opera. Animals hover around him as he dreams about the Vixen. But as he reaches out to grab her, he finds only a frog, the grandson of the frog that landed on his face in Act One. The opera ends as the Forester quietly lets his gun slip to the ground.