Accessibility links
Obama Administration Accentuates The Positive The White House has been on a good news streak, accentuating the positive every day in areas ranging from Iraq to the BP oil well to the auto industry. On all of these fronts, serious challenges remain. The White House insists it is not hanging a "Mission Accomplished" banner too soon.

The White House has been on a good news streak this week, accentuating the positive every day in areas ranging from Iraq to the BP oil well to the auto industry. On all of these fronts, serious challenges remain.

The task for the Obama administration is to strike the right balance, emphasizing good news without seeming out of touch with the reality of the difficulties ahead.

The president's week began in Atlanta, where Obama told disabled veterans that he is bringing troops home from Iraq "as promised and on schedule."

While he said that challenges remain, he did not mention one of the biggest of those challenges -- that Iraq has no functioning government.

Tuesday morning, the op-ed page of The New York Times highlighted good news on the economy. A column by Treasury Secretary Timothy Geithner was headlined "Welcome to the Recovery."

"The New York Times wrote the headline, it wasn't the headline we suggested," White House Communications Director Dan Pfeiffer said in an interview. But he says the headline was not as significant as the full text of Geithner's column, "given what the op-ed actually said."

In the column, Geithner writes: "A review of recent data on the American economy shows that we are on a path back to growth." 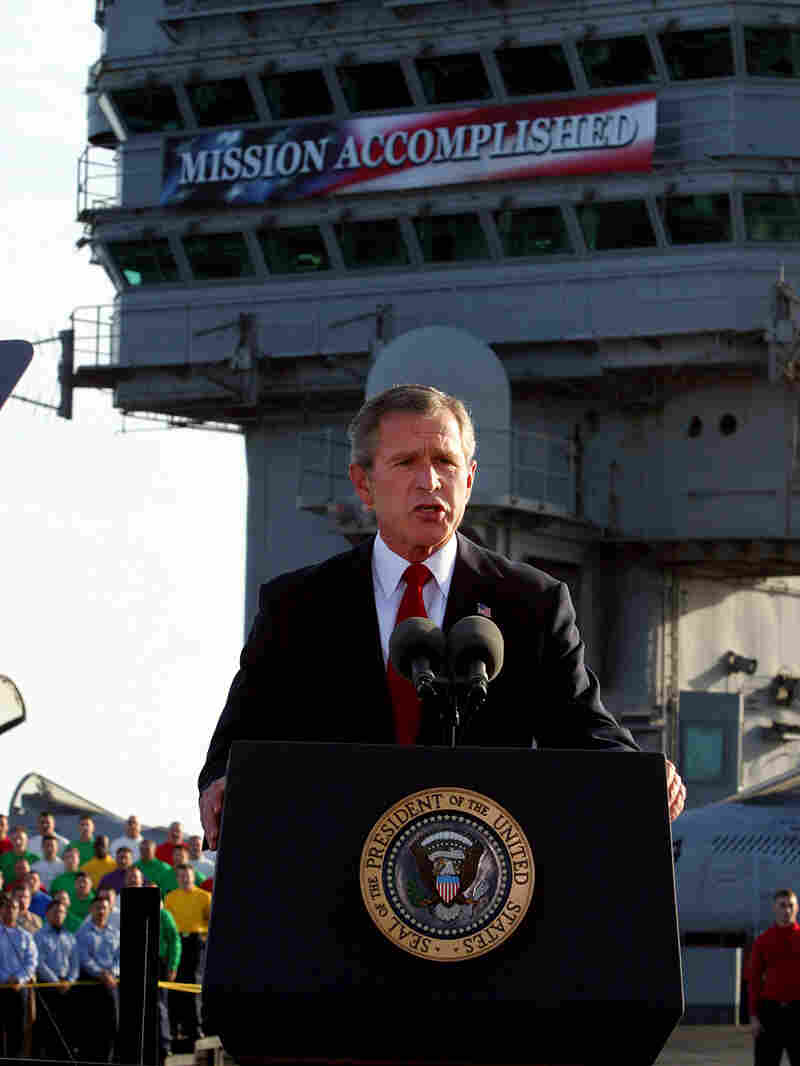 As the Obama administration heralds good news on Iraq, the economy and the oil spill, it risks prematurely claiming victory -- as President Bush did in 2003 when he declared "mission accomplished" in Iraq. J. . Scott Applewhite/AP hide caption

There were also paragraphs of caveats, such as "The devastation wrought by the great recession is still all too real for millions of Americans," and "We have a long way to go to address the fiscal trauma and damage across the country."

But nuance can sometimes get lost in the media churn, as Pfeiffer acknowledges. "Washington tends to view things only in black and white. They're either terrible or they're great. And I think the American people have a more nuanced perspective."

Wednesday, for the third day running, the administration emphasized the great over the terrible. In the daily White House briefing, spokesman Robert Gibbs and other administration officials spent two hours talking about good news from the BP oil well.

"Because of the environmental effects of Mother Nature, the warm waters of the Gulf and the federal response, many of the doomsday scenarios that were talked about and repeated a lot have not and will not come to fruition," said Gibbs.

Hanging over all of this good news messaging on Iraq, the economy and the BP well is a specter -- or, if you will, a banner -- reading "Mission Accomplished."

Pfeiffer and Gibbs both mentioned it unprompted.

"The president is not hanging up the 'Mission Accomplished' banner," said Pfeiffer.

"There are a lot of reasons why there's no 'Mission Accomplished' banner," said Gibbs.

The real "Mission Accomplished" banner hung on the USS Abraham Lincoln Aircraft Carrier when President George W. Bush told the American people on May 1, 2003, that "Major combat operations in Iraq have ended. In the battle of Iraq, the United States and our allies have prevailed."

"That's the type of thing I think the Obama administration has to watch out for," says former Bush White House spokesman Gordon Johndroe, who is now with the communications firm APCO Worldwide. "Not to tout victory in any area, domestic or foreign too soon."

When people accuse the Obama White House of viewing the world through rose-colored glasses, administration officials often blame the media for selectively choosing quotes that skew the message.

Johndroe sympathizes with them. "Whenever you're sitting in the White House, you're telling the press, you're telling anyone who will listen -- read the speech, please read the whole speech! But oftentimes people don't."

Thursday morning, Obama gave another positive speech, this time to workers at a Ford plant in Chicago.

"America's automakers have added 55,000 jobs since last June," he said. "That's the best job growth in more than 10 years in this industry."

But he also said, "Our economy is not yet where it needs to be."

Tracing The Highs And Lows Of The Bush Presidency Jan. 7, 2009