Accessibility links
Wyoming Considers Grand Teton Sale To Spur Feds The governor is threatening to sell off two parcels of state-owned land in Grand Teton National Park to private developers. The state wants the federal government to come up with a fair trade. The land is worth more than $100 million, but the state is hardly earning any income from leasing the land. 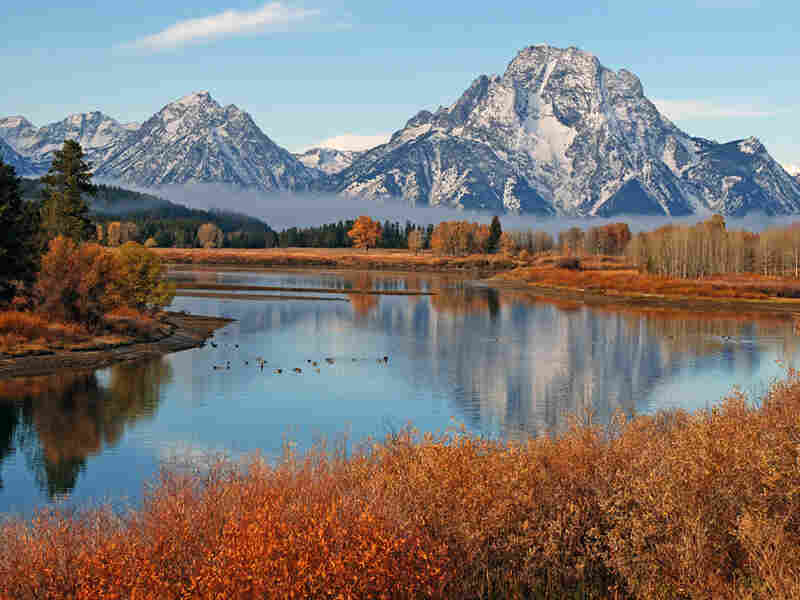 Fall colors on display in Grand Teton National Park. The governor of Wyoming is threatening to sell two state-owned parcels valued at $100 million in order to get the federal government to come up with a trade. Via Flickr by Jennifer Hall hide caption 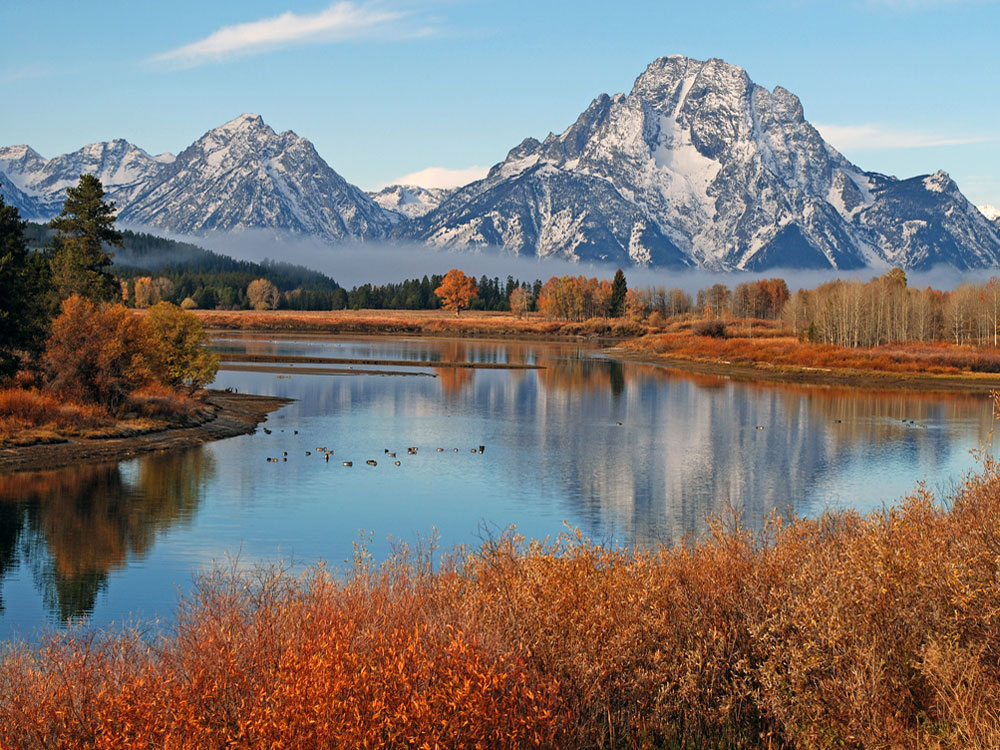 Fall colors on display in Grand Teton National Park. The governor of Wyoming is threatening to sell two state-owned parcels valued at $100 million in order to get the federal government to come up with a trade.

The governor of Wyoming is threatening to sell off state-owned land in Grand Teton National Park to private developers. He wants to pressure the federal government to come up with a good deal for the land.

The land inside the park consists of two parcels of roughly a square-mile each. They're known as state school trust lands -- they're supposed to generate funds for public schools, and are supposed to be "managed for maximum profit." The problem is that the land is worth over $100 million, but the state is currently only getting about $3,000 a year from grazing leases to a cattle rancher.

For more than a decade the state has tried to negotiate with the feds to trade the pristine park land for property of equal value, such as land that could be developed for coal. But Wyoming Gov. Dave Freudenthal says the federal government has not come up with a fair deal. So he decided to send a message.

National Parks And The Power Of A Photo

"If the federal government won't dance with us, we will go look for another partner," Freudenthal says. He is in the final months of his last term in office. He's a Democrat in one of the most conservative states in the country. Yet he's one of the most popular governors in state history. That comes from battles with the federal government over issues from energy to wolf management. Freudenthal says selling the land is not in the best interest of Grand Teton National Park, but he says it's time for the stalemate to end.

"The sole purpose is to force the federal government to come to the table and recognize that the state has other options," he says. "The way the federal government has treated us to date is that we are sort of like the people who own the land, but they figure there isn't anything else they can do with it, so we are going to use it for free inside the park."

Few Expect Land To Be Developed

Meanwhile, the Department of the Interior is saying very little about the matter, other than that it continues to work with the state to find a resolution. 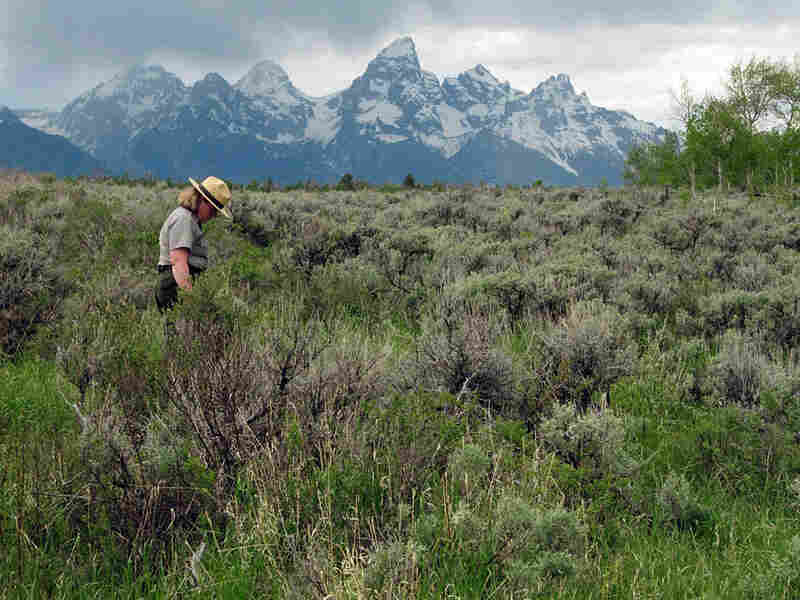 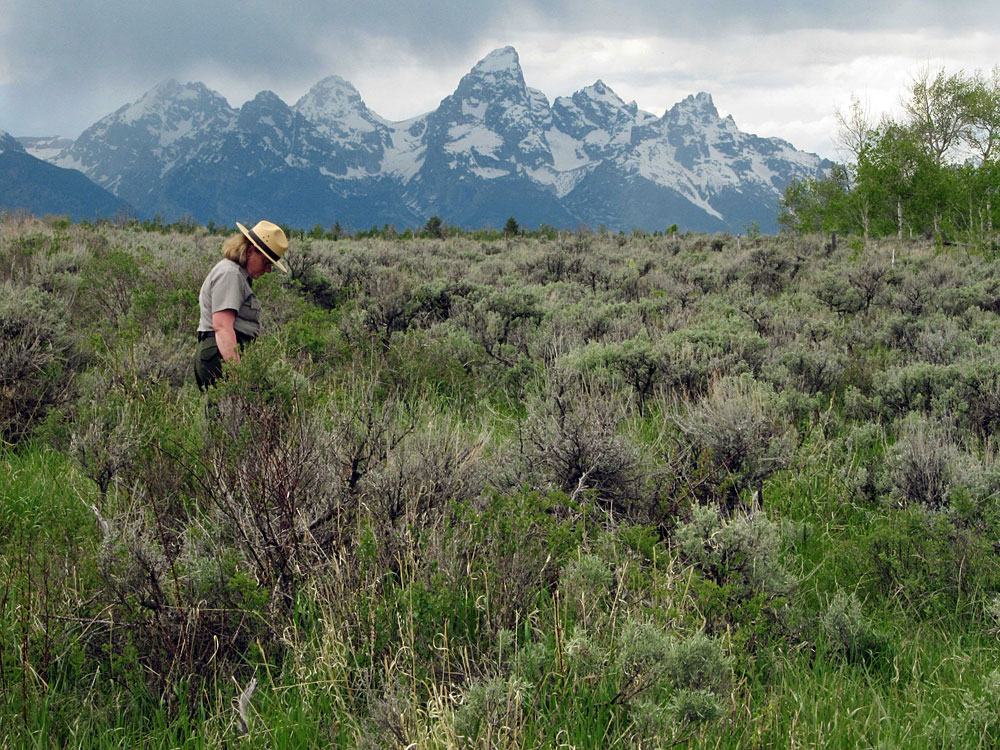 Jackie Skaggs, the public information officer of Grand Teton National Park, describes one piece of the state-owned land as having "wonderful rolling hills of sage-covered slopes and groves of aspens off in the distance. And then punctuating the western skyline are these serrated peaks that make up the Teton Range."

The state-owned land is beautiful. And most people here believe it should stay undeveloped and part of the national park. If it is sold to a private developer, 18 lots of 35 acres each could be developed on each of the two sections. Few in Wyoming think it will get that far.

Even Louise Lasley of the nearby Jackson Hole Conservation Alliance isn't too worried. She says actually selling to developers seems like a long shot: "I found it very difficult to imagine ... that would actually happen."

Agreeing To Appraise The Land

What is happening is that the state and federal governments have agreed to a joint appraisal to determine the property's worth, so that a proper swap may finally take place.

But state officials have been down this road before and say that they still may need to put the land up for auction this fall, to prevent the feds from stalling. They predict that the land would be very desirable to potential buyers, noting that they have already received at least one attractive offer.