Accessibility links
Fannie Mae Acted For Its Own Interests, Not Homeowners, Consultant Says A consultant says she was fired from Fannie Mae after she revealed the troubled financial institution was hindering -- not helping -- homeowners in trouble. She says Fannie Mae put its own agenda ahead of an Obama administration initiative to help homeowners avoid foreclosure.

A Fannie Mae consultant says she was fired after revealing that the troubled financial institution was hindering -- not helping -- homeowners in trouble. The former executive says Fannie Mae put improving its own bottom line ahead of an Obama administration program's goal of helping homeowners avoid foreclosure.

Here's a look at the number of foreclosure filings since the Home Affordable Modification Program began its first trial modifications in March 2009. Permanent modification of loans began in July 2009.

Fannie Mae runs the Home Affordable Modification Program, aimed at lowering monthly payments for deserving borrowers. But an investigation by NPR and the Center for Public Integrity found a whistleblower and others who say there are problems.

President Obama was in office less than two months when he laid out his $75 billion plan to help homeowners keep their homes.

"Through this plan, we will help between 7 and 9 million families restructure or refinance their mortgages, so they can ... avoid foreclosure," he said at the time.

Obama unveiled the plan in Mesa, Ariz., a city that has seen foreclosures rise as the economic crisis has continued.

But despite being designed to save the drowning, HAMP itself is barely treading water. A total of 389,021 homeowners had gotten the five-year respites as of June 30. In comparison, there have been more than 300,000 foreclosure filings in each of the past 16 months.

The Treasury Department oversees HAMP. But to run the program, Treasury hired Fannie Mae, the home-loan institution that is itself in federal receivership. Fannie is being paid $113 million to run HAMP.

And according to Caroline Herron, a longtime Fannie Mae executive who left the agency before returning as a consultant on the HAMP project, Fannie Mae ran HAMP to benefit its own bottom line, not to help troubled borrowers.

Herron is suing Fannie Mae, alleging that she was fired after she pushed for reforms in the HAMP program.

"Their only interest should have been to look out for the American taxpayers," says Herron's lawyer, Lynne Bernabei. (Herron isn't giving interviews because of a nondisclosure agreement with Fannie.)

"There was a tremendous -- millions and millions of dollars that was wasted on a program that a lot of people, Caroline included, said wasn't functioning in the way it should be," Bernabei says.

For example, Herron says in her lawsuit that Fannie Mae concentrated on the work that made money for Fannie Mae: giving new applicants "trial modifications" -- a few months of reduced mortgage payments.

Those applicants are meant to be moved from trials over to five-year relief plans. But Fannie made money on the trial modifications -- and thousands of homeowners got stuck there.

Gumming Up The Works

That imbalance was reduced in recent months. But in another example, the Treasury Department wanted HAMP to have a website where homeowners could upload documents and communicate with lenders.

This web portal was intended to bring order to a mortgage-modification industry that was choked in paperwork. It would let homeowners file online, where everything could be logged and managed. 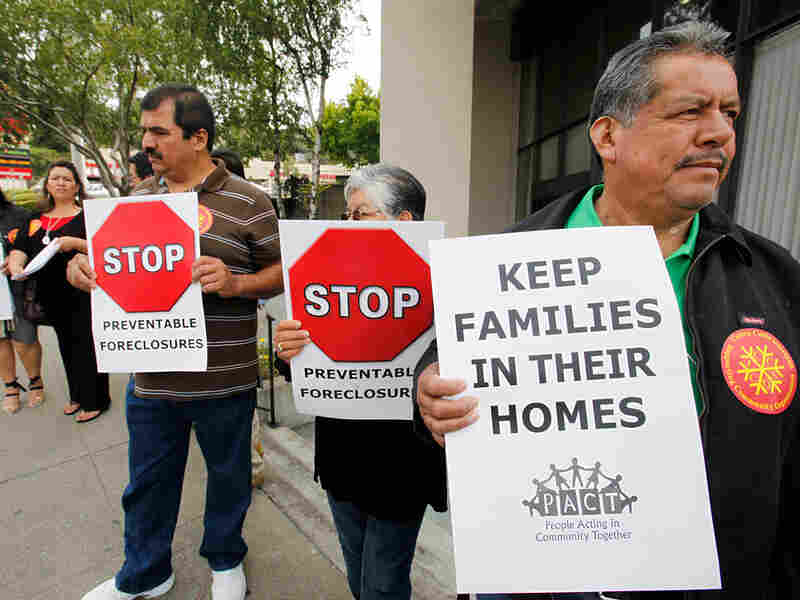 Demonstrators who have lost their homes to foreclosure or are under threat of foreclosure hold signs at a rally in front of JP Morgan Chase Bank in Oakland, Calif., last month. Paul Sakuma/AP hide caption 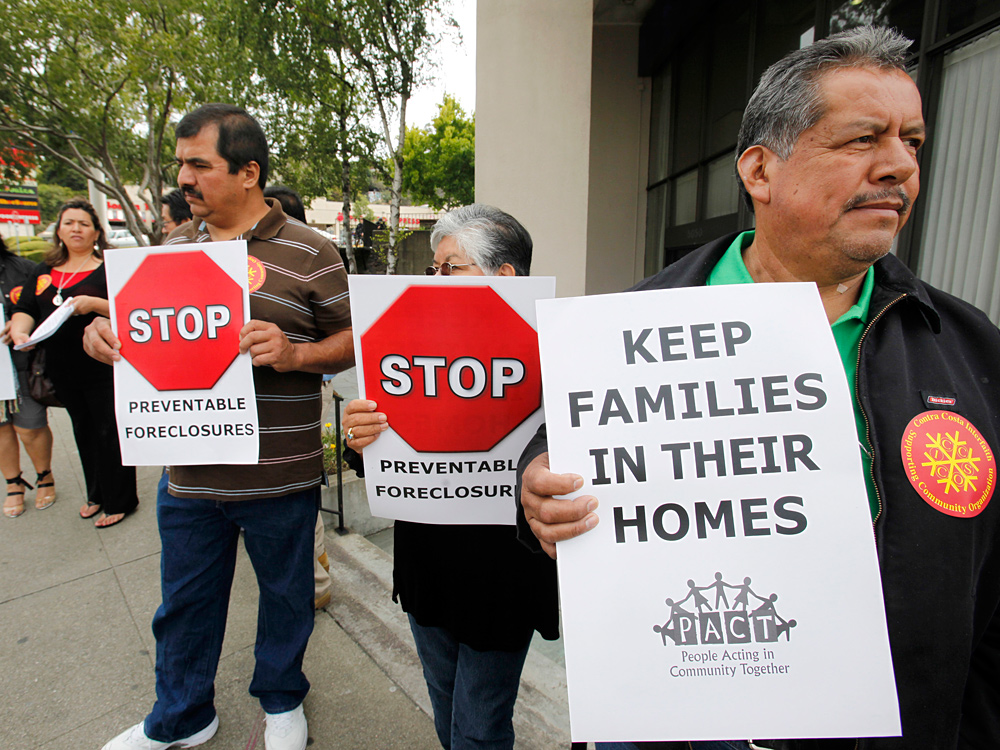 Demonstrators who have lost their homes to foreclosure or are under threat of foreclosure hold signs at a rally in front of JP Morgan Chase Bank in Oakland, Calif., last month.

A firm called Default Mitigation Management builds just such a Web portal. "We offered to deliver to them a solution that had already been working, that addressed all of their concerns," its chief operating officer, Igor Roitburg, says of Fannie Mae.

But after asking for bids, Fannie Mae scrapped the whole idea of the Web portal and picked another system -- one that drives homeowners to professional counselors for access.

Jack Guttentag, professor emeritus at the Wharton School, says that option just gums up the works.

"You have these intermediaries. You have counselors. It's a complicated and messy and inefficient process," he says.

As the portal project wound down, Fannie Mae fired Herron.

"She was with Fannie Mae for many years, rose to the level of vice president, was entrusted with some of their most sensitive projects," Bernabei says. "And now she doesn't have a job. She's been basically blackballed by Fannie Mae."

Officials at the Treasury Department and Fannie Mae declined to comment for this story.

A statement from Fannie Mae says the company hired a former Justice Department inspector general to investigate Herron's allegations. The company would not release his report, but it did say he found no merit to the complaint.