Accessibility links
Monopoly Game: Rules Made To Be Broken? The board game can teach players about economics, but maybe not in the way you'd think. The game is steeped in the industrial economy of the early 20th century. Now, the relevant economics lessons in Monopoly come from the side deals.

During the housing bubble, investors threw cash at real estate like it was Monopoly money. That may be an exaggeration, but perhaps not an extreme one. Generations of kids have been raised on the board game Monopoly, spending countless hours accumulating houses and hotels. Did we all learn bad lessons from years of passing Go and collecting $200? 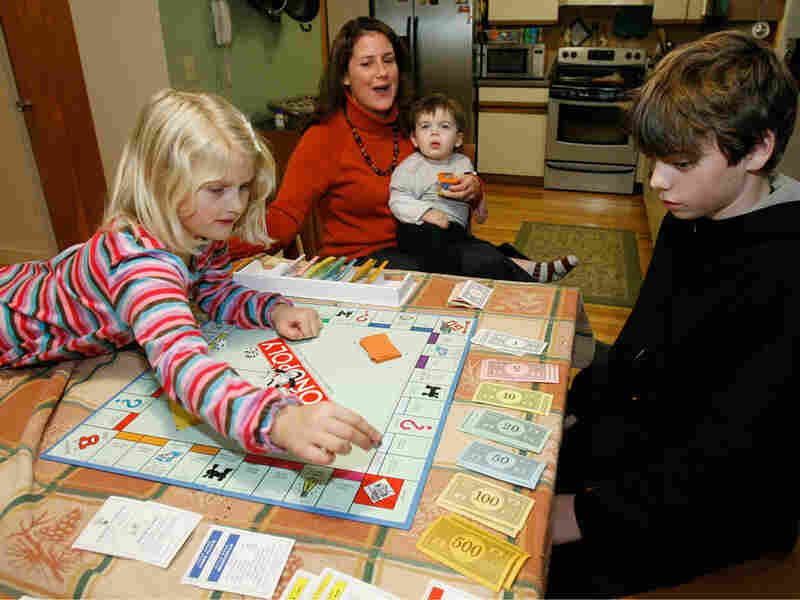 A family plays Monopoly in the kitchen of their home in Jericho, Vt. Toby Talbot/AP hide caption 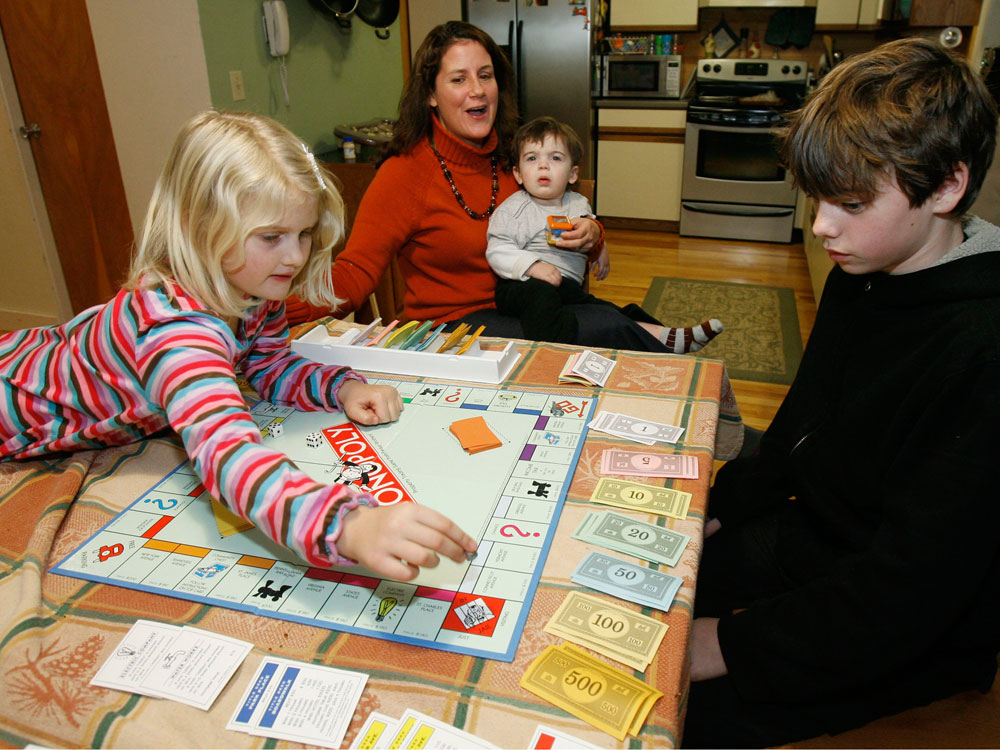 A family plays Monopoly in the kitchen of their home in Jericho, Vt.

If you think a regular Monopoly game takes forever, try playing with two economics professors. Just picking out the game tokens prompts a lesson in choice theory. According to one of them, it "illustrates a tremendous diversity of preferences in people, even about something as mundane as this."

As the game gets started, Dan Hammermesh of the University of Texas at Austin says he's "a top-hat guy." Russ Roberts of George Mason University says he prefers the car. The Scottie dog is not in high demand.

Both professors have played Monopoly since they were children but with very different takes on the game. Hammermesh avoids buying utilities and those nasty green-colored properties, while Roberts will snap up anything he lands on.

Hammermesh finds plenty of positive lessons for children who play the game.

"You learn decision rules, and maybe a little bit of optimizing under constraints," Hammermesh says. "Because the 1,500 bucks, you've got to make choices. And learning, for example, with 1,500 bucks, not to go buying railroads as Russ just did."

But Roberts, the proud new owner of Pennsylvania Railroad, has a pretty low opinion of Monopoly. He has written about how it presents a warped view of capitalism. There's no innovation, no mutual benefits -- it's all about grinding your opponents to dust.

"In Monopoly, a roll of the dice forces you to pay large sums of money to a landlord, who you don't know," Roberts says. "You're stuck losing money with no gain. The landlord gains money at no cost, and that's a very unrealistic lesson."

That doesn't stop Roberts from trying to cream his opponents, though.

Thinking about the educational value of Monopoly is not the strangest exercise.

The precursor of the modern version of the game was designed to teach lessons about the economy. Patented in 1904, it was called "The Landlord's Game" and was used to demonstrate how property owners could bankrupt their poor renters.

Parker Brothers later put out its version of Monopoly. In the new game, driving people out of business was a good thing.

But looking at Monopoly in post-recession 2010, the rules seem like a sure way to crash an economy: The bank can never run out of money, mortgages are easy to get, and when you build houses the rent always goes up.

"You might learn, if you are good at Monopoly, to think that real estate is a really good investment -- a strategic insight that would have served you very badly, at least recently," Roberts says.

Roberts now has Park Place and Boardwalk. Hammermesh has more new houses than an Arizona suburb. By now, the players are running out of cash, and this is when those stodgy Monopoly rules go out the window. Everyone starts wheeling and dealing.

Roberts offers up a share of the income from one of his properties: "It's a sure thing; it's triple-A."

"I view it more like a Greek government bond," Hammermesh says. "I'm afraid I can't take it."

It turns out that when you bend the rules, Monopoly starts to feel like a very shrewd educational tool. Now they're negotiating and thinking creatively.

Roberts, for instance, offers to bump up the rent on Mediterranean Avenue if it's taken off his hands.

Can he do that?

"Not legitimately," Hammermesh answers. "But it does show the kind of independent creative contracts that can be created in the real world and in this game."

At this point, the economics professors start talking about using options pricing theory and computer simulations to figure out the proper value for such a contract.

In the end, another classic Monopoly lesson is learned: When you talk too much, you run out of time and you never finish the game.