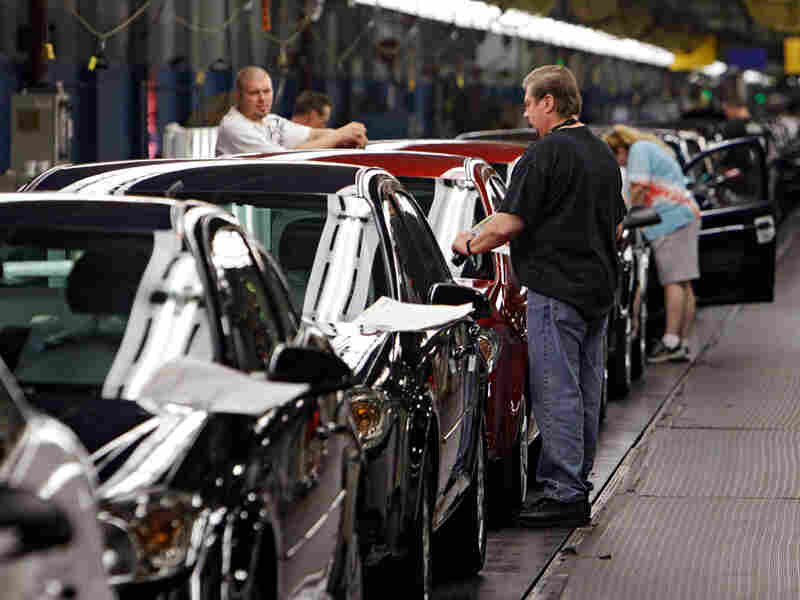 Workers at General Motors' assembly plant in Lordstown, Ohio, put the final touches on 2011 Chevrolet Cobalts. The manufacturing sector added 36,000 jobs in July, and GM decided to keep its plants running rather than temporarily shutting them down to retool for the new model year. Mark Duncan/AP hide caption 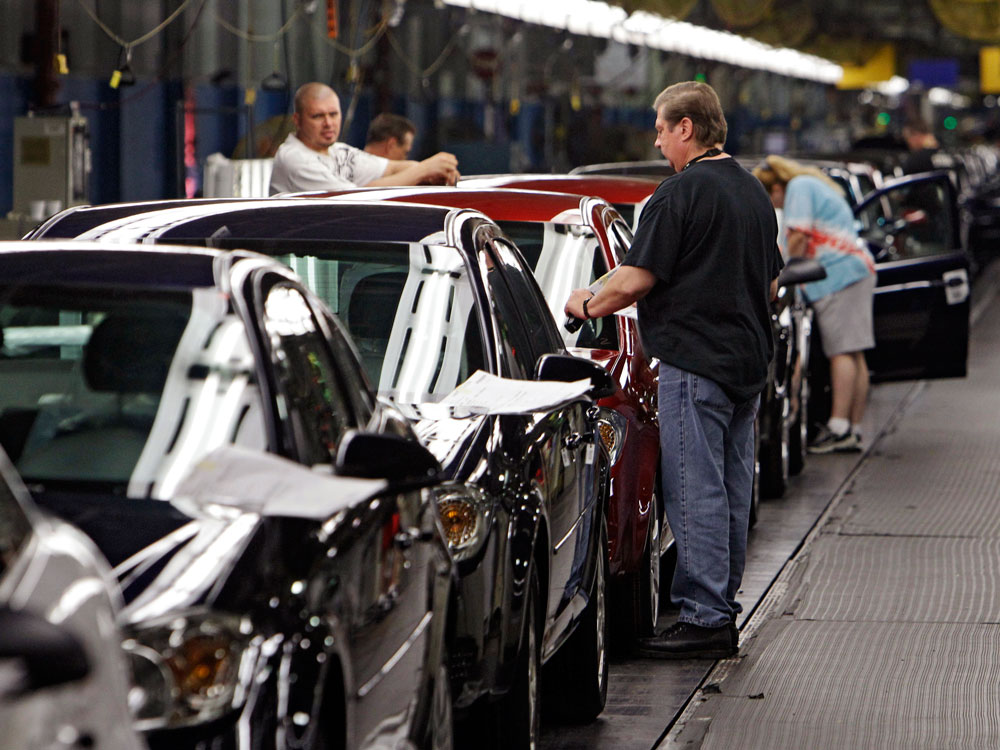 Workers at General Motors' assembly plant in Lordstown, Ohio, put the final touches on 2011 Chevrolet Cobalts. The manufacturing sector added 36,000 jobs in July, and GM decided to keep its plants running rather than temporarily shutting them down to retool for the new model year.

The nation's private employers added just 71,000 jobs in July, underscoring the picture of a labor market still struggling to emerge from recession. The jobless rate remained unchanged at 9.5 percent.

The Labor Department numbers released Friday also showed that the private sector hired only 31,000 workers in June, revised down from 83,000. May's numbers were raised slightly to show 51,000 net new jobs, up from 33,000.

Wesbury said that while the numbers are disappointing, he doesn't think the nation is heading toward a double-dip recession. "There are other pieces [of data] that have begun to turn," he said.

Unemployment, The Economy And The Chicken-And-Egg Conundrum Aug. 6, 2010

In a consumer-driven economy, high unemployment is a major obstacle to renewed growth. Consumer spending accounts for three-quarters of the economy, and without gains in income, many Americans are reluctant to open their wallets.

Average hourly pay rose 4 cents, to $22.59, up 1.8 percent from a year earlier. That, along with an increase in the number of hours worked, could provide some boost to spending.

"The government stimulus is beginning to wear off, we're just not seeing a lot of growth in the private sector, [and] the consumer remains cautious," Wyss said. "You just can't get very quick growth."

In total, 14.6 million Americans were looking for work in July. That's roughly double the figure in December 2007, when the recession began.

The "underemployment" rate – including people who are working part time but would prefer full-time employment as well as those who have given up looking for a job -- remained unchanged last month at 16.5 percent.

President Obama called the private sector job gains in Friday's report as a good sign but acknowledged that progress must come faster. 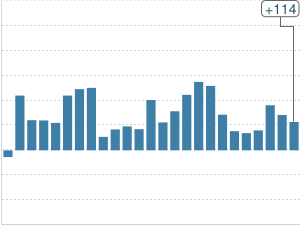 "Climbing out of any recession, much less a hole as deep as this one, takes some time," he told workers at Gelberg Signs in Washington, D.C. "The road to recovery doesn't follow a straight line. Some sectors bounce back faster than others."

"The monthly employment and unemployment numbers are volatile and subject to substantial revision," she said.

The number of temporary jobs fell by 5,600, the first drop after nine months of gains. Hiring temporary workers is typically a sign that employers are filling gaps to avoid new full-time hires, so a drop could signal a readiness to hire full-time workers, Wesbury said.

The manufacturing sector showed big gains, adding 36,000 jobs in July, slightly above its monthly average so far this year. General Motors' decision to keep its plants running last month rather than temporarily to retool for the new model year helped.

"We just lost government support for the housing market and that can cost us in the construction area … and in finance because of mortgage brokers," Wesbury said.

Corporate net income rose sharply in the second quarter, but businesses aren't yet using the proceeds to ramp up hiring. Companies in the S&P 500 index reported a 46 percent increase in net income for the April-to-June period, compared to a year earlier.

But many employers are uncertain about the direction of the economy. Some are concerned sales will slow once government stimulus and other temporary factors fade. Others fear what will happen if federal income taxes are allowed to rise next year as tax cuts enacted by President George W. Bush expire.

"People have a long worry list they're looking at," said Ethan Harris, chief economist at Bank of America Merrill Lynch.