Accessibility links
Bjork: A Celestial Voice The singer, as widely known for her eccentric outfits and behavior as she is for her voice, is easily the most famous Icelander in the world. Inspired by childhood adventures walking among lava fields, Bjork's music is full of stories about pitch-dark forests and tiny sparks that live within them. Her music may prove challenging to listen to, but there are always moments of beauty and transcendence. 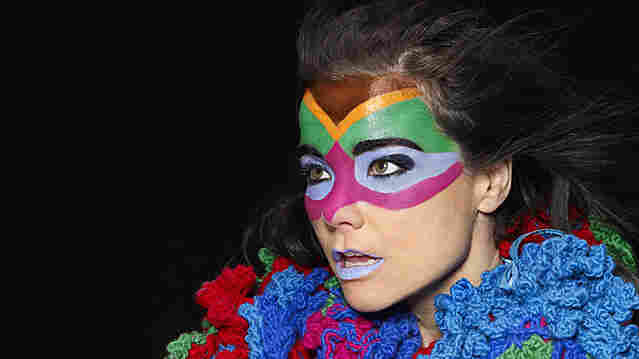 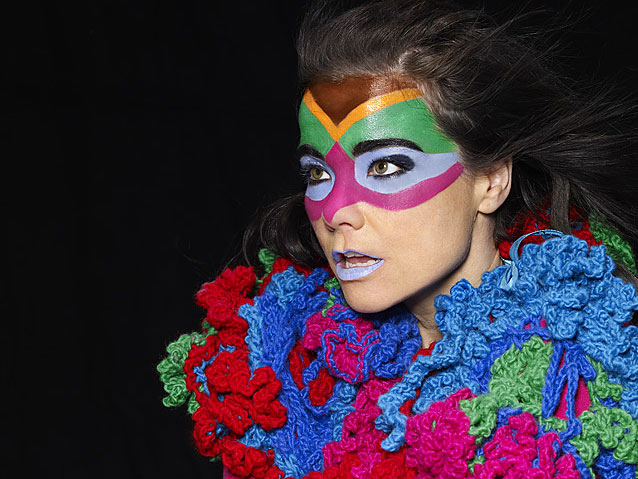 Icelandic singer Bjork is as famous for her eccentric outfits as she is for her transcendent voice.

Bjork, as widely known for her eccentric outfits and behavior as she is for her voice, is easily the most famous Icelander in the world. There's something celestial about that voice, as if it comes from a fantastic and colorful utopian world. Bjork compares her voice to her country, describing it as stark.

"Like in Iceland," she says. "You have the lava, almost no trees, almost no animals and almost no people, so things are very stripped down. It's very naked."

The singer's relationship to sound is abstract. Her voice is both powerful and visceral, but like her music, she can't quite explain it. Sometimes, it's challenging to listen to, but there are moments of beauty and transcendence in each of her songs. Thom Yorke, lead singer of Radiohead, says he wept the first time he heard "Unravel" from her 1997 album Homogenic. And Alex Ross, a music critic for The New Yorker, counts Bjork among the most gifted vocalists alive.

"This is somehow a voice that comes in from the north, that crosses vast spaces, that does have something ancient -- something very old in the grain of it," Ross says. "I cannot think of another voice like it in classical music, in pop music. It's instantly recognizable. You hear one or two notes from it and you know it's Bjork."

At 11, Bjork Gudmundsdottir was already a star in Iceland when she recorded a children's record in 1977. She remembers singing on the schoolbus on field trips.

"I'd be in the back and people would drive back and be sleepy, and they'd ask me to sing," she says. "My mom [complained] that she couldn't take me to a bus when I was 3 or 4 years old, because I would stand up on a chair and sing songs for everyone."

Americans first caught wind of Bjork in 1987, when she scored a cult hit with "Birthday," with a band called The Sugarcubes. It wasn't until 1992 that she broke out as an international superstar with the release of her solo album, Debut.

Hear The Story On 'All Things Considered'

Bjork's music instantly filled clubs across Europe and the U.S. Debut showcased her vocal range and her quirky sensibility -- lyrics about pitch-dark forests and tiny sparks that live within them and landscapes that evoked her own version of Grimm's fairy-tale world. Her words were inspired by her childhood adventures in Iceland walking among lava fields, and she still finds inspiration in nature today.

"I would walk alone and walk alone back," she says. "It would be basically about my spatial location, locating myself spatially and sonically and spiritually, and that's why I've always had to be kind of by nature when I'm writing."

With her voice, Bjork can shout, she can growl, and she can even spew utter gibberish, but it works. She uses the spaces in her melodies to ad lib, and allows her emotions to lead her. Her voice, the singer says, is like a home to her.

"Maybe that's without being conscious of it," she says. "When I walked outside as a kid and [sang], I was kind of sonically establishing being territorial and, 'OK, this is my home.' And singing quietly when I was next to the lava and then when I'd get up in a hill, the chorus would come and I'd sing louder. So I think it's my home."

Through Bjork's music, she allows us inside that home, too.