Accessibility links
Albuquerque Museum Memorializes The Atomic Age In honor of the 65th anniversary of the atomic bombings that ended World War II, Karen Michel visits replicas of Little Boy and Fat Man at the National Museum of Nuclear Science and History in New Mexico. 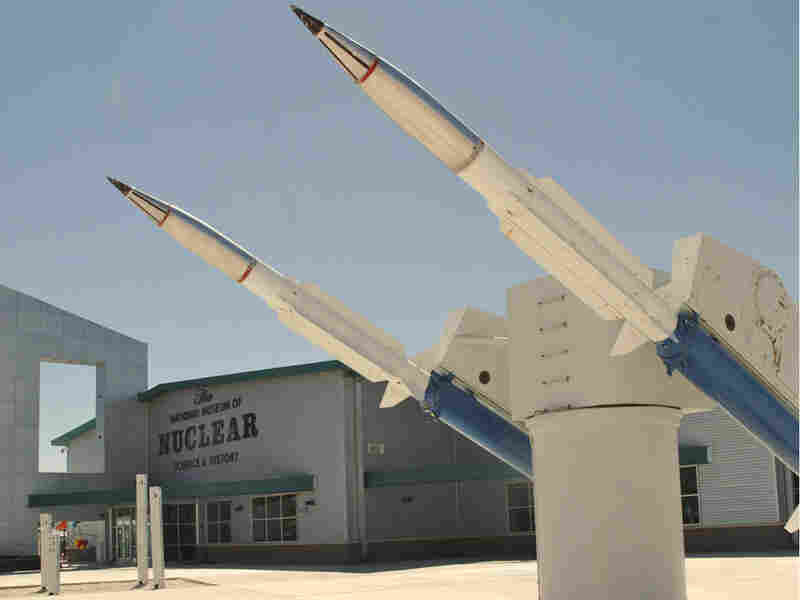 toggle caption
Courtesy of the Museum of Nuclear Science and History 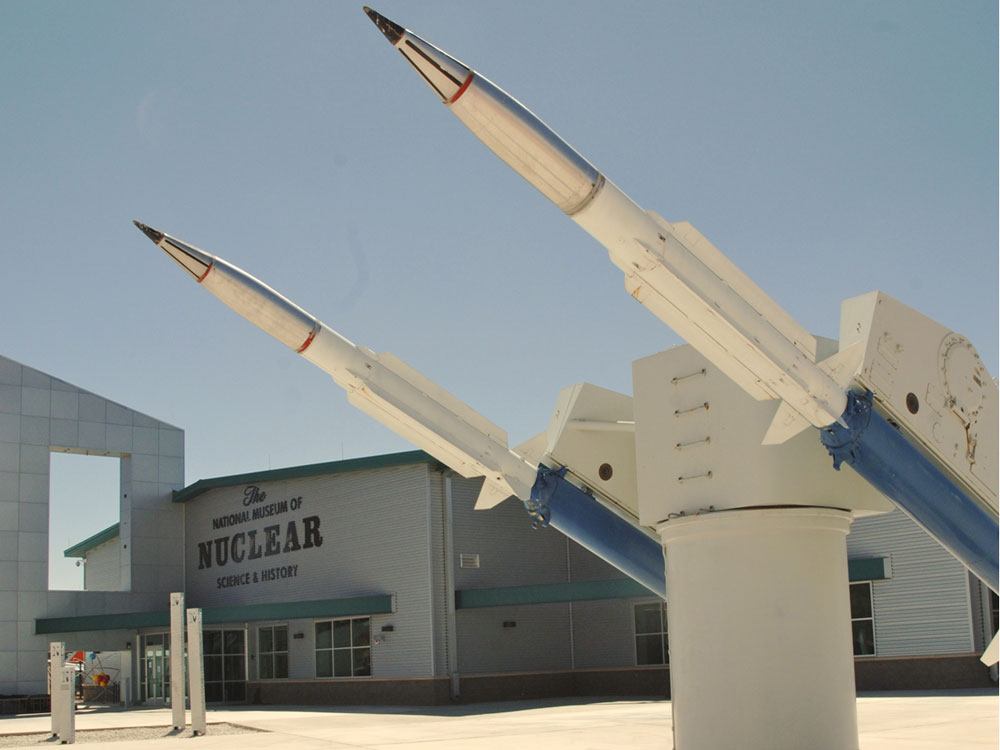 The National Museum of Nuclear Science and History, originally established in 1969, is a congressionally chartered Smithsonian affiliate.

Courtesy of the Museum of Nuclear Science and History

In Albuquerque, N.M., just off I-40 and across the street from a Costco, sits a building dedicated wholly to telling the story of the atom bomb.

The National Museum of Nuclear Science and History has exhibits that cover everything from medicine to Cold War pop culture to the science and history of the atom.

But on the 65th anniversary of the atomic bombings that ended World War II, it's the weapons that draw the crowds.

Andrew Starnes, an aficionado of all things atomic, and Tiffany Verbe say they were driving between New Orleans and Phoenix when an alert on Starnes' cell phone told him there was something nuclear nearby. They found the museum and headed for the Little Boy and Fat Man exhibit -- named after the bombs that were detonated over Hiroshima and Nagasaki, respectively -- for a photo op.

Why the photo op?

"Because it's a big bomb!" Starnes says. "I've always been intrigued by the nuclear bombs, and it's cool to see it. The actual size, it's really not that big, and all the destruction it made. It's pretty impressive that we can do that."

Of course, those aren't the real Little Boy and Fat Man. The real ones were dropped in 1945, killing tens of thousands of people.

What's on display at the museum are copies, and on a lectern just a few feet away from those copies, there's a journal for visitors to leave their impressions of the events that devastated two Japanese cities and are credited with ending the war.

"It's true, we can't re-write history and we can't fully understand years later," one visitor writes, "but I still feel it wasn't the best idea."

Another visitor penned her own memories of the time: "I was 4 years old on 12-7-1941. We did not start it, we had to finish it. Truman made the best decision."

As Museum Director James Walther notes, "You see both sides. Some people think it was a deplorable act [regardless] of whether another hundred thousand or million people would have been killed, and some people believe that it saved a lot of lives too. So it just depends on where you come from. It's not completely resolved in people's minds. People are still drawing their own conclusions about it, so perhaps when they visit the museum it will help them a little bit to determine how they feel."

Witness To The Nuclear Era 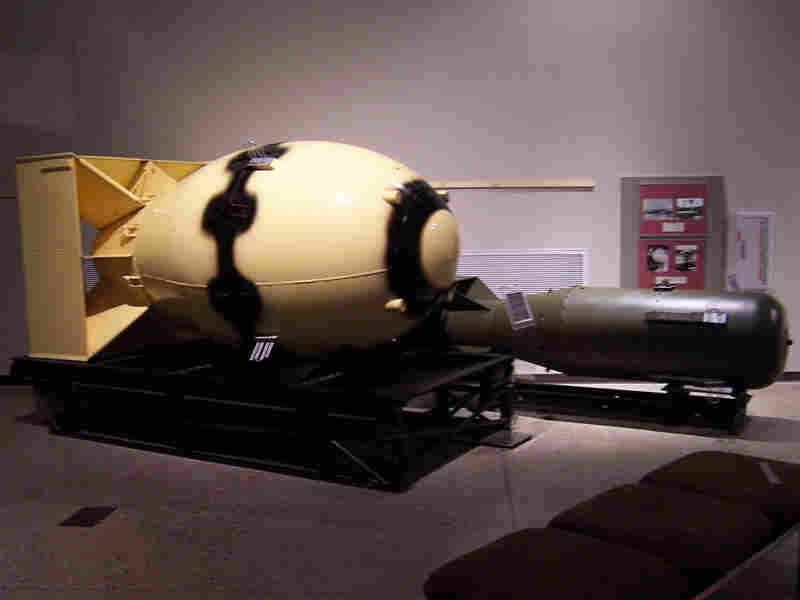 On Aug. 6, 1945, the U.S. dropped Little Boy on Hiroshima. Three days later, Fat Man was detonated over Nagasaki. Courtesy of the Museum of Nuclear Science and History hide caption

toggle caption
Courtesy of the Museum of Nuclear Science and History 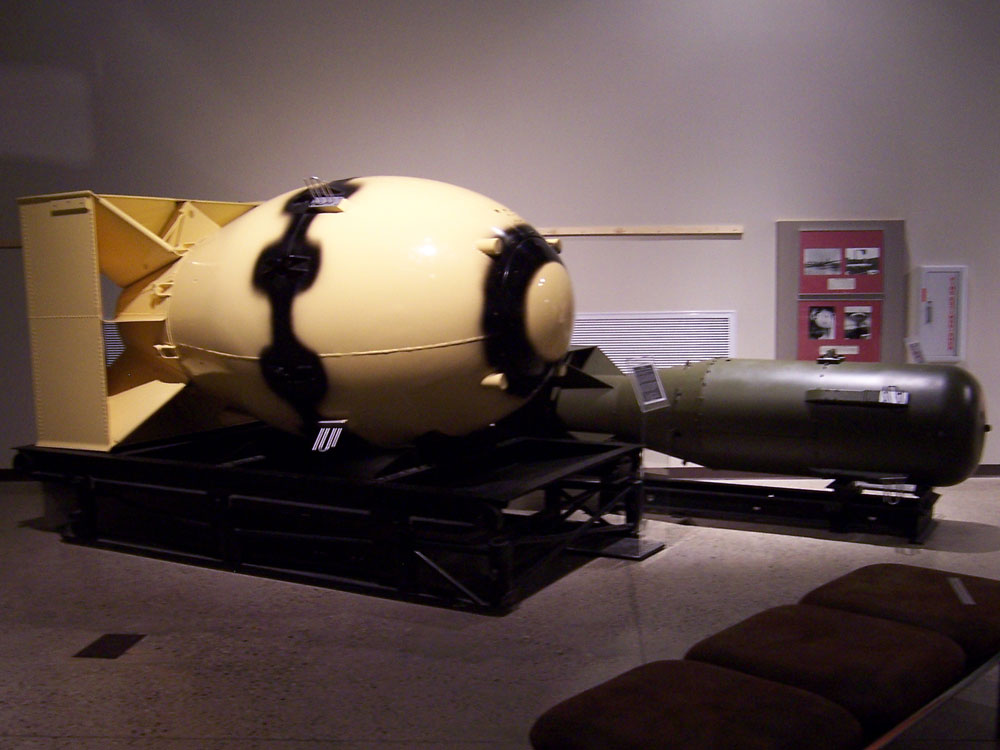 Courtesy of the Museum of Nuclear Science and History

Museum docent John Anderson circulates through the exhibits. Tall and white-haired, Anderson readily acknowledges his contributions to atomic warfare. "I have the unusual pleasure of seeing many of the things I've done in life now being presented to the public," he says. "I worked at Sandia National Laboratories [a nuclear weapons research and development lab] in various different capacities for 52 years. My life became very involved with the design and development and fielding, if you will, of many of the things we have on display here."

Another docent puts it this way: "Anderson's fingers are all over the place."

But for all the weaponry and hard science of Anderson's career now on display, there is also a sense of humor. The museum exhibits are infused with pop culture so you can watch black-and-white Cold War-era TV shows and hear atomic-themed music in styles that range from rock to spiritual to calypso. In one display, a singing turtle named Bert tells kids to "duck and cover" in case of a nuclear attack.

And if you want to know how you've been affected by the radiation that's already around you, you can visit the Geiger counter, which measures radiation emissions and goes bonkers when exposed to vintage orange Fiestaware or to the mantle of a Coleman camp lantern.

Better yet, you can take the radiation test for yourself.

And, of course, there's a gift shop that offers earrings and pins in the shape of Fat Man and Little Boy; a cocktail set of a few test tubes and a flask; yellow Geiger counters that aren't guaranteed to work; a flip book of the first manned landing on the moon; and a purple T-shirt with thick-, black-framed glasses on the front and the words, "Talk nerdy to me."

The Belly That Carried The Bomb

Outside the museum, there's an enormous space with airplanes and rockets and all manner of things that either go boom or help something go boom, including a B-29 -- the same kind of plane that dropped Little Boy on Hiroshima 65 years ago.

In the belly of that beast, Docent Olin Thompson looks up at the bomb bay and points out a limiting feature of the aircraft -- besides the cramped quarters. "You see that little passageway? That's where people that needed to move from the tail to the front in flight would move through, around the bomb," he says.

The passageway is maybe 2 feet wide.

It also takes some serious motivation. Thompson says there's only one reason to go to the front of the plane during the flight: "The only head in the plane was upfront."

Makes you wonder how often they just held it in.