Accessibility links
Wilkommen, Bienvenue, Welcome: To Cabaret School Recent visitors to New Haven may have been greeted with an unusual sight: not the stressed-out Yalies, but singers from across the world uniting for the International Cabaret Conference, now in its eighth year. Run by a former club owner and taught by a who's who of cabaret superstars, it offers singers the chance to hone their craft. 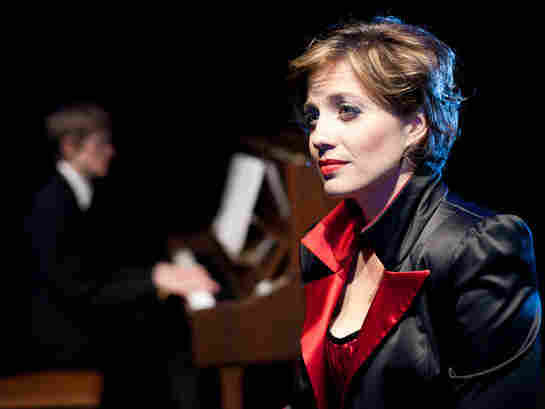 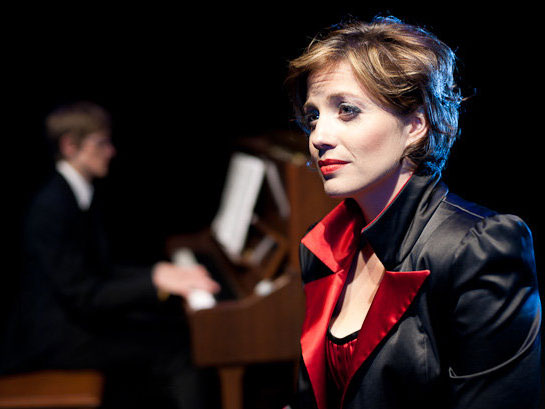 Canadian singer Lindsay Sutherland Boal started out in opera before turning to cabaret.

The word "cabaret" evokes many images -- singers dressed to the nines, elegant nightclubs, intimate rooms, exorbitant cover charges and two-drink minimums. What it doesn't evoke is college dormitories, dining halls and 9 a.m. classes. But for the past eight summers, aspiring singers have gone to New Haven, Conn., to attend a sort of cabaret boot camp: the International Cabaret Conference at Yale.

The conference's artistic director, Erv Raible, has gone to the cabaret almost every night for the past 30 years -- he's been a club owner in New York, and he coaches and directs singers. Raible says cabaret may be a rarified medium, but it also can be deeply emotional.

"The intimacy of it, I think, is the most important part," Raible explains. "The fact that, unlike any other genre in the entertainment world, you actually go into a room where you go out of there feeling like you know the person, you know something about them, they have touched your heart."

Harold Sanditen, 'Me and Mrs. Jones'

Learning how to effectively touch the heart may be the central goal of the nine-day conference, but the 38 students also take classes in repertoire, hair and make-up, clothing, sound, lighting and marketing. Their ages range from 16 to 66, and they come from all over the United States and around the globe.

On a drizzly July afternoon, Raible introduces the faculty and students to one another in the dorm's basement. One of them is Nikki Aitken, a tiny Australian dynamo with a big voice. At 32, she's already explored other performing disciplines; cabaret was the next logical step.

"My training has been in classical, jazz and musical theater," she says. "[Cabaret] seemed to be the obvious choice -- to be able to take all the different kinds of repertoire and put it into one show."

That evening, in the first rehearsal, Aitken struts her stuff. And she's not the only one: All across the Yale campus, singers are hunkered down with some of the best music directors in the business to prepare their first presentations to the faculty, which includes Laurel Masse, an original member of Manhattan Transfer, the Tony Award-winning actress Faith Prince, cabaret legend Julie Wilson and actor-singer Jason Graae.

The next morning, student Harold Sanditen performs a decidedly different take on the Beatles' "We Can Work It Out" -- delivering it as a ballad. Prince likes it, but sees room for improvement. 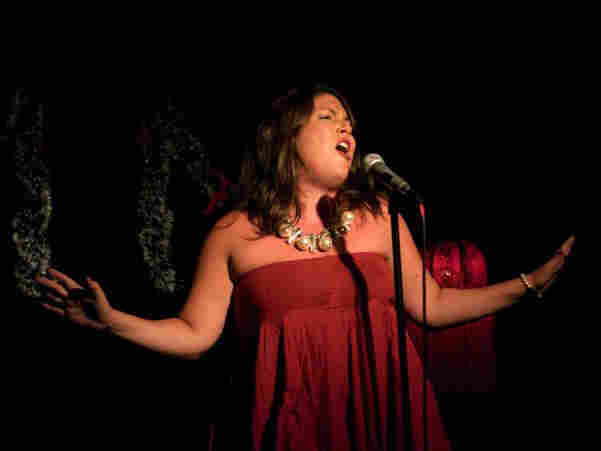 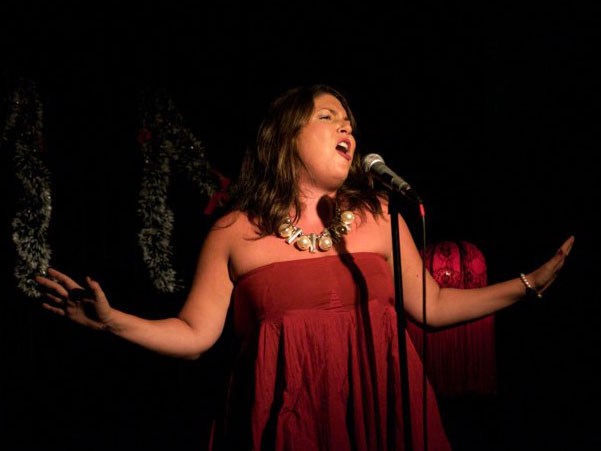 "I need you to not close your eyes," she says as Sanditen reaches the song's chorus. "I feel like you're closing your eyes on the most important contact."

At age 55, Sanditen has traveled a long way -- literally and figuratively -- to come to Yale. He used to be an investment banker, but then decided his true passion lay in show business. He became a theater producer in London. Then, after 20 years in the West End, he began singing as well.

"Which is what I wanted to do in the very first place, but I never had the confidence," he confesses.

Canadian singer Lindsay Sutherland Boal, 33, has come a long way, too. She trained in opera, but changed her mind -- right in the middle of an audition. 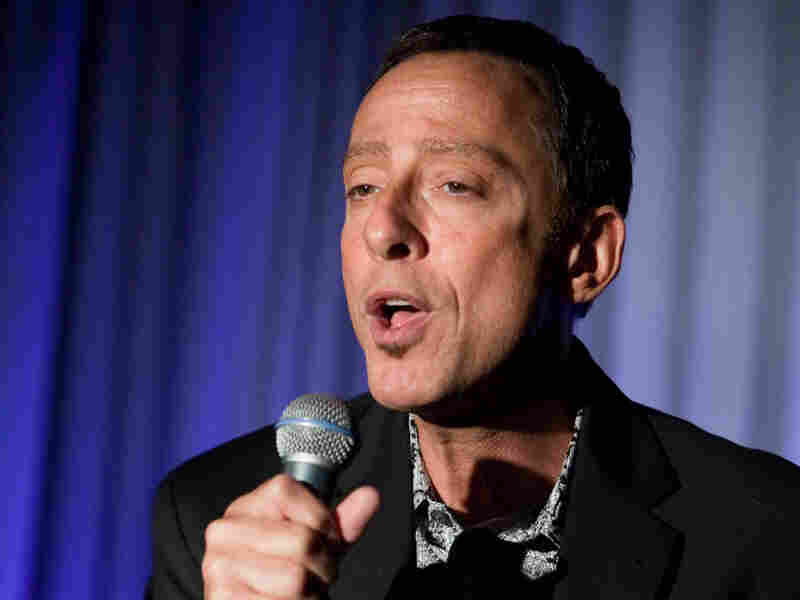 Harold Sanditen was a theater producer in London for 20 years -- and an investment banker before that -- before taking up cabaret. He performed his first solo show, The Secret of Life, in New York in September 2008. Jack Ladenburg hide caption 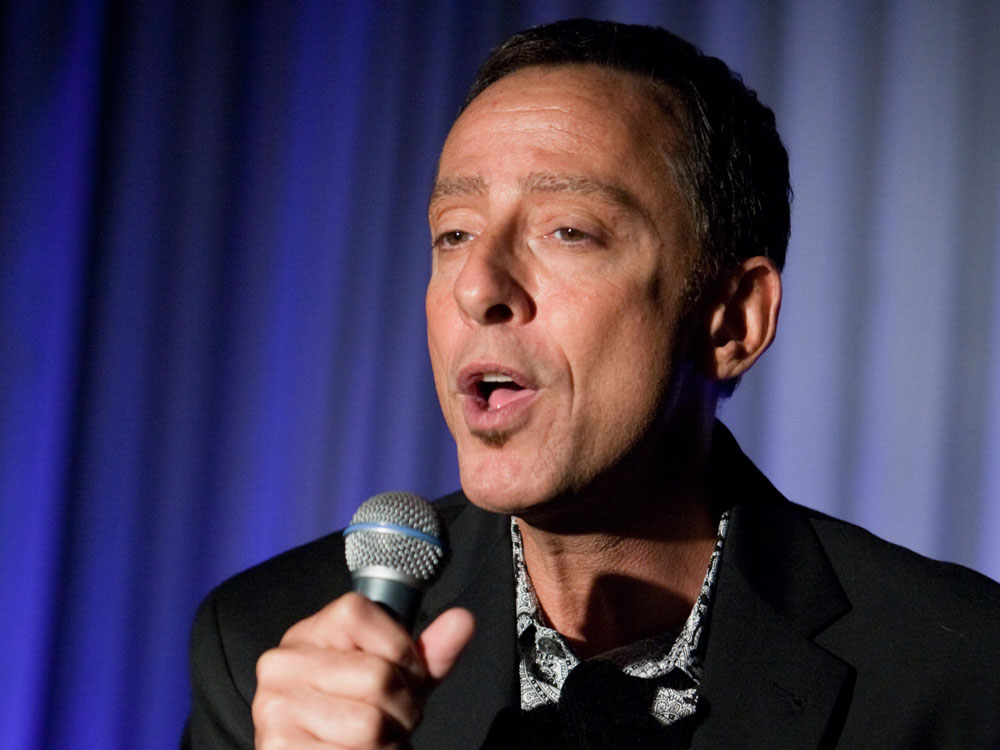 Harold Sanditen was a theater producer in London for 20 years -- and an investment banker before that -- before taking up cabaret. He performed his first solo show, The Secret of Life, in New York in September 2008.

Over the course of a week of 14-hour days, the teachers work hard to rid Boal of some of her operatic habits, such as her tendency to use broad acting gestures. Her coach, music director Alex Rybeck, reminds her that cabaret stages are generally smaller than opera houses.

"You're a very rich cake," he tells her. "Your cake doesn't require a lot of icing."

His prescription: Keep it simple. "The more stuff you do, the less we get you."

Across campus, Nikki Aitken is preparing for the final concert -- and her rendition of a song Barbra Streisand made famous. She says she's learned a lot about what makes for a truly great cabaret performance: "finding specificity and finding truth and finding ways to make it about the audience."

But Sanditen says it's not just about digging deeper.

"Probably the best thing I've learned is that songs you think are really serious, you can find comedy in them," he explains. "You can make something that nobody has ever sung as anything but a serious ballad, you can make it into a comic tour de force."

On the last night of the conference, all the students have three minutes to show what they've learned in front of a paying audience. The concert is called "Cabaret Stars of Tomorrow." Boal performs in a striking red bustier, but sings her number -- "I'm a Stranger Her Myself" -- with a newfound stillness.

Sanditen puts his insight, the one about digging comedy out of a ballad, to work with a riotous reading of "Me and Mrs. Jones" -- one that adds a third dimension to the song's story of a bad romance.

Aitken takes on a classic: "Don't Rain on My Parade," from Funny Girl. Displaying immense focus, she pretty much hits it out of the park.

"I think I've learned ten-fold, a hundred-fold, a million-fold [from this conference]," she says. "It's rocked my world." As for the students? "I think they did incredibly, deliciously wonderful."

And who knows? Maybe some of them will in fact be cabaret stars of tomorrow.