Accessibility links
Bloggers And Cable Pundits: The New Newsmakers This summer, more than ever, some of the biggest news stories have been driven by new media players. Ideologically motivated bloggers on both ends of the political spectrum and their counterparts on cable news have proven to have the power to drive the national news conversation -- forcing old-school news executives to play catch-up. 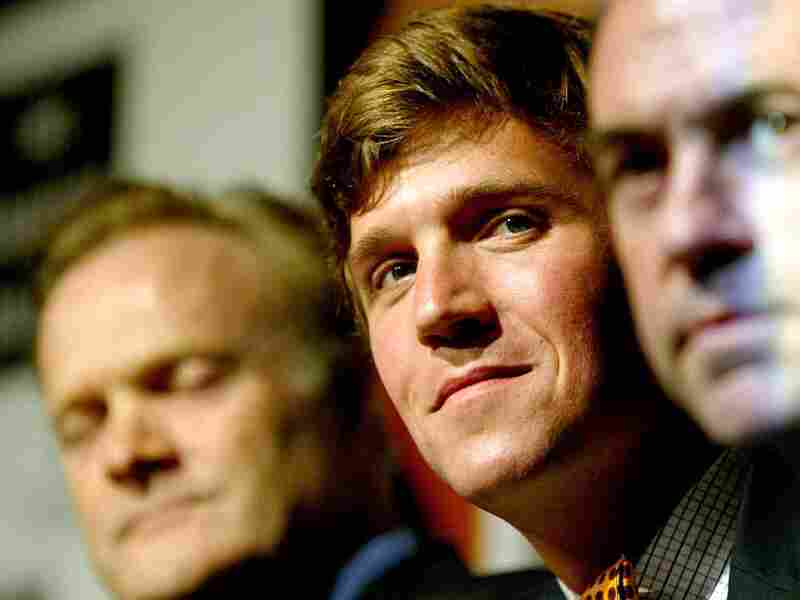 In a controversial move, conservative writer and pundit Tucker Carlson published private e-mails that had circulated on JournoList -- a forum for journalists -- on his political news site, The Daily Caller. Paul Hawthorne/Getty Images hide caption 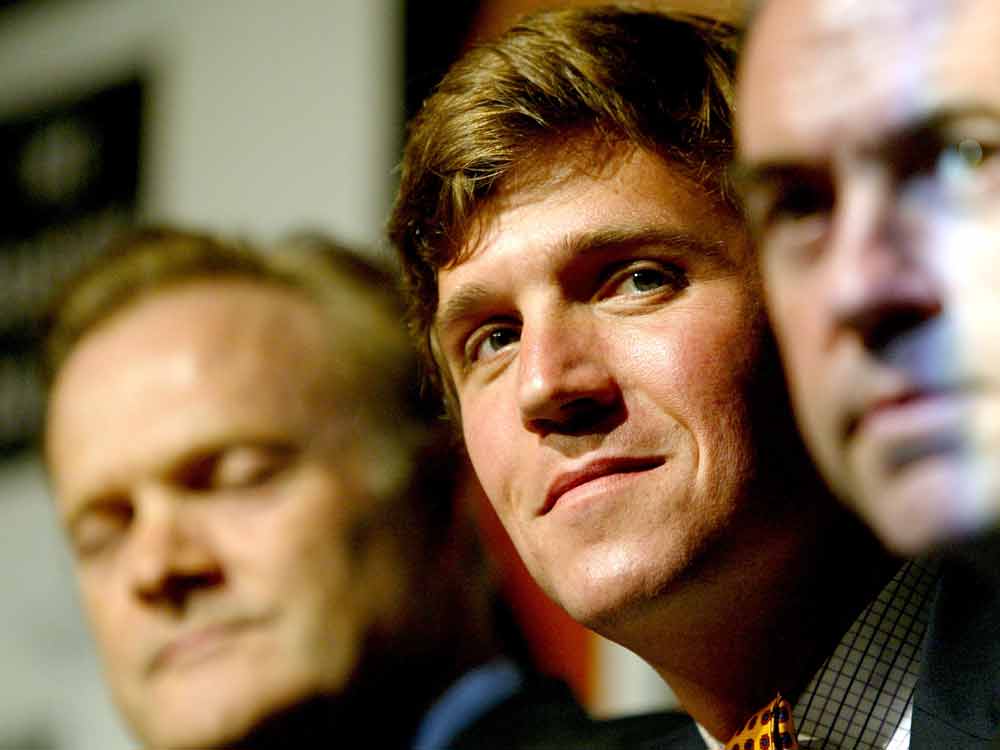 In a controversial move, conservative writer and pundit Tucker Carlson published private e-mails that had circulated on JournoList -- a forum for journalists -- on his political news site, The Daily Caller.

This summer's lurching news cycle has served up fresh evidence that the legacy media have less say than ever in determining what stories to consider newsworthy -- and which not to.

Instead, as new media players drive much of the news agenda, old-school media executives are being forced to play catch-up on things like voting suppression allegations against black separatists, claims that journalists are secretly colluding to aid liberal causes, or rumors of NAACP support for reverse racism.

"One thing new media do fairly effectively is remind places like the Post and the Times ... that there are stories outside the conventional purview of what they consider news," says Tucker Carlson, a conservative libertarian writer and pundit, and founder of the new site The Daily Caller.

Yet mainstream media have also shown they are capable of wresting back the story when they take the time to flex their reportorial muscle.

"Ah, reporting. That's a good word," says Bart Feder, CNN's senior vice president for current programming. "The noise has increased and the speed has increased, but I honestly believe the fundamentals are the same."

Three episodes help to illustrate the different elements of the new news cycle.

The first begins back on Election Day 2008 when Stephen Robert Morse set out with a camera in search of fraud and other improprieties.

"Philadelphia politics are dirty," Morse says now. "That's what it comes down to."

Morse had graduated from the University of Pennsylvania a year earlier with a degree in English, and he's currently a registered independent who blogs about census issues at mytwocensus.com.

But back in 2008, he was a registered Republican serving as an election monitor for the Philadelphia GOP. He was bored for much of the day, until a caller to the party's city headquarters complained that two men dressed in paramilitary garb weren't allowing him to vote.

The two men were part of a tiny hate group called the New Black Panthers. The claim that they denied anyone the right to vote was never proven, but one clearly carried a nightstick.

"I started rolling right away and said, 'Wow, this has to be a story,' " Morse recalls. The video was eventually posted on a Republican elections blog.

On Election Day, the incident became a modest story, with Fox News' Rick Leventhal reporting from the scene. But it was clearly Morse's video that inspired a federal inquiry and criminal charges, some of which were dropped. Some coverage ensued, but it wasn't until a Republican former Justice Department lawyer attacked the Obama administration over its handling of the case that the conservative blogosphere and talk show world exploded -- and the New Black Panthers were suddenly cable news gold.

Editors at papers like The Washington Post found themselves on the defensive as they were criticized for their insufficient coverage of the story, which they ultimately acknowledged.

In another episode, The Post was among the publications more directly embarrassed by the JournoList scandal in which Carlson's Daily Caller published a series of stories with excerpts from e-mails sent among members of JournoList, a wonky, liberal list serve that several hundred journalists, academics and policy experts belonged to.

Some were caustic or even hateful toward leading conservatives, including blogger Matt Drudge, radio host Rush Limbaugh and former Republican vice presidential nominee Sarah Palin. The e-mails were supposed to be private, affording more expansive debate -- but Carlson thought nothing doing.

"There was coordination among liberal journalists on behalf of Barack Obama the candidate at critical points during the last campaign -- not continuously -- but when it mattered, there was," Carlson says. "That's not journalism, and the people who engage in those conversations or those actions are not journalists. They're political activists."

Slate's Mickey Kaus, a Democrat who loves to torment liberals, is among those who has written critically about JournoList for a while. But the story got little traction. Once The Daily Caller printed the e-mails, however, other sympathetic sites and radio talk show hosts picked up the story -- as did, of course, Fox News, where Carlson is a contributing commentator.

Dave Weigel was a relatively new hire at The Washington Post when The Daily Caller published the e-mails. He was supposed to cover conservatives for the paper, but he became a casualty of the scandal when it was revealed he had privately attacked some conservative figures on the list serve. He now writes for Slate.

Some debate has broken out online, on television and in the pages of established newspapers over how serious a scandal the JournoList flap really is. Carlson points to those e-mails sent amid the hard-fought 2008 Democratic primary as particularly damning. In those e-mails, several list-serve members wrote to suggest ways that Obama could be protected from fallout in the wake of videotapes showing racially divisive remarks made by his longtime pastor, the Rev. Jeremiah Wright.

Many of the most heated participants were opinion writers, columnists, or were associated with publications that have a point of view, including Mother Jones, The New Republic or The Nation.

Carlson says such distinctions are beside the point.

"I don't care if you're a columnist or an op-ed writer or a straight news writer covering night cops. That's wrong," Carlson says. "It's a clear sign that you are not independent, that your ultimate fealty is not to the truth."

Carlson says people can have ideological beliefs, as he does, without any ties to political parties or candidates.

"I would be every bit as shocked if I found an e-mail in which George Will ... said, 'I'm not going to report that because it might hurt John Boehner or George W. Bush,' " he says. "I would find that shocking. That would be, I think, a betrayal of his charge."

As it happens, back in 1980, when he was already a Pulitzer-winning conservative columnist for The Washington Post, Will did privately help Ronald Reagan prepare for a debate with then-President Jimmy Carter. It was not an entanglement Will disclosed to readers when he praised Reagan's performance in that debate. (Carlson, 41, says he's not familiar with that episode from three decades ago.)

Carlson says he's defended the media for years against conservative claims of liberal bias, but the JournoList revelations have proved him wrong.

Yet the cycle now at work involves a conservative blogosphere, radio talk show circuit and cable news punditry for which liberals -- for all the success of The Huffington Post and the newcomer anti-war site Wikileaks -- do not have a rival.

But even that cycle was upended a bit during the saga of former U.S. Agriculture Department official Shirley Sherrod. Conservative activist and blog entrepreneur Andrew Breitbart -- whose sites pushed both the New Black Panther and JournoList controversies -- posted the now infamous video clip in which Sherrod seemed to tell an NAACP conference of a time when she had discriminated against a white farmer.

Breitbart called the speech a classic example of reverse racism by Sherrod and the NAACP. Bloggers and commentators angrily weighed in. Within the day, her federal bosses had stripped her job away and the media was consumed by the story.

CNN executive Bart Feder said journalists at his network had qualms, even as the story was playing out so quickly.

"The fact that no one at that point had seen the full tape suggested, to us at least, that that would be essential to understand what she had said, what the context was and why she had resigned," Feder says.

He says his networks' producers chased Sherrod for hours. The next morning, she spoke on the air for the first time, publicly claiming her remarks had been terribly distorted.

As CNN and The Atlanta Journal-Constitution revealed bit by bit in ensuing hours, her remarks at that NAACP conference did indeed include a redemptive tale of how she learned to see past race, and how she aided that white farmer. He later appeared on CNN as well to vouch for her honesty and friendship.

Feder says CNN is proud of its reporting -- but that this is the way journalism should always work.

"You have to be prepared to look wherever the story takes you, and not just where you have a hypothesis that says, 'I really believe this, so I'm going to go prove my point of view,' " Feder says. "I think we just have to be even more vigilant now about that."