Accessibility links
The Root: The Other Mad Men According to Michael Ross of The Root, if the show's creators are really sticklers for detail, there's reason to expect some darker faces at Sterling Cooper Draper Pryce before long.

The Root: The Other Mad Men

The Root: The Other Mad Men 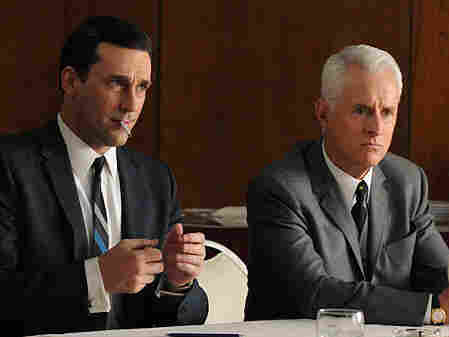 Michael E. Ross is a frequent contributor to The Root.

The start of a new season of Mad Men has had its loyal followers wondering what's next for the talented but conflicted alpha male Don Draper as he leads a group of disaffected executives in the launch of a new ad agency on Madison Avenue.

In its past seasons, the Emmy-nominated series deftly revealed personal and professional dramas against a backdrop of the social and political changes in Kennedy-era America. Now, with season four opening after Kennedy's death, the question is, will Mad Men tweak its focus and more fully show life in America during the period of the struggle for civil rights, the most tumultuous domestic issue of that era?

It's been accepted more or less as a truism that black people didn't work on Madison Avenue in the 1960s. But facts are stubborn things. There were black people in advertising even then, some (a few) in high places. Contrary to the popular assumption, blacks in that era met with success and challenges on Madison Avenue, like everywhere else.

In January 2009, The New York Times reported on a news conference in Manhattan convened by activist lawyer Cyrus Mehri and the NAACP, a gathering to announce the release of a 100-page report on race and employment practices in the advertising industry. The report was part of the Madison Avenue Project, spearheaded by Mehri and the NAACP to force increases in the small numbers of minorities in advertising.

At the news conference, Sanford Moore, a former employee of the prestigious agency BBDO, bitterly decried what he called "the cotton curtain of discrimination" practiced by "the men in the gray flannel sheets," adding that it is time for the last corporate bastion of Jim Crow to fall.

Moore's denunciation of his former industry had long historical precedent. The advertising industry has been the subject of criticism for the lack of diversity in its hiring practices since the 1960s. In the real-life pages of Advertising Age, the industry bible, the disparities between ads targeting black and white audiences were attracting industry attention as far back as 1966; other industry observers weighed in earlier than that.

On that basis, you wonder if the Mad Men scriptwriters will entertain the introduction of an another minority in the storyline -- someone besides the Draper family's African-American maid or Don Draper's new Latina housekeeper. Someone within the workplace universe of Mad Men who can provide a professional perspective far different from that of the show's 99.9 percent-white characters. Far from just being a PC move, including black people in the Mad Men universe makes sense in the context of history.

Jason Chambers' 2008 book, Madison Avenue and the Color Line: African Americans in the Advertising Industry, recounts how Madison Avenue's attention began to pivot toward black consumers shortly after Ebony was launched in 1945. Its editorial focus on African-American upward mobility and the acquisition of creature comforts was different from that of black newspapers, whose editorial line tended to embrace a protest model.

Chambers examines the rise of what he calls the "Brown Hucksters," the group of African-American marketing and advertising specialists in the 1950s who helped deep-pocketed advertisers realize that black consumers spent money, too.

In his book, Chambers recounts the career of Georg Olden, an African-American trailblazer in advertising. After the United States entered World War II, Olden, the Alabama-born son of a Baptist preacher, left college and got a job as an artist for the Office of Strategic Services, a precursor to the Central Intelligence Agency. He later went to work at CBS and left there in 1960, at the age of 40, to pursue a new career in advertising. He signed on as the television art group director with BBDO.

In 1963, much in demand, Olden accepted an offer to move to the influential agency McCann Erickson to become vice president and senior art director. That same year, he became the first African-American designer of a postage stamp, a stylized depiction of a broken chain that marked the 100th anniversary of the Emancipation Proclamation. Olden went on to win seven Clios (the advertising industry's equivalent of the Oscars) for his work throughout the 1960s. (Icing on the cake: Olden himself designed the actual Clio statuette, inspired by a Brancusi sculpture.)

Throughout that decade, federal and state governments did what they could to make Olden less of an advertising anomaly.

"The New York City Commission on Human Rights and the federal Equal Employment Opportunity Commission both focused significant attention on the advertising industry during the 1960s, and their efforts reinforced and extended those introduced by civil rights activists," Chambers writes. "The Civil Rights Act of 1964, which outlawed racial discrimination in employment, broke down many of the visible and invisible barriers to blacks in the advertising industry. As a result, many agencies began to lure black professionals from other industries and to recruit at black colleges."

Olden wasn't the only one lured into the ad biz. Vincent Cullers (1924-2003), a black ad pioneer some have hailed as the Jackie Robinson of the U.S. advertising industry, began his career in 1953 at Ebony, where the former Marine worked as an art director. In 1956 he founded Vince Cullers Advertising Inc. with his wife, Marian. Cullers brought a deep sense of conviction and a pride in his heritage to his work, making positive self-image a centerpiece of his ad strategy.

Tom Burrell, still a commanding presence in ethnic marketing, has a résumé in advertising that's straight from central casting: His first job was in the mailroom at a Chicago ad agency. With initiative and a ravenous drive to succeed, Burrell moved on and became a copywriter at the famed Leo Burnett agency in 1964, working on several national accounts.

He moved to Paris and London and worked for other prestigious agencies, eventually forming his own agency in 1971. That's when he and partner Emmett McBain hit on the advertising concept that became the niche marketing that's commonplace today.

As black purchasing power increased and African Americans built on the gains of the civil rights movement, advertisers took notice. (The codification of Black History Month helped, too.) The result: Black-themed ad campaigns -- from the Great Kings of Africa posters to the reliable presence of ads from McDonalds, Sears, Greyhound and other companies in black magazines every February -- showed Madison Avenue making adjustments to accommodate the existence, and the tastes, of black consumers.

Given such history, including black ad men on Mad Men should be a no-brainer. The series begins its fourth season well after the Civil Rights Act of 1964; Freedom Summer, the epochal and dangerous campaign to register blacks in the Deep South to vote; the murders of Michael Schwerner, James Chaney and Andrew Goodman, three civil rights workers who died in that voter-registration effort; and numerous American race riots, one of which took place in New York City, where Mad Men is set.

There's no knowing in advance what shape the chronological arc of a series like Mad Men will take, certainly not for the viewers, maybe not even for the people who cast and write the show. But Mad Men has won deserved plaudits for its faithfulness to the ambience, artifacts and attitudes of the period (right down to the frequent cigarette smoking that was a fact of life in the days before it was prohibited in the workplace).

It's still very early in the new Mad Men season; a lot has happened in America since 1964, including the advertising industry's grasp of the power of black and minority dollars. We'll have to see how far the series' devotion to verisimilitude really goes. If its creators are the sticklers for historical detail we've been led to believe they are, there's good reason to expect to see some darker faces in the offices of Sterling Cooper Draper Pryce before long.