Accessibility links
A Man, A Plan And A Sharpie: 'The Great Typo Hunt' Incensed by a "no tresspassing" sign, Jeff Deck launched a cross-country trip to right grammatical wrongs. He enlisted a friend, Benjamin D. Herson, and together they erased errant quotation marks, rectified misspellings and cut unnecessary possessive apostrophes. The Great Typo Hunt is the story of their crusade.

A Man, A Plan And A Sharpie: 'The Great Typo Hunt'

A Man, A Plan And A Sharpie: 'The Great Typo Hunt' 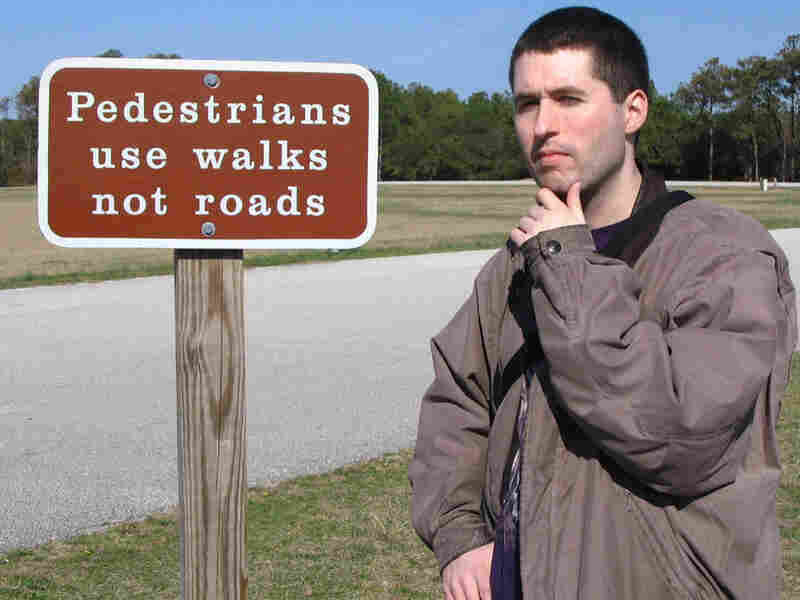 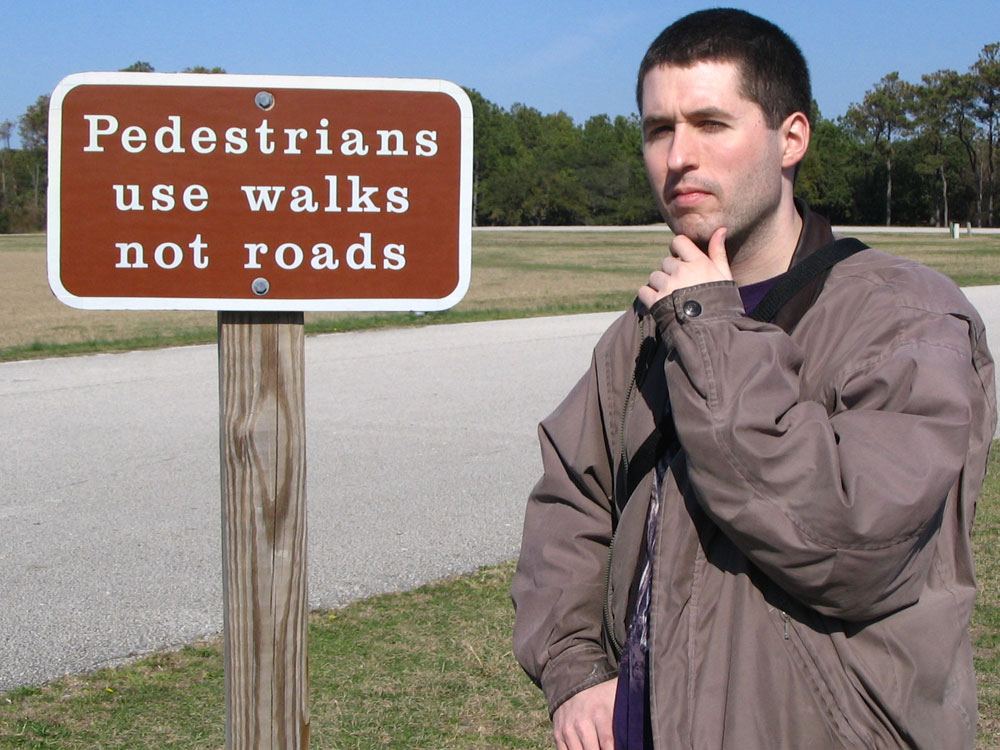 Incensed by a "no tresspassing" sign, Jeff Deck launched a cross-country trip to right grammatical wrongs.

He enlisted a friend, Benjamin D. Herson, and together they got to work erasing errant quotation marks, rectifying misspellings and cutting unnecessary possessive apostrophes.

The Great Typo Hunt is the story of their crusade.

In 2 1/2 months, Herson and Deck traveled the perimeter of the country, exploring towns and cities in search of typos. They found 437 typos and were able to correct more than half of them.

Some typos were uncorrectable -- out of the team's reach, or, as Deck tells NPR's Tony Cox, requiring tools and materials that weren't included in his "typo correction kit."

Deck carried a variety of Sharpies, of which "the black Sharpie was the most important." Deck also carried Wite-Out, dry erase markers, chalk, crayons and pens.

Sometimes Deck and Herson couldn't get permission from the typo-maker to make an adjustment to the signage. "They would turn us down, or they'd be apathetic about it," says Deck.

"Or they'd say 'Oh, we'll fix that one later,' and we'd really have to take their word on that."

Though people predicted Deck would find more typos in some regions of the country than others, in fact, "everyone really does make mistakes," he says. "We would find them wherever we went."

They did find, however, that local businesses tended to need more typo help. Corporate chain stores and signage usually didn't need as much editing.

Tell us: What's the typo that drives you crazy? Do you ever do anything about it? 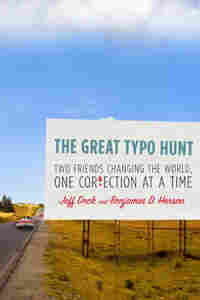 How to Change the World

The breezy summer afternoon beckoned to me, so I ambled outside. Maybe I'd seek out a hot dog in Davis Square. But fate intervened between me and that dog. Halfway to my destination, a large white and red object -- appalling to any sensitive eye -- froze me in my tracks!

The sign had been taunting passersby with that loathsome extra s for who knew how long. It hung on a wooden fence around a vacant lot next to a dentist's office. Sure, I'd noticed this sign before; dozens of walks to Davis Square had occasioned dozens of silent fist-shakings at this very spot. This time, though, the sign's offense struck deeper. How many spelling mistakes had I noticed over the years in shop windows, street signs, menus, billboards, and other public venues? Countless, I thought.

NYC Pizza and Pasta at it's best!

To/too, their/there/they're, and your/ you're confusion, comma and apostrophe abuse, transpositions and omissions, and other sins against intelligibility too heinous to dwell on. Each one on its own amounted to naught but a needle of irritation thrusting into my tender hide. But together they constituted a larger problem, a social ill that cried out for justice.

For a champion, even.

I stared at that no tresspassing sign, and I wondered: Could I be the one? What if I were to step forward and do something? The glare from the extra s seemed to mock me. Sure, others before me had recognized that there was a problem afoot in modern English. Plenty of people had made much hay of ridiculing spelling and grammatical errors on late-night shows and in humor books and on websites weighted with snark. But: Who among them had ever bothered with actual corrective action? So far as I knew, not a soul. A lambent vision descended upon me, like the living wheels revealed unto Ezekiel. In it, I saw myself armed with Wite-Out and black marker, waging a campaign of holy destruction on spelling and grammatical mistakes. The picture widened to describe not just my neighborhood, not just the Boston area or even the august span of the Bay State, but the entire nation.

There was my answer -- typo hunting was the good that I, Jeff Deck, was uniquely suited to visit upon society.

I would change the world, one typo correction at a time.

I turned back toward home, abandoning thoughts of hot dogs, and locked myself in my room, as typo-free a warren as one would expect. Typos might leap out from anywhere -- were, in fact, everywhere. How should I go about this quest? And would I be alone in my fight, against the whole world? Then it all clicked into place, and the vision stuck. I already had one ally, the Sleipnir to my Odin: Callie, my car. That road trip I'd wanted to take! This would be the motivational engine that I'd been missing. I think I collapsed onto the bed, the force of revelation knocking me unconscious, the proverbial lightbulb blinding me with its incandescent flare. Of course, I had also missed lunch.

When I came to, I decided I should attempt another outing, but this one with much more purpose. I immediately bought a sizable wall map of the United States and tacked it over my bed. With the sunset casting an eerie glow through my apartment, I stood enraptured by the sheer span of the nation. So many tiny names, so many roads. Quite a profusion of territory over which to spread the gospel of good grammar -- at least several thousand miles. I'd make a loop of the country's perimeter, since that seemed the best method for (a) seeing the most of this mammoth republic and (b) avoiding covering the same ground twice.

Are you sure about this? quoth the doubting raven in the dark aerie of my mind. Are you sure, are you sure?

"Shut your beak," I growled. True, my history did not especially glimmer with derring-do. First off, I had been terrified of driving at least until my early twenties, and my travels to date had never taken me west of Ohio; much of the country, most of it, lay beyond my ken. That in itself could argue for the adventure, but I wondered if I might be getting in over my head, setting too many new challenges at once. I'd been shy growing up, not prone to speaking out of turn or, well, speaking much at all. Once I started going around the country trying to correct typos, I'd inevitably have to talk to other people. The more I thought about it, the more I realized that this mission of mine would force me to continually confront strangers -- oftentimes over their own mistakes! How far did I honestly estimate that I had come from the meek days of yore?

I chose to put these worries aside. I had plenty of time to address them, while other, more tangible items needed immediate attention. Certainly I wouldn't be able to take a vacation from work for long enough to travel across the country, correcting typos as I went, so I'd have to leave my job. I'd need to set my sights on loftier concerns than income. Spider-Man always had money trouble, after all. If I took the leap for typo hunting in the pursuit of a better, more grammatically correct world, so be it.

I could still be sensible in my preparations, though. The trip itself would cost some serious bread. I had a savings account with some starter funds hoarded away, and I earned enough that I could save much more. If I cut costs by not going out as much, packing my lunch more often, and refraining from any extraneous purchases, I could probably save a significant chunk of change. I wouldn't want to travel the nation in the winter anyway, so I figured I could stay at my job through December and then take a couple of months to organize full-time all the little details of the trip. Not only would I have the chance to build up a respectable bank account, but I could also take more time to analyze the various aspects of this trip and decide if I really and truly could pull it all off.

I reached for a pencil on my desk to start jotting down some notes, and somehow I grabbed a Sharpie instead. It felt right in my hand, as though it had always belonged there. This, I thought, could be the tool to make a hero. 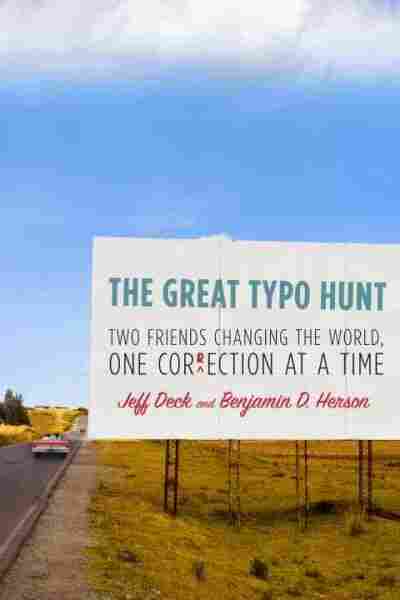 Two Friends Changing the World, One Correction at a Time