Accessibility links
'80s Nostalgia? M-M-Max Headroom Is Now On DVD The futuristic ABC series, starring Matt Frewer as an eerily human computer-generated television host, aired for only two seasons -- but became a pop culture phenomenon. Critic David Bianculli says he's happy the series is finally out on DVD but wishes he could see even more. 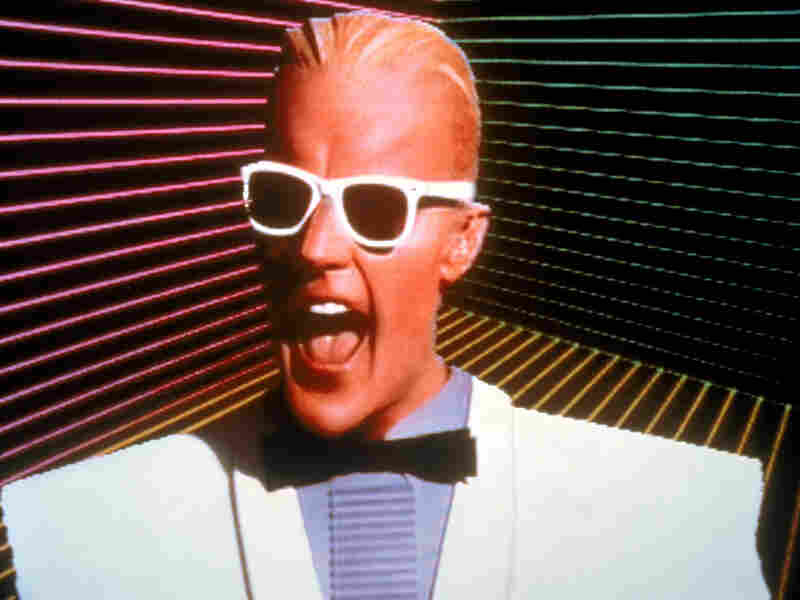 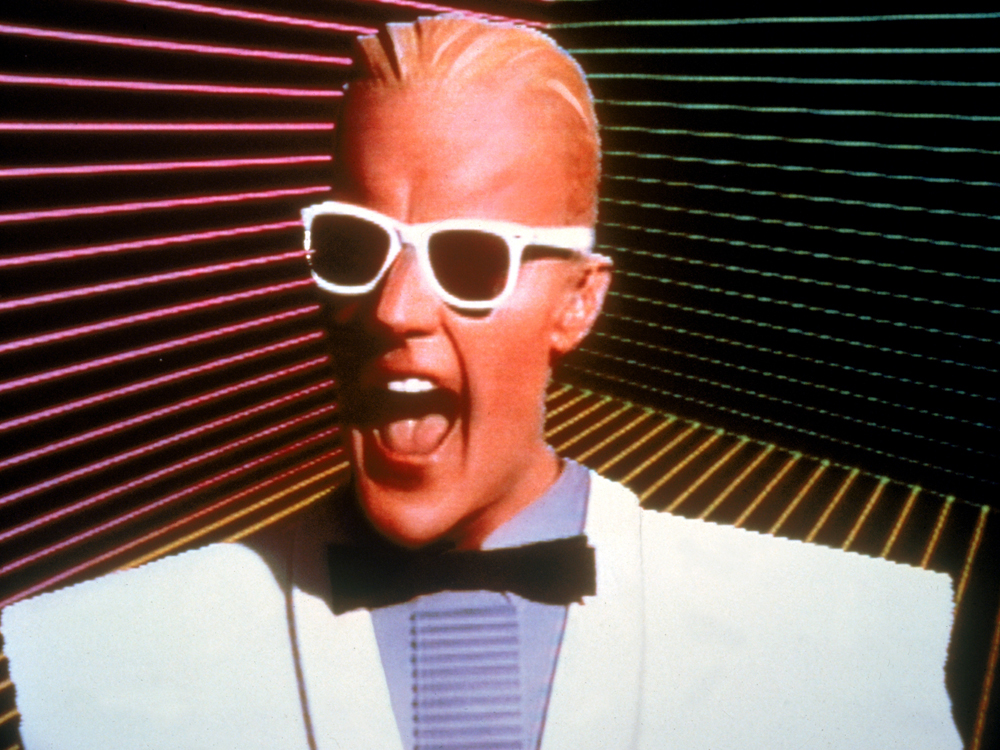 People who saw Max Headroom back in the '80s should have no problem remembering him instantly -- and not necessarily from the ABC TV series, which shone briefly and brightly in 1987 and 1988. Max, a supposedly computer-generated TV host played by Matt Frewer, was a bona fide media sensation for a while: He hosted a music-video show, starred in ads for New Coke (OK, so that didn't go so well), even appeared on the cover of Newsweek.

But to those too young to have experienced Max firsthand, how do you describe him, much less explain him? Well, let's try. Imagine a background of thin, brightly lit neon tubes, rotating and pulsating in various geometric patterns. Now, in front of that background, place a talking head. No hands, no body, just a head -- a head that looks manufactured, like a plastic dummy, but also is eerily human. That's Max Headroom -- with a stutter, both aural and visual, that's like a record needle stuck in a groove.

There were only 14 episodes of the TV series, and they're all on Max Headroom: The Complete Series. The show is set, as it proclaims at the start of each hour, "20 minutes into the future," but it's a very dark, cynical, Blade Runner type of future. The biggest media giant in the world is Network 23, a global operation -- and one of its biggest stars is Edison Carter, a hard-hitting reporter in the 60 Minutes tradition.

Played by Matt Frewer, who also plays Max, Edison is a one-man bureau, carrying his own camera and reporting live by satellite -- one of many visions of the future this series got right. One detail they got wrong, though, was the size of his camera: It's huge.

But so are some of the ideas this series floats, very sneakily, into a broadcast television program. Like Max Headroom the character, who is an irrepressible talking head, Max Headroom the series dares to bite the hand that feeds it. Plots have to do with Network 23, or other broadcast operations, trying to increase their audience share and maximize their advertising revenue through all sorts of nefarious means -- like subliminal ads called "blipverts," for example, that run too quickly to fast-forward through.

In this future, TV is everything. For example, there's a live report that Edison Carter presents from the hollowed-out wreck of a former movie theater.

"I want to show you something rare," says Edison, as he peers into the movie theater. "This was a dream palace. Years ago people came here ... to share dreams and adventures together. These were the days when people sat in groups and watched a single movie. Sometimes hundreds of people at one time. It must have been a weird experience. People watching the same screen and the same program." 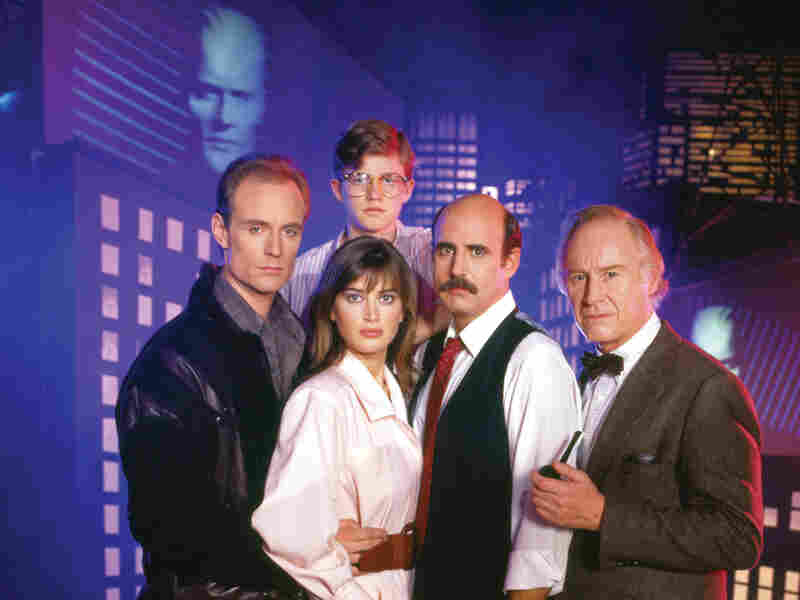 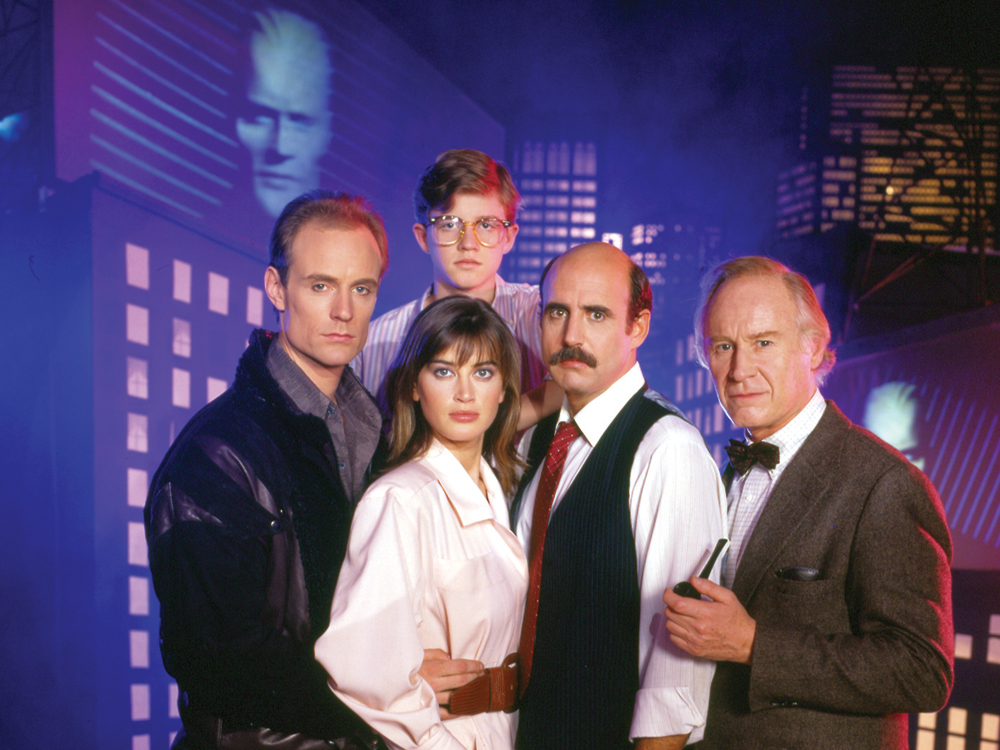 Back in the Network 23 control room, Murray the director -- played by Jeffrey Tambor, long before The Larry Sanders Show and Arrested Development -- glances at the screen. "I can't use more than 30 seconds [of this]," he says. "Nostalgia isn't what it used to be."

This is smart stuff -- and way ahead of its time, as a good sci-fi series should be. To me, the most brilliant aspect of all is the origin of the title character. Edison Carter, being chased by bad guys while covering a story, is trying to escape by motorcycle from an underground parking garage. Instead, he goes airborne, and nearly dies when he crashes into an exit barrier. The last thing he sees is the warning on the barrier: "Max Headroom [an abbreviation for Maximum Headroom] -- 2.3 meters."

When a computer genius back at Network 23 downloads Edison's brain into a computer file, the result is a slightly jumbled visual talking head, whose first words -- Edison's last thoughts -- become his name: Max Headroom. And, as one of the show's creators explains on a separate disc of special features, it was a brilliant case of countrywide free advertising: At the time, every parking garage in England featured the same "Max Headroom" sign.

But even with a whole disc reserved for extras -- including a segment in which Tambor and other co-stars, but not Frewer, reunite and reminisce -- too much is missing. The history of Max Headroom is described, but not shown, and that's a shame. When MTV burst onto cable in 1981, everyone wanted a piece of that action. NBC floated the concept of "MTV cops," and came up with Miami Vice in 1984.

A year later, Britain's upstart Channel 4 wanted a music video outlet of its own and went to producers George Stone, Annabel Jankel and others, who came up with the concept of a computer-generated wiseguy host who would make fun of the videos while presenting them. But Channel 4 wanted to explain the character, so a live-action movie introducing Edison Carter -- and the whole Max Headroom idea -- preceded the 13-week music-video series. Those showed up in 1985, and HBO, which had financed part of it, showed the original movie and a Max Headroom video series on HBO and Cinemax, respectively.

Then ABC picked up the ball, recast a few roles in the movie, and ordered 13 one-hour live-action episodes. That's what's in this DVD release.

But with a whole disc for extras, why aren't there any of those Max Headroom music-video shows? Why couldn't we have seen him, once again, interview some of the era's big pop stars, like an unforgettably amused Sting? And why not show a New Coke ad or two, for old time's sake? When TV of the future becomes our collective TV past, we have a duty to preserve it. What there is, on this Max Headroom set, is delightful -- but I want more.