Accessibility links
New Orleans Police Struggle In Post-Katrina Era In the weeks after Hurricane Katrina in 2005, lawlessness engulfed the city and police leadership was absent. Five years later, a continued perceived police impunity and persistently high murder rate have led to an increasing mistrust in the city's officers. 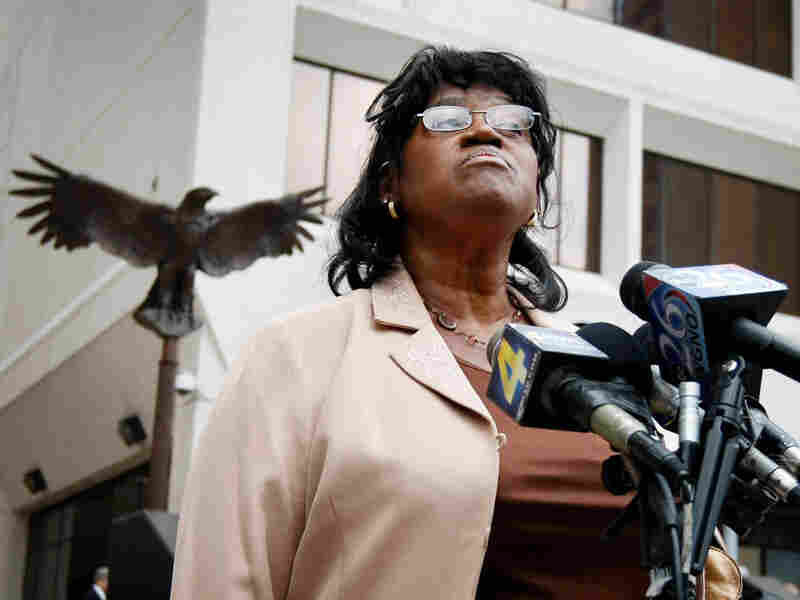 Sherrel Johnson, the mother of James Brissette who was killed on the Danziger Bridge in the aftermath of Hurricane Katrina, speaks to reporters on April 7 outside a federal court in New Orleans. Former New Orleans police officer Michael Hunter pleaded guilty that day in connection with a police cover-up of their shooting of unarmed civilians. Gerald Herbert/AP hide caption 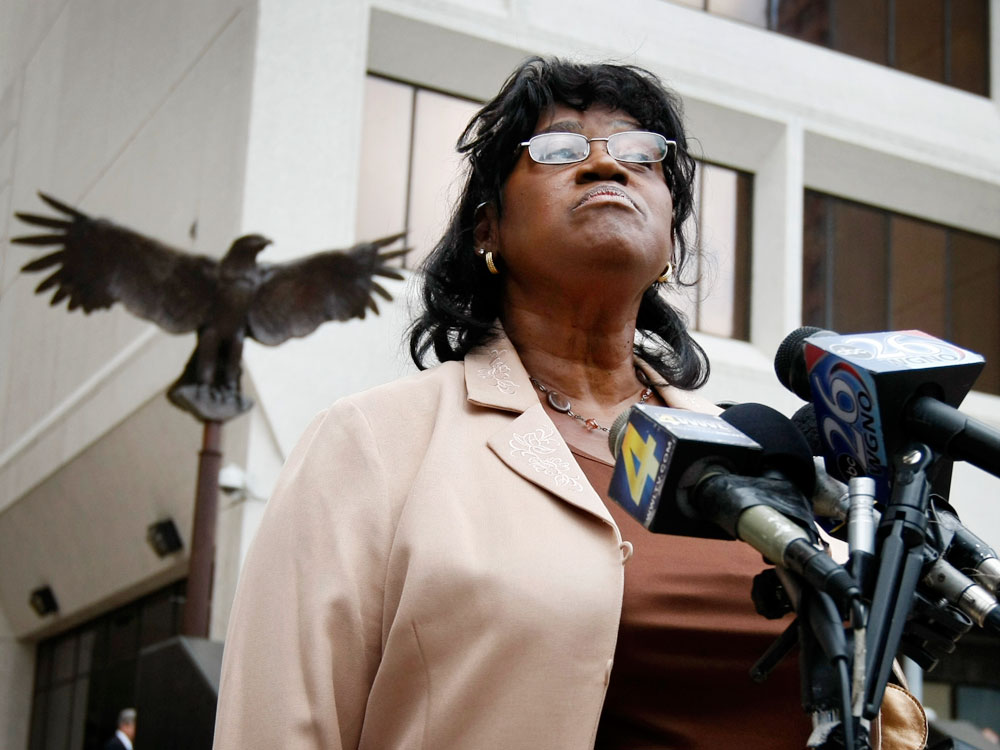 Sherrel Johnson, the mother of James Brissette who was killed on the Danziger Bridge in the aftermath of Hurricane Katrina, speaks to reporters on April 7 outside a federal court in New Orleans. Former New Orleans police officer Michael Hunter pleaded guilty that day in connection with a police cover-up of their shooting of unarmed civilians.

Five years ago this month, a powerful hurricane crashed into the Southern coast of the U.S., killing more than a thousand people. Katrina wiped out whole towns in Mississippi and left a major American city under water. New Orleans and the Gulf Coast have recovered in surprising ways since 2005, but many scars remain.

One New Orleans institution that was already in deep trouble when the storm hit was the police department. The NOPD has long battled a bad reputation. But after Katrina, the department's flaws unraveled: Officers deserted their posts, others got caught looting -- even the police chief quit.

In the weeks following the storm, things went from bad to awful -- and the city and its people continue to pay a heavy price.

With lawlessness engulfing the city and the cops' leadership absent, individual acts of police heroism were overshadowed by allegations of brutality.

In a tape shot by an NBC News crew, police officers were filmed in a chaotic scene on the Danziger Bridge. Unarmed residents were shot. Two died of their wounds. Seven New Orleans officers would be accused in the shootings and a subsequent cover-up. In another case, five more officers were implicated in the death of a man whose burned body was found in an abandoned car near a police station. Both cases were never fully prosecuted by local officials.

That perceived impunity and a persistent murder rate that remains more than eight times the national average have led to five years of increasing mistrust in New Orleans police.

You can see it on the streets as cops like Lt. Michael Brenckle work a minor burglary case.

"Did you all witness who stole this gentleman's speaker?" Brenckle asks more than a dozen neighbors sitting on their porches.

Even though the New Orleans murder rate has dropped since Katrina as more people move there, it's still more than eight times the national average of 5.4 per 100,000 people in 2008, according to the FBI.

*This reflects the number of murders through Aug. 8. **Accurate information that reflects the entire year is unavailable.

"No, no, we just came from Bible school," a kid replies.

Brenckle, a 20-year veteran of the force, grew up in this rough St. Roch neighborhood near the Mississippi River. He says people are afraid to be seen talking to the police, let alone coming forward as witnesses.

But times are changing.

Federal prosecutors have come to town and are looking into as many as eight unresolved police cases, including the Danziger Bridge shootings. Eighteen officers have been indicted.

And New Orleans' new Mayor Mitch Landrieu has asked the federal officials to stay on and help clean up the department.

"The level of danger on the streets of New Orleans -- the number of murders -- is unnatural. We have to find an answer to it, and we're going to work really hard to see if we can," he says.

Serpas was an assistant chief in New Orleans before leaving to head the Washington state police and later the force in Nashville. He says his nine years away from New Orleans have given him the experience he needs to clean up the NOPD once and for all.

"We are going to support the officers who are professional in every way," he says. "But I can't be more crystal clear than this: If you have a different agenda as a member of this department of being professional and service-oriented, you might as well leave now, because I will go to bed every night thinking of ways to get rid of you."

But many in New Orleans have heard this tough talk before.

In the mid-1990s, Len Davis was a cop who ran a cocaine ring out of the Lower Ninth Ward. When a resident filed a complaint with the police department, Davis called in a hit man -- and it was caught on an FBI wiretap:

"Brown skin with light brown eyes ... I've got the phone on and the radio ... after it's done go straight uptown and call me."

Local civil rights lawyer Mary Howell says corruption on the force was unbelievable -- you couldn't make this stuff up.

I heard all the shooting — and it only took 3 minutes. That ain't nothing but somebody ganging up on you. That's hate, torture, murder.

Patricia Grimes, talking about her son, who was shot by police on New Year's Day 2009

Back then, a reform mayor and police chief came in and pledged to work with federal officials. Changes were implemented; nearly 100 cops were fired. The murder rate dropped, community relations improved -- but sadly the reforms didn't stick.

By 2001, a different mayor and police chief took over and federal oversight began to wane. By 2005, when Katrina struck, the department had returned to its old ways.

In the back room of a community organization that protests police violence, relatives of family members who say they've been victims of the police were eager to tell NPR their stories.

Patricia Grimes talked about her son who was shot New Year's Day in 2009 by nine plainclothes cops. She says the entire confrontation lasted minutes. 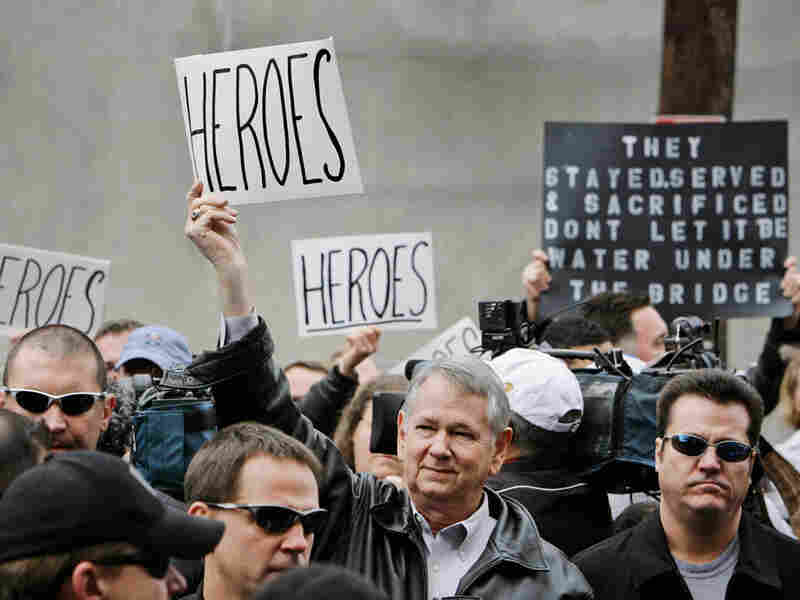 Police officers and fellow supporters hold signs as seven New Orleans police officers turn themselves in at the city jail in New Orleans on Jan. 2, 2007. They were charged in connection with deadly shootings at the Danziger Bridge during the aftermath of Hurricane Katrina. Alex Brandon/AP hide caption 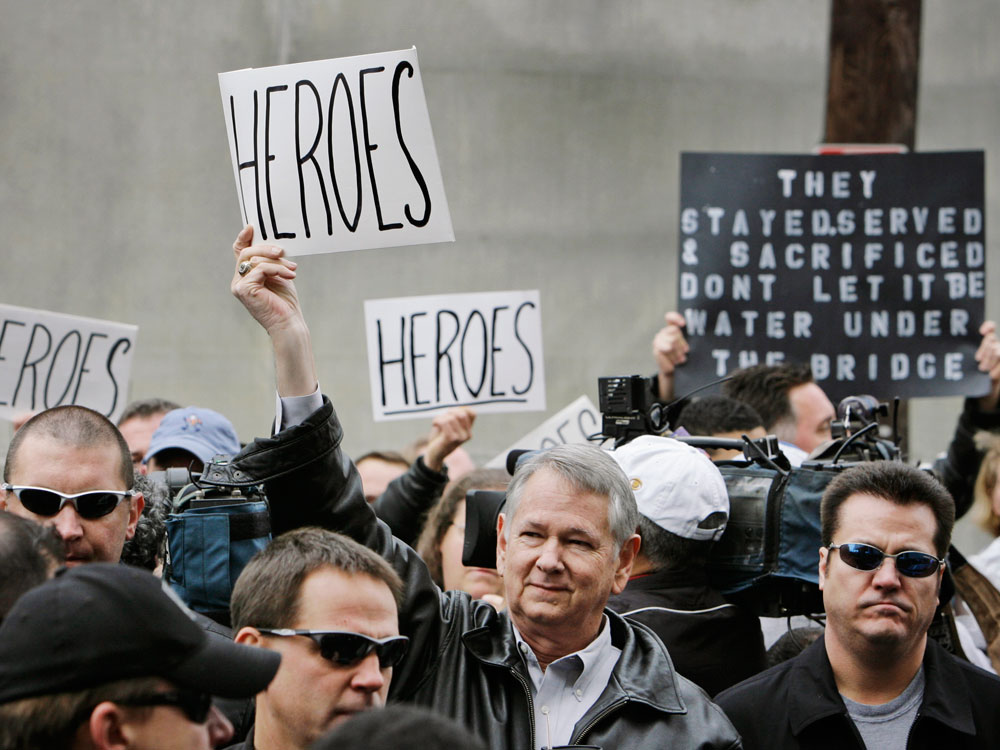 Police officers and fellow supporters hold signs as seven New Orleans police officers turn themselves in at the city jail in New Orleans on Jan. 2, 2007. They were charged in connection with deadly shootings at the Danziger Bridge during the aftermath of Hurricane Katrina.

"I heard all the shooting -- and it only took three minutes. That ain't nothing but somebody ganging up on you. That's hate, torture, murder," she says.

Another mother told about police beating her son to death after a traffic stop. One man recalled how cops shot and killed his mentally ill brother in their home.

Theresa Elloie says her son was beaten by police inside the family-owned bar. There were 12 witnesses. The lead lieutenant in her son's case has recently been indicted by federal prosecutors.

"If they would have handled my son case, not swept it underneath the rug and got those officers off the force, then these other people kids would be living," she says.

Elloie's family won a judgment against the NOPD, but can't disclose the terms of the award.

In addition to the significant human cost, the city is bearing a huge financial liability as the lawsuits mount.

Police Chief Serpas says he will get better training for his officers and new technology. He wants an early warning system to alert supervisors about potentially abusive cops -- a standard in most big city departments.

And he says this time he'll make sure that federal overseers stay longer, so reforms stick.

"This time, the difference is gonna be when we work collaboratively at the end of this process, there is going to be a document signed with the force of law so that if I won the lottery three years from now and I left, the next chief behind me couldn't go back and change the stuff that we put in place," Serpas says.

Serpas says all this will take time -- especially if the culture of the NOPD is to be changed. At a minimum, he says, give him five years -- right around Katrina's 10-year anniversary.