Accessibility links
Why A Brush With Death Triggers The Slow-Mo Effect Time seems to slow down when we fear for our lives. A neuroscientist believes he has figured out what's going on in our brains that makes us feel this way.

Why A Brush With Death Triggers The Slow-Mo Effect 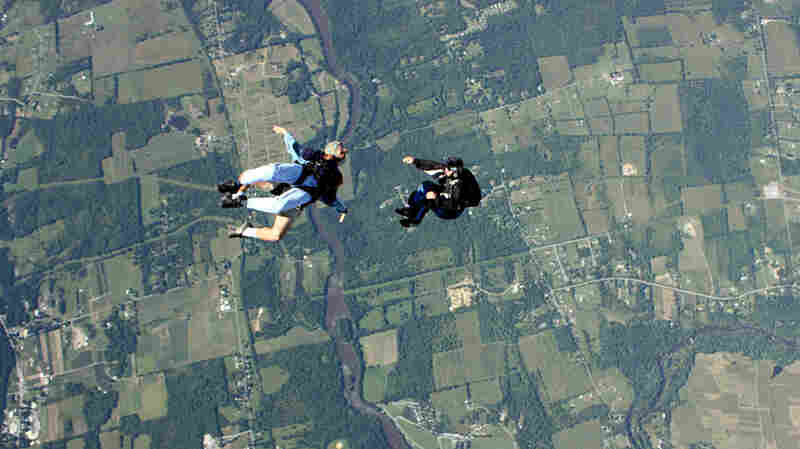 When David Eagleman was 8 years old, he went exploring. He found a house under construction -- prime territory for an adventurous kid -- and he climbed on the roof to check out the view. But what looked like the edge of the roof was just tar paper, and -- you can feel it coming -- when David stepped on it, he fell.

David was fine. But between whoosh and the thud, something odd happened. As David remembers it, he noticed every detail of his surroundings: the edge of the roof moving past him, the red bricks below moving toward him. He even did a little literary analysis: "I was thinking about Alice in Wonderland, how this must be what it was like for her, when she fell down the rabbit hole."

All of that happened in just 0.86 seconds. David knows that now because he has calculated how long it takes to fall 12 feet. David Eagleman is now Dr. Eagleman, a neuroscientist at Baylor College of Medicine, and one of his specialties is exploring how our brains perceive and understand time.

Several years ago, motivated in part by his childhood plunge, David started studying the way our sense of time distorts in crisis situations. He has gathered a huge number of stories from people who have survived falls, car crashes, bike accidents, etc. Everyone, he says, seems to say the same thing: "It felt like the world was moving in slow motion."

But what is really going on? David started to think that maybe, in a crisis, the brain goes into a sort of turbo mode, processing everything at higher-than-normal-speed. If the brain were to speed up, he thought, the world would appear to slow down. This would work just like a slow-motion movie; in a slow-mo shot of a hummingbird, for example, you can see each individual wing movement in what would otherwise be just a blur.

So David decided to craft an experiment to study this "slow-motion effect" in action. But to do that, he had to make people fear for their lives -- without actually putting them in danger. His first attempt involved a field trip to Six Flags AstroWorld, an amusement park in Houston, Texas. He used his students as his subjects. "We went on all of the scariest roller coasters, and we brought all of our equipment and our stopwatches, and had a great time," David says. "But it turns out nothing there was scary enough to induce this fear for your life that appears to be required for the slow-motion effect."

But, after a little searching, David discovered something called SCAD diving. (SCAD stands for Suspended Catch Air Device.) It's like bungee jumping without the bungee. Imagine being dangled by a cable about 150 feet off the ground, facing up to the sky. Then, with a little metallic click, the cable is released and you plummet backward through the air, landing in a net (hopefully) about 3 seconds later.

SCAD diving was just what David needed -- it was definitely terrifying. But he also needed a way to judge whether his subjects' brains really did go into turbo mode. So, he outfitted everybody with a small electronic device, called a perceptual chronometer, which is basically a clunky wristwatch. It flashes numbers just a little too fast to see. Under normal conditions -- standing around on the ground, say -- the numbers are just a blur. But David figured, if his subjects' brains were in turbo mode, they would be able to read the numbers.

The falling experience was, just as David had hoped, enough to freak out all of his subjects. "We asked everyone how scary it was, on a scale from 1 to 10," he reports, "and everyone said 10." And all of the subjects reported a slow-motion effect while falling: they consistently over-estimated the time it took to fall. The numbers on the perceptual chronometer? They remained an unreadable blur.

"Turns out, when you're falling you don't actually see in slow motion. It's not equivalent to the way a slow-motion camera would work," David says. "It's something more interesting than that."

According to David, it's all about memory, not turbo perception. "Normally, our memories are like sieves," he says. "We're not writing down most of what's passing through our system." Think about walking down a crowded street: You see a lot of faces, street signs, all kinds of stimuli. Most of this, though, never becomes a part of your memory. But if a car suddenly swerves and heads straight for you, your memory shifts gears. Now it's writing down everything -- every cloud, every piece of dirt, every little fleeting thought, anything that might be useful.

Because of this, David believes, you accumulate a tremendous amount of memory in an unusually short amount of time. The slow-motion effect may be your brain's way of making sense of all this extra information. "When you read that back out," David says, "the experience feels like it must have taken a very long time." But really, in a crisis situation, you're getting a peek into all the pictures and smells and thoughts that usually just pass through your brain and float away, forgotten forever.