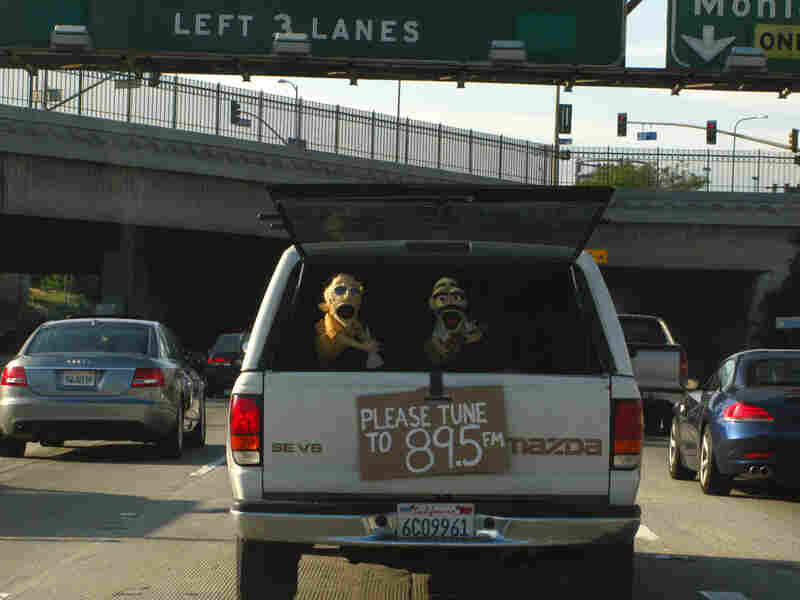 Unlike most L.A. motorists, Kyack and his collaborators actively seek out the most congested sections of the highway. The tailgate sign tells other drivers how to tune in to the show's dialogue. Amy Walters/NPR hide caption 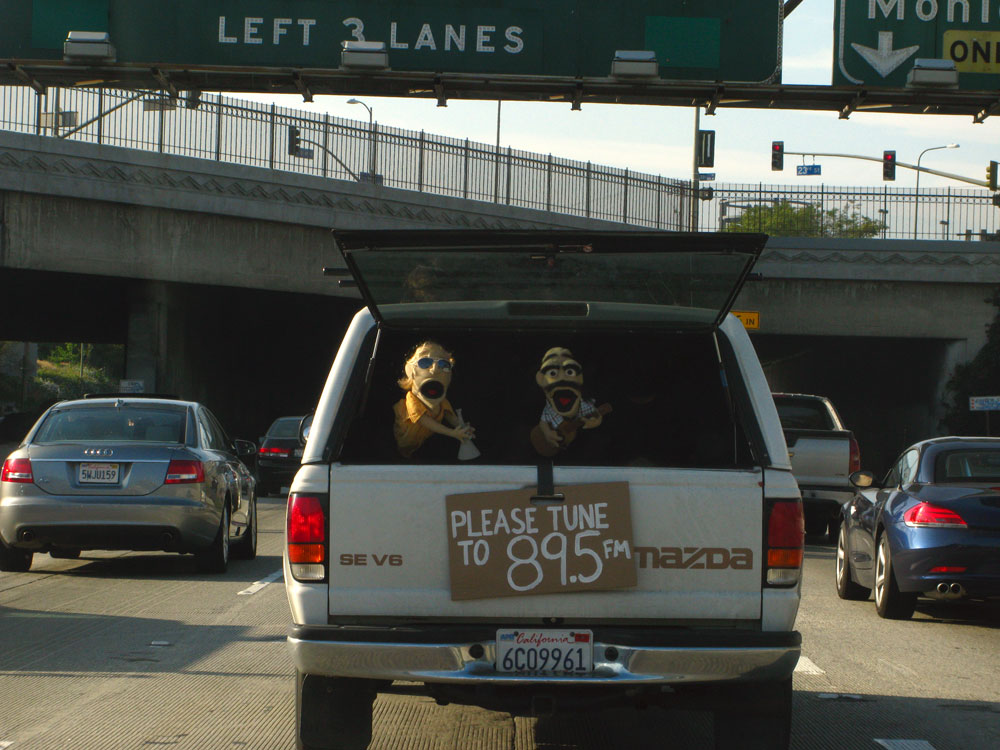 Unlike most L.A. motorists, Kyack and his collaborators actively seek out the most congested sections of the highway. The tailgate sign tells other drivers how to tune in to the show's dialogue.

In a parking lot near the Golden State Freeway, Los Angeles artist Joel Kyack is stripping right down to his underwear. He squeezes into a black bodysuit that makes the skinny 37-year-old look even skinnier, and pops open the back hatch of a dusty white truck. He's setting the stage -- quite literally -- for another installment of his first large-scale public art project: a rush-hour puppet show.

"It's tight," Kyack ruefully admits, waving to the innards of his mobile theater, set up for two puppeteers. "There's an FM stereo transmitter right there, a CD player. ... The puppets are stacked on either side, and that's in the order we do the shows."

The show, called Superclogger after L.A.'s endlessly clogged freeways, was conceived with Kyack's friend Peter Fuller. Fueled by a determinedly low-tech aesthetic, it stars a cast that suggests a group of funky, grimy, homemade Muppets, acting out short vignettes on themes that might speak to people stuck in traffic. Coping with uncertain conditions, for instance, or the state of being controlled.

"I like chaos," Kyack observes. "I like things that are moving in and out of control, like negotiations of agency and resignation. And for me, the traffic jam is that."

Kyack studied at the Rhode Island School of Design as an undergraduate, then earned an M.F.A. from the University of Southern California in 2008. He's exhibited his work in some well-reviewed shows, but this is his first time working in the medium of puppet theater. (Or in traffic.) The show plays out in the bed of that pickup truck, with the sound broadcast over a low-power FM signal that car radios can pick up if they're within 200 feet.

"We'll go down on Exposition and get on, like, 37," Kyack suggests as the others nod. "It looked like it was really jammed."

When informed that a major sports event is hopelessly tying up traffic, Kyack can barely contain his delight. "We're gonna be able to do like three performances between here and the 101!" he crows. 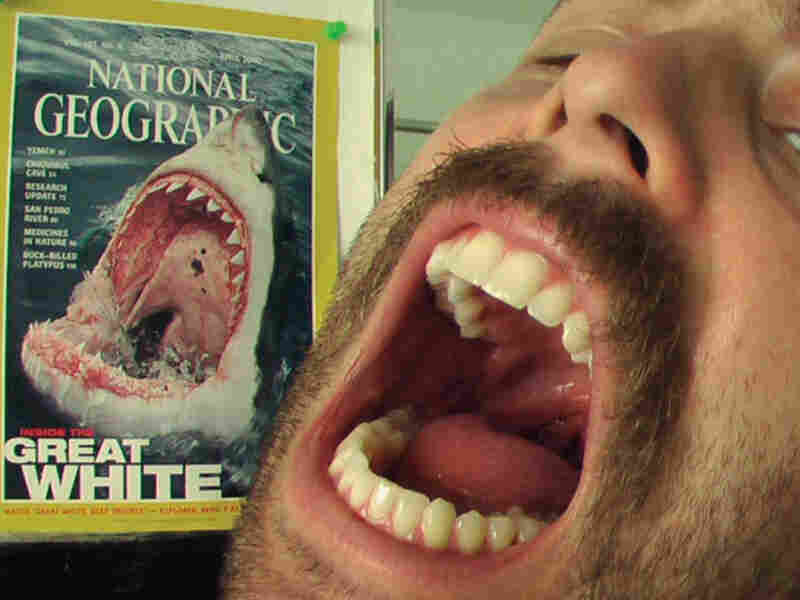 Artist Joel Kyack — here, in a self-portrait as Great White — has made works in a variety of media, but Superclogger is his first attempt at a public art project involving puppets. Courtesy of Joel Kyack hide caption 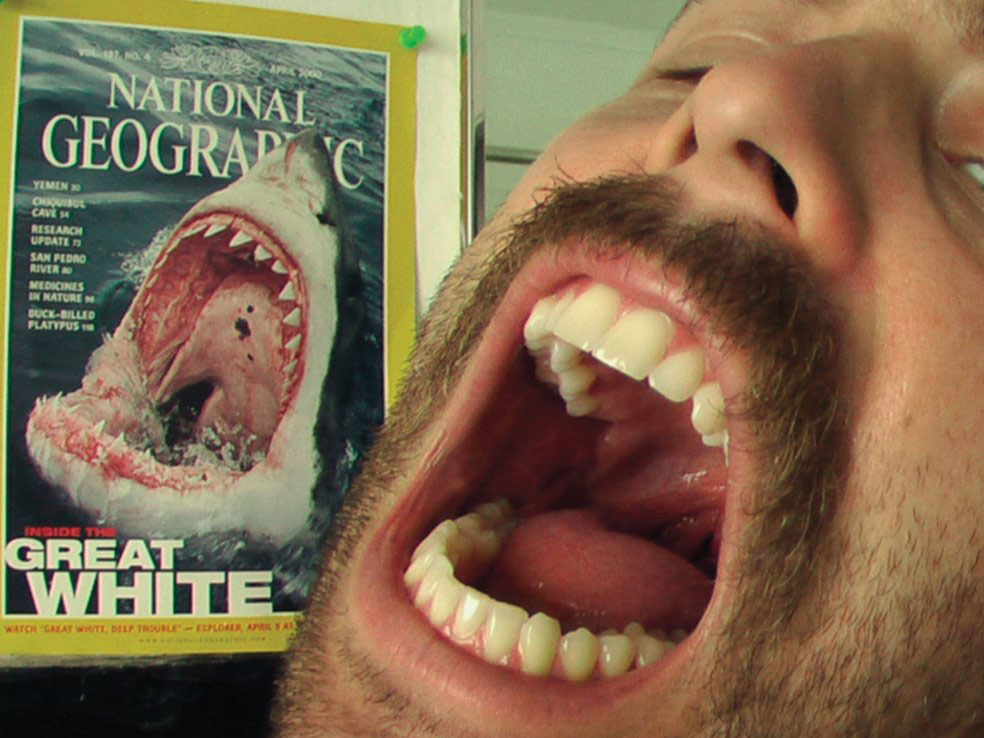 Artist Joel Kyack — here, in a self-portrait as Great White — has made works in a variety of media, but Superclogger is his first attempt at a public art project involving puppets.

Unfortunately, that turns out not to be the case. Shortly after NPR producer Amy Walters and I follow Kyack onto the freeway in my rental car, the artist gets pulled over by the California Highway Patrol. He doesn't get in trouble. But then again, the cops don't quite buy his academic theories about offering a space of engagement for drivers to reflect on the chaotic structures of their daily routine.

Curator Cesar Garcia -- of the nonprofit group LAXART, which sponsored the show -- said he made sure in advance everything was legal.

"There's nothing that leaves the vehicle, nothing that exits the vehicle," Garcia says firmly. "The truck has been modified; the seats are bolted on the bed of the truck. They're wearing seat belts; it's insured."

And Garcia says Kyack has basically memorized the section of the FCC handbook that proves what he's doing is allowable. The artist says he's mainly interested in raising questions for Angelenos who spend so much time on the 5, the 10, the 101 and the 405.

"How you navigate, how you make the world that you want around you, and how you compromise with what the world's giving you," Kyack explains. "And I think that formally, the traffic jam is sort of the perfect metaphor to explore that."

Kyack sees elegance in the controlled choreography of vehicles of different shapes and colors moving toward and away from each other. And he says he enjoys reaching the people in them -- people who don't necessarily visit art galleries -- and proving that public art can be more than just a big bronze sculpture.

Superclogger ends in late September, with a big event sponsored by the Hammer Museum.