Accessibility links
Calif. Leads In Clean Energy, But Challenges Loom Gov. Arnold Schwarzenegger hopes his state will generate a third of its electricity from renewable power by 2020. It's an ambitious goal that will take an unprecedented effort. But economic and bureaucratic challenges could hamper the efforts of clean energy developers. 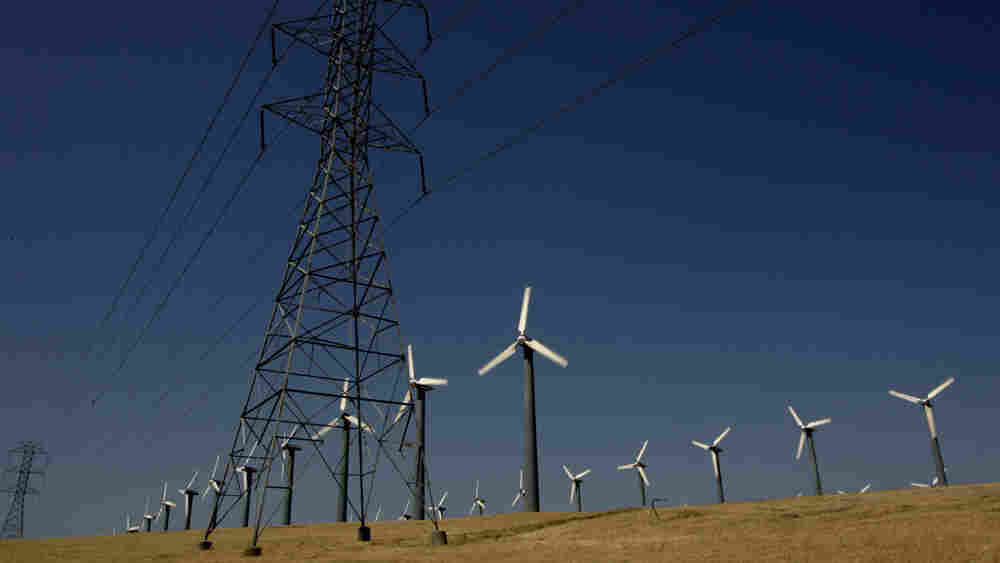 Out Of Thin Air: California has set ambitious targets for renewable energy generation for the state. Wind power, including electricity generated by these turbines at the Altamont Pass wind farm east of San Francisco, will play a key role in meeting the state's goals. Justin Sullivan/Getty Images hide caption

Out Of Thin Air: California has set ambitious targets for renewable energy generation for the state. Wind power, including electricity generated by these turbines at the Altamont Pass wind farm east of San Francisco, will play a key role in meeting the state's goals.

First of five stories on renewable energy in California

California has always been ahead of the curve when it comes to renewable power, and the state's clean energy business is flourishing. One of the first large-scale wind farms in the country was built just outside the Bay Area at the Altamont Pass, and this year, California regulators are reviewing twice as many renewable power contracts as last year.

Part 3: A (Load) Balancing Act: The Challenge Of Clean Power

More of those projects are coming online, including a 16-acre solar farm outside of Sacramento a few weeks ago.

The reason for this boom has to do with ambitious clean energy goals the state announced in 2002. But reaching those goals is proving to be a challenge.

California's long-term goal is for utilities is get one-third of their electricity from renewable sources by 2020. In the short term, Gov. Arnold Schwarzenegger wants that number to be 20 percent by the end of this year.

"California is a world leader in protecting the environment and in fighting global warming, and we have done an extraordinary job -- not only for California but also inspiring other states and other nations to do exactly the same," Schwarzenegger said when announcing the 33 percent goal two years ago.

California isn't expected to meet its short-term goal, though it is estimated that the state will clock in close to their target at around 18 to 19 percent. Thanks to a three-year grace period, the state's utilities won’t be penalized for being a year or two behind.

But many believe the governor's goal for 2020 will be even harder to hit. According to the California Public Utilities Commission, it will require an unprecedented effort -- at least a doubling of transmission lines and a doubling of renewable energy, thanks to a growing energy appetite.

"I think a lot of people have doubts about whether or not the utilities can do it," says Tom Bottorff, a senior vice president at PG&E Corporation. "I'm in the camp that believes that it's feasible and doable, and we're working very hard to make sure that happens."

The state of California wants 33 percent of its electricity to come from renewable sources by 2020. This chart shows how renewable energy sources are expected to be used to help the state meet its goal.

Bottorff says the company has signed more than 100 contracts with solar, wind and geothermal developers, "but we're concerned whether all those projects that we've contracted with will actually come online," he says. "It's been a tough economy."

In most cases, it's up to developers to find the financing to build solar and wind farms. But financing has been hard to come by since the economic downturn, though developers have had some help recently from the federal stimulus funding.

"That's been critical, and we're very thankful that those opportunities are available," Bottorff says. 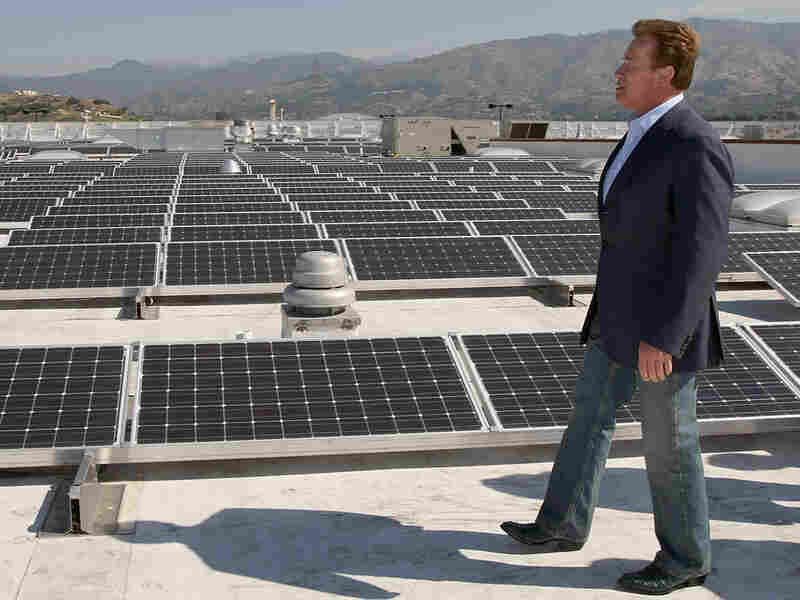 Gov. Arnold Schwarzenegger wants 33 percent of California's electricity to come from renewable sources by 2020. That includes solar installations like this one on the roof of a Sam's Club store in Glendora, Calif. David Mcnew/Getty Images hide caption 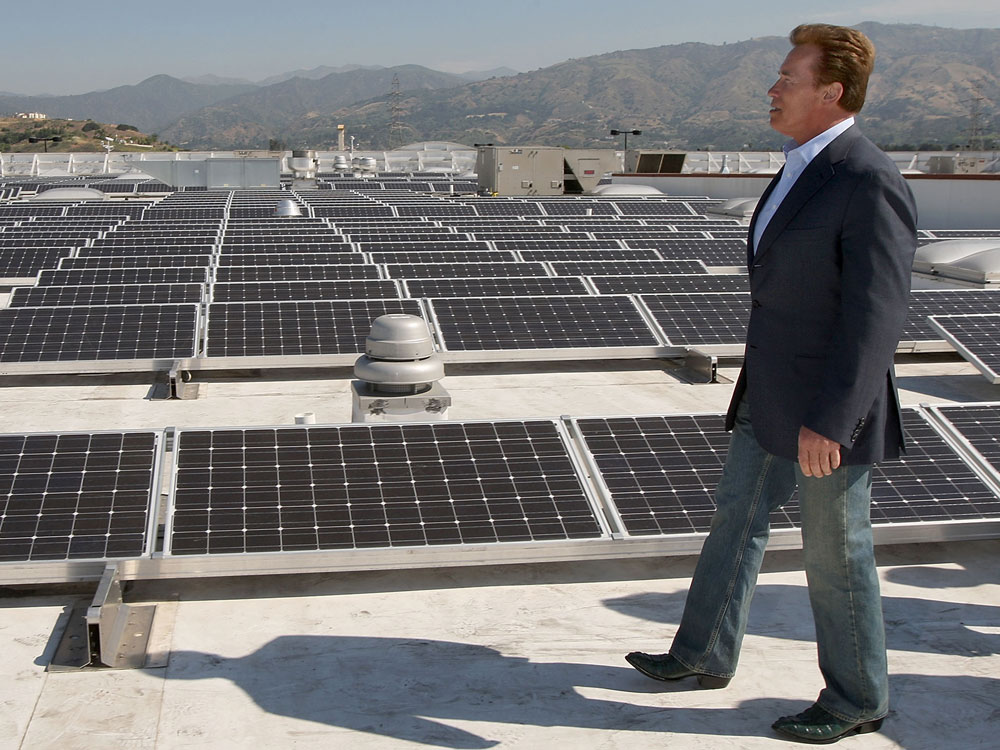 Gov. Arnold Schwarzenegger wants 33 percent of California's electricity to come from renewable sources by 2020. That includes solar installations like this one on the roof of a Sam's Club store in Glendora, Calif.

The other challenge, Bottorff says, is California's complex permitting process. Since many solar and wind projects cover hundreds of acres in environmentally sensitive areas, developers must navigate local, state and federal agencies for permission to build.

"I would probably describe it as painful, tortuous and highly complicated," says Michael Picker, the governor's senior adviser for renewable energy facilities. "The reality is that each one of the projects that we permit this year will immediately become the largest in the world."

Picker is talking about some of the huge solar farms that are caught up in the state's permitting process. Many have run into major delays. The state is relying on solar power for the 33 percent goal, and these projects will have to succeed if the state is going to hit the goal by 2020.