Accessibility links
Corruption Charges Tainted Rostenkowski's Legacy Former Congressman Dan Rostenkowski -- the Chicago Democrat who became the leading architect of congressional tax policy during the Reagan era -- died Wednesday at the age of 82. He served 18 terms in the House. Rostenkowski's political career ended after he pleaded guilty to corruption charges.

Former Congressman Dan Rostenkowski — the Chicago Democrat who became the leading architect of congressional tax policy during the Reagan era — died Wednesday at the age of 82. He served 18 terms in the House. Rostenkowski's political career ended after he pleaded guilty to corruption charges.

Illinois Democrat Dan Rostenkowski was one of the most powerful figures in the U.S. House of Representatives for many years. His long public career ended when he pleaded guilty to fraud charges in the 1990s - charges that sent him to prison. Dan Rostenkowski died yesterday. And Chicago Public Radios Tony Arnold has this look back at his life.

TONY ARNOLD: Dan Rostenkowski had a certain swagger, a swagger that made for a blunt, straightforward, tough-talking politician. To give you an idea, here he is in a 1998 interview with CBS Radio station WBBM in Chicago, in which he predicted what reporters would say in his obituary.

Representative DAN ROSTENKOWSKI (Democrat, Illinois): You know, with all the legislation that I passed, with all the history that Ive written with respect to the economics of the country, theyre always going to say theres a felon named Danny Rostenkowski.

Thats going to be the obituary; thats what you fellas will write. You know, itll be, yeah, but he was a felon.

ARNOLD: Before he was that felon, Rostenkowski was a member of the Illinois legislature elected in his early 20s. Richard Cohen published a book on Rostenkowski. Cohen says Rostenkowski got his start in politics the same way many Chicago politicians do.

Mr. RICHARD COHEN (Author): He got there basically because he was his fathers son.

ARNOLD: Cohen says Joe Rostenkowski was a member of the Chicago City Council and helped his son win election. From there Dan befriended the powerful mayor of Chicago, Richard J. Daley, who helped Rostenkowski win a seat in Congress. Rostenkowski was known for adopting the old-school way of Chicago politics. One example: the 1968 Democratic Convention in Chicago.

As police officers battled anti-war protesteors in the streets, Rostenkowski is said to have taken control of the gavel so that he would be the one calling the convention to order.

Looking back at the riots in a 2008 interview, Rostenkowski defended the police action, and described what he called the invasion of Lincoln Park.

Rep. ROSTENKOWSKI: Young, rambunctious, bearded revolutionaries who Im sure were sincere about fighting the war, but their tactics were illegal.

ARNOLD: In 1981, Rostenkowski became the chairman of the powerful House Ways and Means Committee and ruled it for more than a decade, passing an overhaul to the nations tax system.

In the '90s, he was charged with having ghost employees on his congressional payroll, and with converting postage stamps into cash. He eventually pleaded guilty although, addressing reporters on the steps of the federal courthouse in Washington, Rostenkowski said hes no different than any other member of Congress.

Rep. ROSTENKOWSKI: I personally have come to accept the fact that sometimes, one person gets singled out to be held up by law enforcement as an example. I simply have to accept that, and move onward with my life.

ARNOLD: Rostenkowski lost re-election in 1994 to a Republican, and he was incarcerated for 15 months shortly thereafter.

Richard Cohen, who wrote the book on Rostenkowski, spent time interviewing the former congressman when he was incarcerated in Oxford, Wisconsin. Rostenkowski called it his Oxford education. Cohen says even while behind bars, Rostenkowski still carried himself as if he were - well, the chairman.

Mr. COHEN: Even then, while he was in prison, he it was a bit of a swagger and it was a self-confidence. And thats just who he was.

ARNOLD: In 2000, President Bill Clinton pardoned Dan Rostenkowski, who died yesterday at the age of 82 at his home in Wisconsin.

Chicago Democrat Dan Rostenkowski, who for 13 years wrote tax laws and loopholes as chairman of the House Ways and Means Committee, was the gruff, deal-making, steak-devouring embodiment of Congress in the second half of the 20th century.

Rostenkowski, who served 18 terms in Congress before losing in 1994, died Wednesday. He was 82.

"I've never had anybody call me and suggest that they want to be taxed," he said in a C-SPAN interview in 1993 when he helped write a deficit-reduction bill for President Clinton. "And I just hope the Senate and the House of Representatives will respond. The people want us to govern."

And govern he did. As chairman of the Ways and Means Committee, Rostenkowski helped overhaul the entire tax code, pass a fix for Social Security financing and reduce the deficit.

Former Rep. Tom Downey (D-NY) served on Ways and Means for 14 years, studying the Rostenkowski approach. "You try to work out deals with Republicans, try to get a bipartisan package put together if you could, and then bring that to the floor. That was good legislation, for him," Downey said.

As to just how that good legislating was facilitated, Downey says Rostenkowski favored Morton's The Steakhouse. "The members would all go there and some lobbyist or group of lobbyists would pick up dinner," he said. "There would be steaks and lot of carousing."

But the country was changing around Rostenkowski. In 1989, senior citizens rebelled against a Medicare revision that he had championed.

CBS News covered a constituent meeting in Chicago after which Rostenkowski raced across the street to his waiting car and driver, pursued by angry senior citizens. "He's not a congressman. He's a bum," they shouted. "He's supposed to represent the people, not himself." 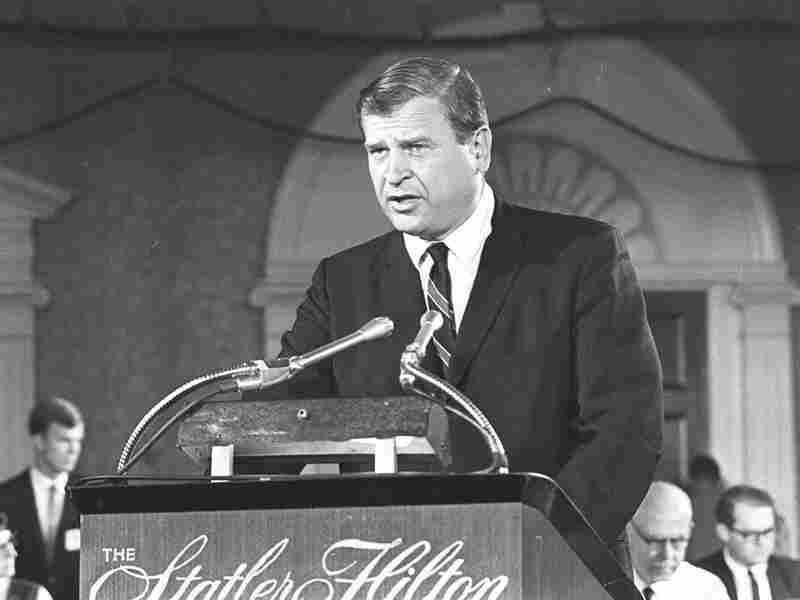 Rostenkowski testifies Aug. 19, 1968, before the Democratic Platform Committee during hearings in Washington, D.C. He served in Congress for 18 terms before his defeat in 1994. AP hide caption 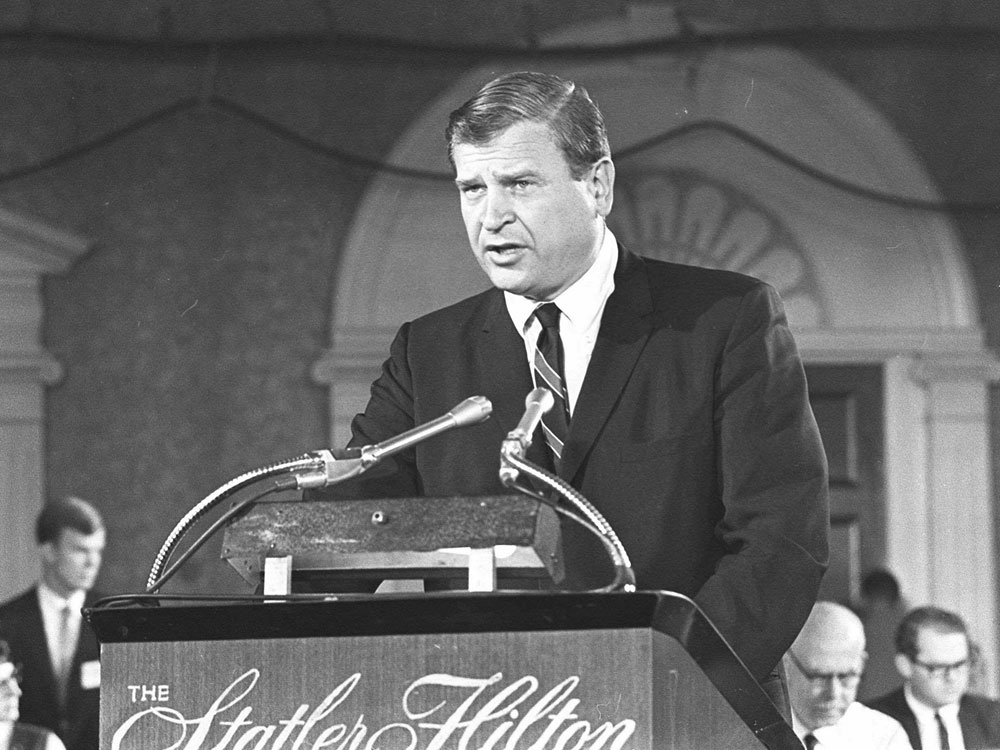 Rostenkowski testifies Aug. 19, 1968, before the Democratic Platform Committee during hearings in Washington, D.C. He served in Congress for 18 terms before his defeat in 1994.

In 1992, Rostenkowski got a subpoena that marked the start of an investigation by the Justice Department into allegations that he misused public funds. He lost his seat in 1994 and was convicted two years later.

"I personally have come to accept the fact that sometimes one person gets singled out, to be held up by law enforcement as an example," he said of the verdict.

Rostenkowski served 17 months in prison, but he didn't let his family visit him.

Over the years, he grew more reflective.

"You walk into a room that you used to take command of, and then you get into this frame of mind where you're thinking everybody's looking at you, and you're a crook," he told C-SPAN in a 2005 interview. "And that's sad."

But Rostenkowski also talked about a reunion with his Ways and Means staff.

"We had a great time, great dinner," he recalled. "They were all still proud of the service that we rendered, and, of course, me in particular."