Accessibility links
Flow Of Oil From Iraq To Iran Raises Concerns In northern Iraq's autonomous region of Kurdistan, the long lines of tanker trucks carrying oil into Iran are under scrutiny. Some observers say it's smuggling that violates international sanctions and Iraq's rules on the sale of oil. Others say it's perfectly legal. 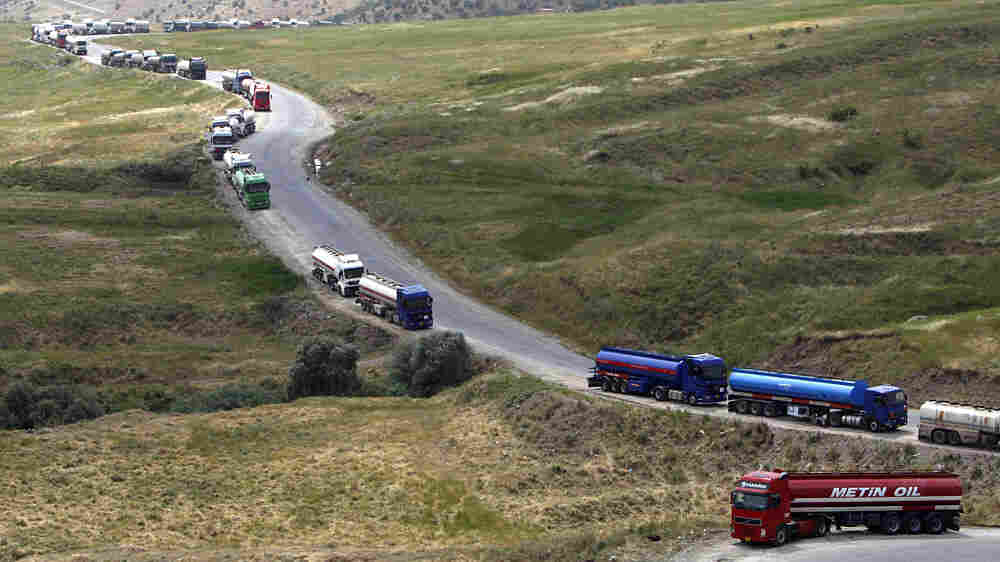 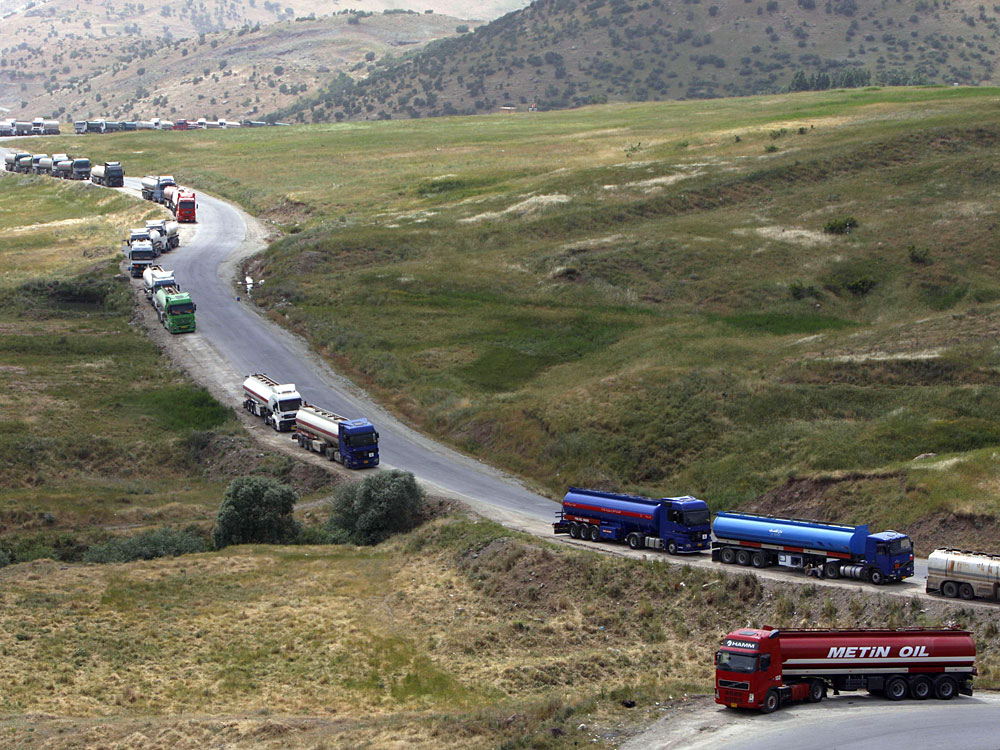 Trucks carrying oil snake their way through Haj Omran, Iraq, a mountainous Kurdish resort town on the border with Iran.

In northern Iraq's autonomous region of Kurdistan, the long lines of tanker trucks carrying oil into Iran are under scrutiny.

Some observers say it represents smuggling that violates international sanctions and Iraq's own rules on the sale of oil. Others say it's perfectly legal.

On a recent day on the Iraqi side of the border with Iran, hundreds of trucks are lined up, waiting to cross into Iran.

Badr Ramsi's tanker has dark brown streaks down the side, like oil has been spilling over the sides as he rumbles up the mountain roads. Ramsi says the truck is carrying crude oil and that he will drive the oil across Iran.

Other drivers say they're carrying refined products such as gas and fuel oil. Most say they'll deliver their product to Iran's main ports. From there, the drivers don't know whether the oil will be exported or used domestically.

Across the entire country, there is a major lack of transparency.

Ramsi says he is working for a private company. And as far as he knows, it's all on the up and up.

At 3 p.m., the border opens up, and the trucks rumble along on their way.

There are two reasons this scene has gotten so much attention lately.

The first is that shipping gasoline and other refined oil products to Iran may violate new sanctions by the U.S. and the European Union.

The second is that the bulk of money from sales of all oil products from Kurdistan is supposed go to the central government of Iraq, of which Kurdistan is still a part.

But critics like Abdullah Malla Nouri say high-ranking Kurdish officials have set up private companies to sell the region's oil and are keeping the money for themselves.

"I don't have any living evidence of who runs the company, but, as I know, and all people know ... that all these companies cannot operate, cannot do business unless they are supported or backed by the officials who belong to the local parties who are running the government," he says.

Malla Nouri is part of a new opposition group that's critical of the ruling parties in Kurdistan. A newspaper run by the opposition group was recently sued for $1 billion for suggesting that officials are profiting from oil sales.

Kawa Mahmoud, a spokesman for the Kurdish regional government, says the tanker trucks are full of surplus oil that the government sells to private companies who have every right to turn around and resell to the highest bidder. He says there could be a few bad actors in the oil trade, but they are not the majority.

Part Of A Larger Dilemma

The conflict is just one small chapter in the larger story of how Kurdistan and the rest of Iraq share oil revenues.

The central government of Iraq claims the sole right to develop the country's oil sector. But the Kurdish region over the past several years has been signing deals with international companies to pump oil and refining that oil on its own.

Until the two sides can sit down and look at all the oil projects in the region, it will be a long time before they can reach an agreement, says Ben Lando, the founder of the online news site Iraqi Oil Report.

"Across the entire country, there is a major lack of transparency," he says. "And without knowing exactly how much oil is produced, exactly how much is going to which refineries, exactly what fuel these refineries are producing, and exactly what happens to that fuel when it leaves the refinery, you're not able to find out who is smuggling and what they're smuggling, and who is selling and what they are selling."