Accessibility links
Unearthed Ship In NYC Offers Clues Of Colonial Life Conservators in Maryland are poring over a ship, thought to have been a cargo vessel from the 1700s, that was uncovered at the site of the World Trade Center. From the wooden ship's size to the tiny good luck charms found aboard, it's offering a new perspective on history.

They call it the mystery ship: a wooden vessel that may have sailed the Hudson River and the East Coast, transporting goods between the flourishing Colonies. Its remains were found last month in the ruins of the World Trade Center in New York City. They've since been moved to a science lab in Maryland, where each day brings new discoveries.

The first thing that hits you when you lean toward the enormous tanks filled with water, where scientists use small brushes to clean the timbers, is the smell -- a bit like rotten eggs. Or, as Nichole Doub, head conservator at the Maryland Archaeological Conservation Laboratory, says, "that deep-woods smell after a really heavy rain." But after weeks of being "up to our knees and elbows" in it, she says, perhaps she's become desensitized to it.

The complex on the shore of the Patuxent River is full of dark, wet timbers from the mystery ship. The largest piece of the ship, called the apron, weighs in at 540 pounds. Doub puts the vessel's size at about 60 feet. She guesses it was a work boat, very solidly built, and used to transport cargo during the 1700s.

"This is a part of our country's history at a point when we had only just recently gained our independence, and where our nation relied very heavily upon our naval vessels as well as our ability to transport goods across water," Doub says. "And that really was a defining feature of who we were and how we were going to become the nation we are today." 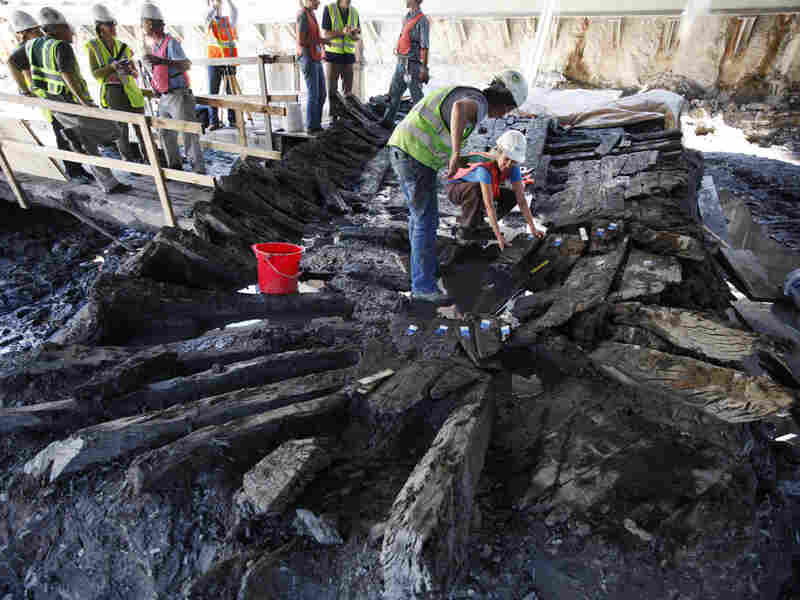 Archaeologists (right) begin dismantling the remains of a ship at the World Trade Center site on July 26 in New York. The 32-foot piece of the vessel was found 20 feet below street level, where workers are excavating for a parking garage. Mark Lennihan/AP hide caption 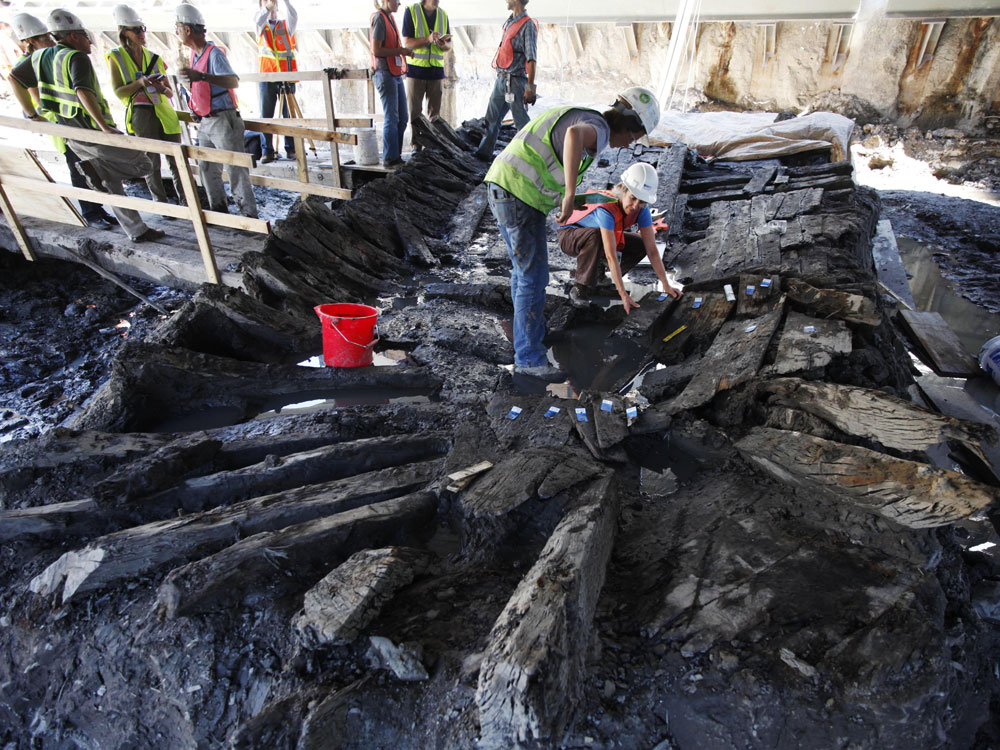 Archaeologists (right) begin dismantling the remains of a ship at the World Trade Center site on July 26 in New York. The 32-foot piece of the vessel was found 20 feet below street level, where workers are excavating for a parking garage.

But we don't know much else. Over the next few weeks, different experts will come to find clues. Someone will date the tree rings. Another will look at the woodworms.

The discovery of iron nails and spikes is causing the scientists to re-evaluate what they knew about shipbuilding technology at the time, which was thought to have relied more on wooden dowels. And the recent discovery of a coin, in a very special place, means they're going to have to call a coin specialist. Sara Rivers-Cofield, another curator, says the coin placement is an important clue.

The coin was found between the keel and the stern post. Rivers-Cofield says it's a tradition, dating back to the ancient Greeks, to place a coin there during construction to bring good luck to the ship.

"The thrill of discovery never stops, even when you're not digging anymore," Rivers-Cofield says.

A photographer is documenting each of the more than 400 pieces and using 3-D technology to create a digital catalog. Another curator traces an outline on acetate of every single piece. Doub says everyone wants to be involved in solving its mystery.

"They [the ships] are very romantic ... everyone thinks of the voyage and, you know, the danger involved in it," she says. "I think there's something that everyone recognizes and has some form of attachment to, whether you've been on one or not."

And the public can be part of it, too. The Maryland lab offers tours so visitors can come see -- and most definitely smell.