Accessibility links
China, Pakistan Floods: Preventable Disasters? Thousands have died in the flooding and mudslides. But experts say some of the damage could have been prevented. Migration and development have outstripped government planning in many areas, particularly with the rapid economic growth and urban expansion in China. 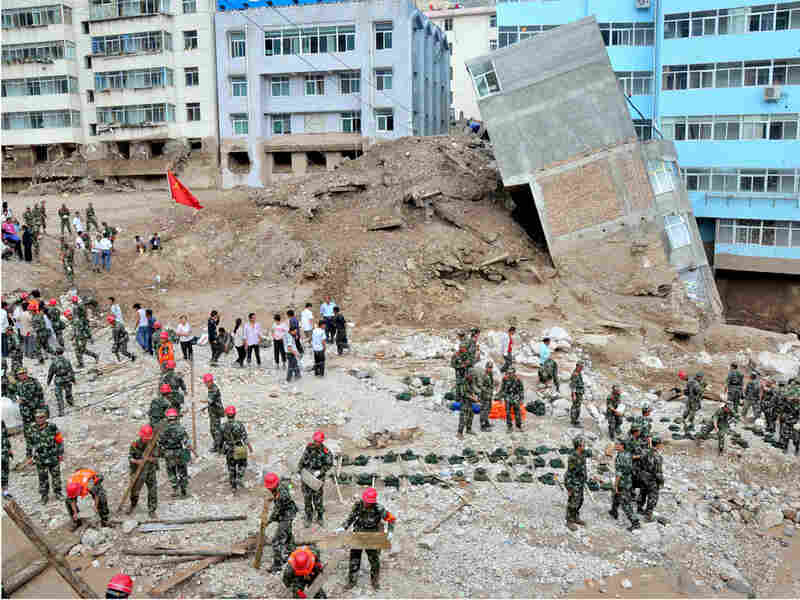 Rescuers search for survivors after a mudslide swept through Zhouqu, China, on Sunday. A hillside gave way above high-rise buildings in a highly developed area. AFP/Getty Images hide caption 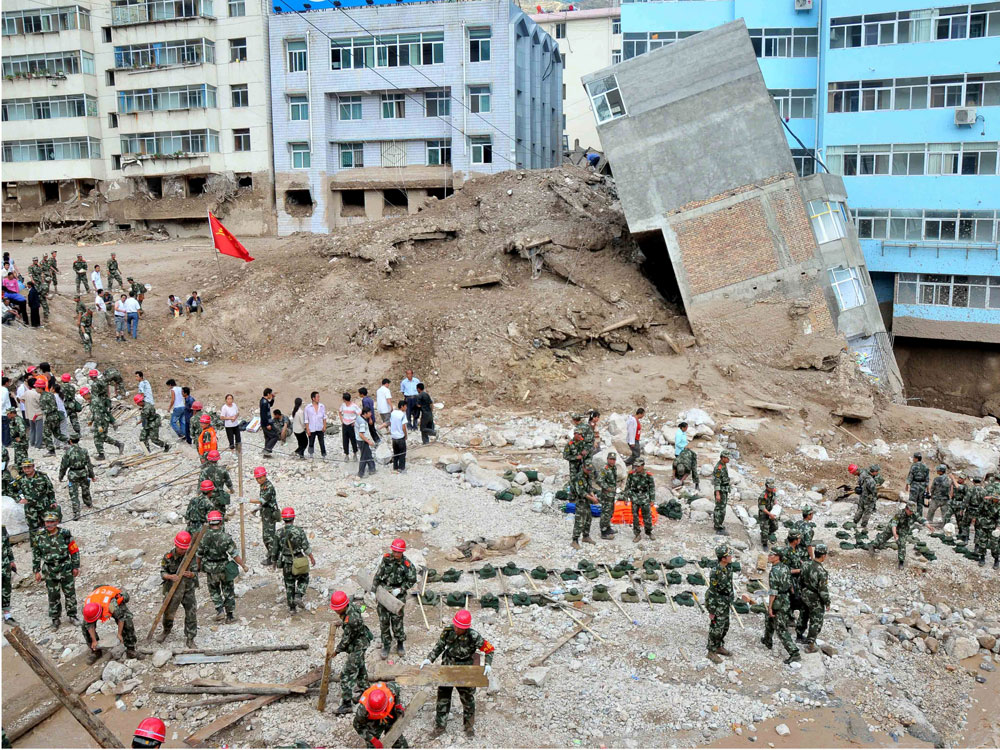 Rescuers search for survivors after a mudslide swept through Zhouqu, China, on Sunday. A hillside gave way above high-rise buildings in a highly developed area.

The latest flooding and mudslides in China and Pakistan have killed thousands and are challenging the definition of "natural" disasters. They raise questions about how much of the damage comes from the forces of nature and how much is the result of human activity.

The floods in China are the worst in decades, despite the billions of dollars that the Chinese government has spent on giant dam projects designed to mitigate flooding of the country's major rivers.

So far, more than 1,100 people have been confirmed dead in the northwest province of Gansu, and more heavy rain is predicted in the coming days.

Pakistan is experiencing its heaviest monsoon rains on record, killing more than 1,600 people and displacing millions.

These disasters are deadlier and costlier because of the high concentrations of people and development in their paths. Experts say the strategies for reducing such losses are well-known. What's lacking is the political will to put them into effect.

Migration and development have outstripped government planning in many areas, particularly with the rapid economic growth and urban expansion in China. Cities have swollen as people migrate from the countryside in search of work. Poor people typically wind up squatting on land -- in many cases, on land that was unused before because it was known to be unsafe.

The 2004 Indian Ocean tsunami was considered by many to be a global wake-up call. The disaster, which began with an undersea earthquake on Dec. 26, is thought to have killed more than 230,000 people in 14 countries.

Less than a month later, a world conference in Kobe, Japan, came up with a strategic plan for reducing losses from disasters. The main idea was to make disaster planning a part of government development policies so countries would be more resilient to hazards.

Ben Wisner, an expert on hazards in the developing world, says China has imposed "a kind of superficial structural modernism" in some of its least-developed areas. That includes building schools, hospitals and housing blocks in places that had little infrastructure before.

"A lot of the policies have been really progressive, for instance, trying to encourage primary and secondary education in formerly isolated areas," Wisner says. "But the problem was that a lot of the schools were poorly built, and they're the ones that fell down in the [2008 Sichuan] earthquake."

Unsound building practices in unsafe areas -- such as unstable hillsides or flood-prone riversides -- can compound the damage and casualties from events that would have been fairly minor in the past.

It's not that governments don't understand the problem, says Kathleen Tierney, director of the Natural Hazards Center at the University of Colorado, Boulder.

Reacting To, Not Preventing, Disasters

Tierney, who just returned from a teaching and research stint in China, says Beijing is developing fairly effective mechanisms for dealing with disasters after they occur.

"They have a very clear role for the army, and they have the capability to rescue people and provide relief," she says.

But when it comes to preventing losses from disasters, Tierney gives the Chinese government lower marks. "Chinese officials understand that they face multiple hazards, but they're not yet doing a good job to mitigate those hazards," she says. 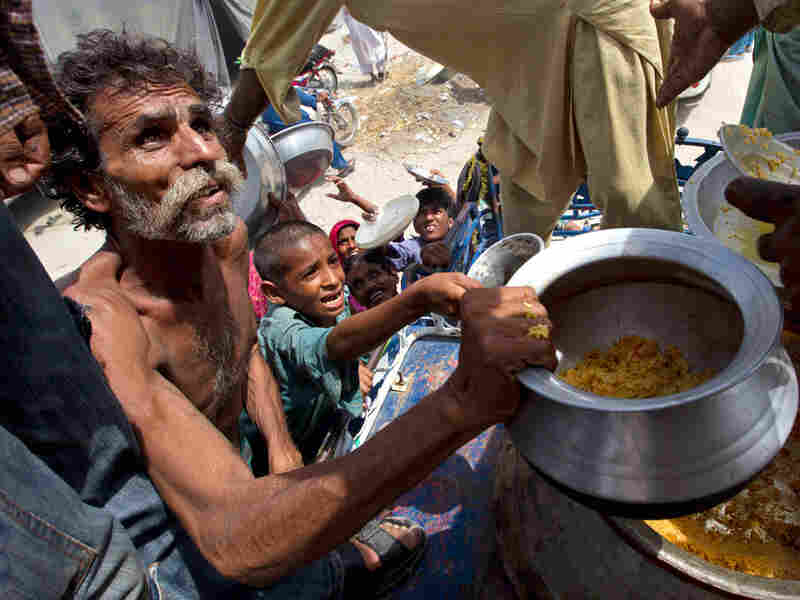 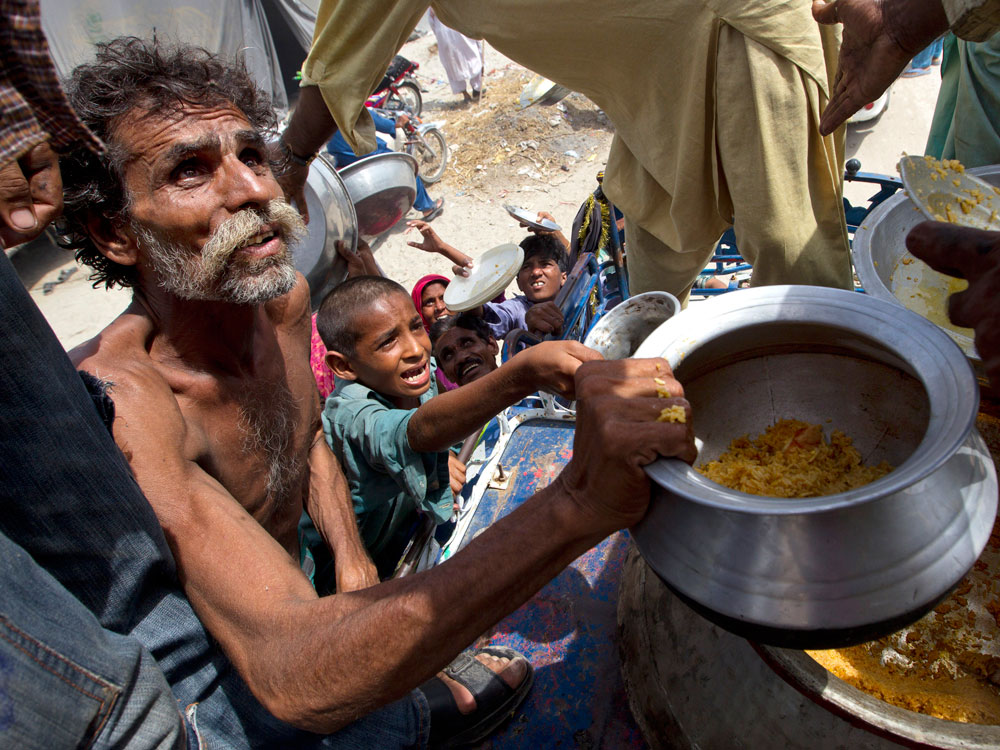 Desperate flood victims scramble for food Friday during distribution by a local Muslim organization offering rice for the hungry survivors in Sukkur, Pakistan.

Wisner, who has advised the U.S. Federal Emergency Management Agency and the United Nations on disaster-risk reduction, says that ultimately dealing with calamity is a matter of political will. "The expertise exists," Wisner says. "All this stuff is known. The question one has to ask is why are these mistakes [in development] being made over and over again?"

Wisner says that development decisions are too often controlled by wealthy elites who have no interest in protecting people who have been marginalized by poverty. Even where a government wants to do the right thing, he says, decisions on development are often made from the top down, without consulting with local people.

Both Wisner and Tierney point out that governments should have a strong interest in mitigating natural hazards. As development surges, so does the human and economic cost of disasters. The experts note that governments have fallen when their people lost faith in their ability to deal with disasters.