Accessibility links
Chinese Experiment Seeks Secrets To Happiness Survey results on happiness in China seem to be entirely contradictory -- ranging from among the happiest people in the world to among the least. Now psychologists, as well as an entire Chinese town, are trying to answer the question of how China can become a happier place. 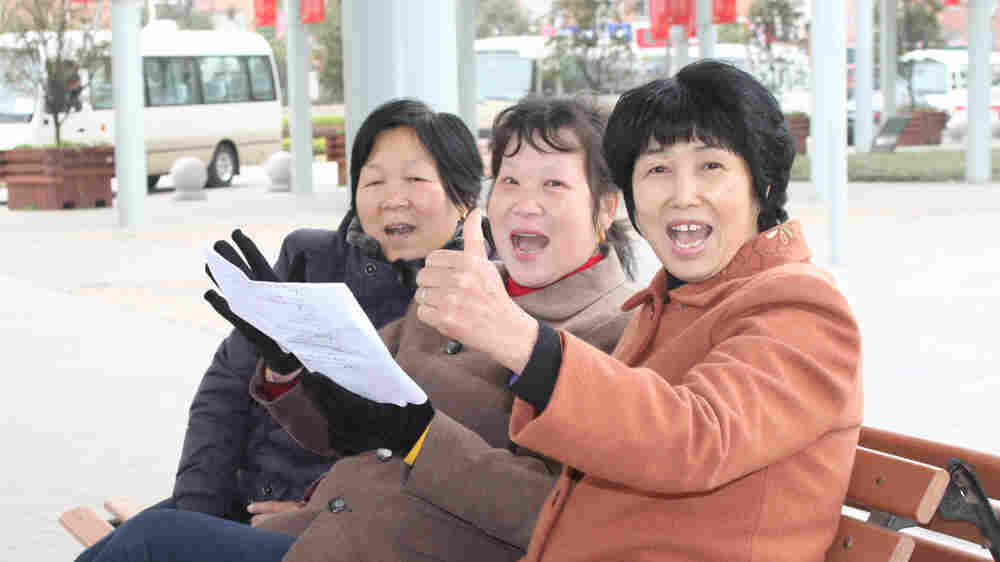 "Happy Jiangyin," a wealthy city in China's Jiangsu province, is an award-winning experiment in how to make people happier. It has come up with a list of ingredients it believes add up to happiness. Here, residents sing in one of Jiangyin's many public squares. Gary Sigley hide caption 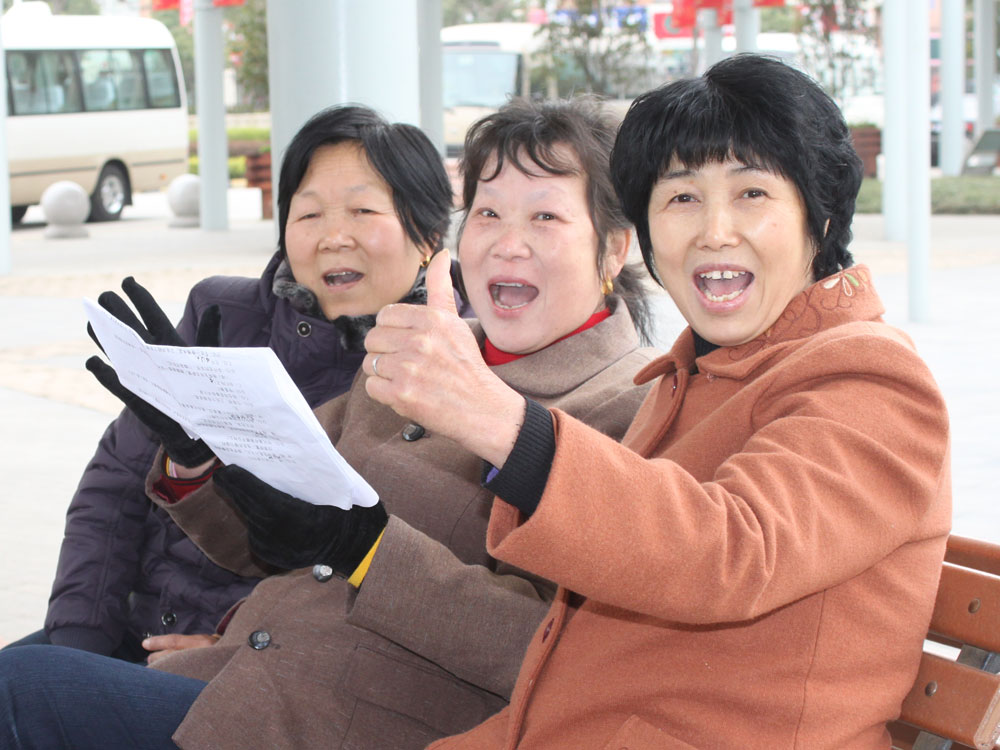 "Happy Jiangyin," a wealthy city in China's Jiangsu province, is an award-winning experiment in how to make people happier. It has come up with a list of ingredients it believes add up to happiness. Here, residents sing in one of Jiangyin's many public squares.

Last year, a book called China Is Unhappy topped the best-seller lists in the Middle Kingdom. It was a nationalistic screed arguing that China should stop debasing itself and stand up to its critics. But is China really unhappy? And how can it become happier?

That's a question that a number of psychologists -- as well as an entire Chinese town -- are struggling to answer.

Survey results on happiness in China seem to be entirely contradictory. The most recent Pew Global Attitudes survey found that 87 percent of Chinese people surveyed were satisfied with the way things were going in their country, making it the most satisfied country by far out of all they surveyed.

But a European Union survey ranked China 128th out of 150 countries in terms of happiness. And one recent survey of 50,000 college students showed a surprising level of gloom.

Kai-Ping Peng of the University of California, Berkeley, worked on the survey of college students.

"Sixty percent of people are not very happy about life, and sources of unhappiness include mistrust in government," he says.

Inequality and environmental issues were other major sources of unhappiness, as well as the lack of channels for expressing dissatisfaction, Peng says. These are object lessons in how quickly psychology in China tips over into the delicate topics of governance and dissent. 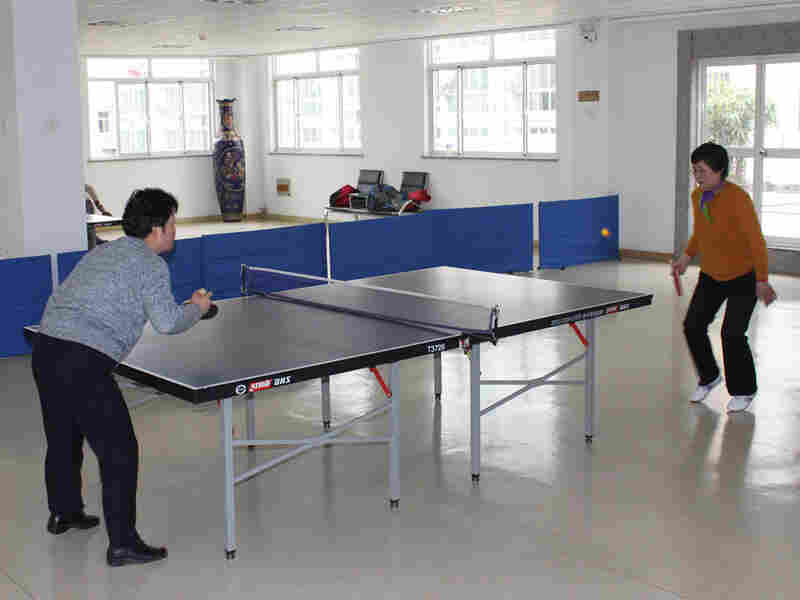 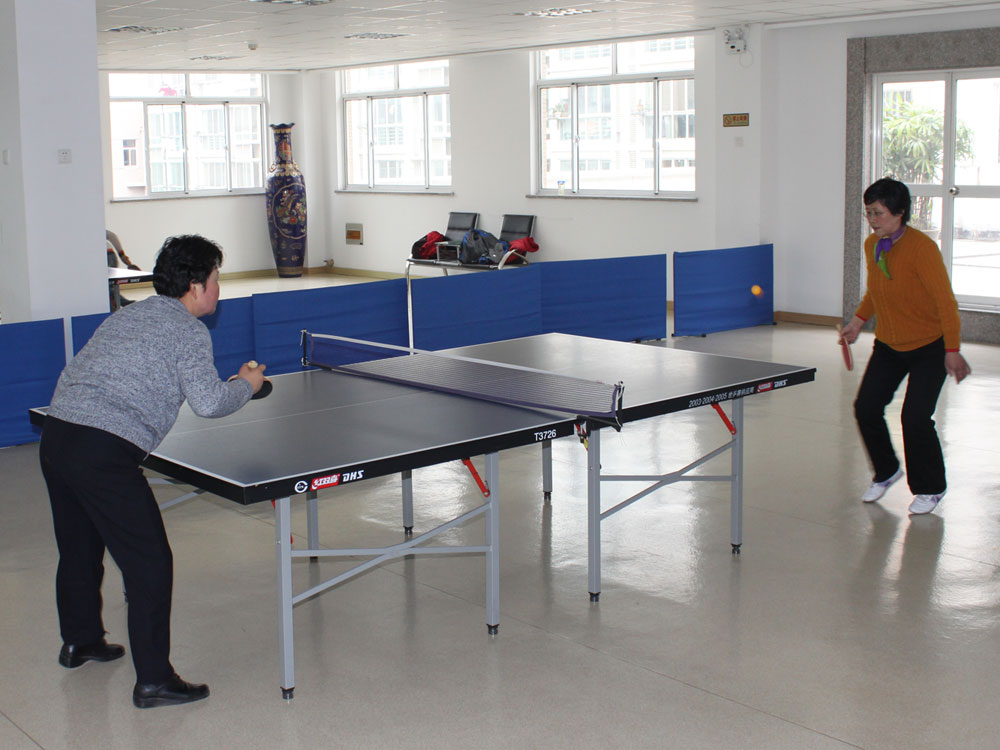 Among the things that Jiangyin officials believe make for a happier population are health care and employment. Here, residents at the Jiangyin Sunset Retirement Village play table tennis.

In Search Of Key(s) To Happiness

In recent months, China has seen a shocking outlet to that dissatisfaction: a series of six stabbings in schools this year, leaving 20 people -- mostly children -- dead and more than 80 injured. While this is clearly a mental health issue, the Chinese press is also labeling it "social terrorism."

Zhang Jianxin, the deputy director of the Chinese Academy of Science's Institute of Psychology, outlines the profile of a social terrorist.

"It's someone who can't resolve their problems, who receives no sympathy or help from society, and who might start thinking of revenge. And the simplest way of taking revenge on society is to target the weakest members of society: children," Zhang says.

At China's first conference on positive psychology, held at Beijing's Tsinghua University in August, psychologists tried to address the problem of how to lessen that social and political alienation, and build a happier China.

One answer is that in China, it appears that money can buy happiness. According to research, for those Chinese earning less than $450 a month, every extra cent increases their happiness.

Beyond that, it becomes more complex. Psychologists say the foundations for happiness include political and social participation and good governance. And one city is trying -- in true Chinese, top-down fashion -- to make its citizens happy.

An Experiment In Happiness

"Happy Jiangyin" is the name of this award-winning experiment that won the China Local Government Innovation Award. Instead of just aiming for economic growth, for the past four years this wealthy city in Jiangsu province has come up with a list of magic ingredients it believes add up to happiness.

Besides health care and employment, it has such diverse targets as how much people should donate to charity (more than $7.35 per capita each year) and how many doctors there should be (26 per 1,000 people.)

In a speech at the conference, Jiangyin's Communist Party committee's head of propaganda, Xu Dongqing, even announced "democracy is good." However, Xu wasn't referring to Western multiparty democracy as it's generally understood.

"The Communist Party is the ruling party, and other parties offer advice and suggestions," he tells NPR. "Under this system, we are trying to further use people's wisdom and suggestions to help the government do better."

In political terms, Jiangyin is aiming for more political participation, without changing the fundamental system, though its indicators do reflect a move away from what some have criticized as China's obsession with economic growth.

If the official statistics are accurate, there have been some achievements: salary growth of 48 percent for urban residents in just four years and a 2 percent drop in rural unemployment to just 2.9 percent.

A Potemkin Village Or Glimpse Of Future?

However, it's worth mentioning that Jiangyin is one of the richest places in China. Last year, its average urban disposable income was more than $11,000: four times higher than the national average. But observers such as sociologist Robb Willer are still ambivalent.

"We saw a lot of things that are unambiguously positive: the construction of civic centers, senior centers, reduction of levels of economic inequality," says Willer, who teaches at the University of California, Berkeley, and has visited Jiangyin.

"But we were left with some questions that we'd be curious about, like how hard is it to become a member of this? What are the barriers to membership that might guardian these numbers that are reported [and] keep them very high?" he asks.

It's difficult to know if Jiangyin is a Potemkin village for show -- or if this high-profile project may provide a glimpse of what China might look like in the future. And as for knowing whether China really is happy, the psychologists say that even defining happiness in a Chinese context is challenging, let alone measuring happiness there.