Accessibility links
Monkey Business: Fairness Isn't Just A Human Trait Humans and monkeys share more than physical evolutionary heritage -- they share many behavioral traits, too, like the concepts of fairness and curiosity. Monkeys, like humans, are able to recognize when they receive less than someone else. 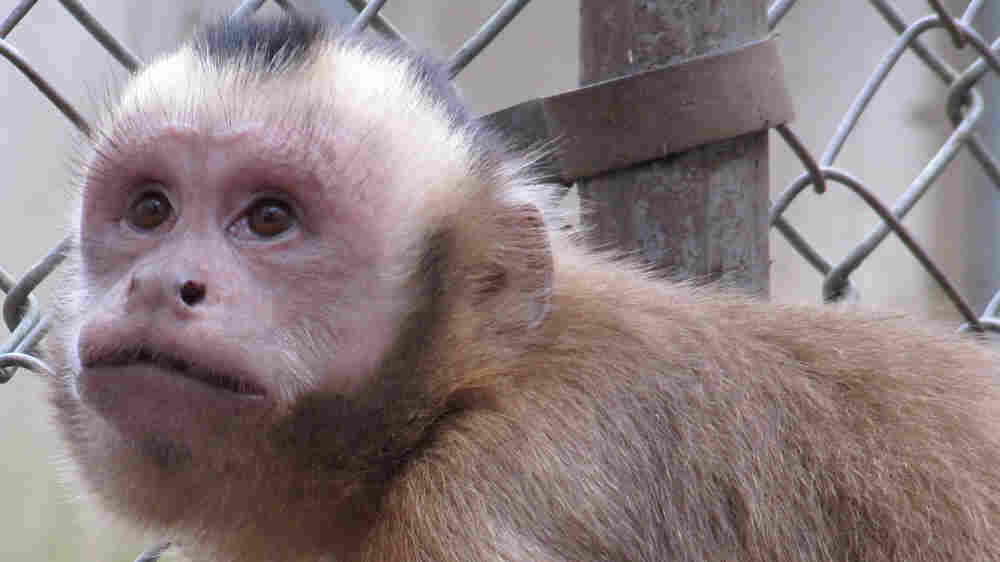 Liam, a capuchin monkey, will respond differently to a simple test if another monkey receives a more favorable food reward for performing the same task. Laurent Pretot hide caption 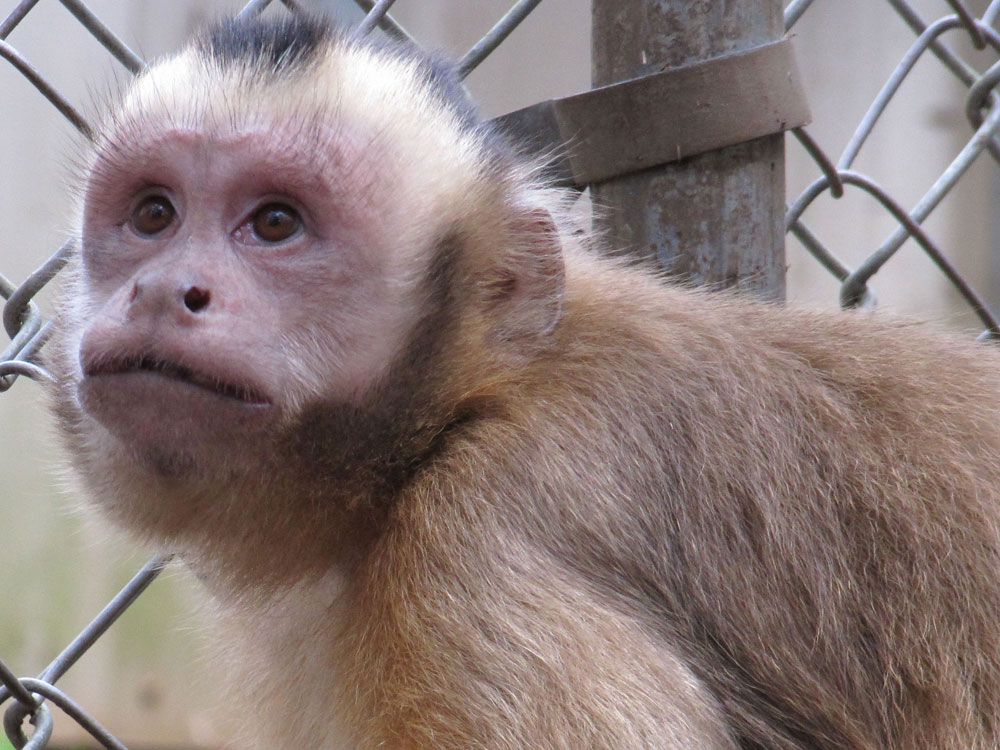 Liam, a capuchin monkey, will respond differently to a simple test if another monkey receives a more favorable food reward for performing the same task.

Showing your humanity usually refers to an act of kindness or charity. Treating someone humanely means treating him fairly and with dignity. But are these traits really unique to humans?

Psychologist Sarah Brosnan wants to find out. She argues that traits like fairness and curiosity are essential for any social animals to survive and live together. To show that, Brosnan works with capuchin monkeys at the Language Research Center, a part of Georgia State University.

The capuchins here are "living in a normal social environment,” she says. "So they spend the vast majority of their day out here running around playing together, and we just separate them out for the testing.”

The monkeys climb over branches in the cage, swing from the top of the cage, wrestle with each other. When it's time for testing, the animals go indoors. 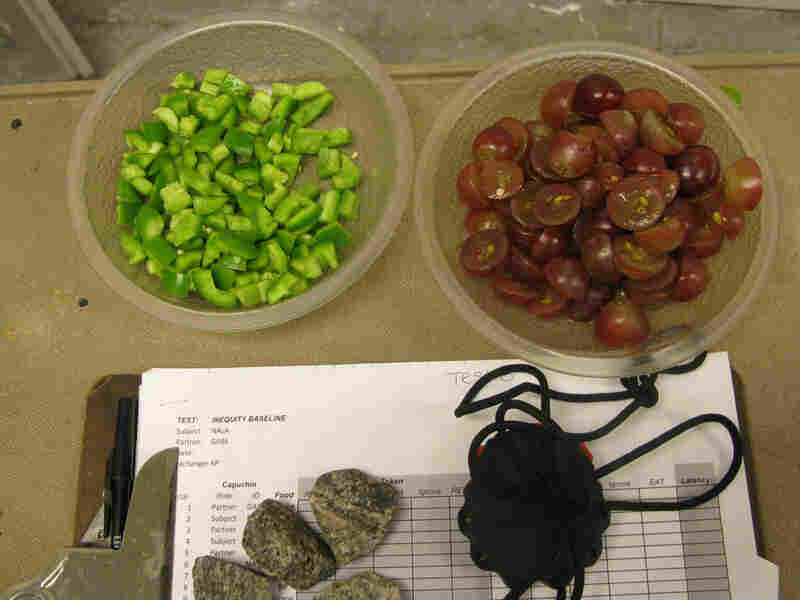 Monkeys can exchange a granite token for a food reward — either a tasty grape or a less desirable pepper. The capuchins respond differently in the test depending on which food reward a neighboring monkey receives. Kim Darnell hide caption 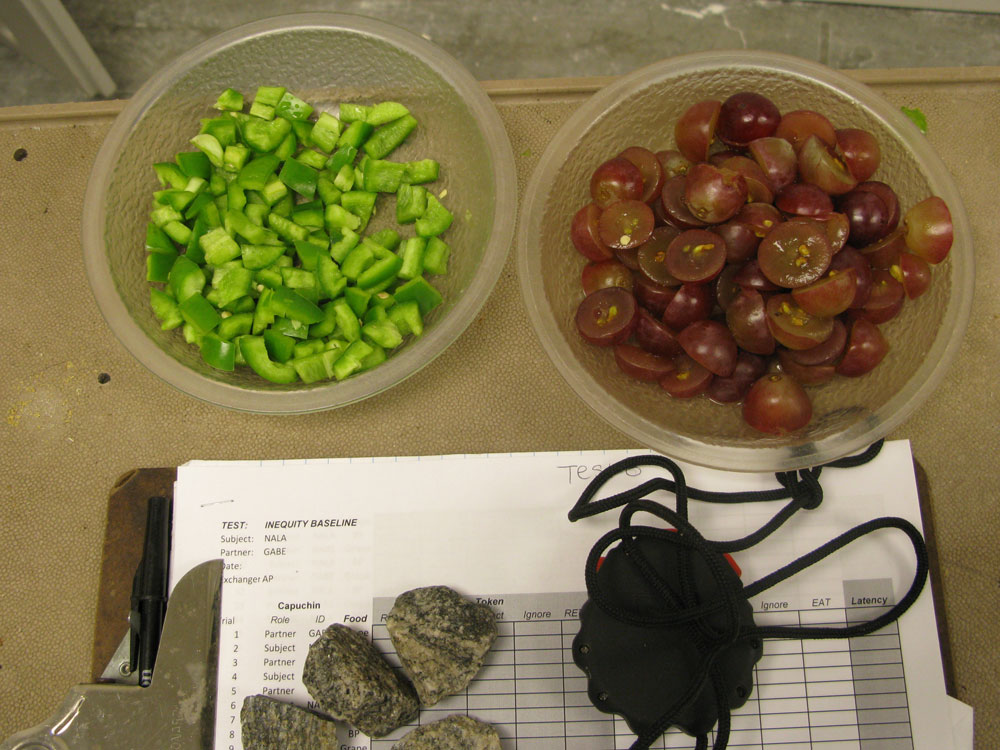 Monkeys can exchange a granite token for a food reward — either a tasty grape or a less desirable pepper. The capuchins respond differently in the test depending on which food reward a neighboring monkey receives.

On this day Audrey Parrish is testing two capuchins, Liam and Logan. The test tries to get at the concept of fairness in capuchins. It isn't too tricky: Audrey hands Liam a granite token, and he hands it back to get a food reward. Audrey alternates between Liam and Logan.

Now here's the twist. Sometimes each monkey gets the same reward, sometimes not. And there are two different kinds of rewards: a scrumptious, extremely desirable grape, or a ho-hum piece of only somewhat desirable cucumber. Think ice cream cone versus celery stick.

What she finds is that more often than not, a capuchin offered the less desirable reward after his partner gets the good one refuses to hand back the token.

"What we're really testing is how do you respond when you're the one that gets the lower salary, not how do you respond when you hear there's a discrepancy between salaries in the environment," says Brosnan. "So they don't necessarily have to have an ideal of fairness or an idea of the way the world should work. All they have to care about is they got less than someone else."

[The monkeys] don't necessarily have to have an idea of fairness or an idea of the way the world should work. All they have to care about is they got less than someone else.

Brosnan sees this work as evolutionary proof that animals have some of the same complex social rules that humans do.

Clive Wynne isn't so sure. Wynne, an animal psychologist at the University of Florida, says you don't have to invoke ideas like fairness or inequity to explain the capuchins' behavior.

There's an older concept, a more basic concept of frustration that humans share with many other species: "The tendency to act up if something they were expecting to receive is not given to them," says Wynne. "So if a child is in the habit of receiving a piece of chocolate for completing their homework, and they don't get their piece of chocolate, they may throw a tantrum. And that kind of frustrative behavior is seen in any number of different species."

Brosnan says whether or not you accept terms like fairness or inequity to explain what the capuchins did in the fairness test, she insists you can see unmistakable echoes of human behaviors in her capuchins.

Take curiosity. Brosnan points to what the capuchins did the first time they saw me and my recording gear -- they all came over to have a look. "They're curious about you," she says. "They haven't seen you; they haven't seen a mic before. So they want to see what it is. Is it going to do anything to them like give them food, or is it going to be a threat?"

Brosnan says curiosity -- that desire to explore your world -- is key to human culture. Humans went beyond being curious about food and threats and began to wonder where we came from and why the stars twinkle in the night.

You can also see beginnings of another important human social activity in capuchins: the desire to play -- to do things that have no immediate payoff.

"You're not acquiring food; you're not mating; you're not defending yourself from a predator," says Brosnan. But saying play is purely social is not to suggest it isn't important -- it helps juveniles learn the limits of acceptable behavior in their groups.

Brosnan doesn't believe play is a behavior inherited from monkeys in a genetic sense "but instead is a behavior that all sorts of intelligent, socially living species that live in complex social groups -- and need to know their ways around [the groups] -- have evolved."

What humans and their big brains bring to the table is an ability to do more with these socially learned behaviors, to be curious about more things in our environment, and to extend concepts like fairness and inequity to make more complex societies.

"That probably explains why we're building city states, and other species are still in groups of 200," she says.

In other words, we had the human edge.