Accessibility links
'Ground Zero Mosque' Takes Campaign Center Stage When the president said Muslims have the right to build an Islamic center and mosque near New York City's ground zero, he shifted discussion away from topics his fellow Democrats had hoped to focus on. But the economy is still likely to be the campaign's No. 1 issue.

President Obama's public affirmation of an American Muslim group's constitutional right to build an Islamic center two blocks from ground zero in New York City may be his last word on the emotional issue.

"It's a debate that was had, and we've weighed in," White House spokesman Bill Burton said Monday when asked about continued agitation over the building plan. 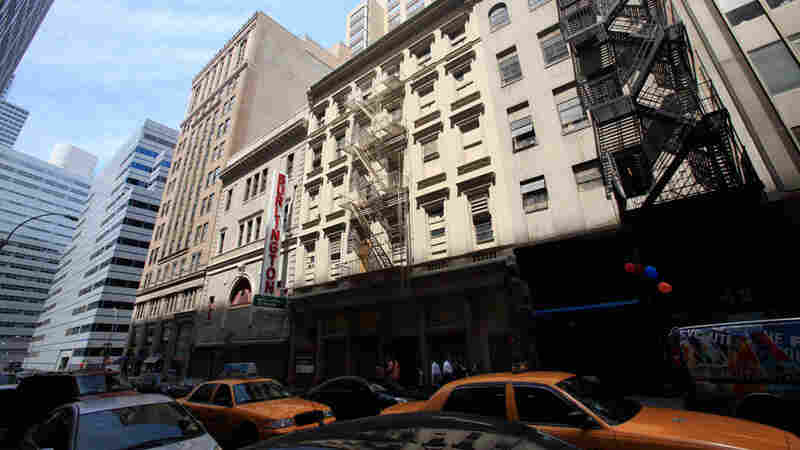 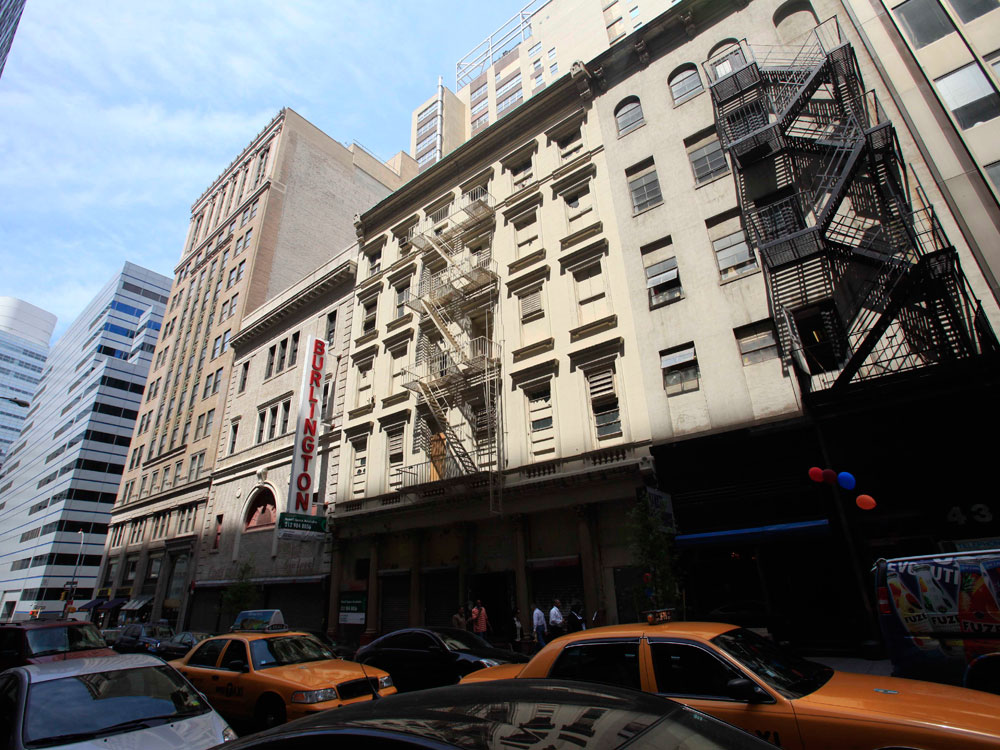 The proposed Islamic center would be two blocks north of the site where the twin towers stood, in a building previously occupied by a Burlington Coat Factory store.

But Obama’s comments, made Friday at a Ramadan dinner at the White House and expanded the following day when he said he was weighing in only on the group's right to build and not the wisdom of the location, have provided Republicans with fire-up-the-base fodder just three months from a midterm election in which the GOP hopes to make dramatic gains.

And they’ve precipitated a dramatic detour from campaign messages that beleaguered Democrats hoped to be delivering in their home districts this month during Congress’ annual summer recess.

"Politically, this is a short-term flashpoint," says Democratic strategist Peter Fenn, referring to the Islamic center debate. "But the problem with issues like this -- whether it's the debate over the mosque, over the oil spill -- it takes you off your message."

After a disastrous summer last year, when Democratic legislators in town hall after town hall were berated by opponents of health care legislation, this one was supposed to be different. 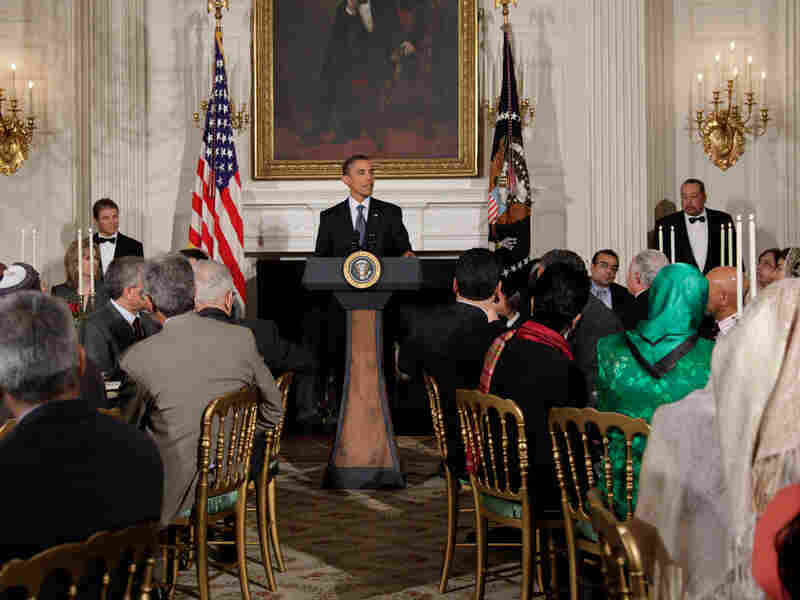 President Obama spoke of Muslims' right to have a center near ground zero at an Iftar dinner he hosted at the White House on Friday. J. Scott Applewhite/AP hide caption 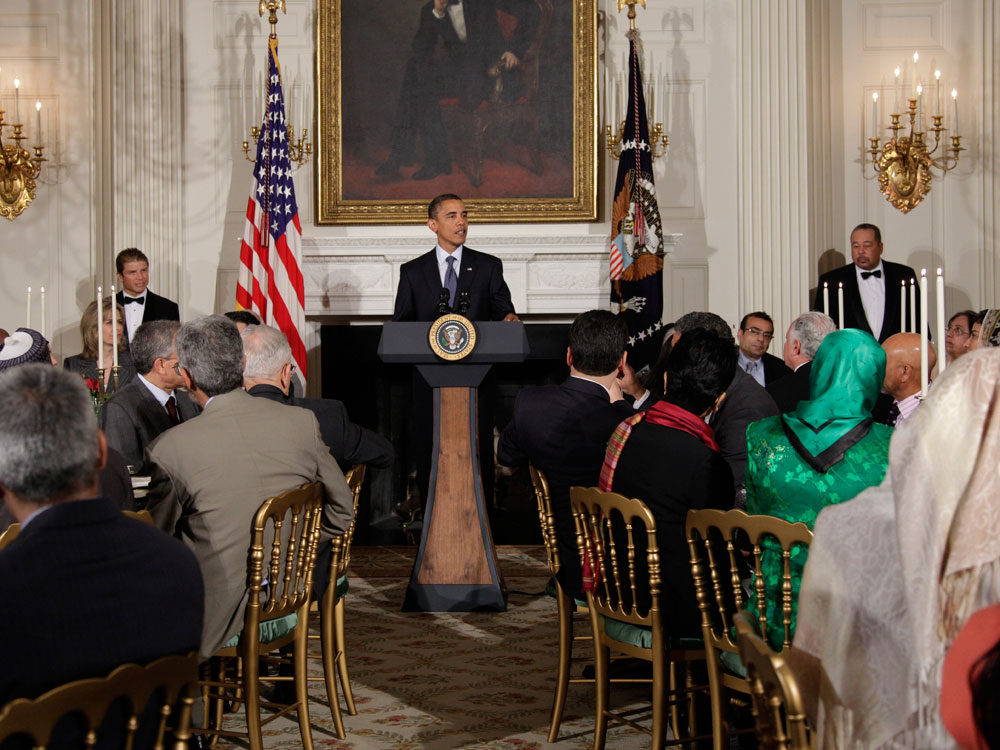 President Obama spoke of Muslims' right to have a center near ground zero at an Iftar dinner he hosted at the White House on Friday.

Democratic leaders in the House and Senate last week called legislators back to Washington from their breaks to approve a $600 million border security package designed to discourage illegal immigration from Mexico, and a $26 billion state aid bill that included money for teachers' positions and other public sector jobs.

And they used last week’s 75th anniversary of Social Security to launch a coordinated effort to charge that Republicans, led by Wisconsin Rep. Paul Ryan, want to "end Social Security and Medicare as we know it."

Discussions back home this summer, party leaders were convinced, would not be about nonexistent "death panels" but about more beef on the border, a bill that saved teachers' jobs, and a party that champions Social Security benefits.

Instead, the news that hit Monday was about Senate Majority Leader Harry Reid of Nevada breaking with Obama, calling for the Muslim center to be built "someplace else." Reid, in a tight fight to retain his seat this fall against Tea Party favorite GOP candidate Sharron Angle, joined other Democratic candidates in repudiating the president's position.

"The topic was not a topic that any of the candidates here in Florida were publicly or vigorously discussing prior to President Obama's remarks," says Justin Sayfie, a lawyer and government relations consultant who worked in former Florida Gov. Jeb Bush’s Republican administration.

At an Iftar dinner he hosted at the White House:

"As a citizen, and as president, I believe that Muslims have the same right to practice their religion as everyone else in this country. And that includes the right to build a place of worship and a community center on private property in Lower Manhattan, in accordance with local laws and ordinances. This is America. And our commitment to religious freedom must be unshakable. The principle that people of all faiths are welcome in this country and that they will not be treated differently by their government is essential to who we are. The writ of the founders must endure."

"In this country we treat everybody equally and in accordance with the law, regardless of race, regardless of religion. I was not commenting and I will not comment on the wisdom of making the decision to put a mosque there. I was commenting very specifically on the right people have that dates back to our founding. That's what our country is about."

"By personally commenting on it, he injected it into the races for senator and governor here," Sayfie says.

They represent the reality that the emotional issue, and opposition to Obama's position, are by no means limited to the opposition party.

"The reason most voters are opposed to the mosque has very little to do with being against religious freedom or Islam and more to do with a gut reaction," says Republican consultant Steve Lombardo, who worked on President George H.W. Bush's 1992 campaign and was an adviser to Mitt Romney during the former Massachusetts governor's 2008 presidential run.

"Right now, it’s a visceral feeling -- this is a place where Americans died," Lombardo says, despite the fact that it is a misconception that the Islamic center, which would include a mosque at the site of what used to be a Burlington Coat Factory outlet, would sit on ground zero.

"Voters in Ohio do not sit there with a map of Manhattan in their heads -- all they understand is 'ground zero mosque,' " Lombardo says. "It's now a noun."

Before the mosque debate acquired national status, the campaign issues for both parties where shaping up fairly clearly.

-- And the presidents: Obama and George W. Bush

Now the mosque debate has joined the queue, but, for how long?

Question: Where exactly would the Islamic center be located?

Answer: The address is 45-47 Park Place, two blocks north of the World Trade Center site where nearly 2,800 people were killed in the Sept. 11 attacks.

The building, which once housed a Burlington Coat Factory store, was closed after being damaged by debris from the attacks. SoHo Properties, a private real estate development company and partner in the Islamic center project, bought the building in 2009 for $4.85 million. Muslim prayer services have been held each week there since then.

Lombardo says that the issue has the potential to affect certain races this fall. "Clearly this has an emotional pull with voters across the political spectrum," he says. "I can understand how Republicans see it as helpful this fall.

"This is a low-turnout, base election for both parties and they're all looking at anything that gets the base going."

He is among many, however, who say they believe it's unlikely that the mosque will become a defining issue for the fall elections beyond Labor Day.

Potential Risk For The GOP?

Texas Sen. John Cornyn, who heads the Republicans' effort to elect more senators, has embraced the mosque issue. On Monday his National Republican Senatorial Committee issued a press release trumpeting support for the mosque by a co-founder of Hamas -- a clear attempt to make it look as if Democrats agree on that issue with a terrorist organization.

GOP strategist Cameron Lynch sees some peril, however, in the party flogging the issue too hard.

"I believe in freedom of religion, but they could have built this thing 15 blocks away," he says. "But there has to be a delicate balance in showing empathy for the 9/11 families that oppose the center, while also adhering to the Bill of Rights."

"This will add more fuel to the fire for red-meat, base Republicans," he adds. "But a rabid Republican who goes crazy on this is not a good strategy -- we’re basically fighting wars to free these people."

Sayfie expresses the same caution: "With America fighting two wars in two predominantly Muslim nations, I hope that the larger context of this issue will be considered in terms of America's relationship with its allies in the Middle East," he says. 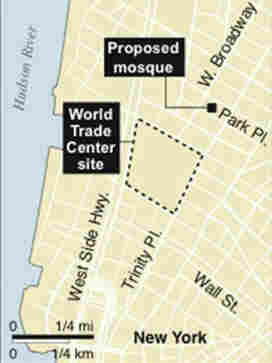 Andy Johnson, director of the national security program at the progressive Third Way Foundation, says that it's right to question the appropriateness of the Islamic center's proposed site.

"But it's up to the legal guidelines of the City of New York, its zoning, and the wishes of the property owners" as to whether it will come to pass, he says, calling the president's position "principled."

"We are not at war with the Muslim faith; we are at war with terrorism," he says. "It's really unfortunate and politically motivated to try to use a local development project to, in some way, suggest this administration isn't keeping focus where it belongs."

"This is going to be something of a litmus test for Republicans to show their conservative credentials," Johnson predicted.

Move Over Mosque: The Economy Is The Big Issue

Regardless of how long the Islamic center holds the nation's fickle attention, in the end, the midterm election will be about the economy.

The mosque, Social Security debates, even immigration will animate discussion in coming weeks, say strategists like Lombardo and Sayfie, but come November they will be eclipsed by the state of the economy.

"The most important issue, bar none, is how to get the American economy growing again," Sayfie says. "The mosque is something candidates are free to talk about, but at the end of the day, it's not an issue that’s going to have an impact on the lives of Florida’s 18 million residents."