Accessibility links
AOL Aims High With Hyperlocal Journalism Project The initiative, called Patch, launched its 100th local news site on Tuesday. AOL is expanding the program quickly and plans to cover 500 communities by the end of the year. But the company faces competition from well-established hyperlocal sites, and profitability remains to be seen. 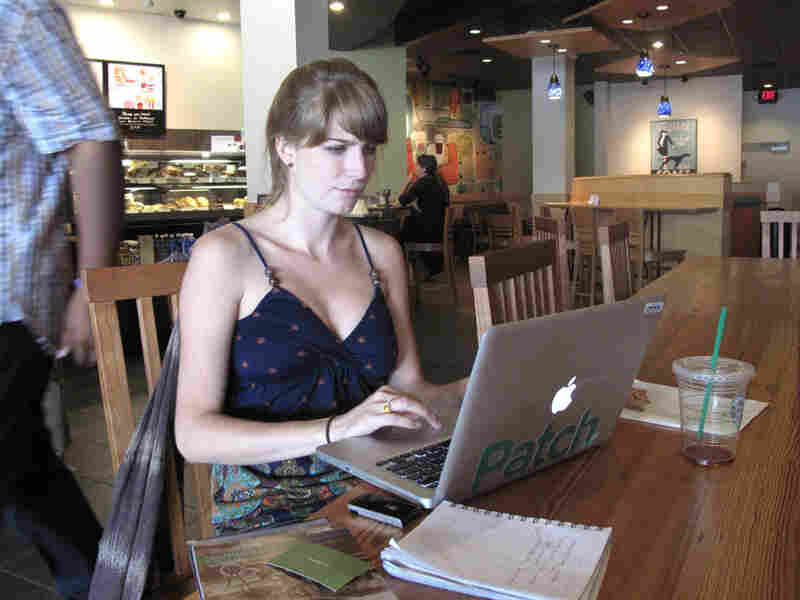 Lauren Evans, a Patch editor, works on her laptop at a Starbucks in College Park, Md. She says she works "pretty much anywhere" -- from bagel shops to the curb outside of a fire station. Tamara Keith/NPR hide caption 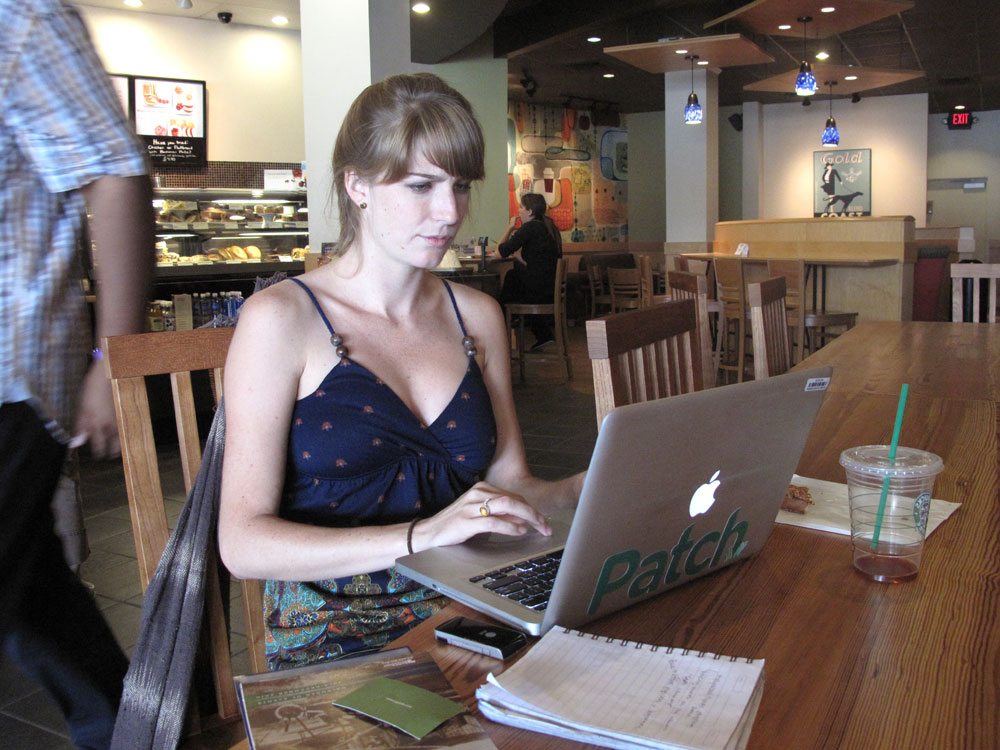 Lauren Evans, a Patch editor, works on her laptop at a Starbucks in College Park, Md. She says she works "pretty much anywhere" -- from bagel shops to the curb outside of a fire station.

AOL is best known as an Internet service provider, the one that sent out all those promotional CDs back in the '90s. Now, the company is working to reinvent itself, and as part of that, it is making a big push into hyperlocal journalism with a project called Patch.

On Tuesday, it launched its 100th local news site. Patch says it will expand to 500 small communities by the end of this year, but it faces big competition and an uncertain future.

Lauren Evans holds a BlackBerry up to her ear as she quizzes a College Park, Md., police sergeant about a recent wave of robberies. She is surrounded not by the buzz of a traditional newsroom but by other customers in Starbucks.

Evans says she works "pretty much anywhere" -- from bagel shops to the curb outside a fire station.

She was headed there to ask some questions about a new firetruck but ended up getting a call on another story. Evans describes herself as a one-woman news-producing machine.

That's the typical setup for Patch. It goes into a community with a population of 15,000 to 75,000 people, mostly upper-middle class. Then it hires one local editor, like Evans. The editor does most of the day-to-day reporting and writing, but also buys stories from freelancers. It's sort of the online equivalent of the free community paper that in a lot of towns doesn't exist anymore.

"A large part of the reason Patch exists is because there is this void in local news and information that we can fill," says Warren Webster, the president of Patch.

Patch is a network of local websites that cover city council meetings, school boards and things like local golf tournaments. Webster points to a story last year in which a Patch editor in Darien, Conn., uncovered the criminal history of a candidate running for local office.

"No one reported this and he was doing quite well in the election, and Patch broke the story that he had actually been convicted and in prison for shooting somebody," Webster says.

Other local media picked it up, and he ultimately lost the race. AOL has said it plans to spend $50 million on Patch this year, hiring hundreds of journalists along the way.

Ken Doctor, the author of the book Newsonomics, says the results have been mixed so far. "Some of it is kind of thin, you know, kind of more one-source stories," he says. "Some of them are better stories where you see some knowledge brought to the reporting, some experience. It's all over the board."

Doctor says having more local journalism is always a good thing, especially for the communities that are getting the coverage. He says he thinks building an audience and actually making money will be a challenge for Patch because there is already a lot of competition out there.

"It has Google, Yahoo and Microsoft in front of it on a national level. It has blog networks, daily newspapers, yellow pages -- companies ahead of it in some ways on a local level," he says. "It has the right spirit but it may be entering a very crowded marketplace."

Going local -- or, in many cases, hyperlocal -- is a growing trend on the Internet. Companies are looking to cash in on local advertising dollars and they are looking to position themselves for mobile advertising when that becomes more of a reality.

Jim Bankoff is CEO of SB Nation, a network of local sports websites, and a former AOL executive. He says his former employer is trying to reinvent itself with Patch.

"I think it would be guaranteed that they would be unsuccessful if they didn't take some bold bets, so this is a risky one," he says. "But it's one that at least is rooted in some logic: that the web is fragmenting, that the web is getting increasingly more local."

The key questions for Patch are the same for all companies in the media business -- new and old: Can they create a news product that an audience actually wants, and can they get companies to buy ads?