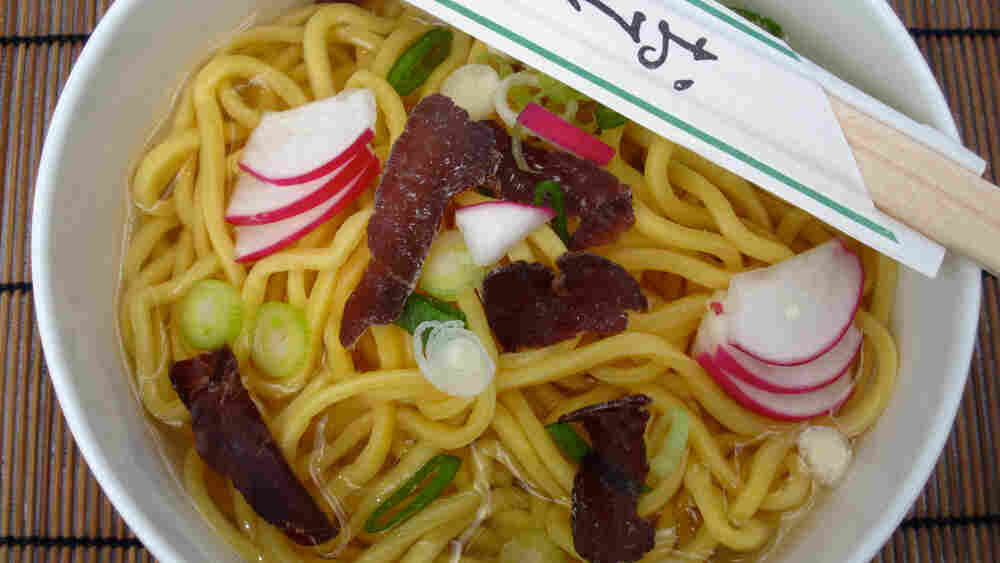 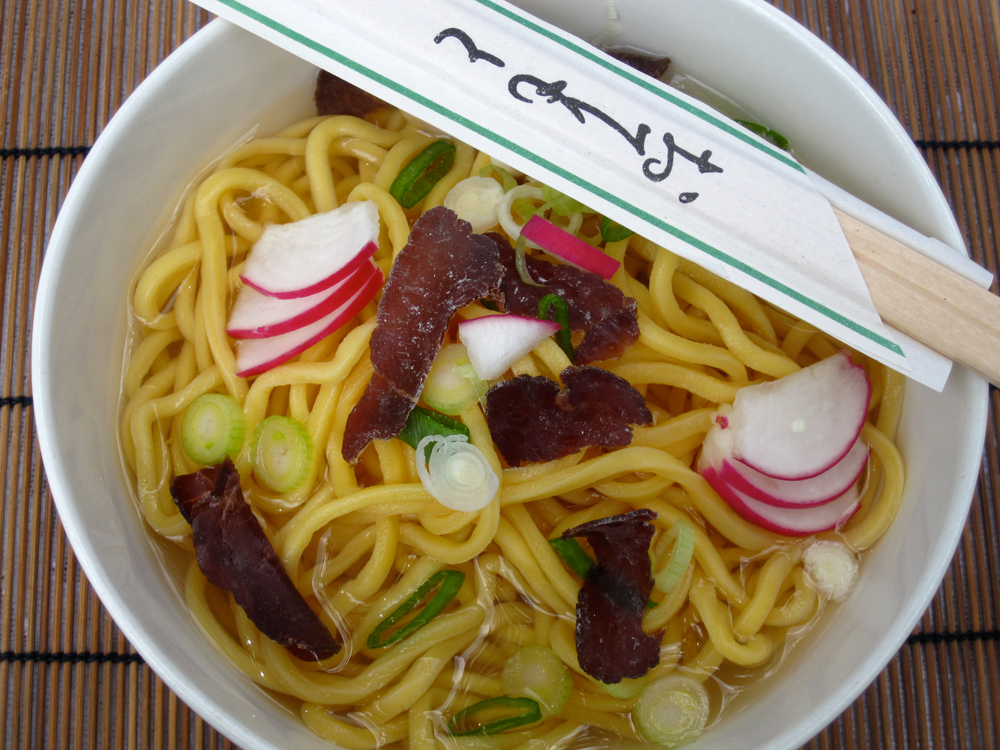 I remember the eager manager leading me down the supermarket's "ethnic" aisle.

"Right here," he said proudly as we stopped before a few pathetic boxes of matzo and a couple of jars of gefilte fish. He handed me the kosher salt I'd been looking for. "We'll be getting more Jewish items soon," he assured me.

Welcome to Hawaii, where kosher salt is "ethnic" but kimchi runs free among the prepared salads. Miso paste frolics with sauces and dressings, dried squid swims among the Doritos and other snacks, and the seasonings for the Portuguese pickled pork vinha d'alhos are in the spice aisle right next to the packets for Filipino adobo. Natch.

Honolulu was my home until five years ago, and I always found the "ethnic" aisle -- where taco shells and pasta had also been exiled -- the clearest expression of Hawaii's culture. In the late 19th and early 20th centuries, waves of Chinese, Japanese, Koreans, Filipinos and Portuguese arrived to work the sugar cane and pineapple plantations. In the fields, they connected their unfamiliar words with bits of English to create an enduring pidgin. They shared their lunches -- their noodles, their curries. And over the decades, they shared their families, marrying to produce the most ethnically diverse state in the country, and perhaps its only real melting pot.

And that pot got carried into the kitchen. It's filled with dishes like Spam musubi -- basically a giant piece of sushi, but with canned luncheon meat instead of fish -- and a snack-time soup of Japanese broth and Chinese noodles called saimin. It holds "hurricane popcorn," where butter is bumped for seaweed confetti and rice crackers; oxtail soup; smoky, greasy, kalua pig; and other items known simply as "local" food. A bits-and-pieces cuisine, "local food" is the culinary equivalent of pidgin. It's the stuff everyday people eat every day.

I know what you're thinking: What about poi? In nearly 10 years in Hawaii, I probably ate poi once. At a luau. Because I had to. For a story. Poi is Hawaiian food -- that is, the food of people who are ethnically Hawaiian. Local food is Hawaii food -- a geographic, not ethnic distinction.

Midday is prime time for local food, when lunch wagons line up by office towers to dispense Styrofoam containers of "plate lunch": heaping masses of Korean barbecued ribs, beef stew or teriyaki mackerel alongside mayonnaise-engulfed macaroni salad. At lunchtime, whole ahi tuna lie on the stainless steel counters of scruffy fish stores waiting to become poke -- cubes of raw fish dressed with seaweed and sesame oil that I call "poor man's sushi." Cold poke. Hot rice. Soft, salty, nutty, unctuous. On a recent visit, I went straight to my favorite deli to get me some. I also had a side of lomilomi salmon -- "massaged" salted fish that's iced with tomatoes and scallions.

"One scoop, two scoops?" the woman behind the counter asked me.

It's as though without rice you couldn't eat. And for good reason. There is no bread -- or at least no good bread, save the eggy, Portuguese sweet bread called pao doce. Even breakfast goes without bread. Like toast with your eggs? Rice mo betta. Rice makes a gooey mash with your yolks. Rice soaks up the flavor of the shoyu -- soy sauce -- that gets sprinkled liberally over the bowl. Rice offers a comfy bed for loco moco, the belly-busting surfer breakfast that adds a hamburger and gravy to the mix.

Mochi and other desserts veer toward Asian sensibilities, which means they're not sweet. But in the twists of Hawaii cuisine, everything else -- teriyaki sauce, the meat stuffing for Chinese buns -- has just a dash more sugar than most mainlanders would probably like. It's a legacy likely from the cane fields. But the yin and yang of sweet-salty is also one of local food's hallmarks. After a day on the beach, all I wanted was ice shaved to powder, packed over sweetened adzuki beans, drenched in lychee syrup and sprinkled with li hing mui, a fluorescent red powder that gives everything from shave ice to dried mango slices a salty kick.

And since we're on salt again, remember my box of Morton's kosher? The "ethnic" aisle was exactly where it belonged -- for Hawaii's needs. In the islands, salt comes from shoyu, and it sits on every table where other places put the salt shakers. Right next to the bottle of "chili peppah watuh," the spicy tincture that is Hawaii's answer to Tabasco.

I love poke. I love shave ice. I love oxtail soup. And yes, I even love Spam musubi. But what I love most about local food is that every time I dig my chopsticks into a bowl of noodles or a Styrofoam box of plate lunch, I can taste the cultures that created it, the things they gave and took from one another to make the 50th state the most authentically American of them all.

Sometimes called "poor man's sushi," poke tastes best alongside hot rice and cold beer. It must be eaten with chopsticks -- called "hashi" in Hawaii -- or your plate will be revoked. This recipe is adapted from The Food of Paradise by Rachel Laudan (University of Hawaii Press 1996). Any sushi-grade fish, or even octopus, can be used for poke. The best place to look for any items that seem obscure is an Asian market. 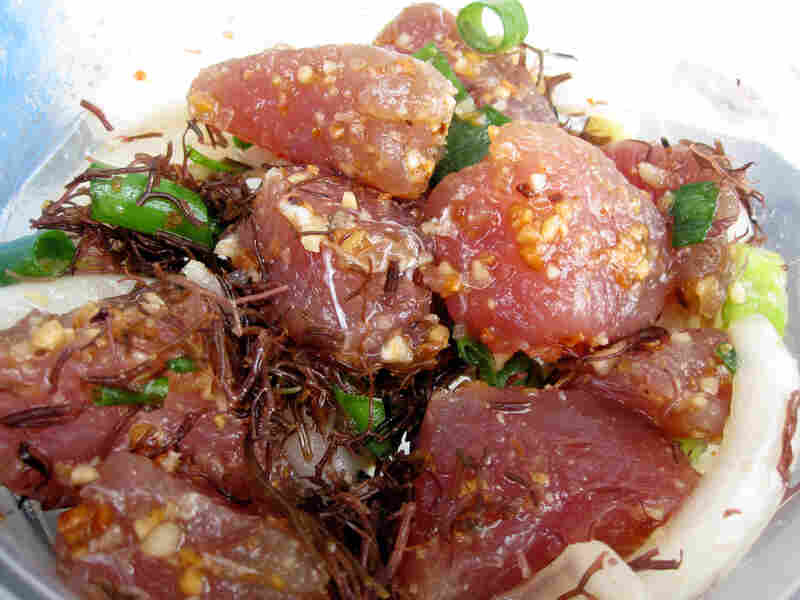 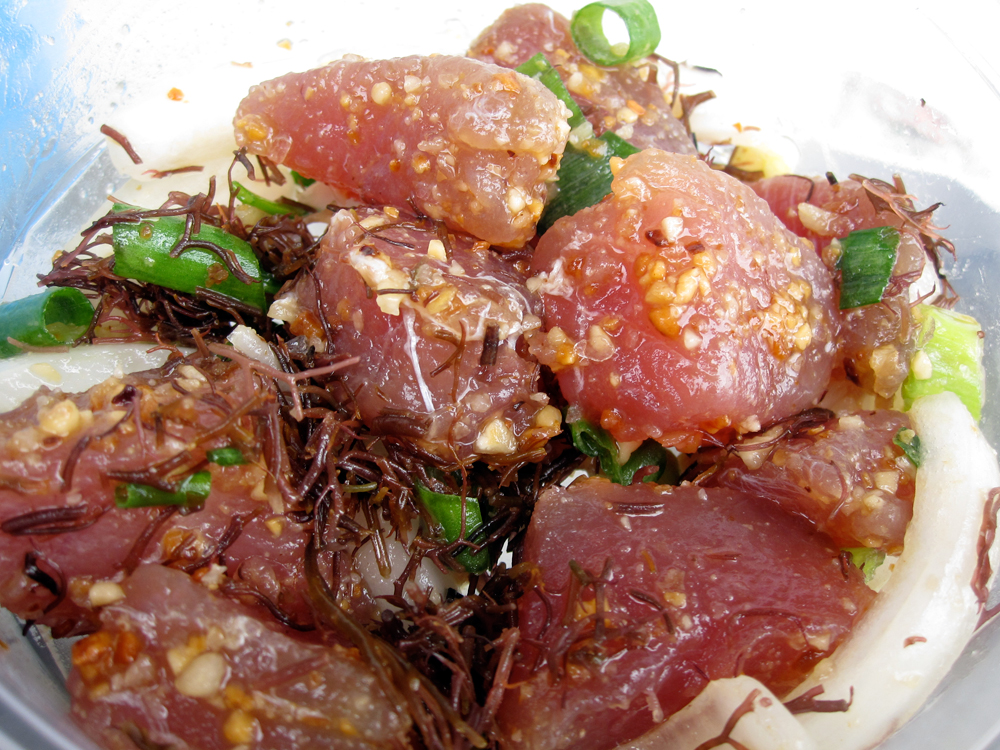 Mix gently with the fish, being careful not to mash it, and add shoyu to taste. Serve well chilled, alongside a bowl of hot, short- to medium-grain rice

Variation: My favorite variation leaves out the shoyu and adds sesame oil, ground candlenut (Brazil nut can be substituted), a bit of sliced scallions and rock salt.

Lomilomi means "massage" in Hawaiian, and this dish is prepared by rubbing the ingredients between your fingers. Though lomilomi salmon is now considered luau fare, cookbook author Ann Kondo Corum says salted salmon was introduced to the islands by Westerners. This recipe is adapted from her book Ethnic Foods of Hawai'i (The Bess Press 2000). The best place to look for any items that seem obscure is an Asian market. If you can't find salted salmon -- a Japanese staple called shiozake that is like salt cod -- substitute lox. 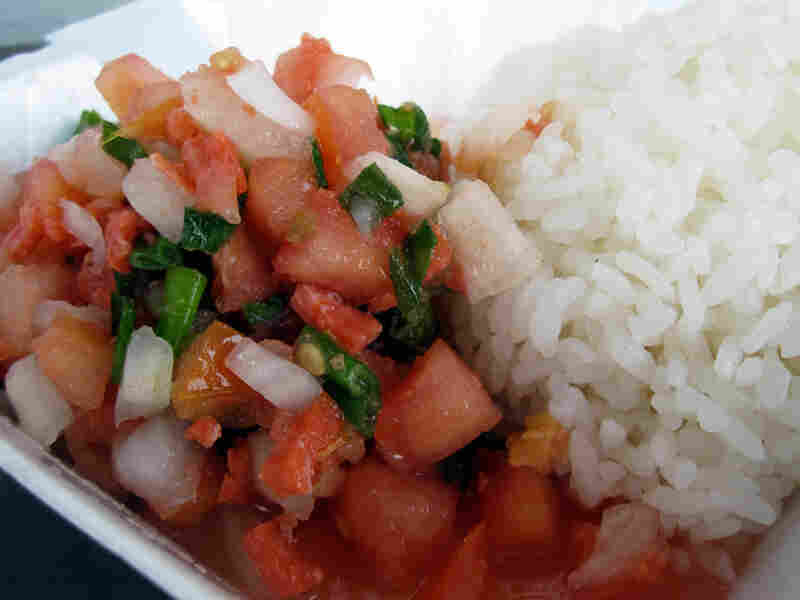 Soak salted salmon in cold water for 1 hour. Rinse and repeat if necessary to temper saltiness. Drain and pat dry. Remove skin and bones from salmon and shred with your fingers.

Place salmon in a bowl, add tomatoes and both onions and mix thoroughly. Chill for at least 2 hours.

Truly the breakfast of champions, the mix of fat, carbs and protein in this dish keeps surfers going all day. 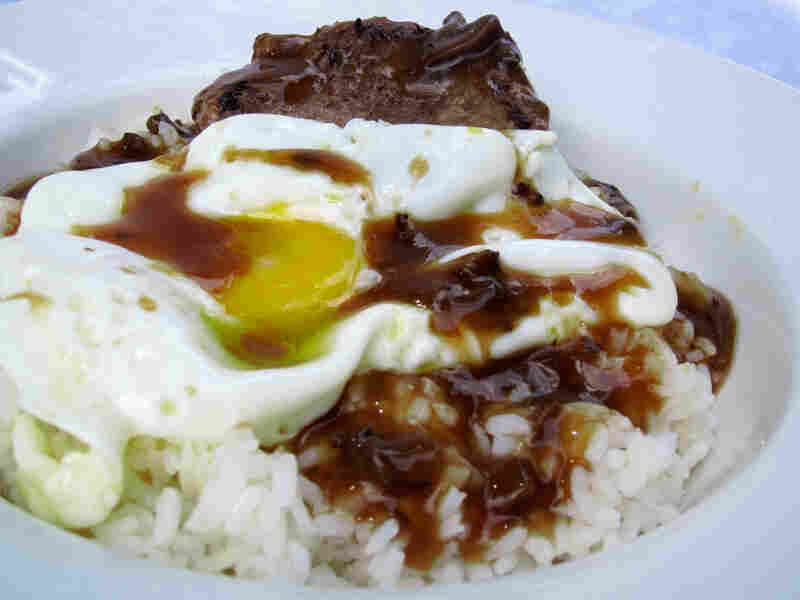 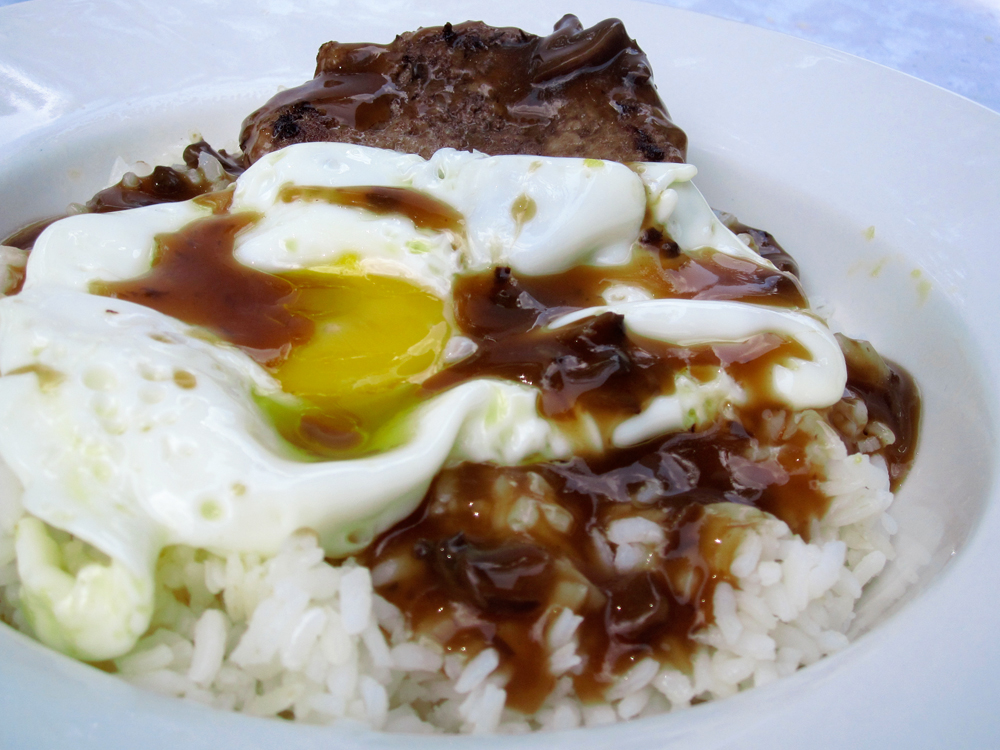 Cook the rice and keep it warm.

Fry the hamburger patty in a small nonstick pan. Remove and keep warm.

Wipe most but not all of the grease from the hamburger pan. Return the pan to medium-high heat, and cook the egg sunny side up or over easy.

Meanwhile, warm the gravy in a small saucepan or in the microwave.

To assemble, place the warm rice in a shallow bowl. Top with the hamburger patty. Top with the egg. Slather with gravy. Apply shoyu or chili pepper water to taste.

These tasty, no-fuss noodles are available all over Hawaii at places called "drive-ins," which are half-diner/half-coffee shop. Saimin is a common snack or late night (read: post-bar) meal. The best place to look for any items that seem obscure is an Asian market. 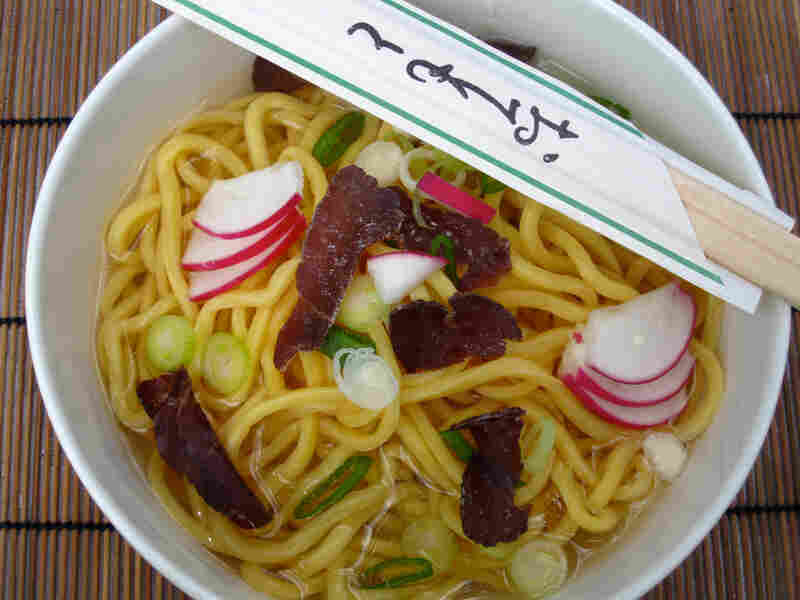 Warm the broth in a saucepan.

Cook the noodles according to the directions on the package. Drain noodles and place them in a deep bowl. Cover with the hot broth.

Add toppings. Eat with a Chinese ceramic spoon and chopsticks. Drink any hard-to-spoon broth straight from the bowl.

This heavy, satisfying dessert is Hawaii's equivalent of the brownie, found everywhere from bake sales to lunch wagons. This recipe is adapted from The Food of Paradise by Rachel Laudan (University of Hawaii Press 1996). 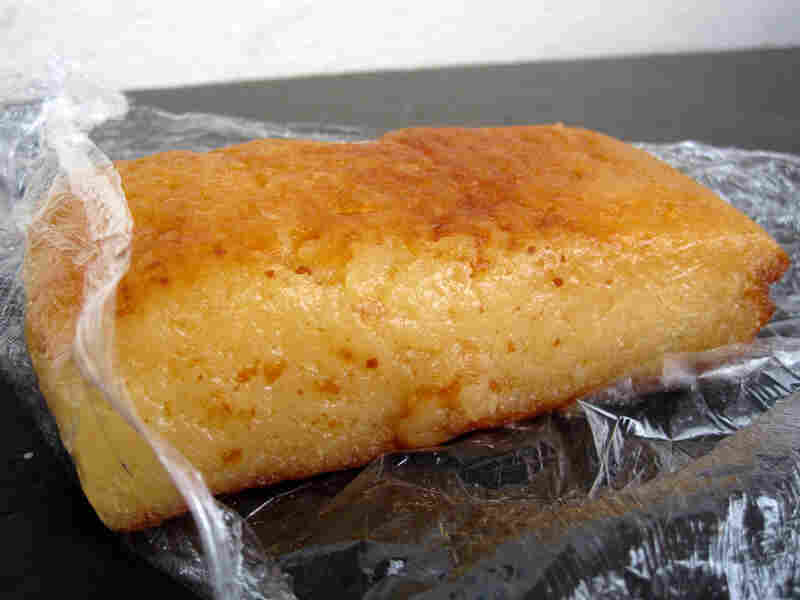 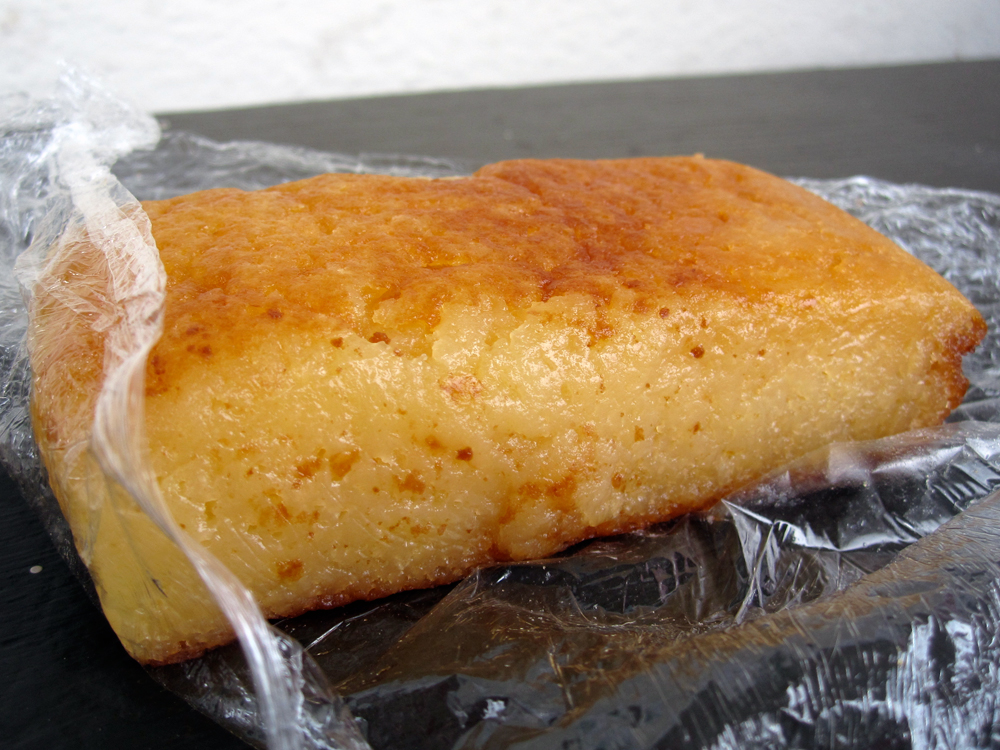 Combine the mochiko, sugar and baking powder in a medium-sized bowl and set aside.

In a large bowl, combine the coconut milk, eggs, butter and vanilla, and whisk until incorporated. Gently stir in the dry ingredients until thoroughly combined.