Accessibility links
High-Tech Aging: Tracking Seniors' Every Move A growing number of companies are using monitoring technology to revolutionize elder care. Sensors can transmit someone's every move -- from getting out of bed to making a pot of coffee and opening the refrigerator door. But what do seniors give up in privacy? 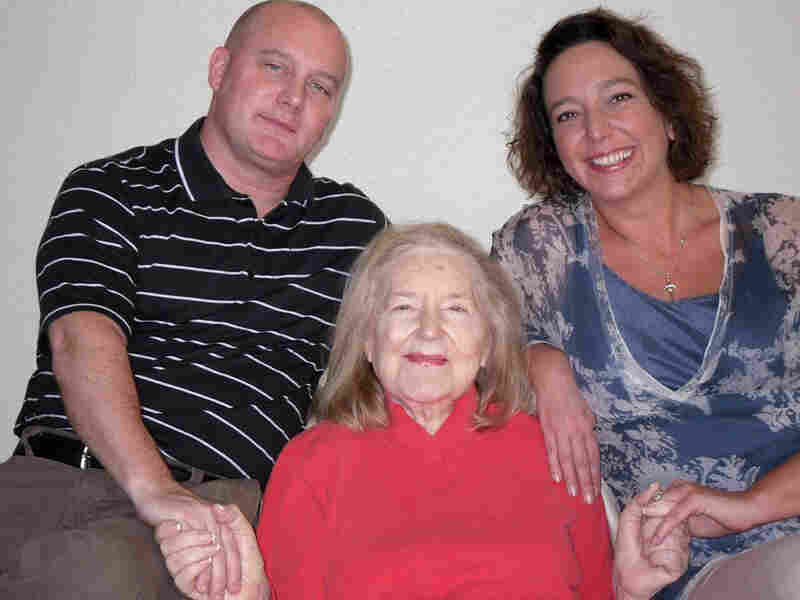 Lida and Chris Bridgers (at right and left) created Adaptive Home, an elder care monitoring system that uses sensors to track movement around a home. Their company grew out of their own need to monitor Lida's mother, Flora Roberts (center), after a stroke. Courtesy of the Bridgers family hide caption 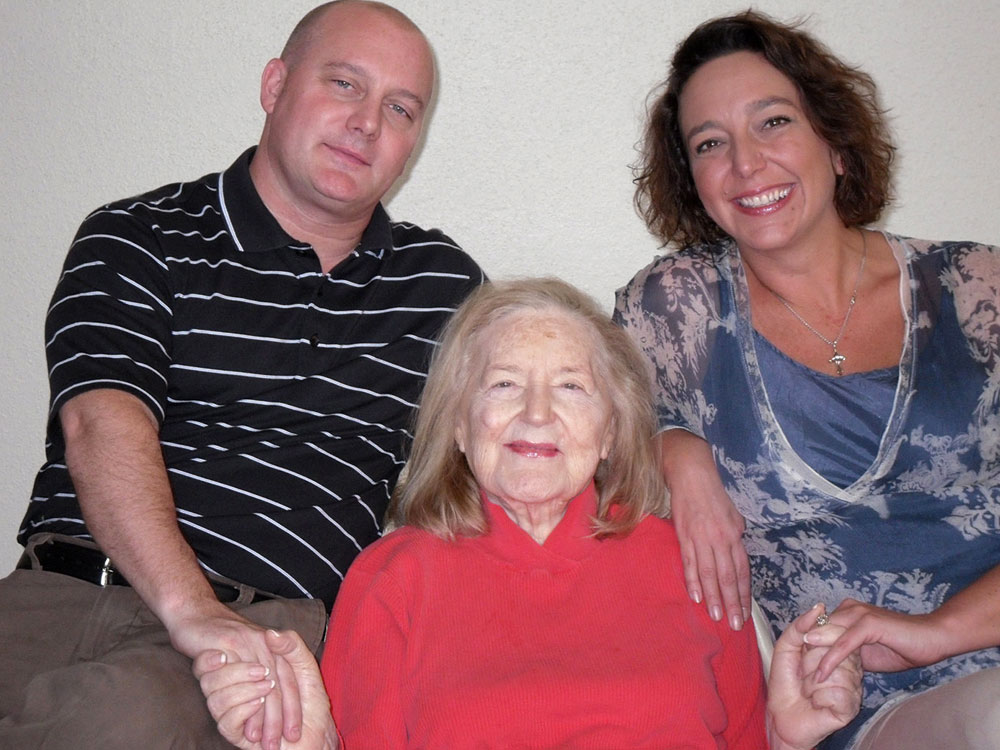 Lida and Chris Bridgers (at right and left) created Adaptive Home, an elder care monitoring system that uses sensors to track movement around a home. Their company grew out of their own need to monitor Lida's mother, Flora Roberts (center), after a stroke.

Courtesy of the Bridgers family

Part two in a four-part series

When Lida Lee Bridgers' mother had a stroke a few years back, Bridgers and her husband moved in with her in Austin, Texas. But that left them house-bound.

"She was not very steady on her feet," Bridgers says, "and doing the surfing-the-furniture type thing. And so we were real reluctant to leave her alone."

Bridgers' husband, Chris, was in IT, so he set up some motion sensors around their home and linked them to a computer. They were worried about a fall, especially in the bathroom.

"If she was in the bathroom more than 30 minutes, it would send a text message on our cell phone," Lida Bridgers says.

From that, a business grew. This year, the couple launched Adaptive Home, one of a growing number of startups that use monitoring technology to revolutionize elder care. These companies are also betting on a big market as the baby boomers enter old age.

Chris Bridgers says a basic package includes about a dozen motion sensors placed strategically around a house. They can provide adult children with a stunningly detailed rundown of a parent's day.

"They may know that their mother got up in the morning, that she's been to the kitchen, she's opened the refrigerator, she's taken her medicine," he says.

The sensors can even note when Mom makes her coffee and sits in her favorite chair. The idea is to alert children with a phone call or text message when anything unusual happens.

Lida Bridgers says triggers are based on a client's routine, but sometimes it takes a few adjustments to sort this out. Some clients, for example, insist they're sound asleep all night.

"Come to find out, they're out of bed for two hours at night," she says with a laugh. "They're in the kitchen, the bathroom -- the refrigerator was open three times. The kids don't need alerts because Grandpa wants a glass of milk!"

"Well, it's frightening to me. It's like Orwell," says Nancy Schlossberg, a counseling psychologist who focuses on seniors in transition. She wonders if all of this monitoring really means it's time to consider assisted living. But, if a family goes the high-tech route, Schlossberg hopes they ask Mom and Dad first.

"It is really important not to feel marginalized, not to feel degraded because you are old," Schlossberg says. "So, if the technology can make you feel good about yourself, that's fine. If it is a way of looking at you, inspecting you, then it isn't so good." 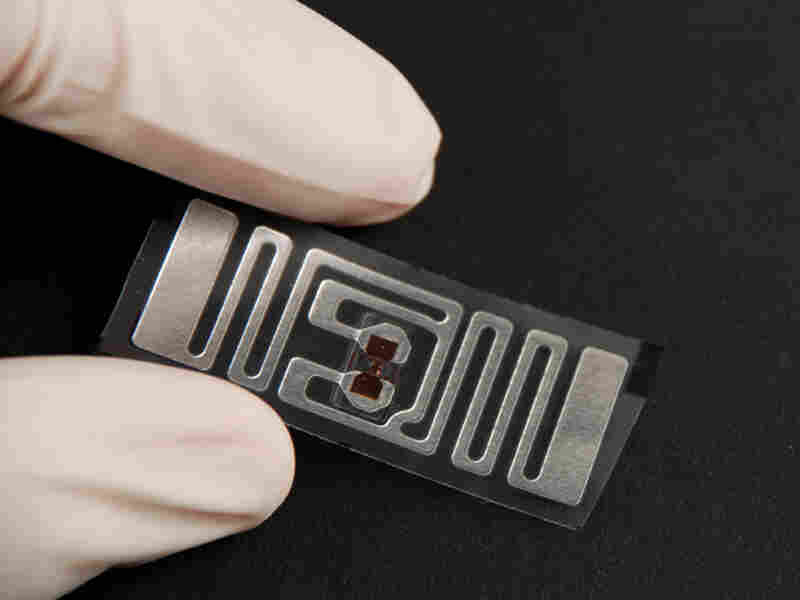 The AgeLab at MIT uses radio frequency tags like this one to monitor, say, when people pick up a pill bottle or where they left their eyeglasses. albln/iStockphoto.com hide caption 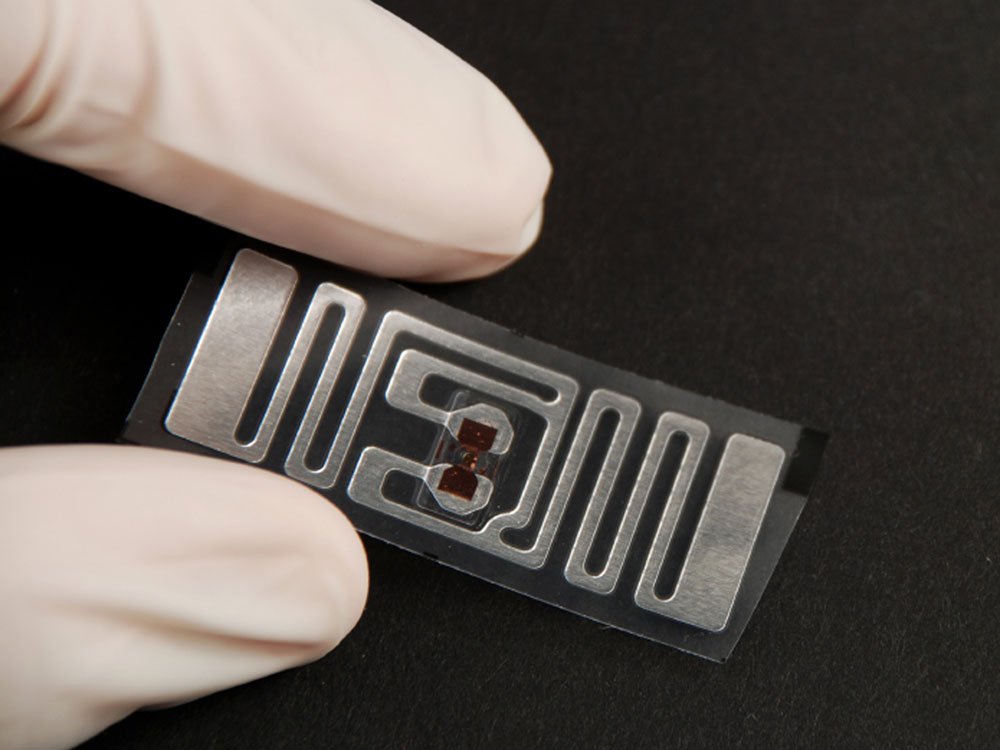 The AgeLab at MIT uses radio frequency tags like this one to monitor, say, when people pick up a pill bottle or where they left their eyeglasses.

The Bridgers insist their technology does improve quality of life, especially if it keeps seniors out of a nursing home a few more months or years. The computer that comes with the system also includes a scheduling program to help family coordinate care-giving, and -- a favorite with clients -- an easy way for seniors to receive family photos.

Across the country, research labs are coming up with all kinds of new things to monitor. At the AgeLab at MIT, Joe Coughlin is deploying the same technology NASA uses to track supplies in the space station.

"You can go on to a Web browser and find out exactly what is in Mom's kitchen, or what medication has been taken or not taken," he says.

The key is tiny radio frequency tags, which Earth-bound retailers already use for inventory. These would signal when a parent picked up, say, a particular bottle of medicine.

Of course that doesn't mean Dad actually took those pills, so Coughlin is developing a Smart Trash Can to track the pill bottles as they're thrown out. He says this technology could also monitor whether Mom is eating enough good meals, since nutrition is a common problem for elderly people living alone.

"There are even electric sensors that can measure how much pressure did you apply to the toothbrush when you brushed your teeth," de Weck says.

Does this sound like way too much information-sharing? For some, no doubt. But Coughlin says it can help get beyond simply reacting to a crisis.

"Where we're moving is predictive," he says. "A change in your walk, a change in the time you've made coffee or tea, may indicate that you're not feeling well. So the idea is to be able to intervene before you fall, before you have an issue."

And that, Coughlin says, can help keep a loved one on their own even longer.

Learn More About The Technology Behind Aging At Home