Accessibility links
Foreign Policy: Cooperating With The Taliban In recent months, humanitarian groups in Afghanistan have begun to cooperate much more closely with the Taliban to deliver their services. April Rabkin of Foreign Policy asks if that's a bad thing. 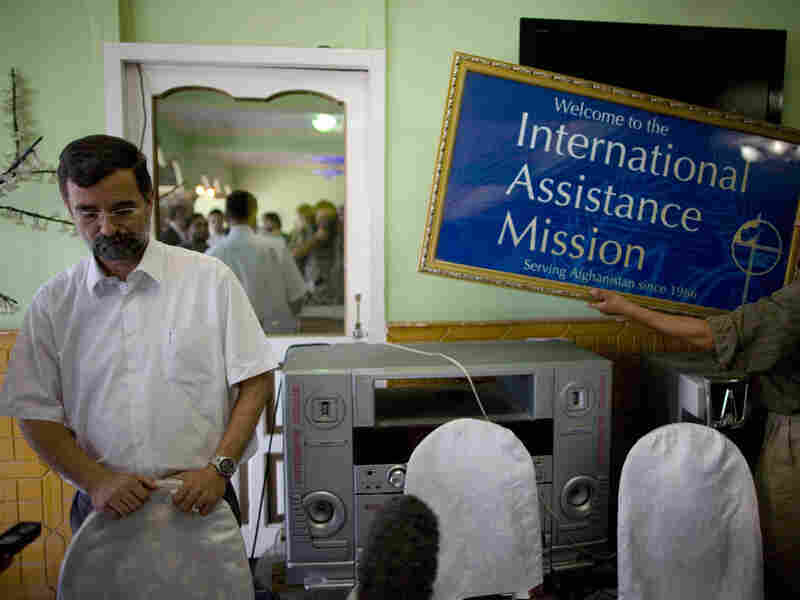 Dirk Frans, director of the International Assistance Mission, says the organization has no plans to leave Afghanistan despite the murders of 10 members of its team. Rodrigo Abd/AP hide caption 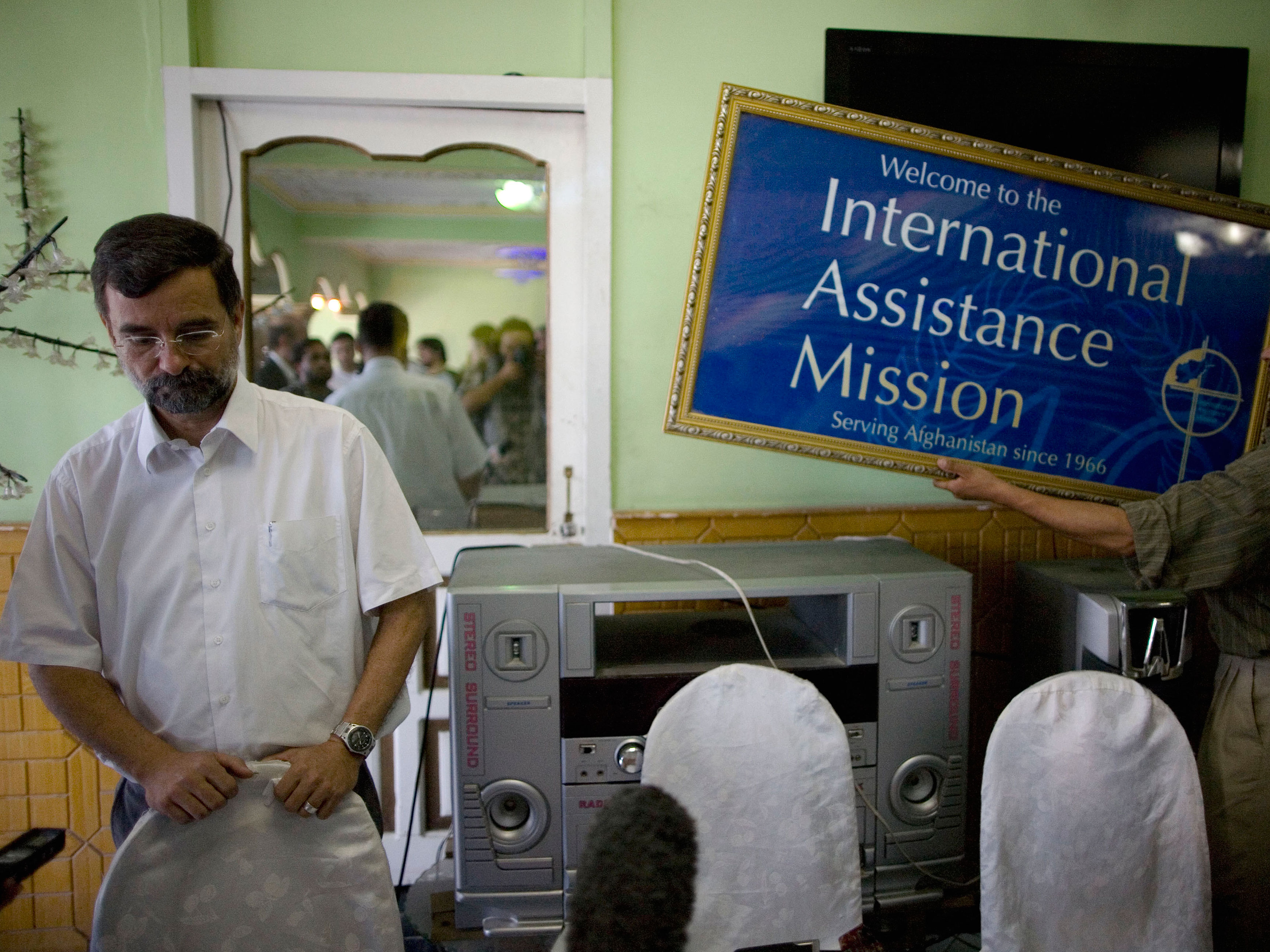 Dirk Frans, director of the International Assistance Mission, says the organization has no plans to leave Afghanistan despite the murders of 10 members of its team.

April Rabkin is a freelance journalist in Afghanistan.

It was a shock to everyone when 10 aid workers were killed in Afghanistan's remote Badakshan Province earlier this month. The Taliban claimed responsibility, reporters catalogued the victims' work, and expats across the country felt a shiver. But what surprised the humanitarian groups here most was that it happened at a time when all other signs were pointing in the opposite direction: Recent months have seen increasing cooperation between the Taliban and humanitarian groups and fewer targeted killings of aid workers.

Humanitarian groups have always had to strike a delicate balance of distance and cooperation with the Taliban. Aid workers provide services in territory under militant control -- which is a fair amount of Afghanistan these days. Recently, however, that cooperation has grown even closer and more explicit; aid groups have held meetings with the Taliban to negotiate for their safety, even producing a written document of permission from the head of the Taliban, Mullah Omar, in one case.

Aid workers' safety has generally improved through the shield of agreements and understandings, even if the recent slaughter shows cracks in the armor. As Nic Lee, director of the Afghan NGO Safety Office, an organization that advises aid groups on security, told me, "There's not a [militant] campaign against NGOs." If anything, humanitarian groups are getting cozier with the Taliban.

The reason for the cooperation is to keep aid workers and their services safe, says Laurent Saillard, director of the Agency Coordinating Body for Afghan Relief. It's an uphill battle, he told me, with national NGO staff are kidnapped at a rate of "10, 15, 20 people" per week. "So you can guess [that] there are a lot of NGOs in contact with the Taliban," he said. The Taliban has largely opened the door to NGOs; whereas insurgents from abroad, including Iran, Chechnya, Saudi Arabia, and Uzbekistan have a "reputation [of being] much tougher when it comes to foreigners."

Well-known humanitarian groups such as Médicins Sans Frontières (MSF) have all negotiated for their protection. And recently, the relative strength and organization of the Taliban has made it an easier task. Michiel Hofman, the organization's country representative, met face to face with Taliban commanders in the chain of command between March and May 2009 in order to re-establish the organization's presence in Afghanistan, he told me in an interview. MSF had pulled out of Afghanistan after five of its own employees were murdered in 2004. "The [Taliban] chain of command is more coherent in 2010 than 2004. It was much more fragmented then. That's why it's easier to establish these agreements." What exactly the agreement says is confidential, but what's clear is that MSF now has access to operate in Taliban controlled areas so long as its employees are clearly differentiated from NATO troops. Today, all MSF workers wear clearly marked vests with the group's insignia, front and back.

Equally strange bedfellows are now working in southern and eastern Afghanistan on a polio vaccination campaign. The effort is led by Unicef and the World Health Organization -- with the cooperation of both the Taliban and President Hamid Karzai's central government. For much of recent memory, Afghanistan was a country where polio vaccination was seen by clerics as a conspiracy to poison or sterilize Muslim children. Now, volunteers carry a letter of approval with Mullah Omar, the supreme leader of the Taliban, as a signatory, the Wall Street Journal reported last January. The International Committee of the Red Cross acted as a go-between to negotiate, its spokesman, Bijan Frederic Farnoudi told me. The Journal story makes clear that the collaboration runs deep: "Red Cross workers coordinate with the Taliban almost daily their movement through insurgent-dominated areas. And the organization has established channels of communication that allow it to receive responses on requests sent to the Taliban's senior leadership within hours."

Aid organizations strive to remain neutral, believing that their ability to deliver help will depend upon their ability to avoid being seen as partisan in any way. And that means talking to everyone, even the worst of the worst.

The International Assistance Mission (IAM), the organization whose workers were killed last week, has taken a different approach, negotiating mainly with local authorities and village elders, says director Dirk Frans. The IAM has been in Afghanistan since 1966, and the group has honed its strategy over the years. "When mujahedeen were fighting over Kabul [in the 1990s,] part of the town with the eye hospital was under one commander, but [hospital] staff lived under another commander. The mujahedeen agreed that, for a certain part of the day, there would be no fighting so that we could go from one section of town to another," recalled Frans. "We worked here when the king was in power, and when the Russians were in power ... then the mujahedeen, then the Taliban. Whoever is in control, that's [who] we relate to." What went wrong in Badakshan Province wasn't the IAM's local strategy; it was a local change of power. The area fell from NATO to Taliban control in late July, and it was right around that time that the aid workers showed up. With a new boss in town and old alliances in freefall, "They were in the wrong place at the wrong time."

Yet long before the recent tragedy, not everyone was pleased with the working relationship between aid groups and the Taliban. The quandary is the same one hashed out in conflict zones the world over: Aid organizations strive to remain neutral, believing that their ability to deliver help will depend upon their ability to avoid being seen as partisan in any way. And that means talking to everyone, even the worst of the worst.

In April 2010, the Karzai administration offered its clearest indication yet that it wasn't so fond of the arrangement. The government charged against a handful of Italian and Afghan employees of the Italian aid organization Emergency, which ran a hospital in Helmand, with carrying out "terrorist activities," killing civilians in its hospitals, and plotting to assassinate the governor. The charges have since been dropped, but some suspected the real reason for the case was something else entirely. In 2007, the group negotiated a deal with the Taliban for the release of a foreign journalist. The reporter's Afghan translator was killed.

The international coalition isn't thrilled with the agreements, either. The U.S. military and the German military, for example, have put conditions on grants that they offer to aid organizations, requiring them to work closely with the troops. The Catholic aid organization Caritas recently refused to cooperate with the German army's reconstruction efforts precisely because of those conditions, even though it could have won a piece of more than $12.9 million worth of aid.

Caritas and other aid groups have expressed concern that associating too closely with the international forces' attempts to "win hearts and minds" will put them in the same category as the military -- partisan and insecure. Already, aid groups have to fight to differentiate themselves from foreign troops. "When I speak to the Taliban I explain that I also meet with the U.S. military command and vice versa," Hofman explained. "Nobody is opposed to $4 million of medicine carried into their territory. But when you say you need expatriate staff monitoring it all the way to the patient... it can be difficult to convince the local commander that these are different foreigners [from the troops]."

Among hundreds of NGOs operating in Afghanistan, most negotiation with the Taliban is informal and indirect, "not at a high level with high-ranking Taliban," Saillard said. "It doesn't work all the time. But when it works, it's because the NGO has a good reputation, and the community supports the work."

If anything the IAM massacre will simply draw aid workers and the Taliban closer together. Aid groups here are drawing the lesson that communication with insurgents must be local and continuous. That will mean more agreements, more discussions, and more communication, not less. "Things rapidly change on the ground." said Frans. "You think you have an agreement, but things change."