Accessibility links
Can U.S. Take The Heat Of Canada's Oil Practices? Canada, the largest supplier of oil to the United States, is relying more heavily on controversial techniques to extract crude from its oil sands deposits. One of the methods includes pumping 500-degree steam underground to melt the oil and force it to percolate to the surface. 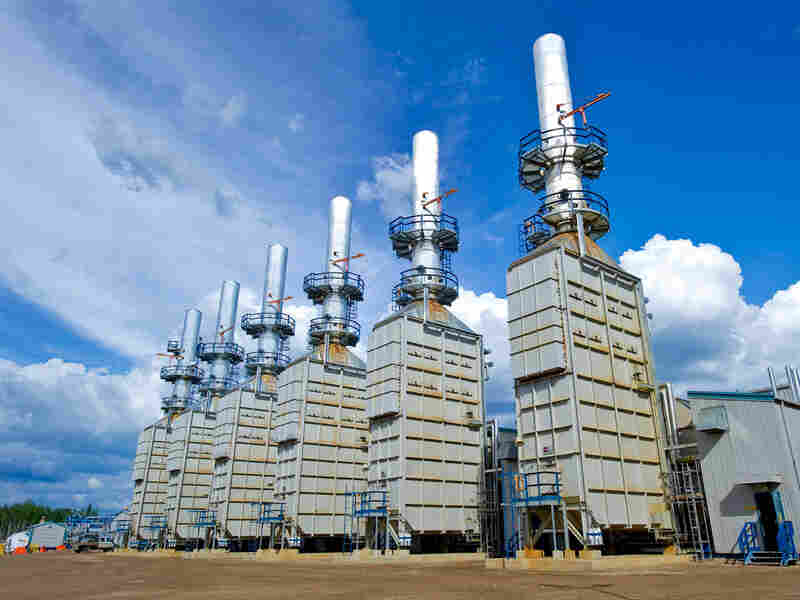 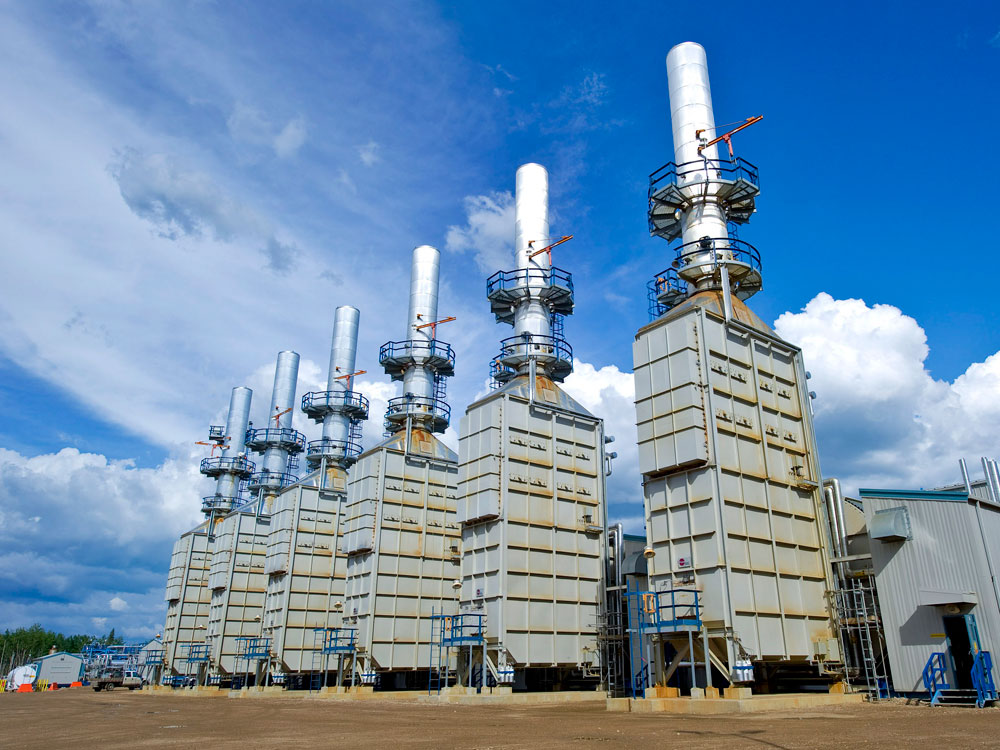 The BP spill left Americans with lingering questions about where their oil comes from -- and the ever-greater lengths to which the industry goes to find it. Canada, America's biggest foreign supplier, has been changing its production methods to meet demand, even while easily accessed oil is disappearing. But environmentalists have raised concerns over the impact of Canada's latest trend in oil extraction.

On hot days, Fort McMurray, Alberta, can smell like hot asphalt. The distinctive aroma comes from the vast oil sands mines that dot this region of boreal forests and muskeg. Oil sands -- also called "tar sands" -- are the vast natural deposits of bitumen, mixed into the local soil.

"Different winds, different smells," Raymond Cardinal says. "A lot of people use the phrase, 'the smell of money.' "

Since the 1960s, energy companies have been digging open-pit mines to get at the sand. The holes are huge; Cardinal, who worked in the mines for 20 years, figures it takes half an hour to drive around some of them.

Everything about the oil sands is huge. The electric shovels are several stories high; the dump trucks weigh 400 tons, and the upgrading facilities that turn the oil sands into usable petroleum dominate the landscape.

Heated water from the Athabasca River is used to separate the oil from the sand. It can take up to four barrels of water to produce one barrel of oil. After the process, the water is too dirty to go back in the river, and it's stored in vast "tailings ponds," which can be as big as the mines. The oil companies use cannons and scarecrows to keep migrating birds off the water, but the system sometimes fails; in April 2008, 1,600 ducks died after landing in a tailings pond run by a company called Syncrude. 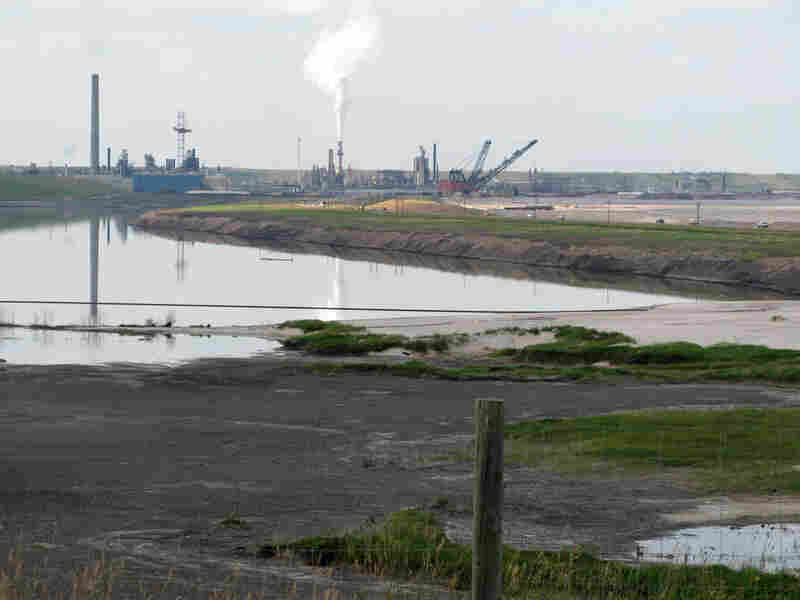 A tailings pond next to an upgrading facility for an old pit mine in Alberta, Canada. Martin Kaste/NPR hide caption 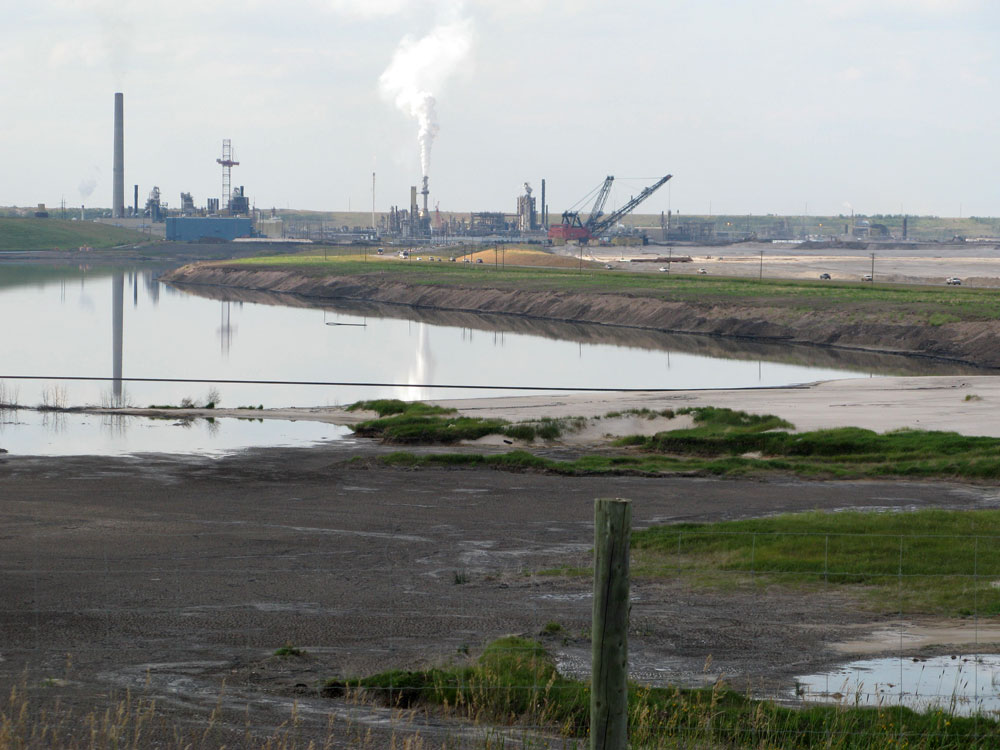 A tailings pond next to an upgrading facility for an old pit mine in Alberta, Canada.

The companies put a lot of effort into trying to restore the landscape. Spent mines are filled in, and the companies replant a version of the original forest. Cardinal is a native of northwestern Alberta -- he belongs to the Athabascan-Chipewyan tribe -- and he says the reclaimed lands look good. But he doesn't consider them natural.

He seems to regret his years working in the oil sands mines.

"It was hard, because you saw what they were doing to the landscape," he says.

The pit mines may become a thing of the past. Canada's oil sands reserves cover an area roughly equivalent to North Carolina, but most of it is too deep to dig up. To get the deeper oil sands, the Canadians are switching to newer techniques, such as steam-assisted gravity drainage.

Greg Fagnan of Cenovus Energy shows off the technology in a forest clearing in Eastern Alberta. In the middle of the clearing, a series of pipes sends 500-degree steam down into the ground.

"Think about an 800-meter straw," Fagnan says. That straw is sending the steam through the tarry oil sands, deep underground, melting it and sending it back to the surface in what Fagnan calls a kind of "percolation."

The melted bitumen and the steam are pumped to the surface, and more pipes send it through the forest to a central separation tank, where the oil and water part ways.

The company reuses the water, and the oil is sent to market.

This steam process is what the engineers call in situ oil sands production, meaning the bitumen is removed while leaving the soil in place. All together, the various forms of in situ production are on track to eclipse open-pit mining in Alberta, perhaps by the middle of the decade. Supporters say that's good news, because these methods do less harm to the landscape.

But there are drawbacks. Environmentalists say the roads and the network of steam and oil pipes can fragment the ecosystem of Canada's pristine boreal forests, getting in the way of migrating species such as caribou.

And then there's global warming. Oil companies burn vast amounts of natural gas to boil the water to steam the oil sands. At its Christina Lake facility, Cenovus uses about 750 cubic feet of natural gas for every barrel of oil it steams out of the ground.

In oil sands production, in situ techniques are projected to surpass pit mining. In situ methods are used to get the oil that open pit mining can't reach. Supporters of in situ methods say it will preserve the landscape more than pit mining, but environmentalists say it will upset the ecosystem and contribute to global warming.

"Some people have described this as a kind of reverse alchemy," says Simon Dyer, oil sands director at the Pembina Institute, an environmental think tank. "You're taking a relatively clean-burning energy in natural gas and using it to create a much dirtier source of energy."

Christina Lake is one of the more fuel-efficient operations in Alberta, and Cenovus is experimenting with techniques to generate the necessary steam using less natural gas. Dyer acknowledges there have been improvements, but he says the companies aren't solving the larger problem.

"Virtually every environmental indicator is actually worsening, in a cumulative sense, because those per-barrel improvements are being washed away by the increase in production."

And production will keep increasing. The oil reserves contained in those Alberta sands are estimated at 170 billion barrels of bitumen. From the U.S. point of view, that's a couple of decades worth of oil, conveniently located on the territory of our friendly northern neighbor.

But getting at those reserves will require steam, or some other high-energy method. Cenovus Vice President David Goldie says that's just the new reality.

"The age of easy oil is over," Goldie says. "Fields are depleted, and we're going after the harder-to-get oil, and having to use technology to figure out how to get it out of the ground."

And at Christina Lake, Cenovus is planning for the long term. It's building new facilities designed to last 30 years, including big new storage tanks, where oil that's been steamed out of the Canadian wilderness will be stored before being fed into the new network of pipelines that's being built to refineries in the United States.