Accessibility links
Last U.S. Combat Brigade Leaves Iraq Through Kuwait But some 50,000 troops will stay another year in an advisory role and could still see action. President Obama had set an Aug. 31 deadline for ending U.S. combat operations in Iraq, though the last brigade crossed the border from Iraq into Kuwait early Thursday. 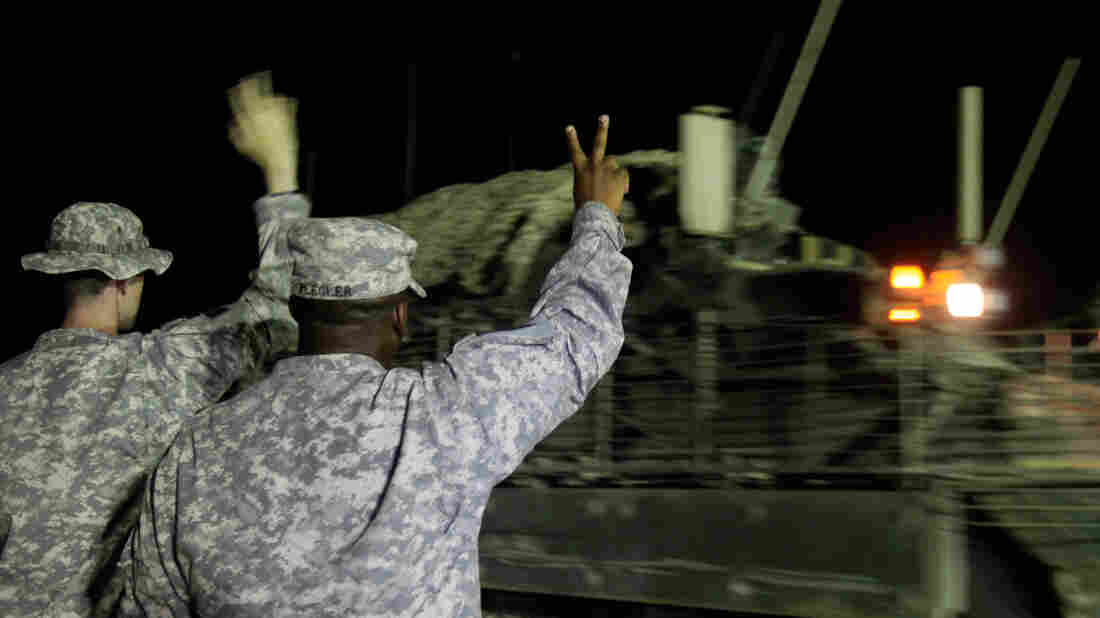 U.S. Army Sgt. Jason Thompson (left) and Lt. Col. Nate Flegler wave to one of the last Stryker armored vehicles to leave Iraq as it crosses the border into Kuwait at the Khabari border crossing. Maya Alleruzzo/AP hide caption 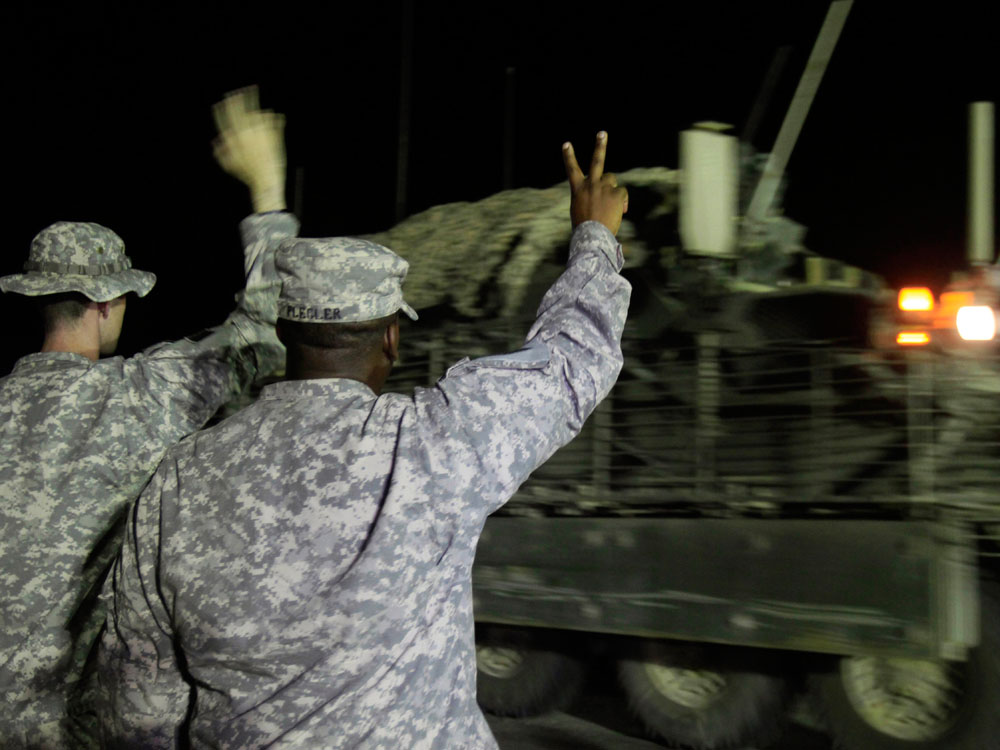 U.S. Army Sgt. Jason Thompson (left) and Lt. Col. Nate Flegler wave to one of the last Stryker armored vehicles to leave Iraq as it crosses the border into Kuwait at the Khabari border crossing.

Seven years and five months after the U.S.-led invasion, the convoy of combat troops from the 4th Stryker Brigade, 2nd Infantry Division, lumbered across the Iraq-Kuwait border before dawn, with a few hundred members staying behind to wrap up administrative and logistical duties. They will fly out of Baghdad later Thursday.

The departure doesn't mark the end of the U.S. military presence, however: About 50,000 troops will remain in Iraq through the end of next year. The troops are officially there in an advisory role, but will carry weapons to defend themselves and will join Iraqi troops on missions if requested.

"Part of our mission will be to continue to train, coordinate, advise and assist" Iraqi forces, Army Maj. Gen. Stephen Lanza said Thursday on CBS' The Early Show.

Marine Reserve Capt. Peter Brooks, who served two tours in Iraq from 2007-'09, told NPR that many veterans of the long and often frustrating conflict feel a "quiet pride" that their mission has been accomplished and that Iraqi forces "by and large are ready to take over the security role.

"It feels good that we left our partners and allies who were ready and capable to take over. It's nice to know, too, that the last Americans to leave Iraq won't be fleeing on a helicopter from the roof of the embassy," Brooks said, referring to the chaotic final days of the U.S. military presence in Vietnam.

But he acknowledged that the U.S. death toll in Iraq -- at least 4,415 by Pentagon count as of Wednesday -- may not yet be final.

" 'Combat operations' is sort of a relative term," he said. "I think some troops who remain after this date are going to see things that look kind of like combat."

When 18-year-old Spc. Luke Dill first rolled into Iraq as part of the U.S. invasion, his Humvee was so vulnerable to bombs that the troops lined its floor with flak jackets.

Now 25 and a staff sergeant after two tours of duty, he rode out of Iraq this week in a Stryker, an eight-wheeled behemoth encrusted with armor and add-ons to ward off grenades and other projectiles.

"It's something I'm going to be proud of for the rest of my life -- the fact that I came in on the initial push and now I'm leaving with the last of the combat units," he said.

The 4th Stryker brigade, based in Joint Base Lewis-McChord in Washington state and named for the vehicle that delivers troops into and out of battle, lost 34 members in Iraq. It was at the forefront of many of the fiercest battles, including operations in eastern Baghdad and Diyala province, an epicenter of the insurgency, during "the surge" of 2007.

The brigade's leadership volunteered to have half of its 4,000 soldiers depart overland instead of taking the traditional flight out, a decision that allowed the unit to keep 360 Strykers in the country for an extra three weeks. The remainder of the brigade flew out with the last of the troops slated to leave later Thursday.

U.S. commanders say it was the brigade's idea to drive out, not an order from on high. The intent was to keep additional firepower handy through the "period of angst" that followed Iraq's inconclusive March 7 election, said brigade chief, Col. John Norris.

It took months of preparation to move the troops and armor across more than 300 miles of desert highway through potentially hostile territory.

"This is powerful. This is exciting for me. As a commander, this means that all of my soldiers are safely inside of Kuwait and getting ready to redeploy back to their families," Norris told The Associated Press.

Once out of Iraq, there was still work to be done. Vehicles had to be stripped of ammunition and spare tires, and eventually washed and packed for shipment home.

Political Situation 'Back To Square One'

Meanwhile, in the north, insurgents kept up a relentless campaign against the country's institutions and security forces, killing five Iraqi government employees in roadside bombings and other attacks Wednesday.

The violence -- coming a day after a suicide bomber killed 61 Iraqi army recruits in central Baghdad -- underscores the difficult path still ahead for Iraqis to create a functioning, stable society as the U.S. presence fades away.

Five months after national elections, squabbling political parties in Iraq are still at loggerheads over the formation of the country's next government.

The various factions held talks last week on a possible power-sharing deal, raising hopes and creating "a feeling that things are heading in the right direction," departing U.S. Ambassador Christopher Hill told NPR. But those hopes were quickly dashed when negotiations crumbled.

"In a lot of respects, we are back to square one," said Anthony Shadid, a Baghdad-based correspondent for The New York Times. "The landscape looks a lot like it did back in March after the election."

Shadid told NPR that "there's a very deep vein of disenchantment on the part of the public toward this paralysis, toward this deadlock, and a lot of anger over what people see as collapsing services -- no electricity, no water."

"We may be waiting weeks or even months before there is a government here," he said.

That uncertainty has fueled fears that the leadership vacuum leaves the country vulnerable to a renewal of sectarian violence that nearly brought it to the brink of civil war four years ago.

State Department spokesman P.J. Crowley told MSNBC on Wednesday that he didn't think it was the end of violence in Iraq.

"We're still in a transition," he said. "At this point, as you're seeing the pictures of the last combat forces leaving Iraq -- but, as you said, there are 50,000 troops behind -- they will still have a capability. They will still be working directly with Iraqi forces."