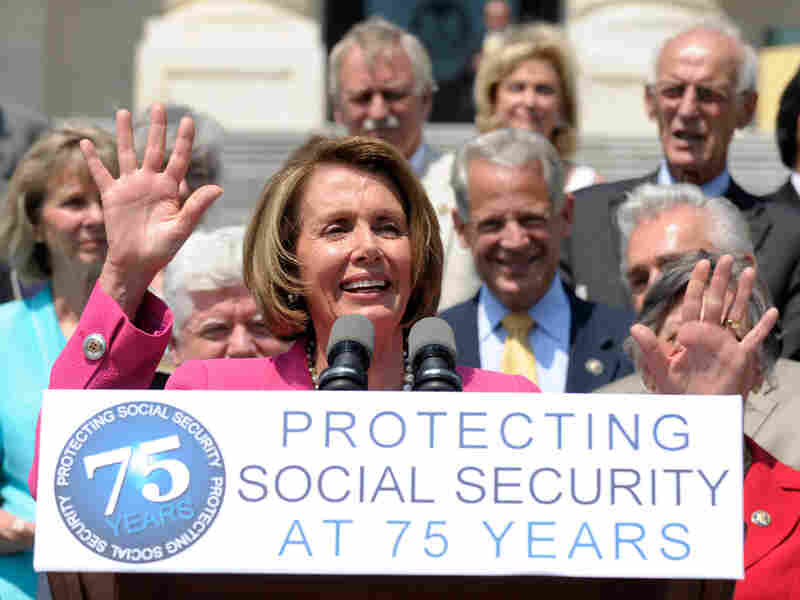 House Speaker Nancy Pelosi, speaks on the steps of Capitol Hill in Washington during an event marking the 75th anniversary of Social Security. There is no doubt that Social Security desperately needs reform. Susan Walsh/AP hide caption 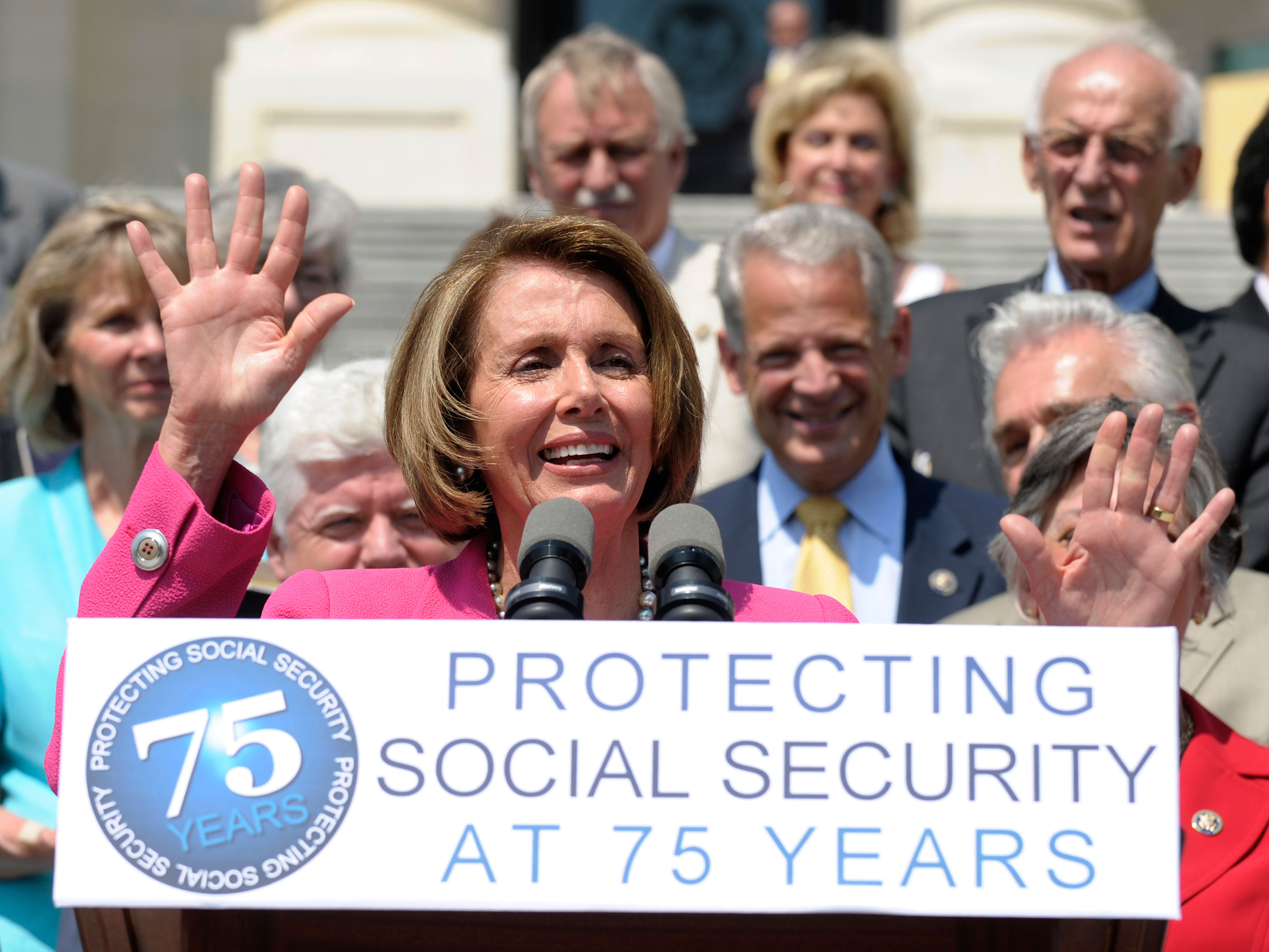 House Speaker Nancy Pelosi, speaks on the steps of Capitol Hill in Washington during an event marking the 75th anniversary of Social Security. There is no doubt that Social Security desperately needs reform.

Michael Tanner is a senior fellow at the Cato Institute and author of Leviathan on the Right: How Big-Government Conservatism Brought Down the Republican Revolution.

So, President Obama believes that Republican leaders are "pushing to make privatizing Social Security a key part of their legislative agenda if they win a majority in Congress this fall."

To which one responds, "If only!"

There is no doubt that Social Security desperately needs reform. Social Security is already running a temporary deficit, and that deficit will turn permanent in just five years. In theory, the Social Security Trust Fund will pay benefits until 2037. That's not much comfort to today's 35-year-olds, who will face a 27 percent cut in benefits unless the program is reformed before they retire. But even that figure is misleading, because the trust fund contains no actual assets. The government bonds it holds are simply IOUs, a measure of how much money the government owes the system. It says nothing about where the government will get the $2.6 trillion to pay off those IOUs.

Even if Congress can find a way to redeem the bonds, the trust-fund surplus will be completely exhausted by 2037. At that point, Social Security will have to rely solely on revenue from the payroll tax -- and that won't be sufficient to pay all the promised benefits. Overall, the amount the system has promised beyond what it can actually pay now totals $18.7 trillion.

Moreover, Social Security taxes are already so high, relative to benefits, that Social Security has simply become a bad deal for younger workers, providing a below-market rate of return. In fact, many young workers will end up paying more in taxes than they receive in benefits. And most important, workers have no ownership of their benefits. This means that they are left totally dependent on the goodwill of 535 politicians to determine what they'll receive in retirement.

Benefits are not inheritable, and the program is a barrier to wealth accumulation. Lower-income families, African-Americans, and working women suffer disproportionately.

But Republican leaders, battered by the failure of President Bush's reform initiative and years of Democratic demagoguery, show no signs of venturing back into this issue. In fact, the only senior Republican willing to support personal accounts these days appears to be Rep. Paul Ryan, who has included in his "roadmap" a plan to allow younger workers the option of investing slightly less than half of their Social Security taxes. However, it is telling that Ryan's roadmap has just 13 co-sponsors, none of whom are among the Republican leadership.

Given their large lead in current polls, it is perhaps understandable that Republicans don't want to risk offending voters, particularly seniors, by wading back into the Social Security thicket. But they are making a mistake.

From a purely political standpoint, if Republicans think that remaining silent on the issue will protect them from Democratic attacks, they are the stupid party indeed. The president's comments should serve clear notice that Democrats are not going to let a simple thing like Republicans' actual position to get in the way of a good political weapon. Senate Majority Leader Harry Reid has run television ads attacking his opponent, Sharron Angle, for wanting "to wipe the program out," even though she's made clear she wants to keep it. In Kentucky, Republican senatorial candidate Rand Paul is being criticized for remarks he made in favor of Social Security privatization -- in 1998. There isn't any escape.

Even worse, as a matter of policy, by taking personal accounts off the table, Republicans may be boxing themselves into a very bad corner. There are, after all, only three options for Social Security reform: raise taxes, cut benefits, or switch to personal accounts. While benefit cuts are defensible economically, they are not likely to prove any more politically popular than personal accounts, probably less so. Democrats are already organizing to fight any reductions. And, if Republican opposition to the Medicare cuts under Obamacare is any indication, no one should expect an overabundance of courage in fighting to cut Social Security benefits.

Therefore, if Republicans are not willing to embrace personal accounts, they will be left with . . . tax hikes, which has been the Democrats' goal all along.

One reason the Democrats have been so successful in expanding the government year after year is that they have the courage of their convictions. They lose on an issue time after time, but they keep coming back until they win. Take national health care: After Hillarycare went down to defeat in 1993, the Left didn't give up. And today we have Obamacare. Republicans lost on Social Security and curled up into a fetal position, begging for mercy.

Factcheck.org rates the president's statement that Republicans want to privatize Social Security as "mostly false." Before too long, we may come to wish that this time he had been telling the truth.