Accessibility links
In Tenn., Mosque Location Isn't The Issue: Religion Is A proposal for a new Islamic center near Nashville, Tenn., has brought opponents and advocates into the streets -- far from ground zero. Some fear the center will breed extremism. Others advocate for the building as an example of religious freedom. 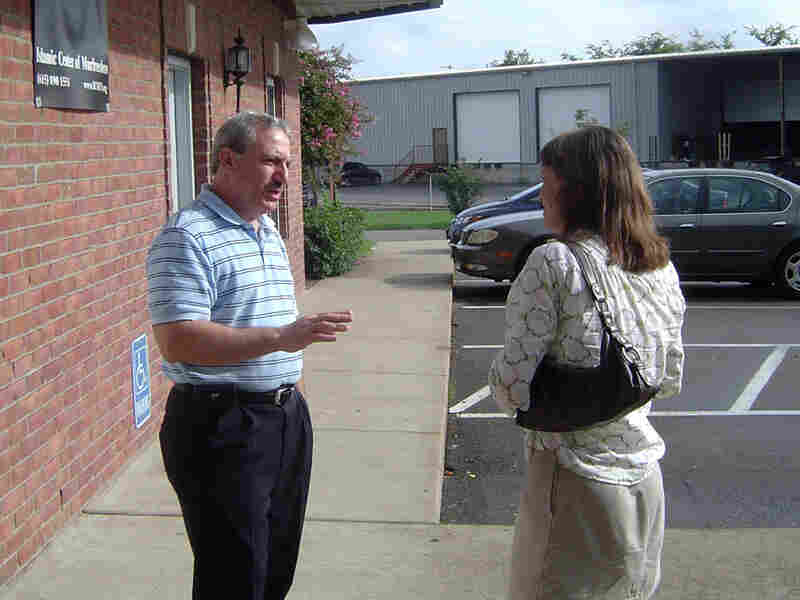 Mosque spokesman Saleh Sbenaty (left) answers questions from Tanzi Webb, who feels following the Quran to the letter leads to extremism. Sbenaty's congregation is planning to build a new Islamic center in Murfreesboro, Tenn., but has faced opposition from people who fear the center will breed extremism. Blake Farmer for NPR hide caption 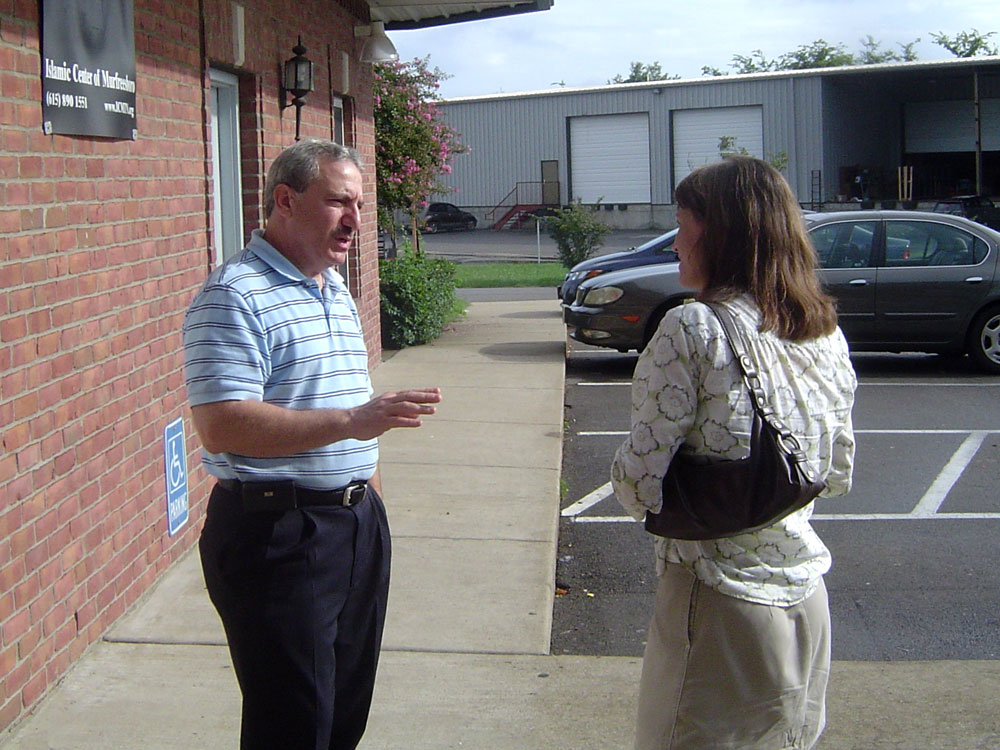 Mosque spokesman Saleh Sbenaty (left) answers questions from Tanzi Webb, who feels following the Quran to the letter leads to extremism. Sbenaty's congregation is planning to build a new Islamic center in Murfreesboro, Tenn., but has faced opposition from people who fear the center will breed extremism.

Many of the opponents of a proposed Islamic center near the World Trade Center site have made the case that an Islamic center is fine -- just not there. But in other parts of the country, people are saying, "Not here, either." A new Islamic center is going up near Nashville, Tenn., and as in New York, the proposal has fractured the community along a divide over religious freedom.

Recently hundreds of protesters marched around the town square in Murfreesboro, Tenn. They carried signs that read, "Enough Is Enough" and "Stop Terrorism."

Another woman yelled out, "Have you forgotten the twin towers?"

What has these people so upset is a proposal to build what would eventually be a 52,000-square-foot Islamic center, complete with worship space, a cafeteria and even a pool.

There's already a small, inconspicuous mosque hidden in a complex of office suites behind a Quick Lube. But the congregation has outgrown the space.

The leader of the opposition has tried stopping construction with environmental and traffic concerns. But most of the people rallying against the mosque, like Ben Fletcher, have a different argument.

"We're Christians and this religion represents people that are against Christians. That's something we need to look at, you know, because you're going to have a lot of trouble down the line," Fletcher says.

He says he does not know exactly what trouble looks like, but he and others worry about terrorist links and Muslims wanting to impose Shariah (Islamic law).

Saleh Sbenaty, an engineering professor from Syria and a leader of the growing Muslim congregation, has lived in Tennessee for three decades, but he says he's never seen this level of Islamophobia.

"All of the sudden now ... there is a movement against Islam and Muslims," Sbenaty says. "We did not see that immediately after 9/11. And all of the sudden now it is part of politics and it is like ... 'I can get more votes if I can bash Islam more, Muslim[s] more.' "

The mosque debate has played out in state politics. The lieutenant governor had to back away from campaign statements suggesting Islam might be a cult. A candidate for Congress who was upfront about her suspicions of Muslims nearly won the Republican primary this month.

Voices From The Mosque

But in Murfreesboro there is also a substantial amount of support for the mosque, even among non-Muslims. In fact, many, like Allison Belt, are Christians themselves. "Anyone who has a religion that falls within the boundaries of our laws, such as the Muslim community here, should have access to a place to worship. They need more room. They need more space. I went to an open house at their place two weeks ago. It is crowded and hot," Belt says.

At least one opponent is trying to find out more about Islam. Tanzi Webb showed up at the existing mosque this week. She says she wanted to look its leaders in the eye and get some questions answered.

Webb arrived just before the afternoon call to prayer and was invited in. She slipped off her shoes and watched from the back. After seeing prayers, Webb spoke with the imam. She told him she's afraid following the Quran to the letter makes for extremists and terrorists. Afterward, she says the meeting didn't convince her otherwise.

"It did not put my mind at ease at all, but I tried to come in with a very open mind. I did not come in thinking this group is evil," Webb says. "My main thing is safety, safety, safety."

That's safety from violent extremism, she says. Webb says she has a long way to go before she can be comfortable with a big Islamic center, whether it's going to be next door or in New York City.