Accessibility links
What Does It Feel Like To Be 75? Say Goodbye To Spry Researchers at the MIT AgeLab developed bodysuit that simulates the strain and stiffness of the well lived-in body. They are using the suit to help 20-something engineers feel the aches and limitations of an average 75-year-old, so they can design better products for them. 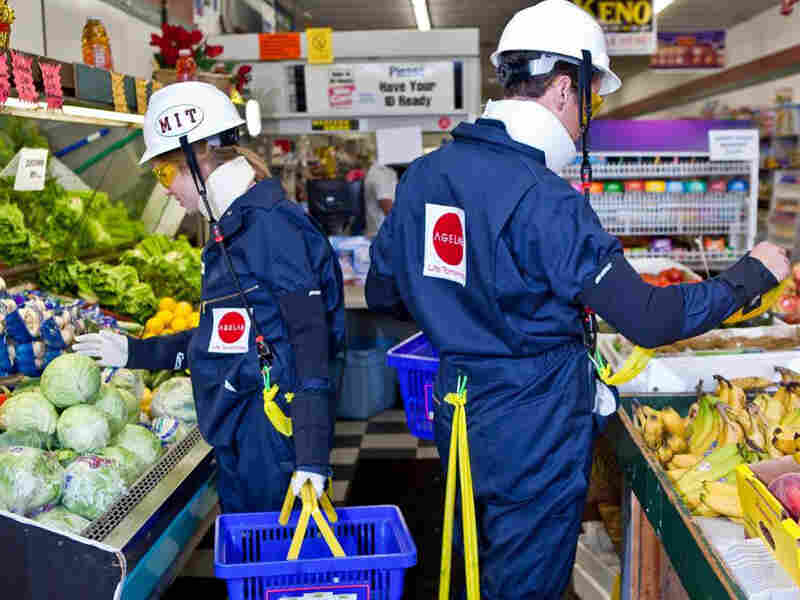 MIT researchers wore the Age Gain Now Empathy System -- a body suit and helmet -- to a grocery store to understand what struggles seniors might have while shopping. Courtesy of MIT's AgeLab hide caption 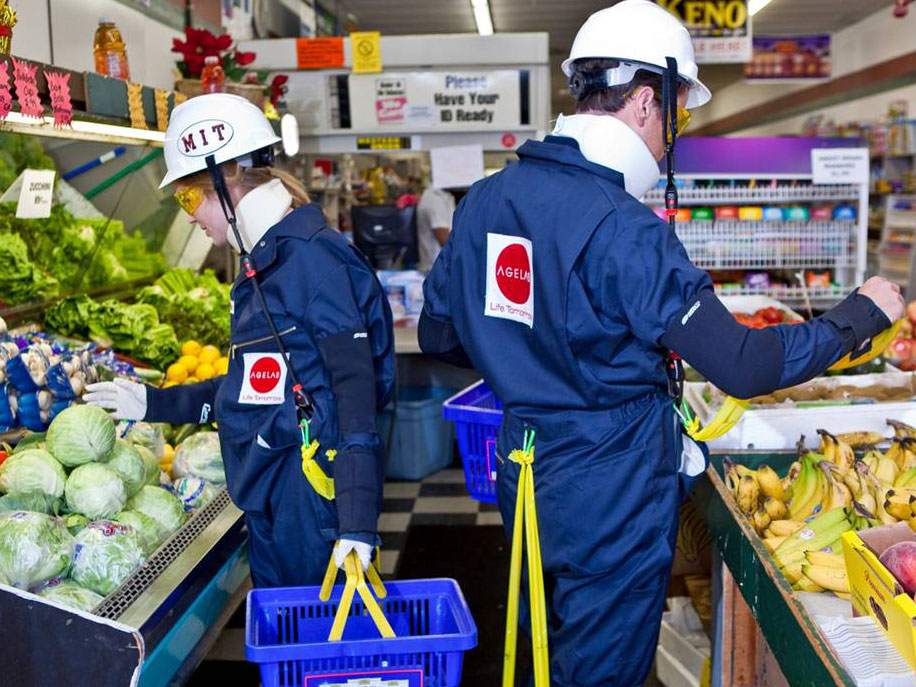 MIT researchers wore the Age Gain Now Empathy System -- a body suit and helmet -- to a grocery store to understand what struggles seniors might have while shopping.

While reporting my recent series on Aging At Home, I came across a special suit at the Massachusetts Institute of Technology AgeLab. It's meant to help 20-something engineers feel the aches and limitations of an average 75-year-old so they can design better products for them. Think of it as working like those outfits Superheroes put on, only backward. Of course, I couldn't resist.

Now, I'm 40-something -- no spring chicken. But if the crosswalk light is blinking, I can still dash across the street, no problem. Until, that is, MIT researcher Rozanne Puleo starts strapping me into what she calls her Age Gain Now Empathy System.

I pull a harness around my waist and Puleo starts attaching things to it. First, stretchy rubber bands connect from my waist to the bottom of my feet.

"It will limit your hip flexion," Puleo explains.

The act of having to balance makes you more fatigued.

That means no more sprinting. More stretchy bands restrict my arm movements. There are knee pads and Velcro wrist braces; rubber gloves to lessen sensation in my fingers; yellow goggles to limit my depth perception. Everything on the suit is carefully calibrated to mimic the loss of function that happens as we age.

Finally, Puleo fits me into a hard hat and attaches yet more things to that. And that's when this all starts to feel like a bad idea. It has become work simply to stand up straight. And to walk? Puleo has me in Crocs sandals, with bits of rubber foam taped to the bottom. I haven't exactly lost my balance, but it feels like I easily could.

MIT researchers say baby boomers, of course, aren't the first to get old. But Joseph Coughlin, the head of the AgeLab, says they're the first to say, "Wait a minute, there's gotta be a product, a service or something to make this better, easier, more convenient." 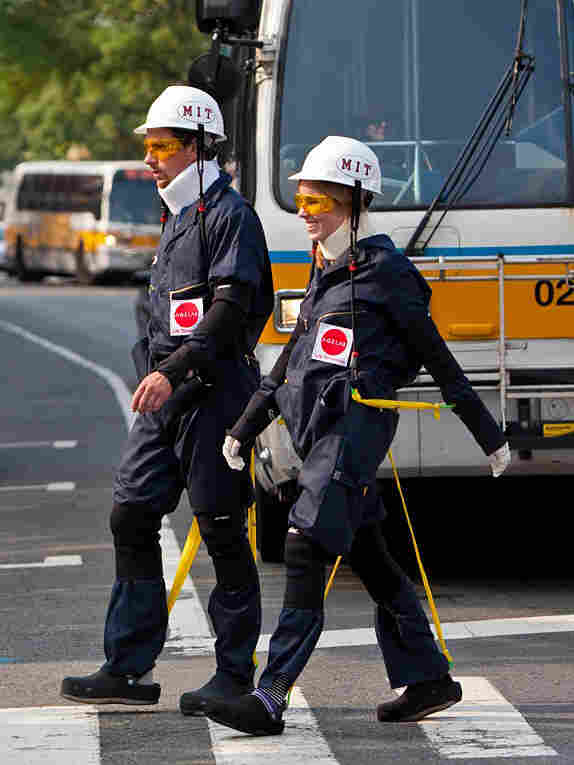 It's much harder to dash across the street in the suit. Courtesy of MIT's AgeLab hide caption

And that's the AgeLab's mission.

Puleo has outfitted graduate students in her age suit and taken them grocery shopping. Each had a list of typical items a senior might want.

"What we found," she says, "was a lot of the low-sugar, low-sodium items were either at the top of the shelf or the bottom of the shelf -- not in a place where an older adult would have the easiest time locating."

Sure enough, when I step over to the AgeLab's mock grocery store, that box of Ritz crackers sitting way up on the top shelf does not seem worth the trouble.

Coughlin says he wants to spread this kind of "aha moment," not just to grocery chains but also to product designers and city planners -- "The 'aha' for the 30-year-old that says, 'Wow this box of cupcakes is hard to open. Wow, getting out of this public transportation system is more difficult than I thought.'"

Puleo wants those who try on her suit to feel more empathy for seniors. I, for one, have come to appreciate that spring in my step while I still have it.