Accessibility links
Foreign Policy: Why Isn't Anyone Helping Pakistan? There is no shortage of theories as to why the most devastating natural disaster in recent memory has generated such a tepid response from the international community. Mosharraf Zaidi of Foreign Policy argues the main reason that Pakistan isn't receiving attention or aid proportionate to the devastation caused by these floods is because, well, it's Pakistan. 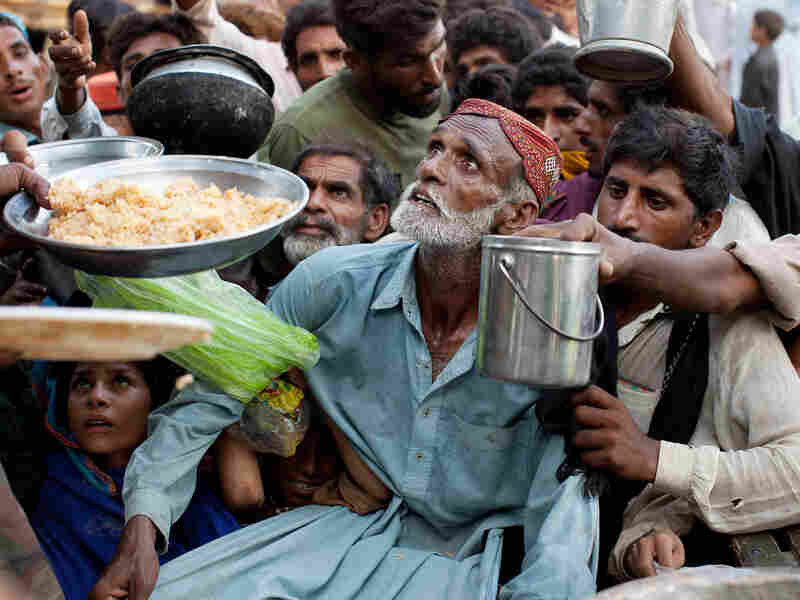 Desperate flood victims scramble for some food. The UN has described the disaster as unprecedented, with over a third of the country under water. Paula Bronstein/Getty Images hide caption 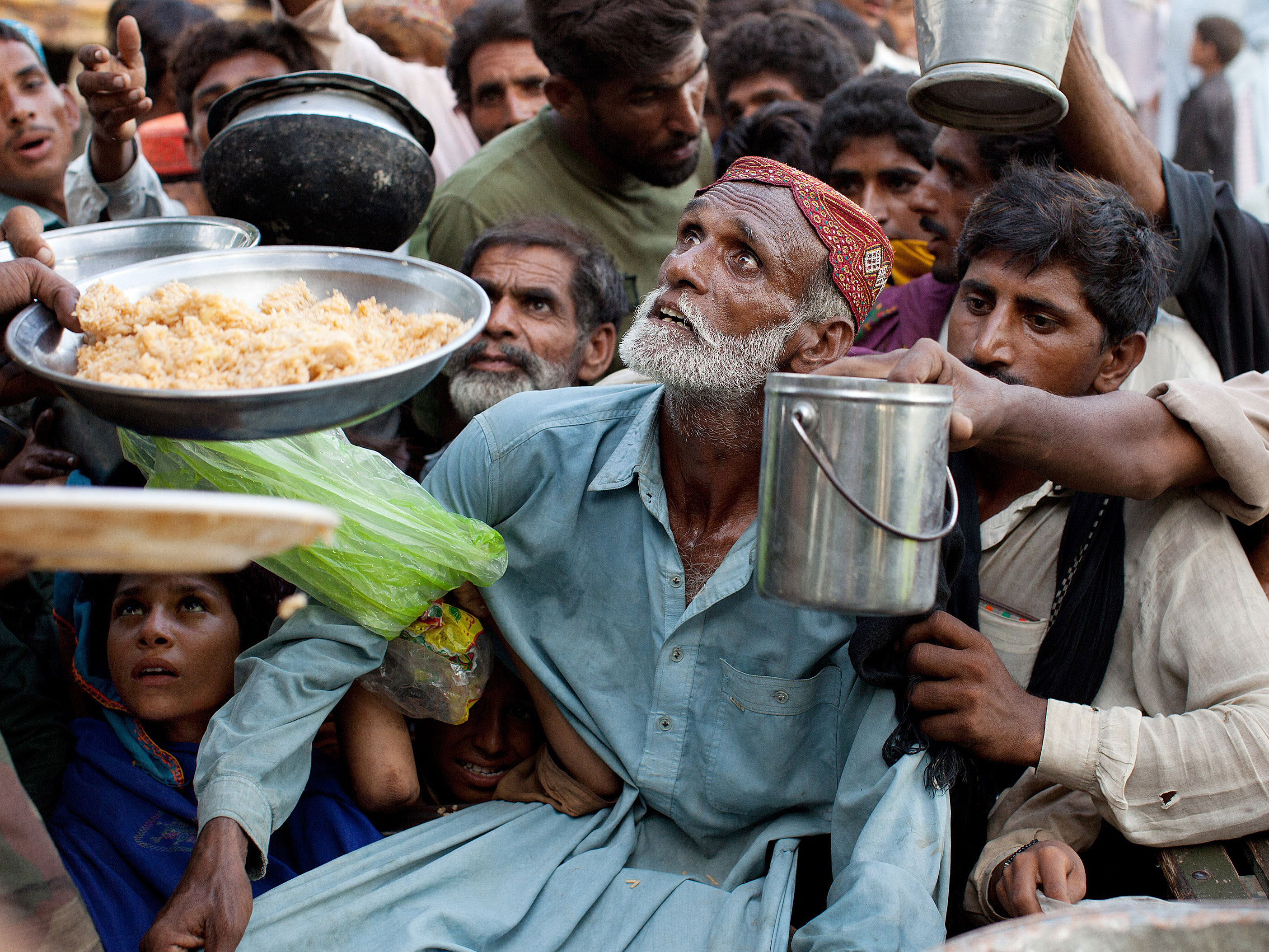 Desperate flood victims scramble for some food. The UN has described the disaster as unprecedented, with over a third of the country under water.

Mosharraf Zaidi has served as an adviser on international to Pakistan for the United Nations and European Union. He writes a weekly column for Pakistan's The News and blogs at www.mosharrafzaidi.com.

The United Nations has characterized the destruction caused by the floods in Pakistan as greater than the damage from the 2004 Asian tsunami, the 2005 Pakistan earthquake, and the 2010 Haiti earthquake combined. Yet nearly three weeks since the floods began, aid is trickling in slowly and reluctantly to the United Nations, NGOs, and the Pakistani government.

Why has the most devastating natural disaster in recent memory generated such a tepid response from the international community? Something of a cottage industry is emerging to try to answer this latest and most sober of international mysteries.

There's a degree of truth to all these explanations. But the main reason that Pakistan isn't receiving attention or aid proportionate to the devastation caused by these floods is because, well, it's Pakistan. Given a catastrophe of such epic proportions in any normal country, the world would look first through a humanitarian lens. But Pakistan, of course, is not a normal country. When the victims are Haitian or Sri Lankan -- hardly citizens of stable, well-government countries, themselves -- Americans and Europeans are quick to open their hearts and wallets. But in this case, the humanity of Pakistan's victims takes a backseat to the preconceived image that Westerners have of Pakistan as a country.

This unique stock of global expertise on Pakistan naturally generates a scary picture. Between our fear of terrorism, nervousness about a Muslim country with a nuclear weapon, and global discomfort with an intelligence service that seems to do whatever it wants (rather than what we want it to do), Pakistan makes the world, and Americans in particular, extremely uncomfortable. In a 2008 Gallup poll of Americans, only Afghanistan, Iraq, the Palestinian Authority, North Korea, and Iran were less popular than Pakistan.

The net result of Pakistan's own sins, and a global media that is gaga over India, is that Pakistan is always the bad guy. You'd be hard pressed to find a news story anywhere that celebrates the country's incredible scenery, diversity, food, unique brand of Islam, evolving and exciting musical tradition, or even its arresting array of sporting talent, though all those things are present in abundance.

Pakistan has suffered from desperately poor moral leadership, but punishing the helpless and homeless millions of the 2010 floods is the worst possible way to express our rejection of the Pakistani elite and their duplicity and corruption.

How bad is it? Well, in 2007, when the Pakistani cricket team's national coach, an Englishman named Bob Woolmer, was found dead in his hotel room, the first instinct of the international press was that a Pakistani team member must have killed him. This is the story of modern day Pakistan.

Contrary to what many Pakistani conspiracy theorists believe, the suspicion and contempt with which the country is seen with is not deliberate or carefully calculated. It's just how things pan out when you are the perennial bad boy in a neighborhood that everyone wishes could be transformed into Scandinavia -- because after 9/11, the world cannot afford a dysfunctional ghetto in South and Central Asia anymore. Or so goes the paternalist doctrine.

It is bad enough that the Pakistani elite don't seem eager to cooperate with this agenda of transformation; now, nature also seems to be set against it. The floods in Pakistan are the third major humanitarian crisis to afflict the country in recent years. The 2005 earthquake and the massive internal displacement of Pakistanis from Swat and the FATA region in 2009 were well-managed disasters, according to many international aid workers. While international support was valuable in mitigating the effects of those disasters, most experts agree that it was Pakistanis, both in government and civil society, that did the heavy lifting.

The 2010 floods, however, are a game-changer. The country will not and cannot ever be the same. The loss of life, disease, poverty, and human misery themselves are going to take years to overcome. But the costs of desilting, cleaning up, and reconstructing Pakistan's most fertile and potent highways, canals, and waterworks will be exhausting just to calculate. The actual task of building back this critical infrastructure is a challenge of unprecedented proportions.

Last week, I visited a relatively well-to-do village called Pashtun Ghari in Khyber Pakhtunkhwa province. Pashtun Ghari is right off the historic Grand Trunk Road, and less than two miles from the river. Flood victims there did not feel abandoned by authorities, indeed they were quite satisfied with how they had been taken care of. Still, there was inconsolable despair among residents. Why? The town's entire livestock population, some 2,300 cows, had perished beneath waters that stood more than 10 feet high in the first wave of flooding. Those cattle are both assets and income generators for Pakistani villagers along the Indus River. There is no recovering from losing that quantum of livestock.

The fact that people in other countries don't like Pakistan very much doesn't change the humanity of those affected by the floods or their suffering. It is right and proper to take a critical view of Pakistani politicians, of their myopia and greed. It is understandable to be worried about the far-reaching capabilities of the Pakistani intelligence community and reports that they continue to support the Taliban in Afghanistan. It is even excusable that some indulge in the fantasy that a few hundred al Qaeda and Taliban terrorists are capable of taking over a country guarded by more than 750,000 men and women of the Pakistani military, and the 180 million folks that pay their salaries.

But are the farmers of Pashtun Ghari, of Muzzafararh and Dera Ghazi Khan, of Shikarpur and Sukkur, really obligated to allay these fears before they can get help in replacing their lost livelihoods? Twenty million people are now struggling to find a dry place to sleep, a morsel of food to eat, a sip of clean water to drink -- and the questions we are asking have to do with politics and international security. The problem is not in Pakistan. It is where those questions are coming from.

Pakistan has suffered from desperately poor moral leadership, but punishing the helpless and homeless millions of the 2010 floods is the worst possible way to express our rejection of the Pakistani elite and their duplicity and corruption. The poor, hungry, and homeless are not an ISI conspiracy to bilk you of your cash. They are a test of your humanity. Do not follow in the footsteps of the Pakistani elite by failing them. That would be immoral and inhumane. This is a time to ask only one question. And that question is: "How can I help?"