Accessibility links
At The Movies, A String Of Futures Passed We're five years from the hover boards promised in Back to the Future. But wait, didn't The Terminator indicate that the apocalypse should have struck more than a decade ago? NPR's Bob Mondello looks back at some iconic visions of the future -- and notes that they say more about when they were written than about when they were set. 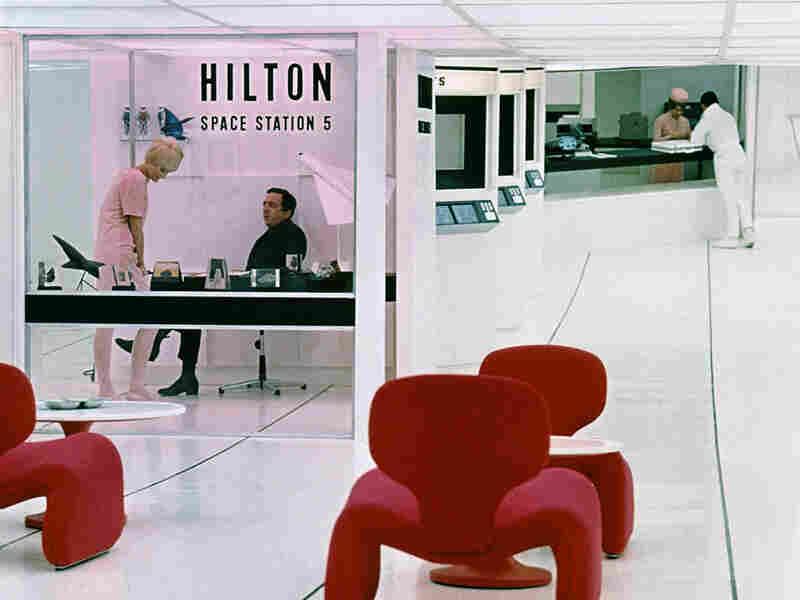 Suite '60s Space: Many once-groundbreaking visions of the future -- such as the space-station hotel of 2001: A Space Odyssey -- haven't quite come to pass. MGM/The Kobal Collection hide caption 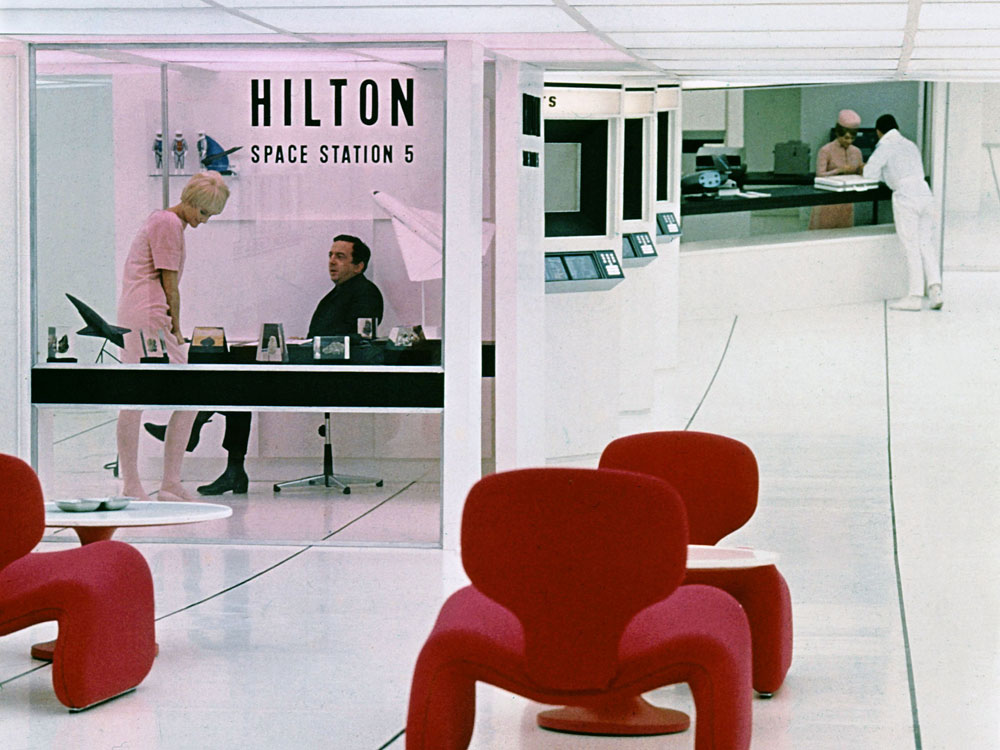 Suite '60s Space: Many once-groundbreaking visions of the future -- such as the space-station hotel of 2001: A Space Odyssey -- haven't quite come to pass.

The future is past. Or at any rate, the future that novelists and Hollywood screenwriters imagined for me in my youth is.

Growing up in the 1960s, my friends and I were as thrilled by 2001's HAL-9000 computer as we were terrified by 1984's Big Brother. George Orwell had told us 1984 would bring brainwashing; Arthur C. Clarke countered that 2001 would bring mind expansion. Back when I was a kid, it never occurred to me that I'd actually live through those years. But here we are; Big Brother is a TV show, and the year 2001's mind-expanding breakthrough was ... what, Shrek? ("Onions have layers. Ogres have layers. We both have layers.")

So much for '60s crystal-ball gazing. A generation later, '80s screenwriters gave us a whole new set of visions. Machines ran amok in Blade Runner and Terminator; kids skateboarded without wheels in the Back to the Future movies.

And now those '80s futures, too, are approaching their expiration dates. We're just nine years away from needing to worry about Blade Runner's replicants, and five from getting to test-drive Doc Brown's flying DeLorean. And Terminator? Well, the sequels have hedged a bit, but in the first two films, much of humanity was wiped out almost precisely 13 years ago. 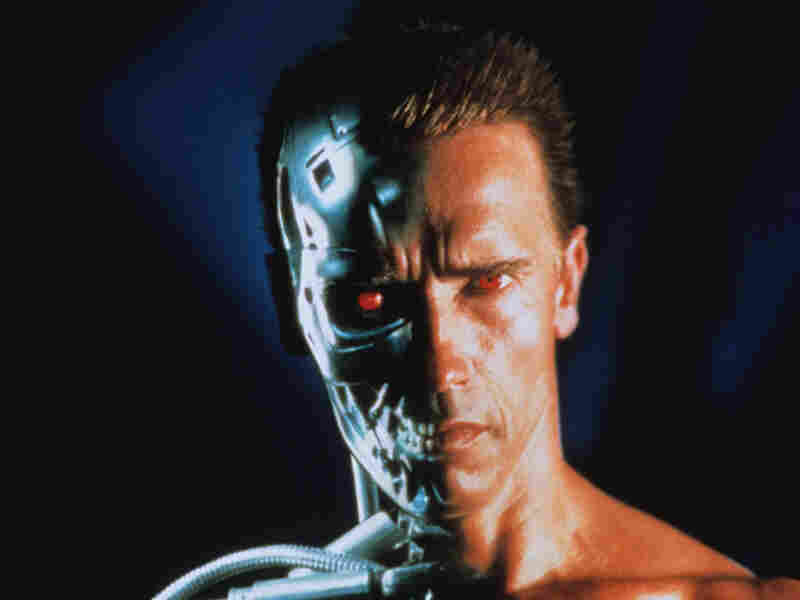 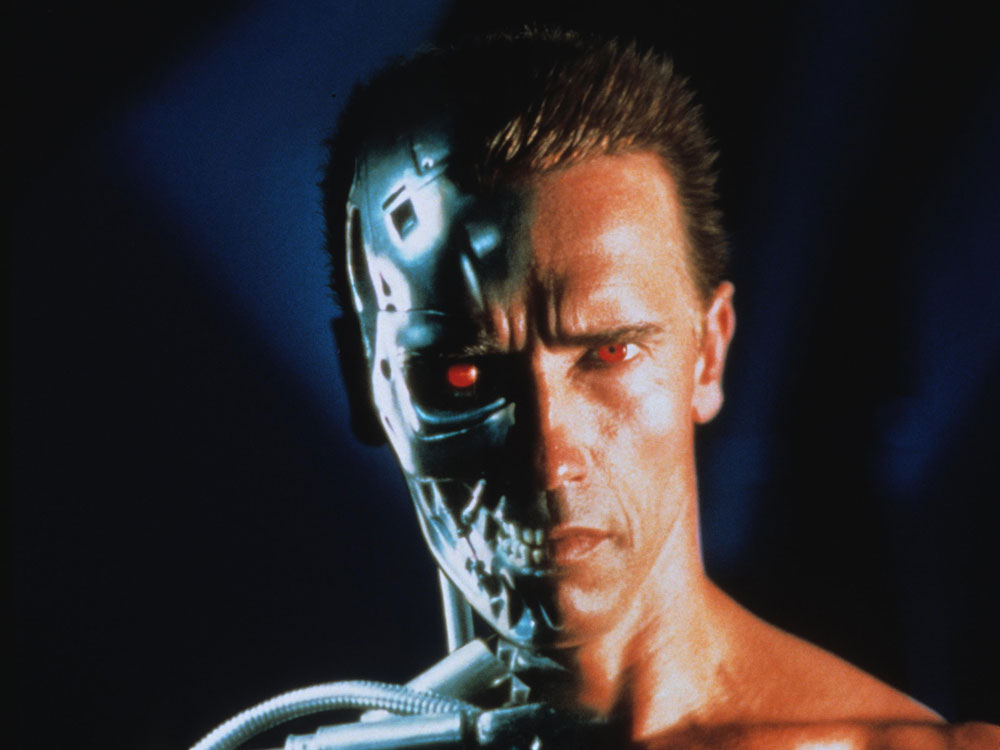 Apocalypse Then: Arnold Schwarzenneger first played The Terminator in 1984. The date proposed then for worldwide nuclear devastation: 1997.

Some of these once-visionary visions now look pretty quaint. We're far enough along now to laugh at 2001 when it shows a Pan Am moon shuttle with flight attendants serving zero-gravity meals -- as if either Pan Am or in-flight snacks would still be around in the space age.

Then again, some of the vision came true. Stanley Kubrick basically invented Skype for 2001 -- and he did it, remember, in 1968 -- so that a scientist could talk to his daughter from the space station.

No matter how accurate they may be, all fictional futures -- especially alarmist ones -- lose urgency as the concerns that fueled them fade. The Cold War paranoia of 1984 and 2001 now feel distant, even if the tech-boom fears in Blade Runner may be a bit more current. This decade, we're uptight about the environment and our increasing decrepitude, so we get Wall-E. In the flower-power era, we were skeptical about social conformity, so we got A Clockwork Orange.

Remember what Kubrick did in that film, to the super-contemporary housing complex where most of the muggings and gang fights took place? It was the sort of elegant, clean-lined architecture that sociologists were claiming in 1971 would make abandoned inner cities livable again. Kubrick showed what those clean lines would look like after a decade or so of neglect, mucked up with graffiti and broken windows. It was a neat visual shorthand for the limits of social engineering. 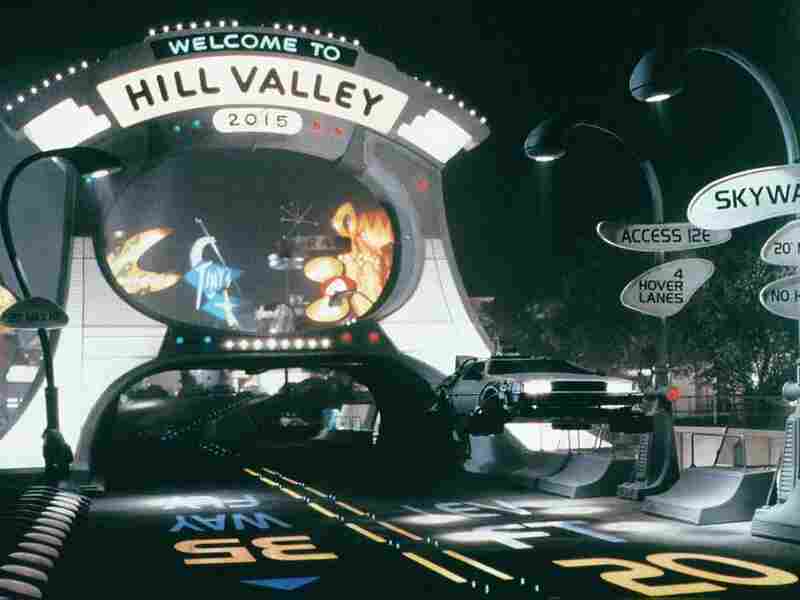 The Future Is Soon: The retro-futuristic 2015 setting of Back to the Future II is just a few years away. Will our hover highways be ready? Amblin/Universal/The Kobal Collection hide caption 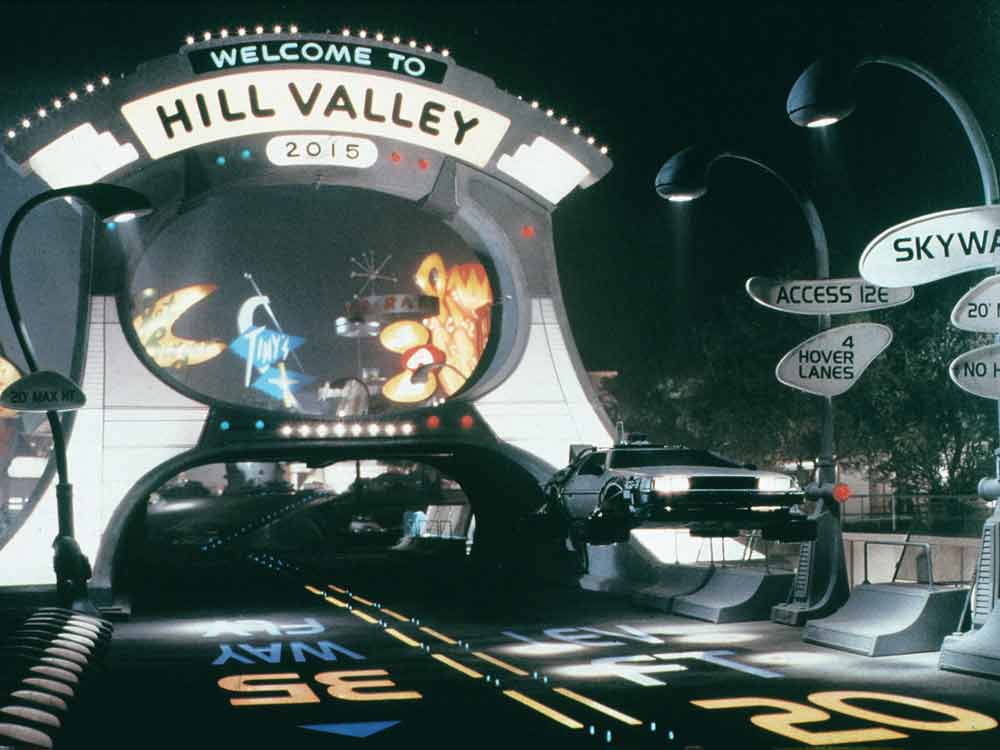 The Future Is Soon: The retro-futuristic 2015 setting of Back to the Future II is just a few years away. Will our hover highways be ready?

Kubrick is the same guy, remember, who had just made the future look so gorgeously pristine in 2001. But as time catches up with fictional futures, the one thing you realize is that they're never as nuanced as real life. They're all either light or dark, utopias or dystopias. Logan's Run, for instance, posits a 23rd century where people have expiration dates: You live a rigidly structured, apparently mindless life for three decades, and then as your reward for hitting 30, you're disposed of -- you're pretty much just human garbage.

It's undeniably downbeat. But all doom and gloom? Well, maybe for our great-great-great-great-great-great-great-grandkids, who'll never know the joys of a happy retirement. But if you're like me, you can still find a little cheer in even the direst future. In this case, I take comfort from the clothes. Judging from what everybody wears in Logan's Run, polyester is going to be very big in the 23rd century -- so apparently we 21st-century folks can stop worrying so much about running out of oil.