Accessibility links
Teary-Eyed Evolution: Crying Serves A Purpose We need tears to keep our eyes lubricated, but why should streams of salty drops spew forth from our eyes, blurring our vision and making our eyes puffy when we get emotional? Throughout evolution, tears may have added a new dimension to human communication. 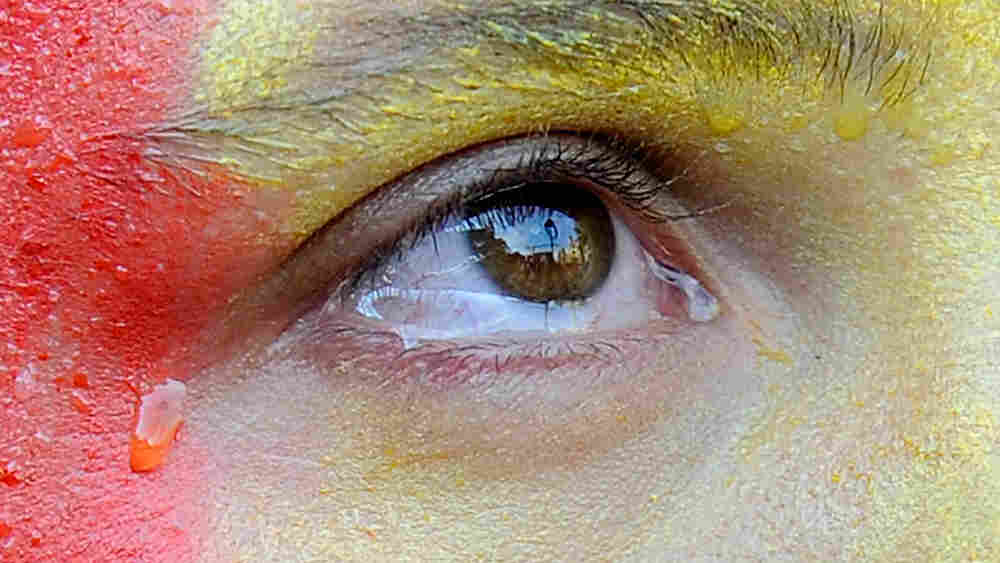 A supporter of the Spanish team cries while watching the World Cup final soccer match, which Spain won 1-0.  Crying may have evolved as a signal to those who were in close physical proximity to us, but it also adds a powerful dimension to interpersonal communication Dani Pozo/AFP/Getty Images hide caption

Many animals yelp or cry out when they're in pain. But as far as scientists can tell, we humans seem to be the only species that shed tears for emotional reasons. Scientists who study evolution say crying probably conferred some benefit and did something to advance our species -- because it's stayed with us.

Tears are universal. We need them to keep our eyes lubricated, but why on earth should streams of salty drops spew forth from our eyes, blurring our vision and making our eyes puffy when we get emotional?

One theory is that crying may have evolved as a kind of signal -- a signal that was valuable because it could only be picked up by those closest to us who could actually see our tears. Tears let our intimates in -- people within a couple of feet of us, who would be more likely to help.

"You can imagine there'd be a selection pressure to develop a signaling system that wouldn't let predators in on the fact that you're vulnerable," says Randy Cornelius, a psychologist at Vassar College.

Actors have a few tricks to help them cry on cue. A fresh, chopped onion can get the tear ducts going, and glycerin drops can help produce those big, beautiful tears that roll down the cheeks. Sometimes actors need these techniques because it's hard to cry unless you're really feeling something.

"Crying has to come from emotion, right? That's where we all cry from," says Jane Daly, an actress and acting instructor. She says tears come not only from grief or pain, but also from all sorts of other emotions, including joy and frustration. Tears can be cathartic and releasing. "It's what makes us human," she says.

Tears can play an important role in communication, and the extraordinary thing is that tears don't just telegraph our state of mind to others -- they can also evoke strong emotions in the people who witness them.

Randolph Cornelius, a professor of psychology at Vassar College, conducted a study to see what information tears themselves convey to others — a concept he calls “the signal value of tears.” Participants in the study were shown a photograph from a common source — a frame from a daytime television show or a scan from a newsmagazine — whose subject had tears in his or her eyes.  These images were then duplicated, with one version having the tears digitally erased, then shown to study participants who were told to evaluate what emotion the person in the tearful or non-tearful photo is feeling and expressing.

Below are three examples of images, with and without tears. 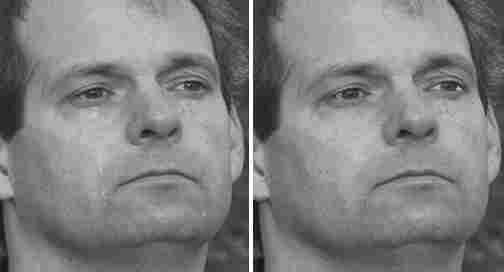 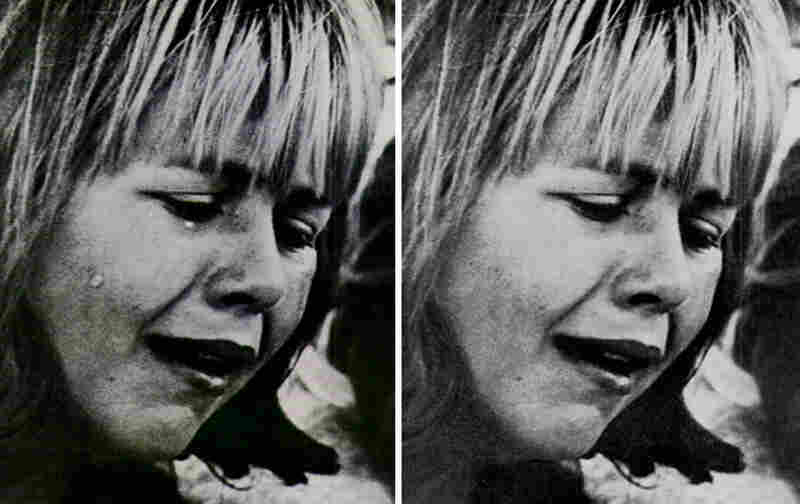 According to Cornelius: “The presence of tears dramatically increases the level of emotionality that people infer from the photo.  Tears also narrow the range of emotions people think the models are experiencing.  Tearful people are mostly seen as experiencing emotions in the sadness family (sadness, grief, mourning, etc.).”

Cornelius said in an email that tears convey “very specific information” about the emotional and interpersonal state of a person and how that person would like to be treated.  “Within the context of evolutionary theory, these results strongly support the notion that emotional tearing evolved as a system of communication that aids our survival by ensuring that others respond to us when we are feeling vulnerable and in need of emotional succor.”

We not only cry from our own pain, but we're moved to tears by other people's sadness, too. "I like to use the word empathy," Daly says, distinguishing that from sympathy. "With sympathy, we feel sorry for someone. But an empathetic person -- a lot of actors -- they feel the darn thing," she says.

She points to Tom Hanks' performance in the movie Saving Private Ryan, in which he played a World War II captain. She recalls the crying scene after Hanks' men have desperately attempted to save the life of the company medic.

"He just breaks down, sitting on an embankment on the side of a bridge, at another loss of a skilled, wonderful young man who barely had a chance to live," Daly recalls. "To see a grown man cry, it just brings you to your knees."

Watching the movie, we the audience feel it, too. Witnessing these tears, we get choked up. And this is because as humans, one of our signature abilities is that we're able to put ourselves in someone else's shoes to feel what someone else is feeling and predict how they might react -- something academics call having a "theory of mind."

The Power Of Empathy

"A theory of mind is something that even 4-year-olds have," says Jesse Bering, who directs the Institute of Cognition and Culture at Belfast University. "It basically means that you have a theory about the unobservable psychological states that are governing -- or causing -- other people's behaviors."

This power of empathy is huge, and it's fundamental to pretty much everything we do, from forming close relationships to living in complex societies. Bering says those of our early ancestors who were most empathic probably thrived because it helped them build strong communities, which in turn gave them protection and support.

Within these communities, Bering says, tears could be powerful tools. They did more than just signal vulnerability -- they were perhaps a way of keeping social and reproductive bonds strong. Maybe good criers were survivors.

"Crying seems to elicit compassion and guilt," Bering says, "and that itself may be an evolved mechanism to save relationships in distress."

He points to a recent experience after his partner cheated on him. "I mean, it was devastating," Bering says, "and I was convinced I was going to end the relationship right there." But many apologies into a long conversation, his partner began to tear up. "It wasn't a hysterical cry," Bering says -- his partner was trying to choke back tears. "When I saw him cry, I realized I was basically getting through to him."

Bering says he realizes that the tears did the heavy lifting here. The same conversation minus the tears may not have had the same effect.

This illustrates another aspect of crying -- whether it's intentional or unintentional, crying is a powerful way to get what you need or want.

Crying, whether intentionally or unintentionally, is a powerful way to get what you want.  And some evidence shows that natural selection favored infants whose cries were most alarming.  Above, an infant cries after receiving a measles vaccination in Manila. Noel Celis/AFP hide caption

Think about how babies get attention -- they cry. And there's some evidence that natural selection favored infants whose cries were most alarming.

"As a consequence, these babies -- who were our ancestors -- would have been less likely to find themselves left at home or with strangers," and theoretically less likely to be harmed, Bering says.

It's possible that crying may protect us throughout our lives. Just think how you react when someone starts to cry.

"It's hard to punish somebody or argue with someone who's crying," Bering says. "It's like a trigger that tells us to back off."

And here's the thing about tears: They don't often lie. Think about Tiger Woods and his public plea for sympathy after his extramarital affairs came to light. When he choked back tears, Men's Health editor Peter Moore says, we all knew where those tears were coming from.

"They're kind of shameful tears," Moore says. It's like saying, "I'm a dope, look at what an idiot I am, pity me," he says. "So, spare me. I'd just as soon draw the curtain over that one!"

Maybe that's another reason evolution kept humans weeping: Tears help reveal the truth. And that's because along with the tears, we've evolved a very sophisticated ability to interpret them.